The Superbike qualifying schedule was changed today due to lapped traffic causing competitors problems during practice. Superbike competitors were split into two groups, each group with a ten-minute session to decide their places on the grid. The slower half of the field formed Group B who were on track at 1340, followed by the faster Group A at 1355. These changes pushed Supersport 600 qualifying back to 1415 while the Supersport 300 category will now qualify much later at 1655 this afternoon.

That split certainly helped the lapped traffic situation but riders were still battling for track position and a clear spot on the track at any one time.

FP2 pacesetter Aiden Wagner was baulked by Ted Collins early on his first fast lap, but one rider that had perhaps been most frustrated by traffic in FP2, YRT’s Daniel Falzon, did get some clear track and along with team-mate Cru Halliday they were both straight down in to the 1m32.5s.

Wagner though was quicker again, his best of 1m32.191 was one of three 1m32 laps recorded by Wagner in the short ten-minute session. The privateer helping to cement a Yamaha 1-2-3 front row lock-out for the opening ASBK round for season 2019.

Josh Waters heads the second row alongside Troy Bayliss and Wayne Maxwell. Bayliss had suffered a huge tumble in FP2 that destroyed one of his two big twin Panigales, breaking his finger in the process to add injury to insult.

Mike Jones was the final rider in the 1m32s ahead of Troy Herfoss who was eighth on 1m33.03. Glenn Allerton and Bryan Staring rounded out the top ten ahead of young guns Mark Chiodo and Ted Collins.

The ASBK Superbike pole record stands at 1m32.096 and was set by Wayne Maxwell here last October on a YRT Yamaha YZF-R1M. The current race lap record belongs to Troy Bayliss, also set in October 2018, with a 1m32.194 on the DesmoSport Ducati 1299 Panigale R Final Edition. 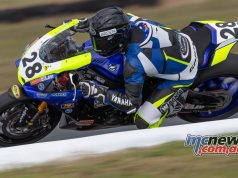 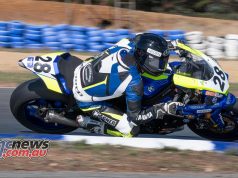