Final preparations are underway for the second event of Alex Gobert’s Road Race Performance Academy, to be held at Oran Park Raceway on the South Circuit in New South Wales on 20 October.

With less than two weeks to go before the Oran Park event, final entries are being accepted for participants to undergo the all-new professional rider training program headed by former Australian Superbike and American AMA Supersport contender Alex Gobert.

The 25-year-old launched RRPA earlier this year and had a successful start to the program at Wakefield Park last month, with general and media interest quickly increasing following the opening day.

Oran Park’s event will again see Fergusson attend the program, which will be held one day following the final round of the Australian Superbike Championship in Sydney.

Gobert has since been involved in a busy media campaign that has involved radio and print interviews as interest continues to surround Australia’s new era in sportsbike coaching.

Also on hand at Oran Park undergoing coaching will be teenager Josh Hook, who will be fresh back from a successful outing in the United States, where he took part in the AMA US Red Bull Rookies Cup trials at Barber Motorsports Park in Alabama.

Hook is proudly supported and guided by Gobert and RRPA as he chases his dream of becoming a professional road racer.

Oran Park’s event on 20 October will mark RRPA’s final event in New South Wales for 2008 before Gobert and the crew head south to Victoria to round out the year with events at Winton Motor Raceway on 11 November and Broadford’s State Motorcycle Sports Complex on 12 December.

Entry forms can be downloaded on RRPA’s official website at www.rrpa.com.au for those who are looking to improve their riding to become both more efficient and safer on the bike.

The entire program structure is detailed on the website and RRPA features sessions to accommodate everybody from track first-timers to experienced racers. The course provides a focused development program with limited numbers of riders per event, giving participants an exclusive training session with the RRPA coaches.

Features of the riding development program curriculum include world class techniques such as:
• Preparation — How to prepare for each track day or race day
• Corner Entry — Select your line and take the correct approach to the turn
• Mid-Corner — Learn to carry your speed and flow through the turn
• Corner Exit — Set up for a fast exit and stay on the correct line
• Braking — Brake smoother, later and with more control
• Shifting — Get crucial gear-shifts correct in to turns and on acceleration
• Throttle Control — How much and when to apply gas
• Body Position — Learn the correct body position for your riding style
• Visual Awareness — One of the most important aspects of riding is where to look
• Relaxation — Make the most of your riding by breathing and relaxing on the bike
• Health — We touch on the basics of how healthy living can improve your riding
• Safety — Safe riding is good riding. Safe riding is promoted on the track and street

Prizes will be awarded to selected riders who standout throughout the day — for development rate, safety and for concentration levels throughout the program.

ALEX GOBERT:
“We learnt a lot at the opening event last month and have revised the program quite a bit to ensure every participant can get the most out of their day. Needless to say, we are very confident of the program and very excited as we continue developing RRPA to become an essential part of rider training in Australia.

“The feedback following our first event was excellent, so I’m looking forward to helping even more people improve their riding at Oran Park in a couple of weeks. After that we will head down south to Victoria and I’m looking forward to those trips immensely. Interest has been high all around the country, so I look forward to releasing our full national calendar for 2009 shortly.” 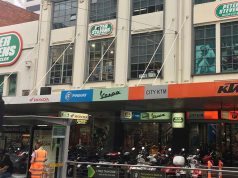