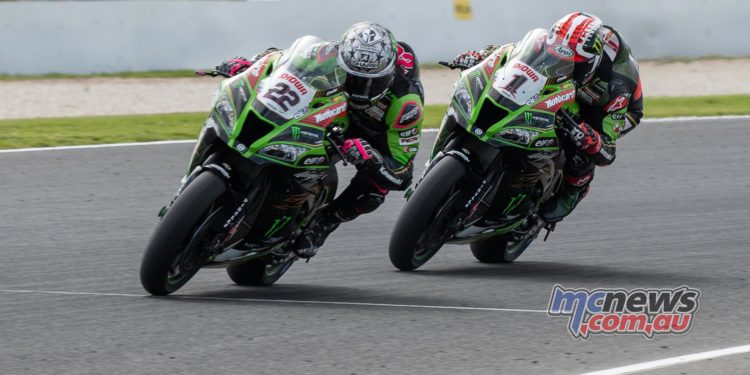 Not long after the third and final 22-lap race of the 2020 Superbike World Championship opening weekend at Phillip Island had come to its conclusion, in what had been a full-on drag race to the line that witnessed Alex Lowes taking the measure of his new Kawasaki team-mate and five-time WSBK world champion Jonathan Rea by just 0.037s, Rea thought a few things through.

“With Alex, it’s always a fresh experience when you have a new team-mate coming into the team,” offered Rea of his Kawasaki Racing Team team-mate for 2020 and beyond. “I think Alex is quite easy to get on with and he’s showing good potential and now he’s on one of the best bikes and on one of the best teams in the paddock.”

New to the Kawasaki Racing Team after six years of lining up for both Suzuki and Yamaha, and with previously only one race win coming his way at Brno in 2018, 29 year-old Lowes who placed a fighting third to rea and Alvaro Bautista in the 2019 WSBK title brawl, now goes to the starting grid armed with a works Kawasaki ZX-10RR.

And it is with that ZX-10RR that Lowes will fight team-mate and, arguably, the greatest WSBK racer who ever existed, Rea with. First, though, and like everyone else who might be scanning their eyes upon this piece, he’ll need to ride out the pandemic clampdown.

“Yeah, obviously, we’re in lockdown in England, so my wife Corinne and I leave the house for exercise or to go to the supermarket to get food, so we’re not doing too much,” said Lowes from his home in England. “It’s been four weeks like this. It’s a little bit of an inconvenience, but obviously we have to do it to try and get on top of the virus. Yeah, there is nothing to do. Obviously, we haven’t been able to ride since Australia. We can go and do some running and cycling outside in England, but it’s a little bit boring, really, because we’re itching to get back on the bike, but it is the same for everybody. We just have to be as positive as we can.”

Recently the organisers of the WSBK mooted that they will move forward, all systems go, with the aim of firing the season back up the first weekend in July at Donington Park in England. Having a date to hit, any sort of date, is music to Lowes’ ears, yet most everything is still in’ to be determined’ mode.

“Yeah, because you’re always working towards something, but at the minute, we don’t know if it’s going to be a few weeks or a few months,” Lowes explained. “We don’t really have that information. That’s always the hardest thing – when you’ve got no deadline or no plan or something you need to get done. Like in school when you get homework and it is due on Friday. Yeah, you might do it later, but at least you know you need to do it. At this minute and with our racing, we just don’t know.

“I’ve stayed in close contact with the team,” continued Lowes. “We speak once or twice a week on FaceTime with a big group chat, which has been quite good. We’ve been able to speak and to see how everyone is getting on. Obviously, we’ve got mechanics in Spain and Italy. Our crew chief is in Holland and we have other guys working, so we’re spread around Europe and we’ve been catching up and I’m trying to see how the situation is in each different country, but it has been nice to see them going and obviously it would be nice to see them in person as soon as possible.”

Meanwhile in England, Lowes’ brother Sam is also holding station in beating back the COVID-19 darkness and it is there that Alex is keeping an eye on his twin brother and Team Estrella Galicia 0,0 Marc DVS Moto2 racer Sam.

“Yeah, my brother is actually living really close now,” pointed out Lowes. “He lives near the Isle of Man, so he’s just around the corner from me. I’ve spoken with Michel Van Der Mark a few times as we were fairly close after three years together at Yamaha as team-mates and we were friends, as well. After that, no, not really. I’ve just been sort of enjoying some time at home and spending some time with the wife. We’d certainly rather be getting out doing some things, but I think we have another three weeks in lockdown here in England. We still have to be patient.”

Lowes has also been working together, on and off the racetracks, with the sensational Jonathan Rea, a racer going after his sixth straight WSBK title.

“I’ve always gotten on with Johnny well and you don’t need to say anything about his results as he’s a guy to beat, it’s been really nice. The team is fantastic and I really enjoy the team and if Johnny and I get on, it makes it a lot easier and better for everybody, so the dynamics with the team have been really good. It’s been a lot of fun so far.”

169 races, 22 podium finishes and two wins into his WSBK career, Lowes talked about the new reality of his racing surroundings, the Kawasaki Racing Team member quite enthused by his team and their way of doing thing.

“Yeah, definitely, Eric, it has been an eye opener for me with how well them guys do things and I definitely feel like all of that is going to help me make a good step forward with my riding and my results,” said Lowes. “Like I’ve said, it has been very positive and I’ve really enjoyed working with and getting to know all the guys, obviously Jonathan included. He does a lot of things really well, so I’m sure there is plenty that I can learn from him. Obviously, we’ve got a delayed start now, but the testing the first three months together have been really, really good.

“Even this winter, and even though I felt good on the bike, we didn’t have too good weather, so I didn’t get too many dry laps, so I feel like there is a lot more I can improve on with my relationship with the bike. I’m real confident with my decision with Kawasaki and I’m happy to be working with all the guys, and like I said, whether it is next month or two months or whenever the time is, I’m surely going to be at the front. That’s all you can ask for as a rider and it has given me a lot of motivation.”

All things – and all three races – considered, the season opening race weekend at Phillip Island went quite well for Alex Lowes and his ZX-10RR. Lowes was second by a mere 0.007 seconds to Yamaha’s Toprak Razgatliouglu in race one, fourth in the Tissot Superpole race to Rea on Sunday morning, and won the spectacular third and conclusive race in a straight-up dogfight with Rea chasing him hard all the way to the flag.

“Yeah, it went well. I felt good on the bike during all the winter testing. In Australia, I worked really hard during the test and on old tyres because there is something about tyres and being fast at the end of the race at Philip Island. For me, the homework paid off. Marcel, my crew chief, and I had a really good plan during the test, we work well together and it was just nice to get a couple of podiums and grab the first win early in the season and so I’ve got all of that off my back now and I can just enjoy it when we do get back to racing again. I’m just going to try and be as consistent as possible and want to fight for more wins every weekend. Yeah, Australia was fantastic and I couldn’t have asked for anything more from my first weekend with the new team.

“As far as how I saw the competition in Australia, we knew what the Ducati is if you look at what Bautista did last year. The Ducati guys are going to be strong. Honda coming back as a factory team is great and they’ve got a couple of strong riders. Van Der Mark I know him very well from over the last few years, so he is going to be strong as well as so is the entire Yamaha team. And Jonathan has always been on the Kawasaki and we have seen what he has done. The frustrating thing right now is that we are having some of the best racing that we’ve had in World Superbike and the closest competition so it is such a shame we can’t be out there every weekend putting on a show for all the fans because it is so much fun to be involved in World Superbike.”

So Alex, can you do it? Can you ultimately win the WSBK World Championship?

“Yeah, that’s my goal and my dream and it’s one of the reasons I wanted to join the Kawasaki team. I wanted to go up against Jonathan on the same bike. Yeah, I believe I can be World Champion. I still have a lot to learn and a lot to improve, but with these guys around, I know I can do it. It’s going to be about being patient and understanding that it is still going to be my first year on the Kawasaki. Even if it ends up being a champion next year, I can’t expect too much. I want to be consistent and fight for wins wherever I can. The belief is there. The motivation is there. I’m just excited to get back and see the guys and get riding again, but right now we have to do the right thing and stay at home and that’s it! There’s not much else to say, really!”