BMW Motorrad France Team Thevent head to this weekend’s 8 Hours of Oschersleben, the fourth and penultimate round of the 2012 Endurance World Championship, determined to secure their second win of the season.

After a decisive victory at the 8 Hours of Doha in June, Sbastien Gimbert, Erwan Nigon and Damian Cudlin were cruelly denied an historic podium finish last time out at Suzuka, after an electrical fault saw them drop from second to ninth in the final 30 minutes of the race.

It was disappointing result for the team, but with the series leader crashing out of the race in Japan, a finish inside the top ten was enough to see BMW Motorrad France Team Thevent close to within 13 points of the top of the championship standings.

With just 20 points separating the top five teams on the leader board, and with 35 points on offer to the race winner in Germany, this weekend’s 8 Hours of Oschersleben could well prove the decisive confrontation in this year’s championship battle.

And it’s a battle from which Gimbert, Nigon and Cudlin are determined to emerge victorious, as they aim to give the BMW S1000RR it’s first race win on home soil at the Motorsport Arena Oschersleben this weekend.

Sbastien Gimbert: “My last stint at Suzuka is not something I want to repeat in a hurry, but ninth place was important as it meant we closed the gap on the championship leaders to just 13 points. This weekend in Germany our priority is to close the gap to SERT even further, or even eliminate it completely. We need to go into the final round at Le Mans as close to the top of the standings as possible if we are to give ourselves a fighting chance of winning the championship. It means we head to Oschersleben with a clear aim for the weekend ahead; to win the race and claim maximum points. We have the fastest bike, a strong rider line-up and an experienced team behind us, so there’s no reason why we shouldn’t repeat the success of Qatar this weekend in Germany.”

Erwan Nigon: “We must go to Oschersleben and push for the victory if we want to fight for the championship at Le Mans. We can’t afford to aim just for the podium, or for the top five; our objective must be to win the race. We saw in Suzuka that the bike, the riders and the team were all strong and it was only bad luck that cost us a place on the podium. The Oschersleben circuit should be good for us also, as Damian has previous experience there and I won an IDM Superbike race there back in May. After the disappointment of Suzuka we’re ready to win in Germany and then take the fight for the championship to the last round at Le Mans.”

Michael Bartholemy: Team Principal
“Oschersleben is an important race for BMW Motorrad France Team Thevent, for a number of reasons. Firstly, a win this weekend would put us in a very strong position going into the final round of the series at Le Mans, where the championship will be decided. Secondly, could there be a better way for us to thank BMW for their unstinting support this season than to win in Germany? I think not. We know we have a very competitive set-up for 8-hour racing – a very fast bike, three strong riders and an experienced team – so I think another race win is a realistic goal this weekend.”

Following its impressive top ten finish at the legendary Suzuka 8-hour last week, the Honda TT Legends team will this week travel to Germany for the penultimate round of the 2012 World Endurance Championship – the Oschersleben 8-hour.

The Honda TT Legends have completed every race so far this year with impressively solid performances that have placed the team second overall in the EWC standings, just five points behind championship leaders SERT. The Oschersleben race presents a pivotal stage in the season as the top teams battle it out for all-important points in the fight for the title crown.

Honda TT Legends’ John McGuinness and Cameron Donald will be joined once again by Samsung Honda British Superstock star Jason O’Halloran, who is standing-in for injured regular rider Simon Andrews. Both McGuinness and O’Halloran took part in a test at the 3.7km German circuit just last month and the whole team is feeling confident ahead of this weekend’s eight-hour encounter.

Neil Tuxworth – team manager
“For the Oschersleben race we will once again replace Simon Andrews with Jason O’Halloran as Simon continues to recover from his Isle of Man TT crash. We will therefore be running the same rider line-up in Germany that we ran in Japan. All three riders have proved their confidence in endurance racing and we will be looking to bring home a successful result in Oschersleben to at least maintain second position in the EWC standings. We had a successful test at the circuit a few weeks ago, so we are already ahead of the game in terms of familiarisation and set-up, so let’s see what the weekend brings.”

John McGuinness
“After Suzuka we’re in a really good position going to Germany and this round is going to be an important one for everyone. We’ll all be after the points and although we’ve done a great job so far, we can’t get too comfortable. It’s a new track for us in terms of the race, but we have tested here so that gives us a good start. The bike has been working like a dream and the crew are as good as ever so I’m confident that we can do a solid job and maintain our position ahead of Le Mans.”

Cameron Donald
“Life is a racing whirlwind at the moment, with Japan one week and Europe the next! After a strong result in the tough conditions of Suzuka I’m looking forward to building on that bike time at Oschersleben this week. The team is working well and we all want the same result from this next round of the championship and I can’t wait to get going as we keep pushing to improve our championship position. This will be the first time racing at Oschersleben for John, Jason and myself so that always adds some extra excitement. After seeing how well the lads rode last week I know I have two of the best team mates I could ask for. Bring it on!”

Jason O’Halloran
“I’m really looking forward to this race. I’ve worked with the team twice now so it’s all feeling a bit more familiar to me. We tested here a few weeks back too so I’m going into this one a step ahead, unlike Qatar, which was a brand new track for me, and Suzuka, which I hadn’t ridden for a few years. The team is only a few points off the championship leaders so I think we’re all looking forward to seeing if we can close that gap a little before the team heads to Le Mans for the final round.”

The Oschersleben 8-hour race will take place as part of the 15th German Speedweek – a week-long motorcycling festival at the Motorsport Arena Oschersleben. The race still begin at 14.00 (CET) on Saturday 11 August.

Suzuki Endurance Racing Team will start this weekend’s fourth and penultimate round of the 2012 Endurance World Championship at Oschersleben in Germany with a narrow five-point lead over Honda’s TT Legends.

Reigning World Champions SERT and riders Vincent Philippe, Anthony Delhalle and Yukio Kagayama saw its lead cut in half after crashing the French-run GSX-R1000 at last month’s Suzuka 8-Hour race in Japan while challenging for the lead; although the team scored some valuable points after getting back into the race and climbing up to 15th position.

The 3.6 km circuit in northern Germany will see 31 teams lining up for the Oschersleben 8-Hour race on Saturday; and with just 11 points separating the top three teams – SERT, Honda TT Legends and Yamaha France GMT94 – will be an exciting and crucial race in the season, which culminates at Le Mans in France on September 9th. And with 35 points being awarded for the victory, rather than the normal 25 points, fourth-and-fifth-placed BMW Motorrad and SRC Kawasaki are also still in contention to fight for the title; both within 20 points of 11-times World Champions SERT. 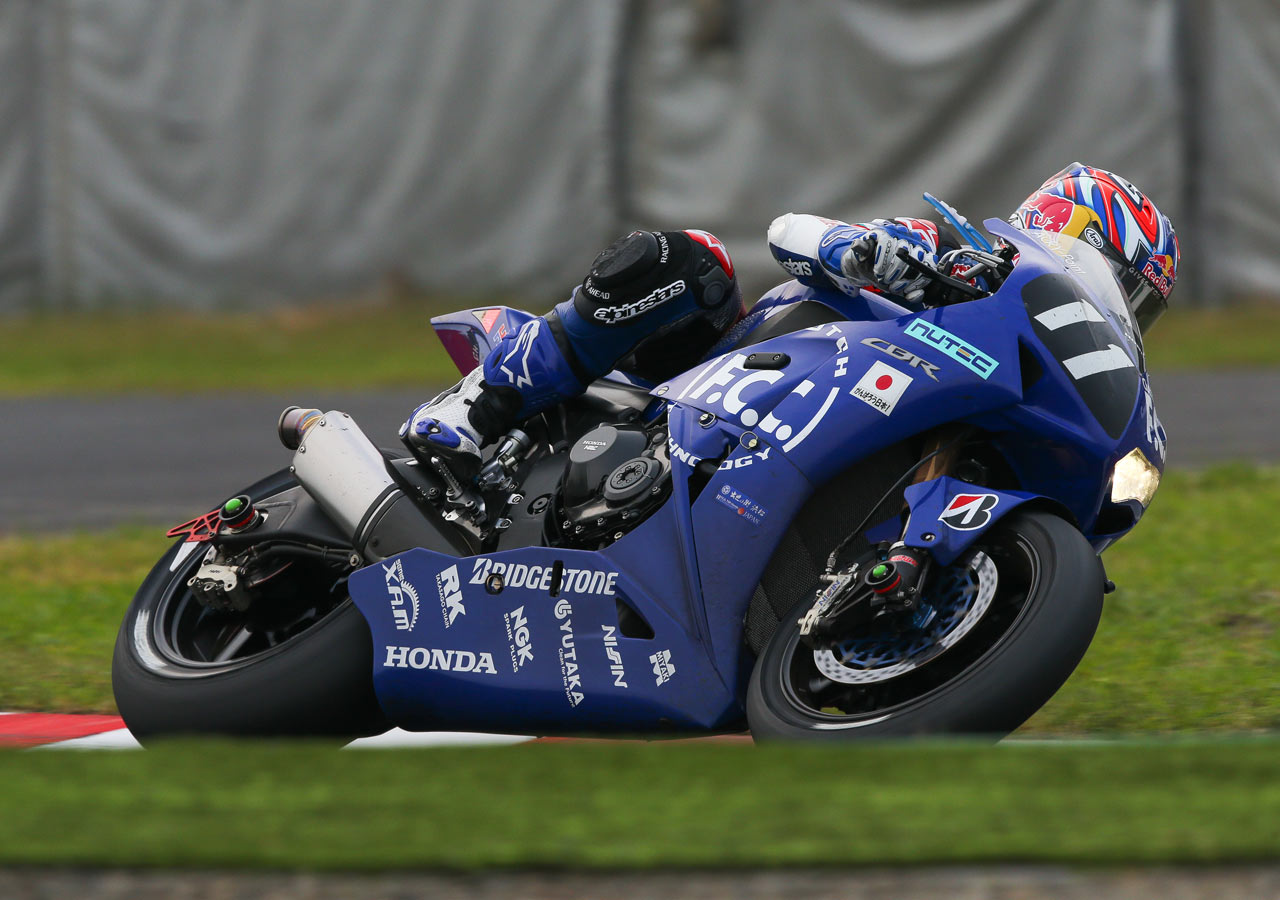