by Trev
in Benelli, Benelli News, Benelli Reviews, Latest Bikes
A A
Share on FacebookShare on TwitterShare

Images by Ben Galli and Benelli

The original Leoncino, or Lion Cub, was Benelli’s first post World War Two machine. Our own MCNews.com.au expert on all things European when it comes to motorcycling history, Phil Aynsley, explains further.

Benelli is the oldest European motorcycle manufacturer still in operation. Established in 1911, firstly as a repair business for motorcycles and bicycles, Benelli then started producing its own machines later that same decade. The first Leoncino model came to pass in 1951, with a 125cc 2-stroke featuring very distinctive egg shaped crankcases inclined at 45 degrees.

A nice touch was the aluminium lion ‘mascot’ mounted on the front mudguard, and this is incorporated in some models right through to today. A Benelli Leoncino, ridden by Leopoldo Tartarini, won the inaugural 1953 Motogiro d’Italia, beating the 175 MV Agusta in the process.

The 4-stroke version, also a 125cc, was released in 1956 and retained the same shaped crankcases, but the look was now enhanced by the prominent alloy cover over the cascade of gears driving the single OHC.

It was available in Normale (6 hp with a 90 km/h top speed) and Sport (7 hp / 105 km/h) versions originally but eventually 13 different models, including a scrambler based on the Nuovo Leoncino, were offered. In 1959 the OHC motor was replaced by a cheaper OHV model. Over 72,000 of all versions were manufactured over a twelve year period.

Back to the future…

Thus the Leoncino does have a little off-road history to go with the road race success, and the new for 2018 Leoncino Trail aims to rekindle those scrambler style pretensions with a modern iteration. These days, however, Benelli machines are made by Qianjiang in the Chinese industrial city of Wenling, rather than by Italians in Pesaro.

Qianjiang, or QJ as it is largely referred to, is no small player. Along with partner Geely, the Chinese conglomerate purchased Volvo some years ago, and has taken the Swedish brands to new heights of sales success and profitability. For Benelli, the QJ is a marriage of convenience, and necessity if they are going to bring products to market at a palatable price.

The Leoncino was designed by Stefano Casanova, seriously, and yes he is a ridiculously good looking Italian. Current day Benelli machines are still largely designed and developed in Italy before QJ then take charge of the mass production process.

It’s a modern Euro4 spec’ powerplant with four-valves per cylinder and double overhead cams. The 69 mm piston slides through a 66.8 mm forward canted stroke towards a 11.5:1 compression ratio.

It is based off the 302 engine design that came into production in 2015 and uses a 360-degree crankshaft. That firing interval is somewhat unusual in a parallel twin and endows the engine with a very retro like character that mimics an early British twin, rather the pseduo v-twin simulation that has become the norm for contemporary parallel twins. A counterbalancer helps quell vibrations and the engine is quite smooth as a result.

The throttle action is via a conventional cable and feels natural and smooth in the way it controls the EFI system’s 37 mm throttle bodies. Benelli have come a long way since the previous generation machines in regards to throttle response.

Nods to potential off-road use start with a move to a 19” front rim shod with dual-purpose tyres, a reasonable 135/138 mm of wheel travel, and realistic 185 mm of ground clearance.

Considering those numbers, the fact that Benelli has managed to retain a relatively low 825 mm seat height is pretty good going and while at first glance the ergonomics of the machine look a little awkward, in reality the Leoncino Trail actually feels pretty natural. Another welcome surprise and one that will allow full use of the 12.7-litre fuel tank between stops.

It rides well enough too. The 50mm upside-down forks and the preload adjustable lay-down rear shock are both adjustable for rebound damping. Both ends handled my bulk surprisingly well, even decent hits off-road did not see the shock completely blow through its stroke to the stops.

It did hit the limit of travel, but received those hits with more control than I had expected. It’s certainly not high quality suspension, but this is a bike that retails for less than 10k, and taking that in to account, I can’t be too critical. A thoughtful inclusion though is the convenient hand-wheel to adjust the rear preload.

Off-road the 19” rim is a god-send. The Leoncino Trail looks as though its off-road capabilities should only extend as far as the sidewalk, surprisingly though that larger diameter front rim endows the 207kg (wet, full tank and ready to ride), machine with the front end stability to cope with rough terrain.

To me, it is still a city bike, but that taller front hoop does give it some real off-road chops and lays the foundations to ensure that as far as all this modern retro scrambler genre goes, Benelli have actually given the Leoncino Trail some real off-road purpose.

Geometry has also been lengthened to further aid off-road stability via altered trail and rake, but the wheelbase is marginally shorter than the Leoncino model the Trail is derived from.

Pulling out the stops…

Surprisingly, the Benelli has a twin-disc front end, and two large 320mm discs at that. The twin-piston calipers are plumbed to a contemporary Bosch ABS system. That notwithstanding though, the brakes require more effort at the span-adjustable lever than I would prefer.

Sure, this is a machine aimed at new riders, and they don’t have the deftest of fingers, but a hard, let alone emergency stop still requires too much lever effort in my opinion. A 260mm disc at the rear plays a minor supporting role, but a non speaking one…

The ABS is switchable and easily switchable at that. A simple extended press of a dedicated button on the bars turns the systems on or off. Simple and convenient. There is no traction control system, cruise control or heated grips.

The six-speed gearbox works as intended and the cable clutch is certainly light enough.

LCD instrumentation clearly displays the information you need to know. At first the display seems a little avant-garde but it proved quite functional and left me with no cause for complaint.

The most handsome profile of the Leoncino Trail is most certainly front-on. The LED headlight makes a statement and the bike looks sleek and lithe. Side on I can’t say I am all that struck on its looks but hey, I am not the intended market for such a machine.

At $8690 the Leoncino Trail commands a $700 price premium over the regular Leoncino. Benelli include a two-year warranty and roadside assistance package and the Leoncino Trail is available in red, silver or black. No fancy names for the colours, just those three simply named hues.

There is also a Leoncino Sport on the way and a range of larger 750cc capacity machines coming from Benelli in the near future. I have pretty much dismissed this brand before, but it seems that now they really are going places. That whole Italian-Chinese marriage is now producing some viable offspring.

In Australia Benelli is distributed by Urban Moto Imports, a Melbourne based outfit that also has MV Agusta and Gas Gas in their stable of brands. There are only 11 Benelli dealerships in Australia, two in most states but a single outlet in the ACT, WA and Tasmania. Benelli currently has no presence in the Northern Territory. 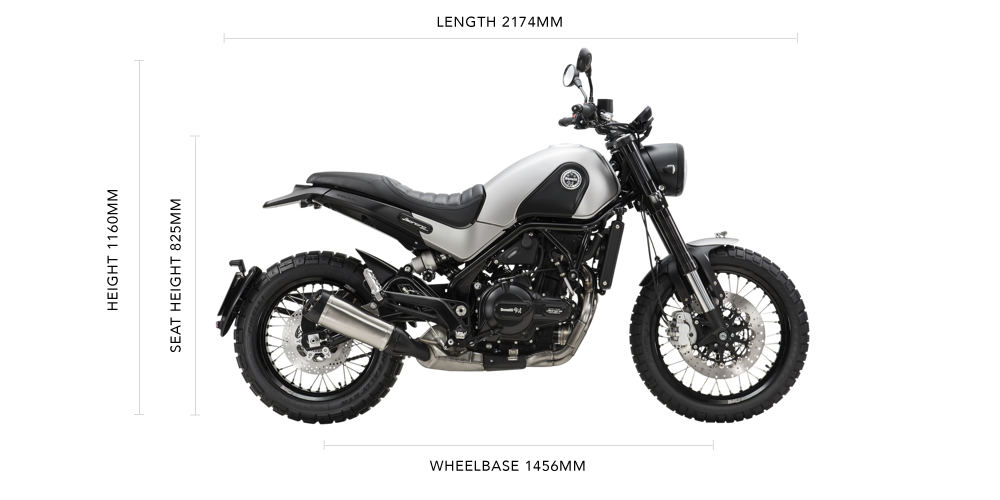