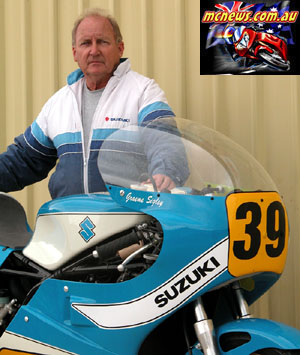 Graeme Sigley and his pristine 1978 RG500 Suzuki ventured out of retirement at a recent ‘Historics’ meeting at Wanneroo Raceway.

Both Graeme and his machine have a good pedigree. Graeme won 13 road race state titles during the seventies, including the 1979 WA ‘500’ and’Unlimited’ duo aboard the machine you see in these images. Graeme also came 2nd at the Bathurst based Australian GP in 1979, where he was clocked at 173.8mph on the RG, an incredible 280kph in the modern measurement.

Graeme’s Suzuki is a 1978 RG500 MK3; the only one of it’s kind brought in to Australia that year. The machine has engine #56, out of a total number of around 60 that were produced.

Graeme gave the racing game away in 1980 and the RG headed to an Eastern States buyer. Since then the rotary disc valve two-stroke has changed hands a couple of times, before Graeme tracked his old beast down in Melbourne last year. After purchasing his old steed Graeme set about a steady restoration process to return the Suzuki to it’s former glory.

Firstly the machine was methodically disassembled before repairing some parts, and replacing others. Of course with a machine of this vintagetracking down components is not as easy as just popping down to your local Suzuki dealership. Graeme even had to get some of the original stickers faithfully replicated to give the machine that completely authentic touch.

The result is truly stunning. Nobody could walk past this machine without stopping for a second, or even third, look. Even those whose interest is not normally sparked by machines of yesteryear stand amazed by the beautiful simplicity of the factory GP racer from nearly 25 years ago. It is just like the ‘factory’ Suzuki Barry Sheene raced against the yellow and white Yamaha ridden by Kenny Roberts in the 1978 World Motorcycle Championship.

No modern made ‘retro’ motorcycle could ever hope to look as good as the original thing.

Rossi - A little more of an insight to the World Champion

It’s official, no WorldSBK at Phillip Island this year

Fancy having a crack on a racing sidecar? Here’s your chance…