BMW Motorrad are heading to the Custombike-Show held in the East Westphalian town of Bad Salzuflen in Germany, with the Concept R 18 /2 and R5 Homage in tow, with a thousand custom machines from 300 firms expected to be on display.

For the seventh time, BMW Motorrad is highlighting the customizing potential of its models in cooperation with selected customiser garages. With a total of 11 models, the entire customising range will be on show at the stand of BMW Motorrad extending over an area of approx. 180 square metres – from the individually customised series production bike to true custom bike treasures requiring a great deal of craft skills.

The highlight is the new BMW Motorrad Concept R 18 /2, which, following its digital presentation at the EICMA, can now be experienced exclusively at close range. With the modern custom cruiser, BMW Motorrad adds a new facet to its heritage concept.

At the Concorso d’Eleganza at Villa d’Este on Lake Como the BMW Motorrad Concept R 18 celebrated its much acclaimed world premiere. Now BMW Motorrad is showing the second sensational Concept Bike based on the Big Boxer at the Custombike-Show.

The BMW Motorrad Concept R 18 /2 is the stylistic counterpart to the Concept R 18: a modern, dynamic custom cruiser with a somewhat rougher performance appeal.

The show also features the BMW Motorrad R 5 Homage, which represents the history of the brand. Other accents are provided by selected “SoulFuel Bikes”, converted bikes by renowned customisers based on current as well as earlier BMW motorcycles.

The Maximator based on the BMW R 1200 C is another highlight. The custom bike was built with meticulous manual care by the BMW Motorrad development engineer Ulf Musekamp, who was also involved in the realisation of the BMW R nineT family.

The Type 18 models from customiser Auto Fabrica, Achilles von Kraftstoffschmiede, the winner of the Factory Class Sultans of Sprint and other exciting R nineT derivatives round off the portfolio at the BMW Motorrad stand.

In addition, the BMW Motorrad Concept R 18 /2 is exclusively showcased on the presentation area of the Custombike-Show at the following times: 6 December at 4.30pm, 7 December at 12.09pm as well as 8 December at 11.30am.

All this and a great deal more awaits visitors from 6 to 8 December 2019 at the Custombike-Show in the Bad Salzuflen trade fair centre. Opening hours are: Friday from 12pm – 8pm, Saturday 10am – 6pm and Sunday 10am – 5pm.

BMW Motorcycle News - January 14, 2020
BMW Motorrad sales up 5.8 per cent in 2019 In 2019 BMW Motorrad sold more motorcycles and scooters globally than ever before. Compared to the...
Read more

Features Motorcycle News - January 5, 2020
BMW Boxer Engine Centenary Martin Stolle was a talented young engineer in the development department of BMW and he was having great fun riding his...
Read more

BMW Trevor Hedge - November 30, 2019
BMW Big Boxer BMW has let some detail out of the bag about the new generation Big Boxer that will power a new cruiser range...
Read more

BMW Motorcycles and M cars together for P.I. customer day

New Products Motorcycle News - October 16, 2019
BMW Motorrad Heritage collection announced for 2020 BMW Motorrad have announced they will be expanding their involvement in the Heritage segment and launching its own...
Read more 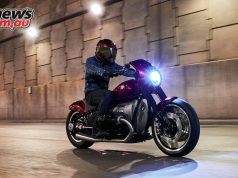