MCNews.com.au covered 1100km around Tasmania on BMW’s new for 2014 R 1200 GS Adventure, half of which was off-road on a variety of surfaces and terrain. We then jumped on the overnight ferry to Melbourne to put the big Bavarian through its paces on the more mundane interstate highway haul to attend the opening round of the Swann Australasian Superbike Championship at Wakefield Park. After tallying up around 3000 km across three States and a Territory in the space of a week, it’s clear that no other motorcycle in existence, in standard trim, straddles all these duties as well as the R 1200 GS Adventure. In fact, that statement is so clear cut that it is not even worthy of debate.

That said, it’s fair to say the big GS Adventure is a daunting prospect to the uninitiated. I have racked up a great deal of experience on these big brawlers over the last decade and am thoroughly convinced of their charms, but after not riding an Adventure for a while, even I must admit to a fair degree or trepidation, bordering on fear, when initially confronted with the challenge of riding such a huge machine.

Once up and running on board though that trepidation quickly melts away your fears as you succumb to its charms and revel in the surprisingly light handling. Off road, of course, it takes a little longer to allay your fears, but within 50 km of hitting the dirt I was back in the swing of things, sliding the Adventure through every turn. By the end of that first day my confidence was high enough to be the first of the assembled journos game to hit the beach at Strahan.

Early on day two I also volunteered for the couple of optional special test sections which included some mud filled ruts along with some slippery ascents and descents to keep us on our toes. I am not a Pro enduro expert in the technical stuff by any stretch of the imagination, so again it was a case of steeling myself for each task as it presented itself, using willpower to overcome the urge to roll off and lose momentum. At the other end of the section enduro legend Geoff Ballard was beaming at the enjoyment he derived from the challenge, saying how much he loved that sort of technical terrain. When a gifted rider the likes of Ballard has to actually half concentrate, you get an idea of just how much it tested any normal rider.

It was through this sort of terrain where the extra kilogram of crank weight the Adventure sports over its regular GS sibling really became apparent. The smoother low speed running, resistance to stalling and better traction it provided were a huge asset and underlined that despite its larger size and mass, the Adventure really is the pick of the two machines for serious off-road work.

The latest GS took a huge leap forward in on road sporting performance with a much more aggressive engine, chassis, brakes and tyre package. I mentioned after riding the new R 1200 GS that the performance gains were all made on road, while I didn’t feel that as a package off-road the GS had taken any great leaps forward to anything like the same extent.  Clearly that was BMW’s intention, as the Adventure now stands more apart than ever from the GS as the weapon of choice for more serious off-roading. The previous Adventure model scored a lower first gear than the GS, the new model does not have that ratio change, it doesn’t need it, but it does benefit from a myriad of other tweaks that help ready the machine for serious off-road adventuring.

The aforementioned heavier crank is joined by an additional vibration damper, different Telelever geometry and 20 mm more suspension travel at both ends to highlight the dynamic changes that help extend its off-road ability over the regular GS.  The rest of the differences; spoked rims, 10-litre larger tank, bigger screen, more crash protection, auxiliary LED riding lights, wider foot pegs and two-position brake lever are just the icing on the cake that helps boost the Adventure’s claim of being the best all-roads touring motorcycle in existence. No modifications needed really, it’s ready for anything straight out of the box.

Our test machine was fitted with the new Metzeler Karoo 3 rubber which proved vastly superior to the previous Karoo 2 on the road. BMW Motorrad Australia chose to fit the Karoo 3 over the Continental TKC80 rubber that comes standard with the machine. The improved Metzeler rubber holds up better on the road when subjected to journalistic abuse.  They held together for the duration of the 1100 km loop of Tasmania in a way that the previous tyre would not have had a hope of making at the pace we cut. We did have to nurse the rear a little on the late Sunday night run from Wakefield Park to Melbourne after meting out a little too much torture along the Eildon-Jamieson and Mansfield-Whitfield Roads on our way up, and the rear was basically a slick after our 3000 km, but no other tyre that I know of could have offered the off-road performance of the Karoo 3 and still manage to hang in there for the interstate tarmac work.

Without the benefit of riding such roads on more road oriented rubber it is hard to pin down how much the Adventure gives away to the regular R 1200 GS when pretending you’re on a sportsbike. The latest GS is a dead-set weapon in tight terrain, with its different geometry and slightly longer wheelbase we think the Adventure gives away a little of that stellar sporting tarmac potential in favour of more off-road capability.

That’s not to say the Adventure does not acquit itself well on the tarmac, dial the optional semi-active ESA up to Dynamic, on the fly, and the generous 210 mm (F) and 220 mm (R) of suspension travel is controlled beautifully, with the electronics reacting to every rider input and ripple in the road to effectively keep the Adventure taut and agile. The brakes are powerful, fade free and backed up by excellent ABS. A small amount of rear brake is applied automatically with the front to help keep the suspension effectively loaded in emergency stop conditions, it is so imperceptible in operation that you would never know it was happening. 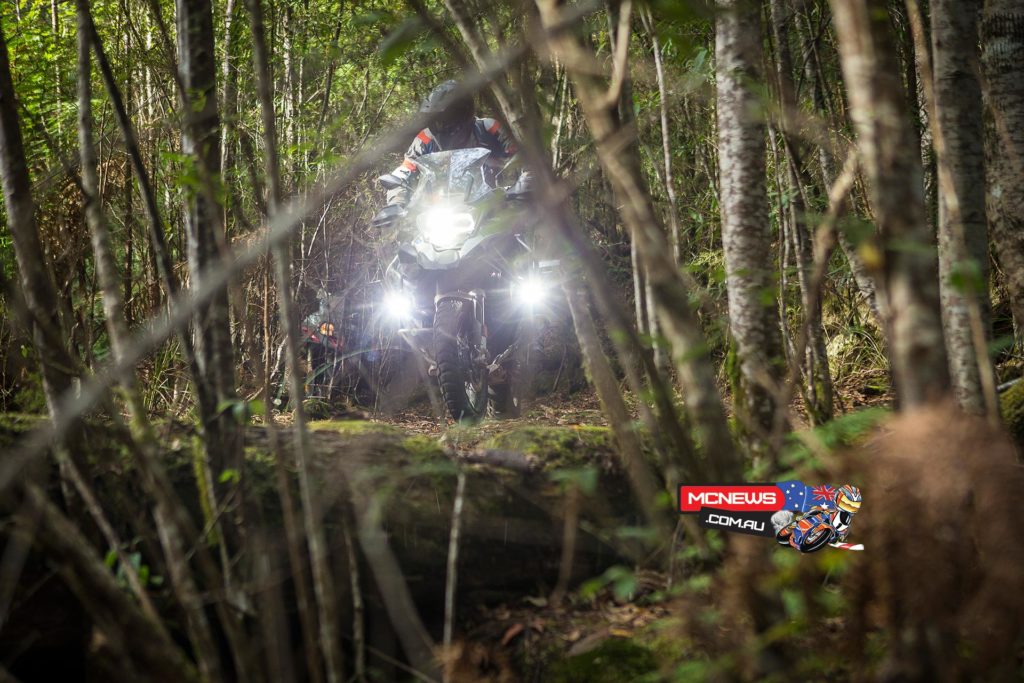 Off road the Enduro and Enduro Pro modes work brilliantly. Changing through the ESA modes also changes the engine maps accordingly, thus in enduro mode the prodigious grunt of the big boxer is more easily managed.  The traction control and ABS systems all tailor themselves to the riding mode in question.

I simply can’t overstate how far ABS has come even just in the past couple of years when it comes to off-road riding. Not long ago riding anywhere remotely aggressively on the dirt with ABS on was an uncomfortable prospect for experienced riders, the systems were too slow to cycle effectively and their threshold levels set too low as a result. It was still a great asset to inexperienced riders, but generally unliked by old hands. The latest generation system is absolutely brilliant for everyone.

In some of the more challenging terrain BMW’s Miles Davis noted that I was locking the rear a little too much during descents and suggested using Enduro mode instead of Enduro Pro.  The Enduro Pro mode allows the rear to be locked while still providing ABS on the front, the Enduro mode keeps the off-road tuned ABS active on both wheels, the result was a smoother and more controlled descent. It does take some experience with these machines before you really put your trust in these systems but once you do they reward you handsomely.

I can’t recommend highly enough that anybody purchasing a machine such as these enroll in one of BMW’s off-road courses where experts will really show you how to use all the riding modes to their best advantage. There are enough options available to confuse you, but every option available has an intended use that is of genuine assistance to the rider. And all the adjustments can be carried out on the fly as the terrain and your mood dictates.

I did take advantage of the optional low front seat, a no cost option at time of order, or a $481 accessory down the track, that lowers the perch to 840mm in the lower setting, or 860mm in its higher setting. The standard seat is adjustable through 890-910mm and is manageable at my 178cm height, but the low seat does add a little more security and confidence.

Our test machine also had the optional Touring Package ($1800) which includes Dynamic ESA, On Board Computer Pro, GPS mounts and cruise control. Our bike also boasted the Dynamic Package ($1400) which adds LED headlights, three extra riding modes over the standard ‘Rain’ and ‘Road’ modes (Dynamic, Enduro and Enduro Pro) and daytime riding lights. The optional aluminium engine guard and mounts ($468), headlight guard ($195) and tank bag ($498) bring the ‘as tested’ price up to $28,661 plus on road costs.

That’s not cheap in anyone’s book but when you have a machine that one day can be sliding around the beach at Strahan, rounding up road bikes in the mountains the next, then face a late night kangaroo infested 700km interstate commute after working all day, I can’t think of a better machine to be on and it actually adds up to a reasonable value proposition.

Despite all the fun of our on and off-road lap of Tasmania which helped to clearly underline the performance potential of the machine, what really brought home the all round brilliance of the package was that dangerous late night commute from NSW to VIC. Heated grips on, auxiliary LED riding lights helping me spot the roos in enough time to test out the ABS in two full emergency stops, the windshield up for maximum protection, ‘Road’ mode selected to help keep the engine smooth and suspension supple, and a near 600km tank range when riding at the speed limit with the cruise control on for the boring bits makes for a package that is as good as it gets. Just to underline that versatility, the entire 3000km was done on one set of tyres with the pressures never adjusted once. As a general rule, nobody would  choose to undertake interstate hauls late at night while dodging our native fauna, but, when you have to, there is nothing better for the job this side of a full size luxury touring bike. Try climbing Mount Terrible or pulling wheelies down the beach on a full dress bagger though…