Boris on Aragon MotoGP | Another brick in the Marquez wall

Another brick in the Marquez wall

He certainly is a sight to behold, this Marquez. On a track he likes, but on a bike that’s not the equivalent of the current Ducatis, and against a bloke who has pasted him in shoot-outs on one of those Ducatis before, the reigning (and quite likely the next) world champion still managed to secure a brilliant win. 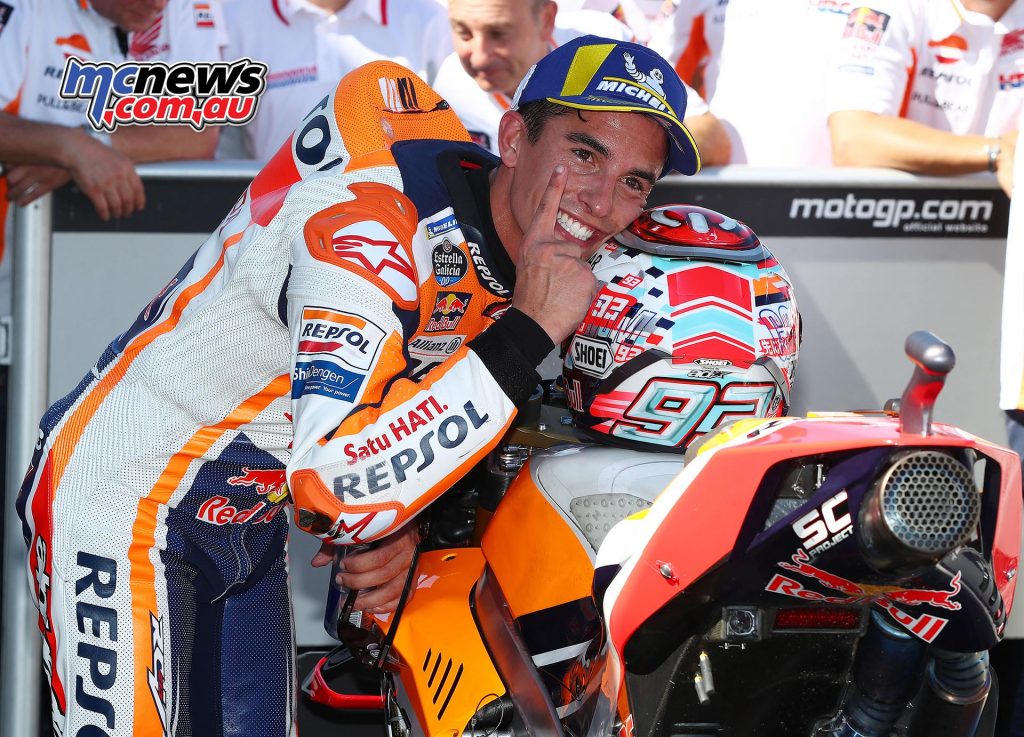 But before that happened, a few other things happened.

So in the lead-up to the race, I learned that Aprilia is in a dark place. Redding hates the bike. His team-mate, Asparagus A, also hates the bike – so much so he has demanded Aprilia let him ride last year’s bike for the rest of this season. 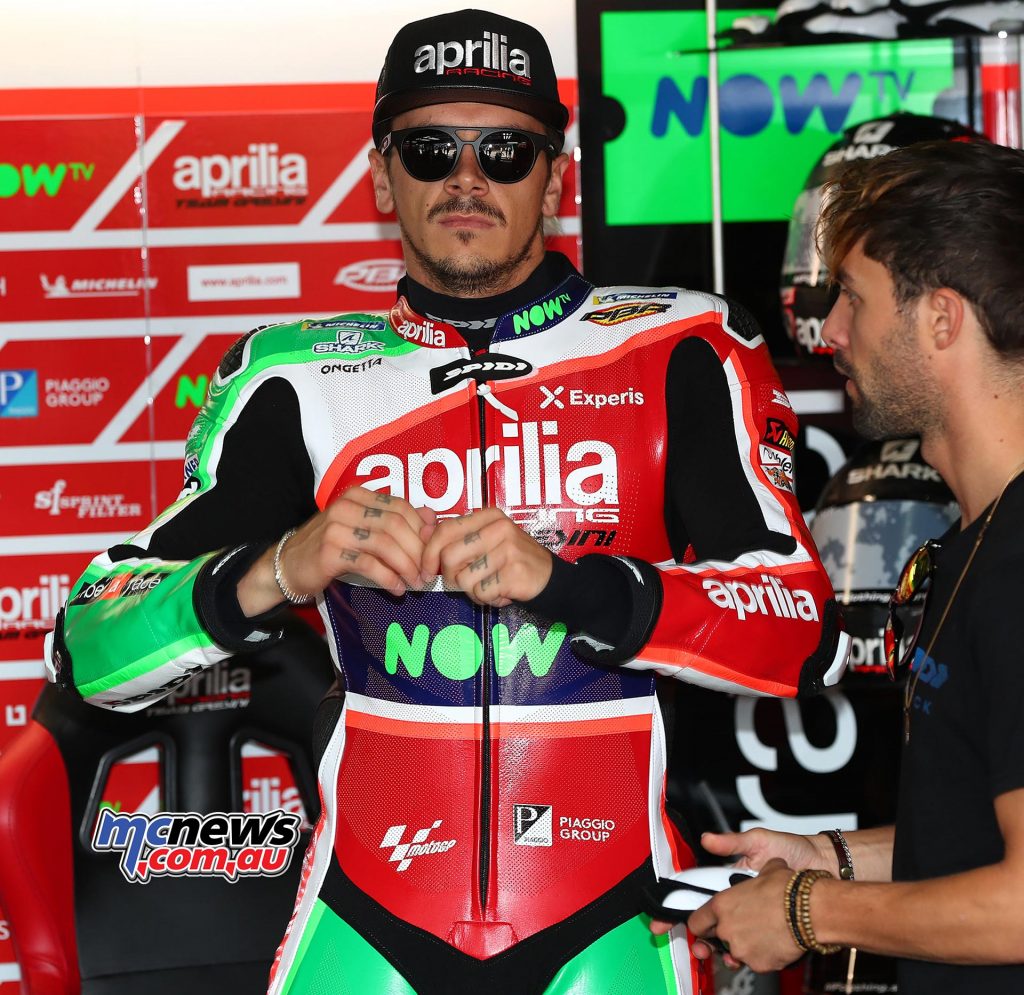 Aprilia understandably said no. But I can’t help but wonder how they’re going to go next year when Iannone, who is not as diplomatic or biddable as either of the aforementioned, walks into Head Office and starts cutting people because he hates the bike too.

There’s not much light in the room KTM is in either. The other Asparagus brother, Pol, crashed during Practice and broke the same collarbone he’d broken not that long ago. This leaves Bradley Smith and Mikka Kallio to carry the Austrian flag – in this instance to 19th and 22nd. 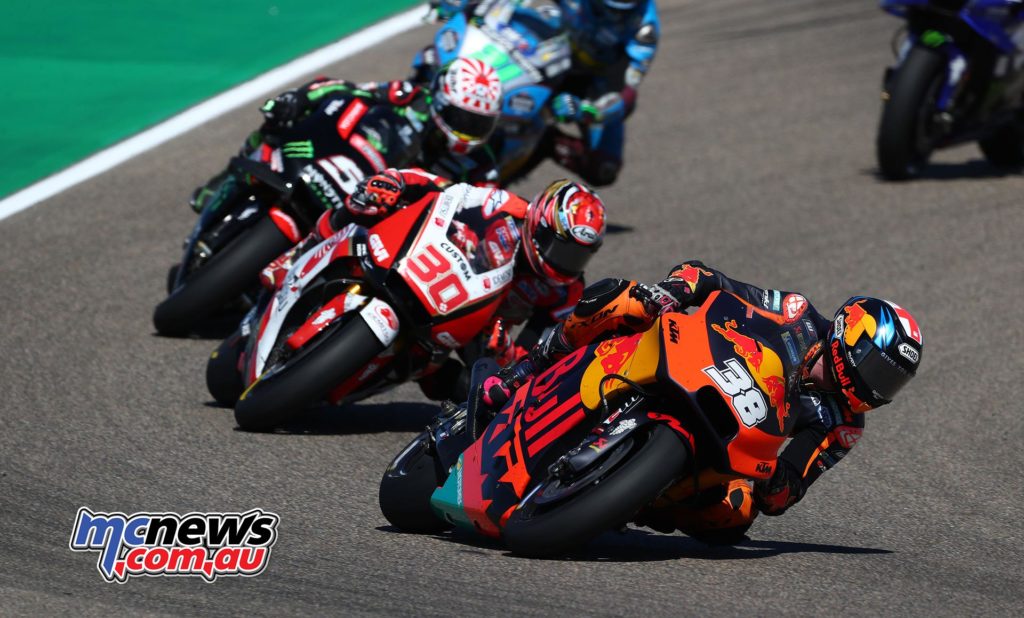 But the sun is shining on Ducati at the moment. Everyone agrees it’s the best bike in the paddock and this is probably why Lorenzo found himself on pole with his team-mate, Dovi, propped beside him, relegating Marquez to third. Cal was up there in fourth, while beside him sat a determined Iannone and a resurgent Pedrosa. 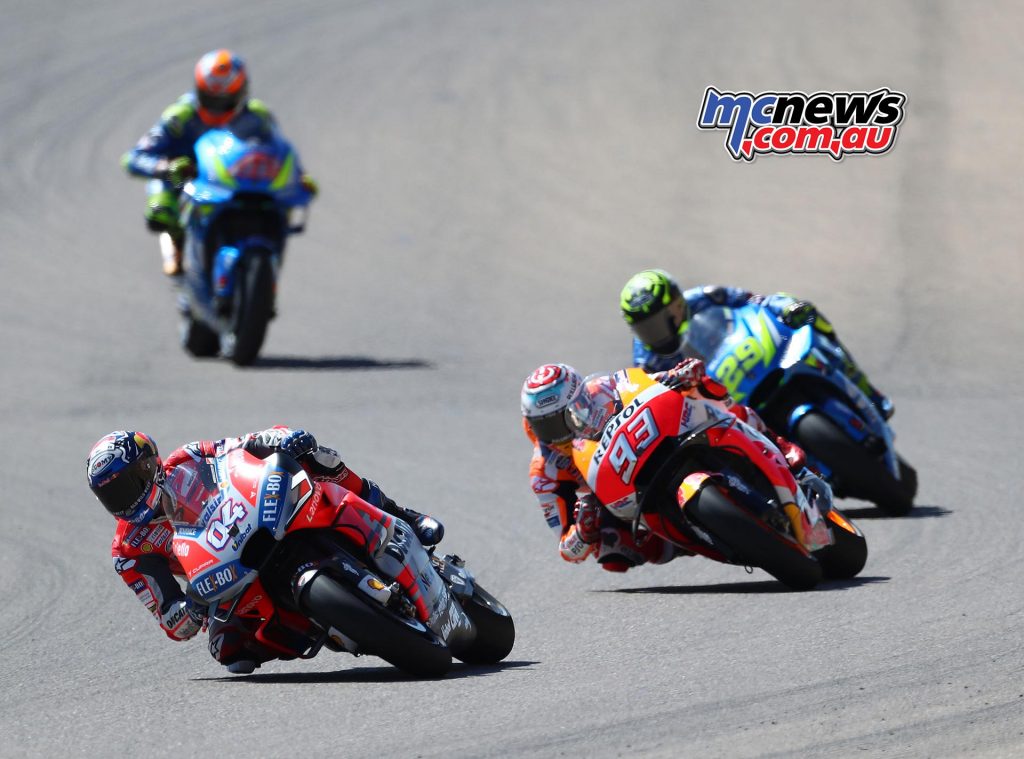 Rossi and Vinales, Yamaha’s power couple, were somewhere waaaay back on the grid. They also hate their bikes, but because Rossi is Rossi, Yamaha has publicly apologised to them (but mainly to Rossi) for building uncompetitive rubbish. It is unlikely Aprilia or KTM will apologise to their riders.

Rossi’s qualifying was an unmitigated disaster. The Doctor was in 17th on the grid and his team-mate was 14th. Rossi has stated it will be a miracle if a Yamaha can win a race this season. It will also be a miracle if hara-kiri cutlery has been sent to Jarvis and the team.
But all eyes were on Lorenzo as the race started. Everyone knows what a bullet he is off the line. 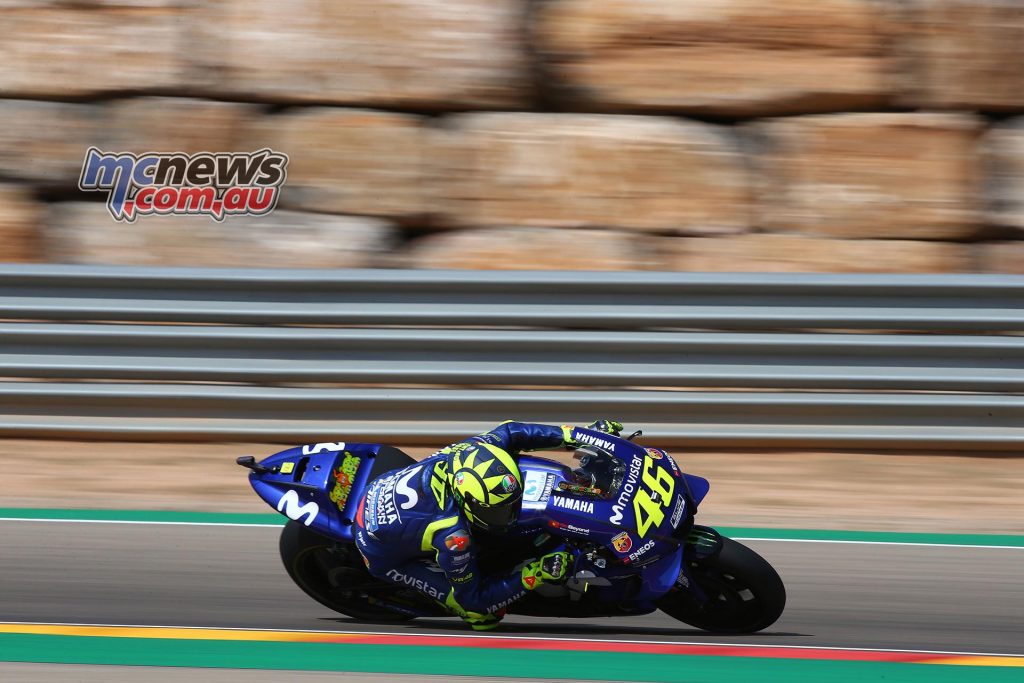 He has had a lot of success at Aragon and the stage was set for a repeat of this success. The Mamba even looked especially aggressive on the warm-up lap, soaring far out in front of the pack and grabbing big handfuls of brake as he came to the line.
Except then Turn One happened.

Lorenzo blames Marquez. And truth be told, Number 93 did run a bit wide in Turn One and forced Lorenzo a bit wide in turn. But he did not touch Lorenzo, who then admits to opening the throttle on a part of the track which doesn’t like that, and subsequently high-siding himself into the air. He landed head-first, then his bike gave him a nudge, and after examination at Clinica Mobil, his toe was declared dislocated, and his foot was bandaged.

Lorenzo being Lorenzo, has now threatened to take some time from his abnormally busy schedule to complain about his future team-mate at the next Safety Commission get-together in Thailand.

“Normally I don’t go because my schedule is very busy, always, more than normal. But I think in Thailand I will go. I don’t want to change my racing style, but I think in the future it will be a must, with some riders…” I’m pretty sure the Safety Commission will continue to let Lorenzo open his throttle whenever he wants to, and the track surface and cold tyres be damned, and do absolutely nothing to Marquez.

So after Lorenzo removed himself from the race, his team-mate went to work.

Dovizioso hammered his way to the front, followed by Marquez and Iannone, while Rossi managed to make up five places in the first lap to find himself in 12. The Doctor worked very hard for the rest of the race and ended up in eighth after finally catching and passing Jack Miller, whose year has been up and down, but mostly down. 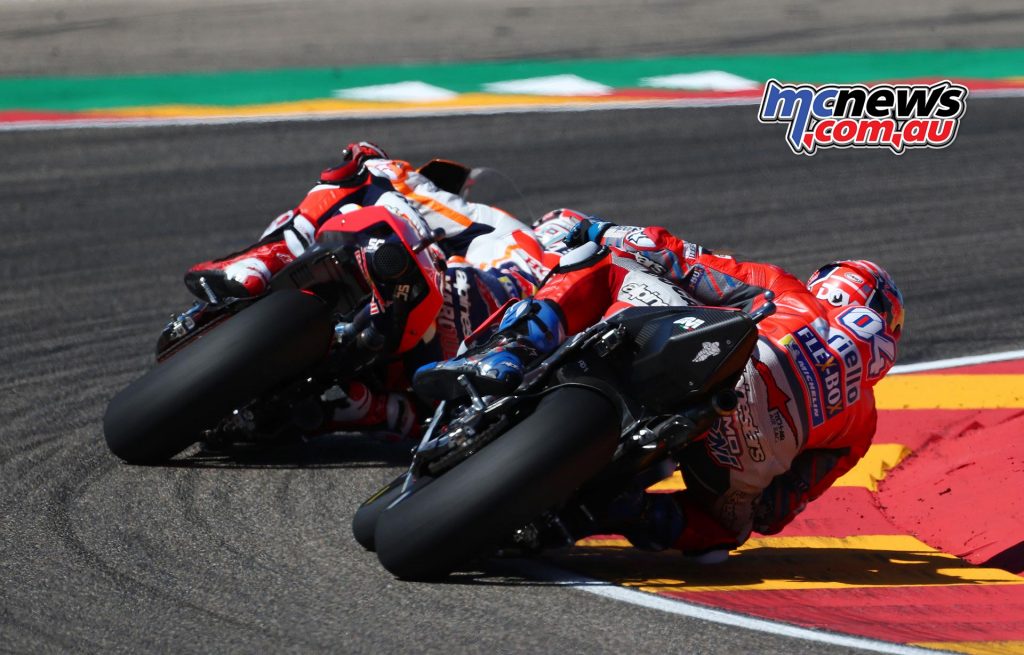 The pointy end was solid tension.

Iannone and Rins slammed their Suzukis into third and fourth and set off after Marquez, who was intent on not letting Dovizioso out of his sight.

Bautista exited the race in a shower of golden glitter off his disintegrating leathers, and with 20 laps left to go, Cal Crutchlow, who was in a solid seventh after Lorenzo fell off in front of him at the start, also crashed out. Presumably in sympathy. 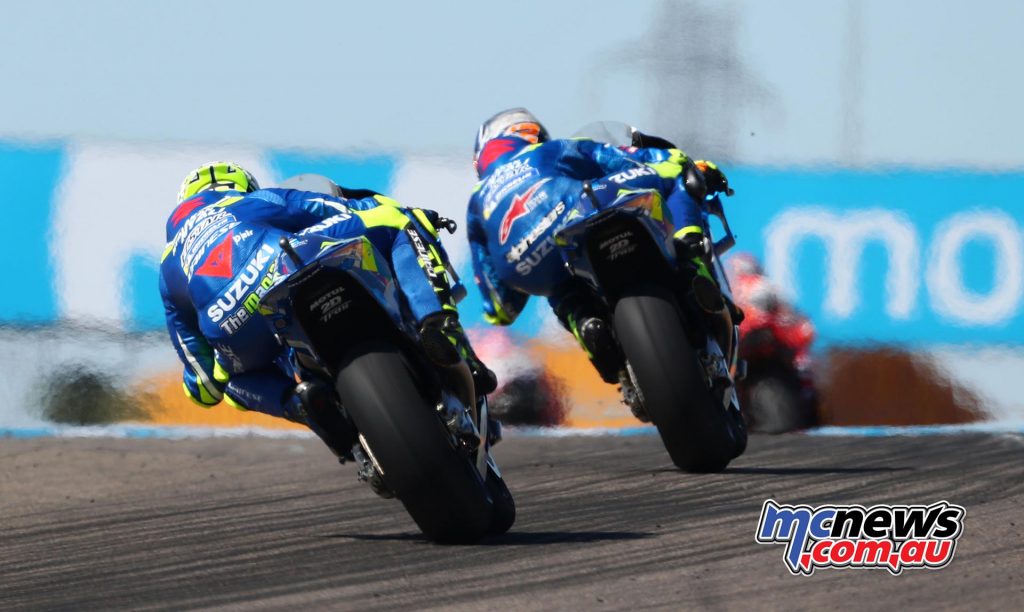 Dani also looked to be trying, as was Asparagus A, but as the race developed, it was clear the action was going to be between Dovizioso, Marquez and the two factory Suzukis, who were having their best race of the season.

Dovzioso’s Ducati was hosing Marquez down the back straight, but Marquez would always catch him a few corners later. Ten laps before the end, Marc made a pass stick and the intensity was dialled up another notch. 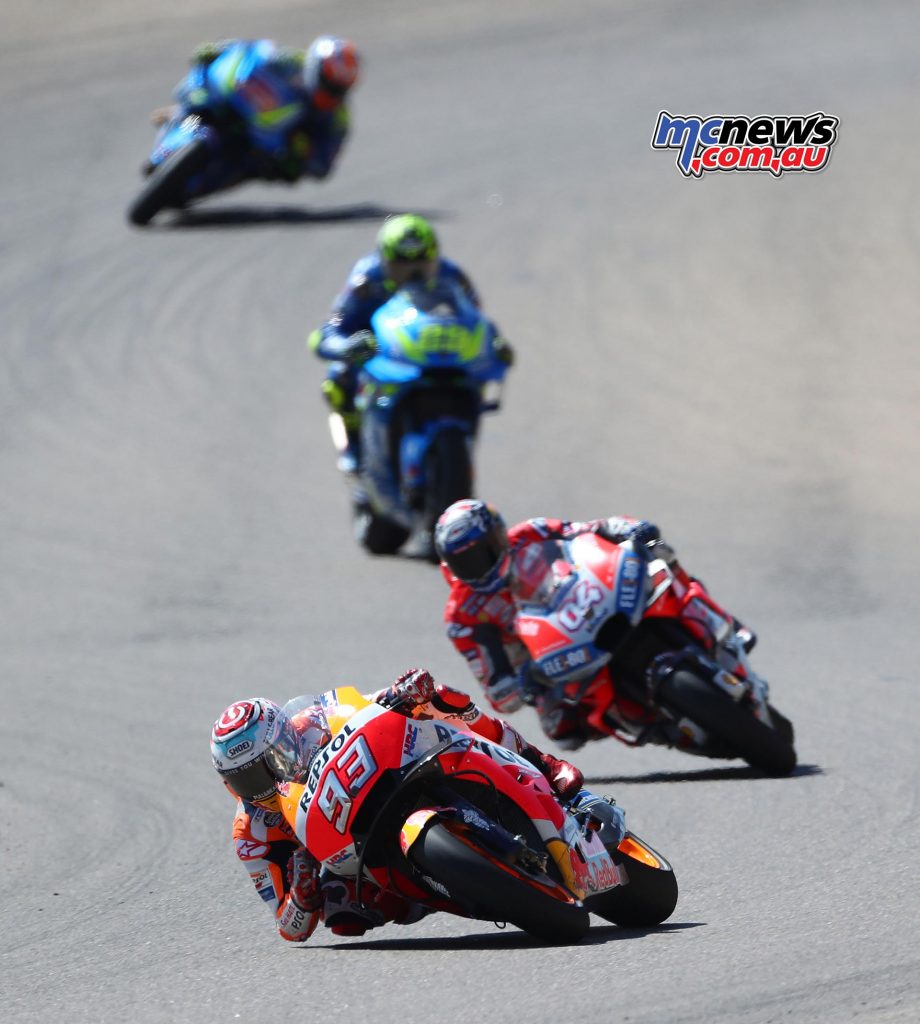 Iannone had squeezed past Rins, and looked set to catch the two riders ahead. They were engaged in a tit-for-tat exchange of pass and counter-pass, and this allowed the Maniac to creep up onto their rear-tyres.

At one stage, during the last five laps, Iannone actually led the race for maybe half-a-second, as Dovizioso and Marquez swooped and counter-swooped each other, and allowed him through. Dovi then regained the lead, only to have Marquez pass him in turn…and then the Spaniard just opened the taps. The pace rose and Iannone, clearly horrified and not willing to risk his podium, let them go. 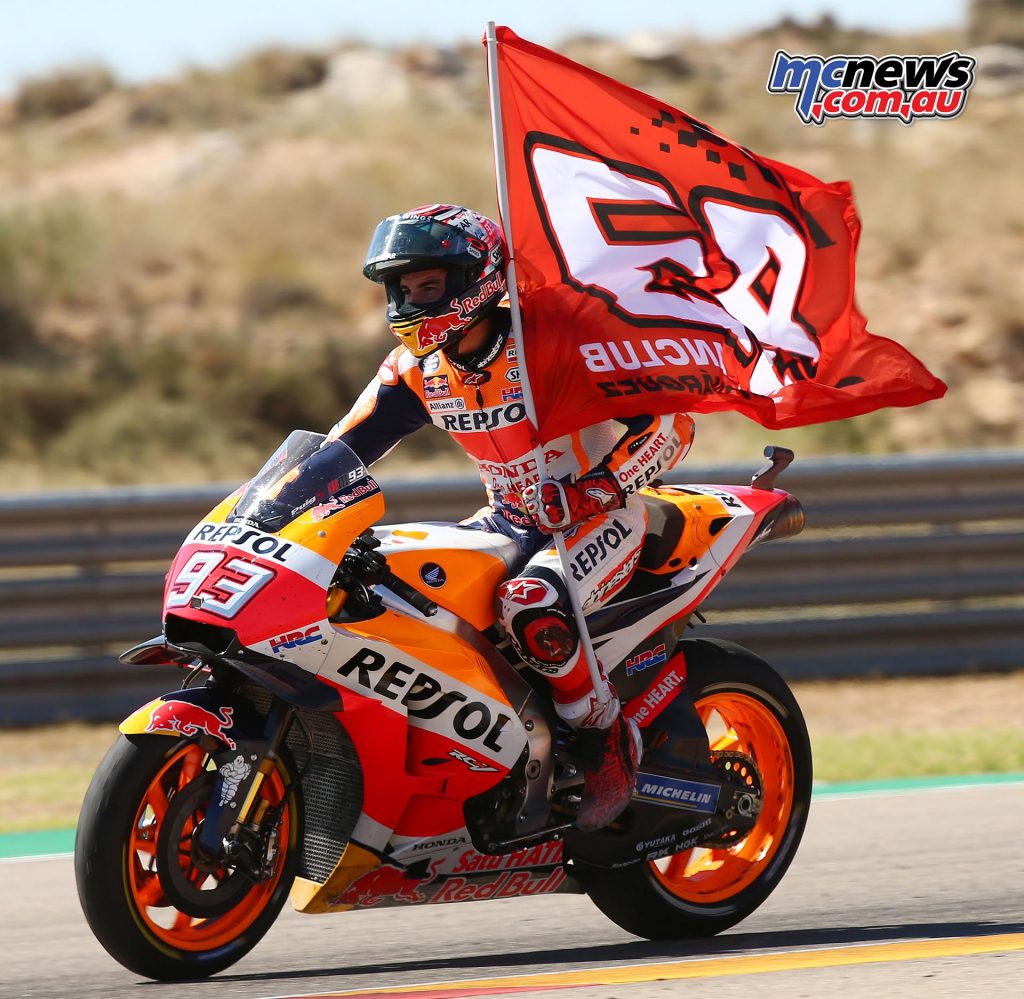 An ecstatic Marquez sailed home six-tenths of a second ahead of Dovizioso and the “best bike in the paddock”. Dovizioso is now also second in the championship, a big 72 points behind Marquez and a nervous 15 points ahead of Rossi. 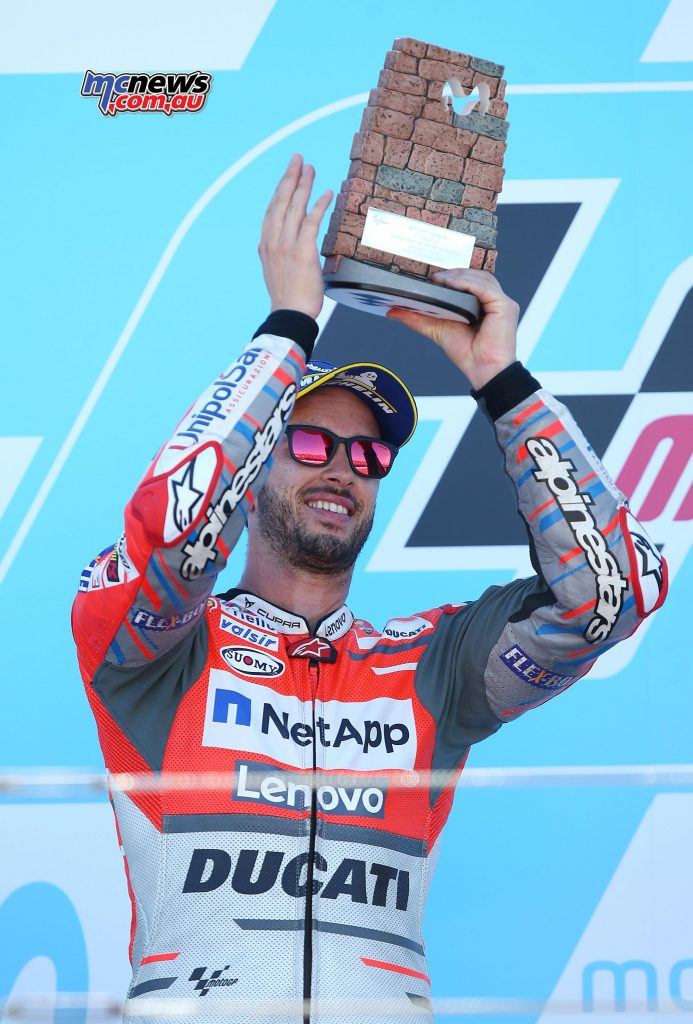 There are five rounds left – four fly-aways (including the brand new Thailand round), before they all return to Valencia for the curtain. 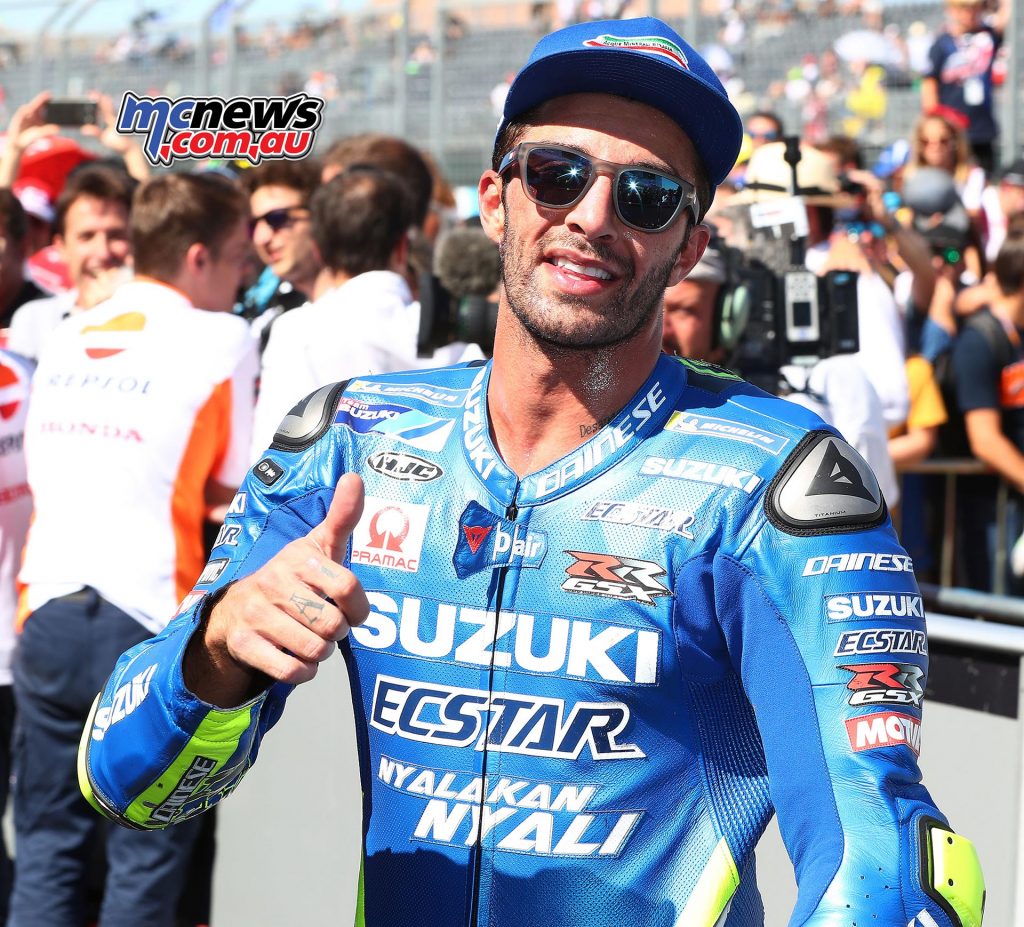 Mathematics say it’s possible Marquez could have the championship sewn up by Thailand.
But mathematics is not MotoGP. 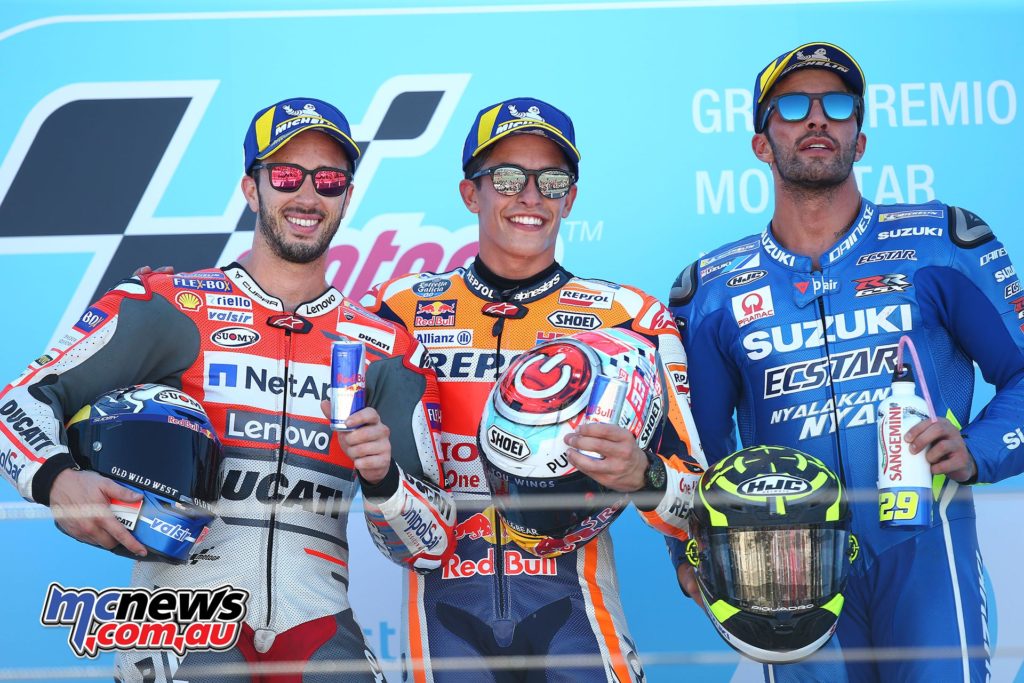 Take a ride with Boris for Father’s Day

What do we say to the god of death?