Fabio Quartararo will arrive in Melbourne later this month for the Pramac Generac Australian Motorcycle Grand Prix 2019 held over the October 26-27 weekend as one of the men to watch for this year’s main event at Phillip Island. Given his CV before he even made it to the world championship, that’s no surprise.

But progression in top-line sport, no matter how prodigious your talent, is rarely linear, and the fast Frenchman has taken a circuitous path before arriving at a place towards the top of MotoGP he always seemed destined for.

Rewind six years, and a 14-year-old Quartararo was doing things never before seen in the Spanish CEV championship, the national series that’s proven to be a springboard into Moto3 for so many of the sport’s current stars.

Quartararo and his family had their sights on the Spanish title for years – they moved from France when he was seven after he’d begun racing at age four – and with three wins from pole in the final three races of 2013, he took the title at the age of
just 14 years and 218 days.

The following season, 2014, was even more impressive; nine wins and two second places from the 11 races saw him repeat as champion, a run of success that broke all records, saw him mentioned in the same breath as Marc Marquez, and demanded a re-write of the rules.

Signed to compete in the Moto3 World Championship for 2015, Quartararo had to receive special dispensation just to compete in the first round in Qatar as he wasn’t yet 16-years-old, the minimum age for the series.

One race later, in Austin, Quartararo finished a stunning second, taking his first podium eight days before his 16th birthday. His march to the top was, surely, only a matter of time.

All of which begs the question, why has it taken this long for the 20-year-old to make
his way to, let alone his name in, MotoGP?

Injury, instability and circumstance conspired against Quartararo for several seasons before one standout result in 2018 set him on the path to put things right.

Quartararo’s 2015 debut season, which featured two podiums and two pole positions, came to a screeching halt after a nasty spill at Misano left him with a broken ankle, while a second year in Moto3 on a KTM produced only occasional flashes, and a 13th-place championship finish, which he repeated in 2017 after moving up to Moto2 on a Kalex.

A 10th-place Moto2 championship finish in 2018 on Speed Up machinery wasn’t the stuff of headlines, but on one magical weekend at Montmelo in Spain, Quartararo reminded the world of his prodigious, yet unfulfilled, talent.

A first pole position in 50 world championship starts came on the Saturday at Catalunya, which he converted the next day for his maiden victory. The relief – and the lifting of the weight off his shoulders – was obvious.

“In 2015, a lot of people were comparing me to Marc,” he reminisced after that breakthrough victory. “That was a lot of pressure, and especially at that age I didn’t really realise. I don’t think I could take it anymore.”

The result heralded the beginning of Fabio 2.0, the rebooted Frenchman finding new consistency as he finished inside the top 10 in all but one race for the remainder of the season.

It was then that new-found momentum combined with a smattering of luck to create an opening; the new Petronas Yamaha SRT MotoGP team for 2019 came calling in August after failed attempts to woo Jorge Lorenzo and Dani Pedrosa, signing Quartararo to partner 2018 MotoGP rookie Franco Morbidelli for its first season in the premier class. He wasn’t the team’s first choice, far from it, but the big opportunity on a bigger bike was all Quartararo needed.

Under the floodlights in Qatar – the same Losail International Circuit where he’d made his World Championship debut as a pimply-faced kid four years earlier – Quartararo stunned the MotoGP establishment in March this year when he qualified fifth for his top-flight debut.

Better looked set to come, and it came quickly; by round four in Spain he was on pole for the first time, and he took his first podium at Catalunya in June, qualifying on pole again and beaten only by Marquez just a week after arm pump surgery. By mid-season, he was comfortably the fastest – if not the most consistent – of the quartet of Yamaha riders on the grid, a succession of front-row starts on a 2018-spec bike leaving factory stablemates Maverick Vinales and Valentino Rossi in his wake.

And then came the first of what seems destined to be many head-to-head battles with Marquez at Misano, Quartararo taking the lead on lap three and staying there for 23 laps with Marquez breathing all over him before the world champion bullied his way by on the final lap.

Why has Quartararo been so fast so quickly on a MotoGP bike after a so-so career in the junior classes? It’s a combination of environment and machinery, he feels.

“To be fast in this category you don’t only need a good bike, you need a good bike and good people around you: good mechanics, a good crew chief, everyone must be a family,” he told Motorsport Magazine in July.

Far from being crestfallen with seeing a maiden victory slip through his fingers at Misano, Quartararo was thrilled to be mixing it with the modern-day master’s of MotoGP, and a rider mentioned in the same sentence as him for so long. A bold re-pass of Marquez on the final lap before the Honda rider reasserted his authority gave him belief for the future, and, for seasoned paddock observers, was something of a line in the sand.

“I’m really happy about what we did … (it’s) the best moment not only of my career,
but of my life,” Quartararo said. “When you have a seven-time world champion behind you for 20 laps and he  overtake you at the first corner, you overtake him back on corner four, I was so happy to have a fight with him. The good thing was I could overtake him back, and this gives me a lot of confidence, to say ‘he’s a seven-time world champion, but we can overtake him’. He’s a human like us.”

The stats would seem to suggest otherwise with Marquez, but of all the riders on the grid, perhaps it’s Quartararo who can give the Spaniard the sternest test as he attempts to re-write the sport’s records. Especially as despite Phillip Island being a fast track it is not a circuit where outright horsepower decides the victor, and the Frenchman’s smooth flowing style could be key around the back of the circuit.

Whoever emerges victorious in their head-to head battles in the years to come, the winners will be MotoGP fans the world over if Quartararo’s star continues to ascend as it has so rapidly in 2019. 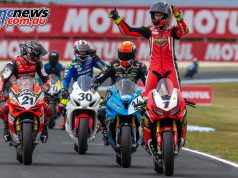