Ducati 750 Paso | The commencement of a new era at Ducati

I briefly mentioned a few columns ago – Bimota’s ‘base’ DB1 – that Massimo Tamburini was hurriedly employed by Cagiva after they knocked back Bimota’s design that went onto become the DB1.

Tamburini thus had the challenge of coming up with not only Cagiva’s first major new Ducati after their takeover of the company, but also to do it in the minimum amount of time possible! The result was the Ducati 750 Paso, named after the late Renzo Pasolini who was killed, together with Jarno Saarinen, in the 250cc GP at Monza in 1973.

The design brief was for a sophisticated bike that continued Ducati’s sporting heritage whilst also being more comfortable and practical than the Pantah. Also it should be cheaper to manufacture. He came up with a fully enclosed design that debuted in 1985, preceding Honda’s CBR600 Hurricane by two years. The DB1 pipped it by a few months in becoming the first fully enclosed production bike since Vincent’s Black Knight of 1954.

The power plant was the 750F-1 unit but modified with the rear cylinder head reversed so a Weber 44DCNF twin choke down-draught carburettor could be used. While fitting the Weber simplified the intakes and cable runs and provided greater torque it turned out to be the major source of the Paso’s problems.

The location of the carb between both cylinders and shrouded by the body panels meant it could be prone to overheating in traffic, vaporising the fuel causing erratic running or even complete engine stoppage.

As the the chassis was hidden by the body work Tamburini used square section tubing that was cheaper to manufacture and weld. The chassis employed radically different geometry to earlier Ducati V-twins. 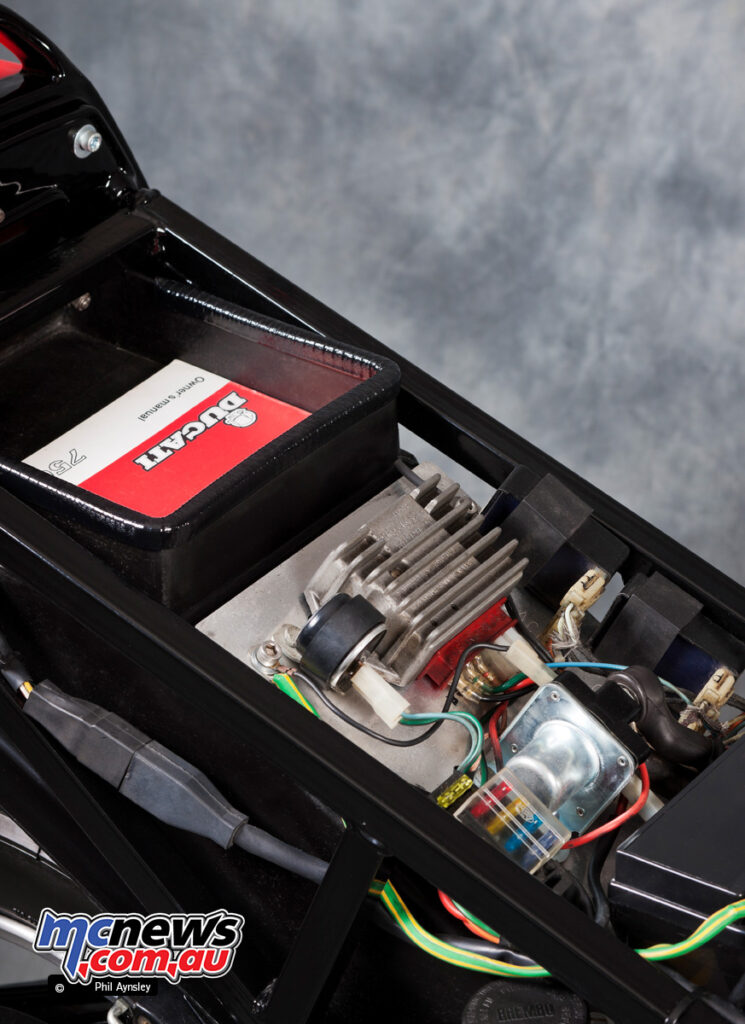 The new 16 inch radial tyres had a much reduced diameter than the 18 inch tyres used previously and Tamburini took advantage of that to reduce the steering rake down from 31 to 25º and bringing the wheel over 50 mm closer to the centre of the bike, at the same time increasing the swingarm length by 62 mm.

The result was an excellent handling bike that was considerably more nimble than its predecessors. When launched the only colour was red but blue (and white for a Limited Edition US model) were later available. A 350 version was displayed in 1985 but never proceeded with.

Ducati 916 in feature | The bike that defined an era