The third round of Monster Energy Supercross, an FIM World Championship, saw 42,984 fans fill Angel Stadium on Saturday for the final Southern California stop of the 2017 season.

After back-to-back runner-up finishes in the first two rounds, Team Red Bull KTM Factory Racing’s Ryan Dungey led the entirety of the 450SX Class Main Event for his first win of the season on a night that saw Ken Roczen suffer a frightening crash.

As the 450SX Class field roared into the first corner of its timed Main Event it was Monster Energy/Yamalube/Chaparral/Yamaha Financial Services/Yamaha Factory Racing rookie Cooper Webb who secured his first SupercrossLive.com Holeshot Award, but Dungey would soon put his KTM out front through the first rhythm section. 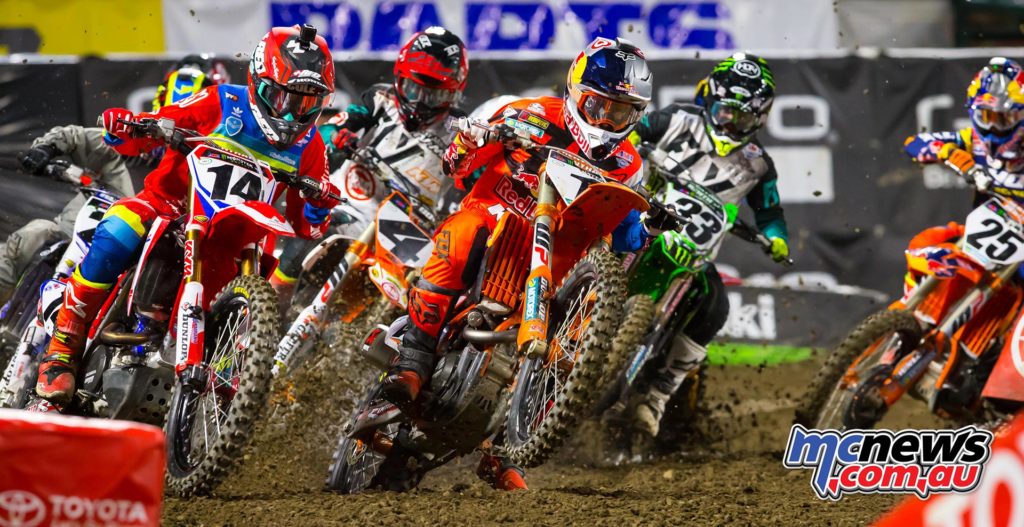 Webb settled into second behind the reigning champion, with Team Honda HRC’s Cole Seely right behind in third. Championship leader Ken Roczen suffered his worst start of the season, coming through in ninth, but wasted little time in moving his Team Honda HRC machine through the field.

Dungey set a torrid pace out front to open a gap on the field while Webb fell into the clutches of Seely, who moved into second on Lap 2. As this unfolded Roczen made several passes of his own and broke into the top five, settled in behind Team Red Bull KTM Factory Racing’s Marvin Musquin in fourth. He would pass Musquin for fourth on Lap 3, and then moved into podium position by passing Webb on Lap 4.

The lead trio continued to run at a blistering pace, with Dungey maintaining a comfortable margin out front. After a relentless pursuit of his teammate for second, Roczen’s race came to an end on Lap 9 when he was forced to let go of his bike while in mid air on one of the track’s largest jump sequences. He landed violently on the track and was immediately attended to by trackside medical personnel. He was eventually helped up and placed in a medical transport vehicle that took him back to the pits before transporting him to a local hospital for further evaluation where a compound arm fracture was diagnosed.

As the race continued, Dungey further cemented his hold on the lead as the battle for second intensified between Seely and Musquin, who moved into third following Roczen’s crash. The Frenchman made the pass on Seely on Lap 11 and never looked back.

Dungey went on to take his 32nd career win, and his fifth victory in Anaheim, by 2.7 seconds over his teammate, giving KTM a 1-2 finish. Seely followed in third with his first podium result of the season.

“I didn’t have the greatest gate pick, but I got out of the gate good. I got out front and I could see the board, and I knew Ken was coming,” said Dungey. “I hope he’s ok. He’s been right on my heels and the pressure was on. You’re either going to fail or go after it and he just kept pushing. The track was nasty. It deteriorated quick and I just focused on hitting my lines and hitting my marks.” 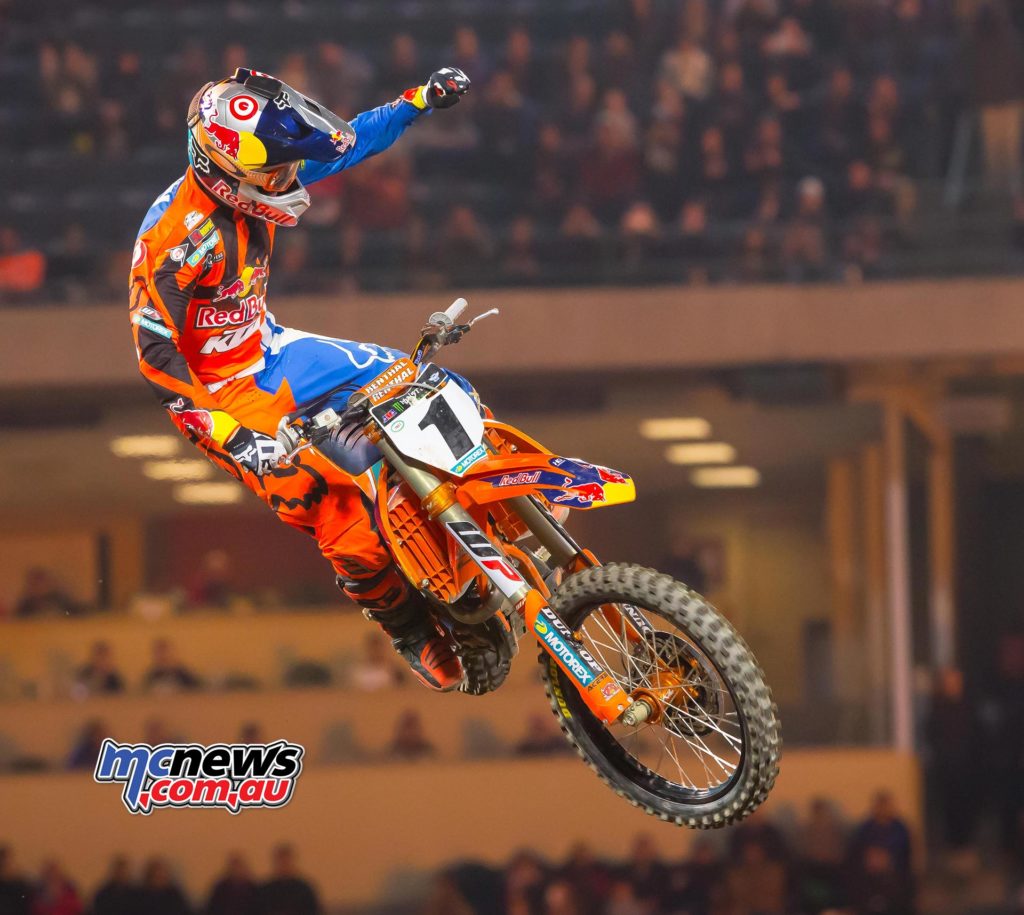 Dungey’s win, combined with Roczen’s DNF, resulted in a dramatic shift in the 450SX Class championship standings. The defending champion has taken over the top spot in the points and will carry the red number plate beginning next weekend. Dungey now holds a seven-point lead over Musquin, while Roczen dropped from first and into a tie for third with Seely, 18 points out of the lead. 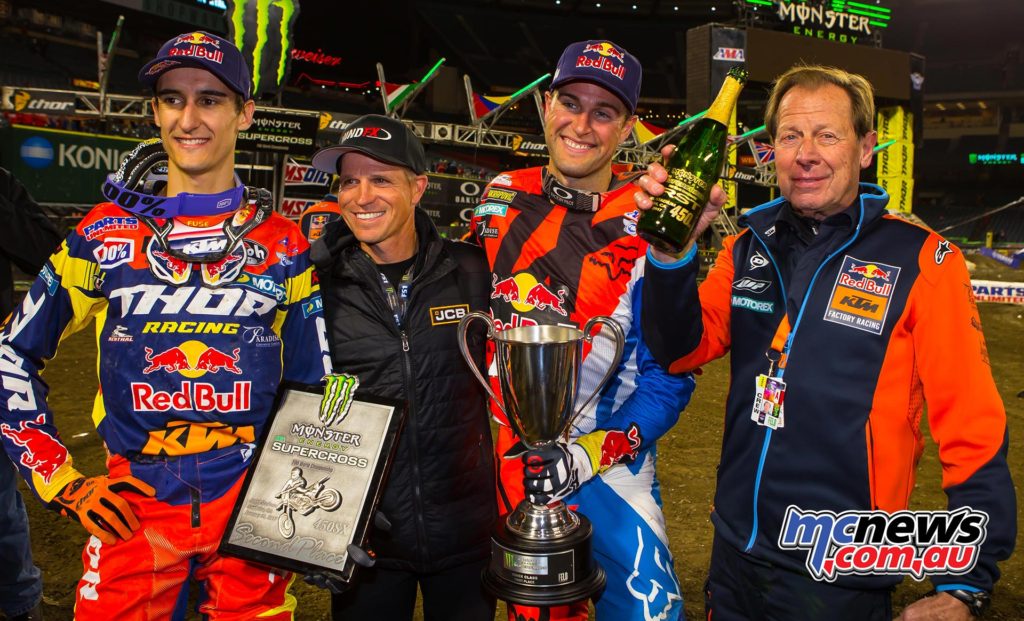 “All I can say is ‘you gotta do what you gotta do.’ Both of us went to the semi-final but still qualified to the Main Event and proved we can still be on the podium after going to the semi. Once again at the beginning I wasn’t as good as the end but I tried to stay calm and keep up with those guys. Roczen got around me and had a big crash so after that I tried to switch up my line to stay smooth. I wasn’t too far from Ryan but he was already gone at the beginning so 2nd place wasn’t too bad for me and a really good night for Red Bull KTM.” 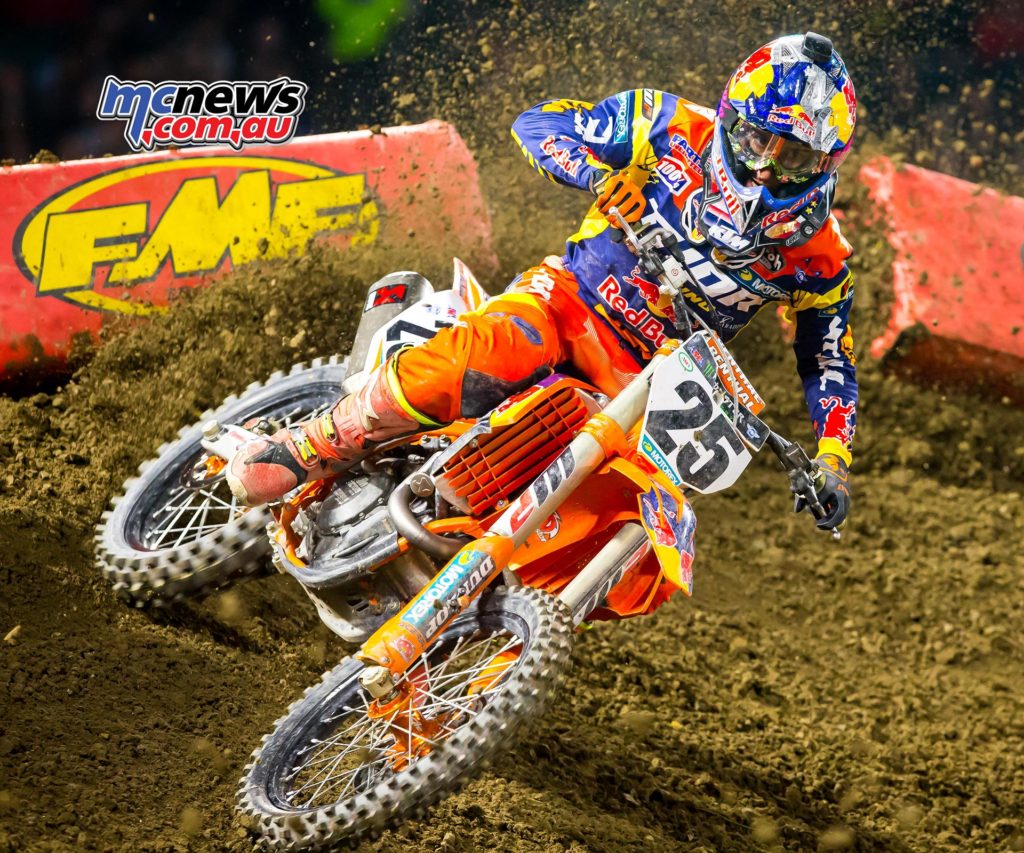 Prior to the Main Event Rockstar Energy Husqvarna Factory Racing’s Jason Anderson was disqualified from competition by race officials, resulting from an incident with Smartop/MotoConcepts Racing Honda’s Vince Friese following the pair’s Heat Race. Anderson had finished fourth in each of the previous two rounds and entered the night fourth in the championship standings. 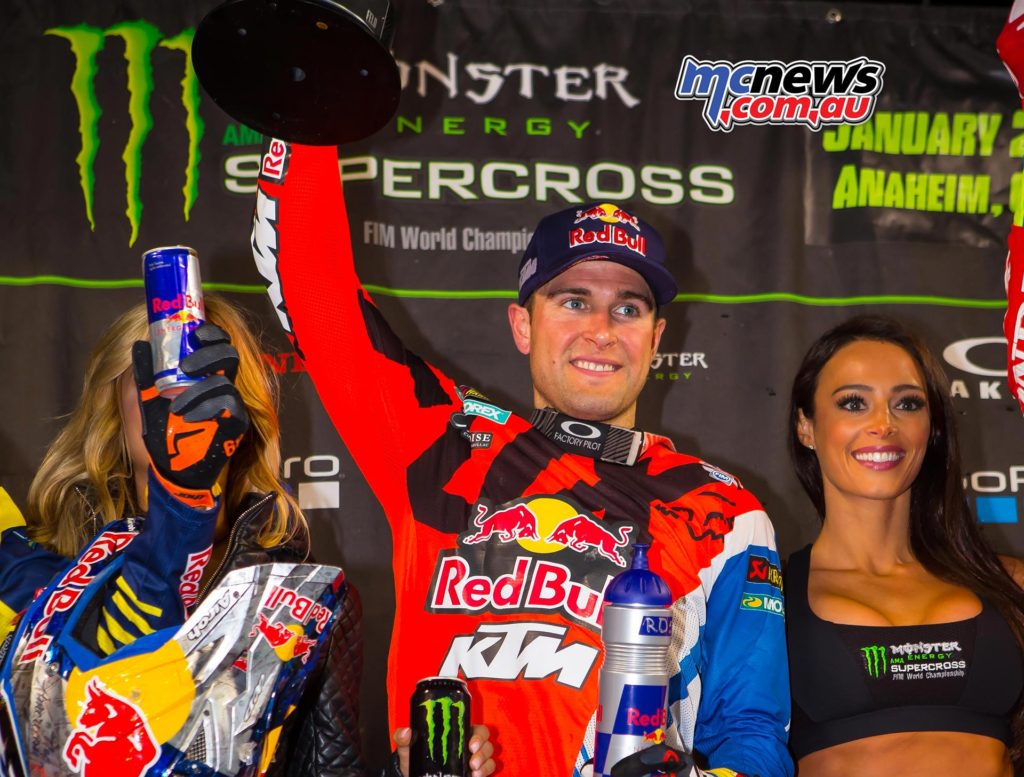 As the field jockeyed for position through the first rhythm section, Hill was able to put his Kawasaki into the lead, with Plessinger following in second and Forkner in third. Behind them, Troy Lee Designs/Red Bull/KTM’s Shane McElrath, the championship leader and winner of the first two races, slotted into fifth.

With a clear track ahead of him Hill was able to lay down some of quickest lap times in the early stages of the timed Main Event and established a comfortable lead, as Plessinger settled into second.

McElrath, who moved into fourth on the opening lap, closed in on Forkner for third on Lap 4 and made the pass to move into podium position. From there the lead group maintained their positions, each isolating themselves on the track as they encountered lapped riders.

Hill went on to lead the entirety of the Main Event for the fourth win of his career, crossing the line 5.3 seconds ahead of Plessinger in second. McElrath rounded out the podium in third.

The weekend ended great,” said Hill. “It’s funny because I started the day feeling off, but when the main comes around and there’s points on the line, it’s go time. I let it all hang out on the track and I was able to do it confidently. When I took over the lead I didn’t expect to get it at that time, it came faster than I thought and I just went with it. I’m excited about the rest of the season and about right now.” 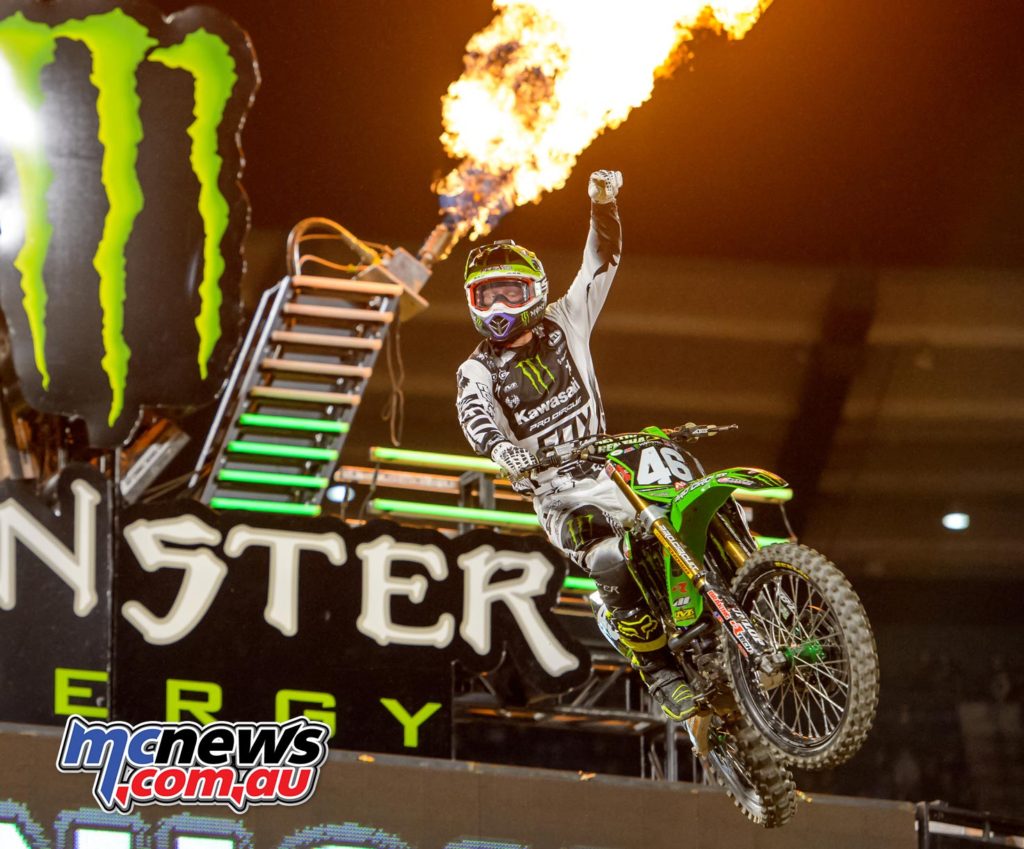 McElrath maintained his hold of the Eastern Regional points lead, with his three straight podium finishes to start the season giving him a six-point lead over Plessinger, who has also finished on the podium in all three races. Hill now sits just seven points out of the lead in third.

“Being in the championship race has been a whole new thing for me. It’s something that we can’t be anything other than thankful for ,” said McElrath. “We’ve still got the red plate and we’re still in the points lead. Tonight everyone was going fast. I gave it everything I had, but tonight that was third.” 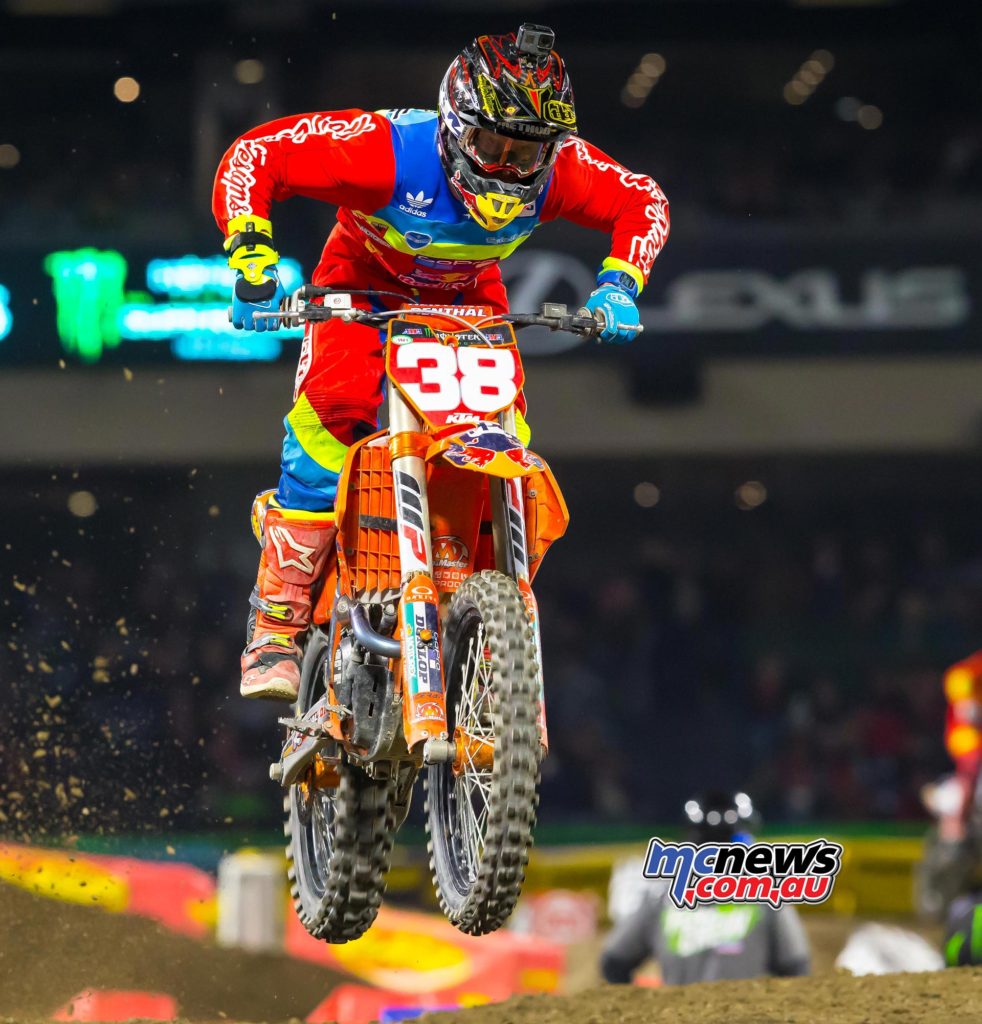 “I was charging pretty hard in the first lap,” said Forkner. “I was stood up a couple times and then made a mistake in the whoops and went back to fourth. Most of the race all happened in the first couple laps for me. If I was able to get the first few laps clean I would have had a better result. After I started riding smoother, I was able to match the pace of the riders in front of me and I feel really confident moving forward.” 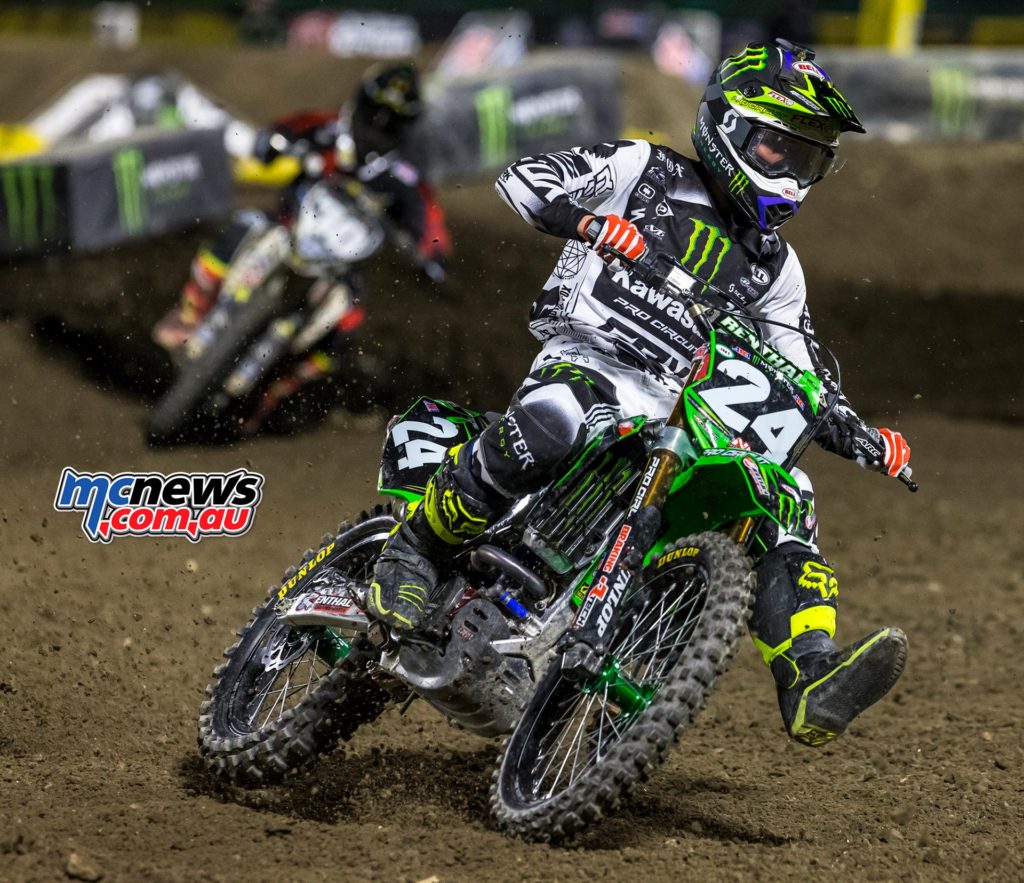 The 2017 Monster Energy Supercross season continues next Saturday, January 28, for the fourth round from University of Phoenix Stadium in Glendale, California. The action can be seen live on FS1 starting at 6:30 p.m. PT / 9:30 p.m. ET.

Bathurst 1986 through the lens of Phil Aynsley

Steve Martin on ASBK rookies stepping into the breech

A close look at the CDR Yamaha YZ450F