Home heroes Spain underlined their complete dominance of top-flight Trial by storming to an emphatic victory at the 2017 FIM Trial des Nations at Baiona, in the process extending their record-rewriting win-streak at the event to a phenomenal fourteen victories on the bounce.

“I’m very happy. The Trial des Nations is always special because we work together as a team. For the national team to win in Spain is very important and makes it even more special for the fans and the riders. The venue is fantastic for the public. The sections are very close to the town and it is a beautiful place to ride.”

Following their comfortable qualification win on Friday, Spain had the advantage of starting at the back of the seven-nation field although such was their mastery of the fifteen sections they could have started at the front without fear of being challenged.

With the best two results in each section counting towards the teams’ overall scores, Spain wasted little time in opening up a commanding lead – much to the vociferous home fans’ delight – and after the first seven sections led Great Britain by ten marks, an advantage they comfortably maintained at the halfway stage.

Their opening lap was not without drama, however, with Bou crashing heavily over the handlebars on section three, but solid cleans from Raga and Busto made sure the Spanish score was not affected.

After a disastrous maximum in qualification forced them to start at the front of the field, James Dabill – Gas Gas, Jack Price – Gas Gas and Iwan Roberts – Beta focused on keeping Great Britain ahead of third-placed Japan.

With light rain beginning to fall which made the sections slippery, Spain then moved up a gear and completed the second lap for the loss of just one mark to take their total to a sensational six.

A late five almost dropped Great Britain into the clutches of the Japanese trio of Takahisa Fujinami – Repsol Honda, Kenichi Kuroyama – Yamaha and Tomoyuki Ogawa – Honda, but cleans on the final two sections earned them second on forty-two, three marks ahead of Japan.

In the International class Australia came out on top of the thirteen competing nations after a close-fought contest that saw the Czech Republic team of Martin Matejicek – Gas Gas, Marek Wunsch – Gas Gas and Martin Kroustek – TRRS lead after an unpenalised opening lap.

As the Czech challenged crumbled on lap two, Daniel Blancgonnet – Honda, Bryan Roper – Gas Gas and Pat Smage – Sherco steered the US into the lead but two maximums on section thirteen sealed their fate and they finished second, four marks behind Australia and five ahead of the Czech Republic.

Ireland claimed fourth a further ten marks adrift, with Sweden one mark behind in fifth.

“Congratulations to the Men’s International team on placing first! All three men rode exceptionally well, each stepping up to the plate to get the job done. Couldn’t ask for a better result.” 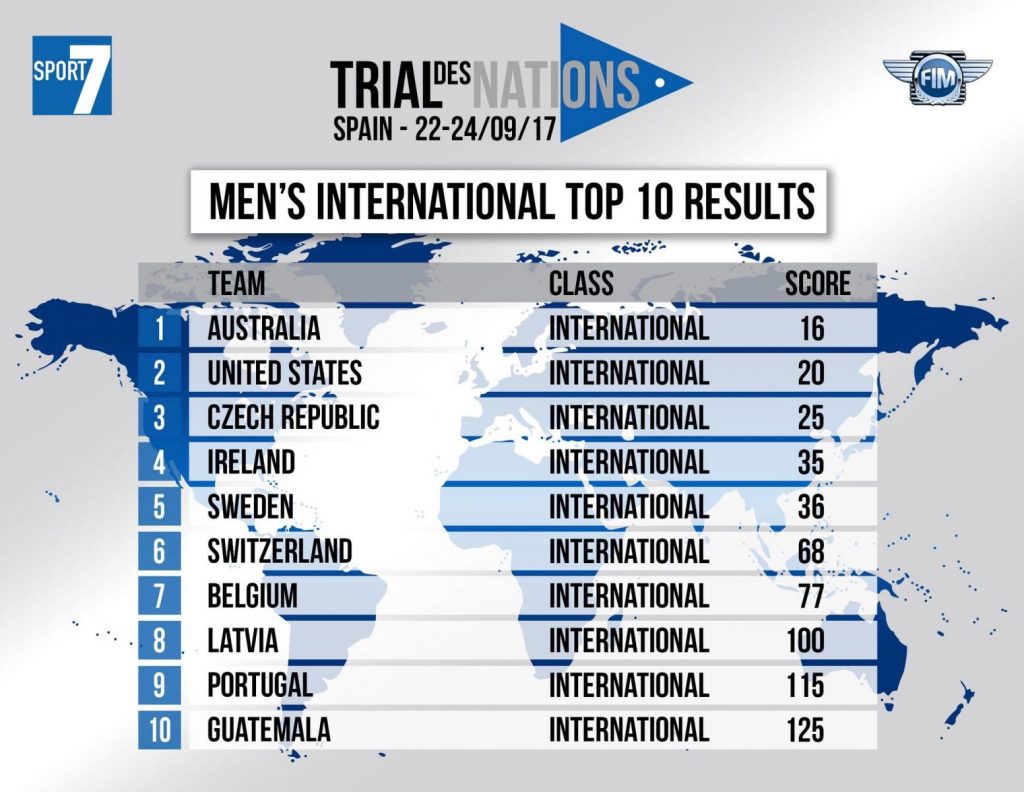 The Australian Women’s Team performed admirably. They were faced with several challenges but they handled them extremely well. The sections were tough but they never let that worry them. Victory for the Womens class went to Spain. The Women’s Team will look to use the 2017 TdN as a building block to further a successful outing for Australia. 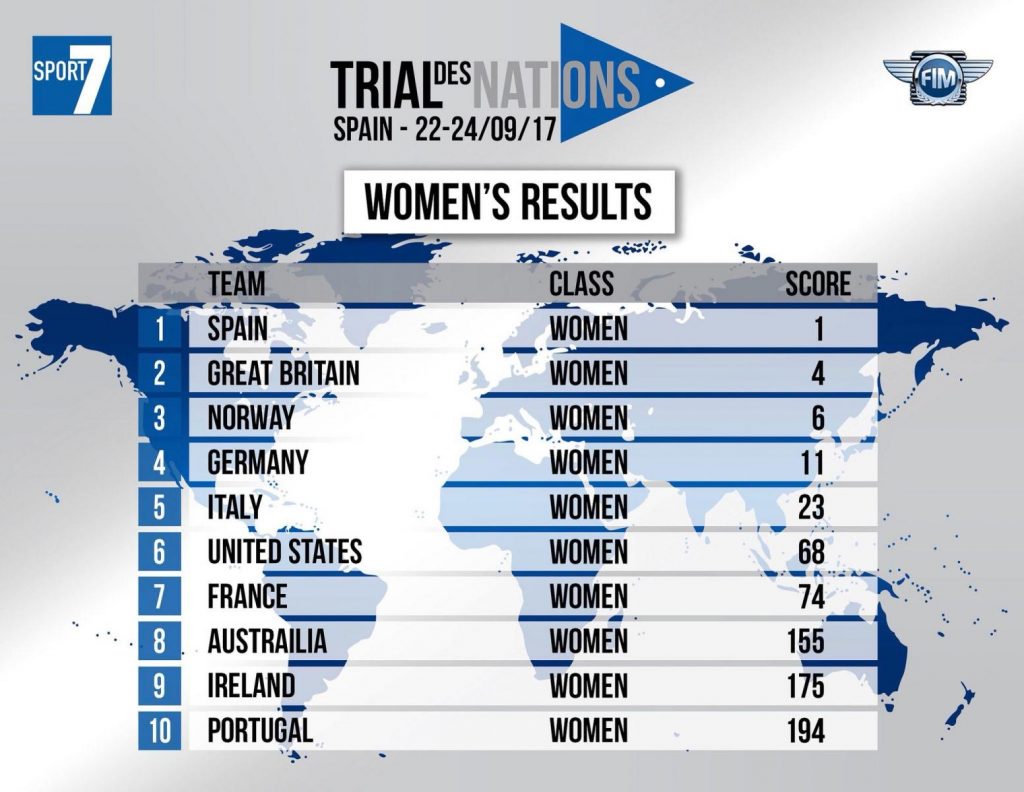 Phil Whittle congratulated the Women after a daring performance

“All three girls had exceptional rides throughout the day, when the team needed a good score one of the girls stepped it up to cover each other. Two full on laps, they handled it so well physically and mentally, we’re proud of our girls that’s for sure.”

“I’m extremely proud of our riders after many years of Team Australia putting in amazing efforts to take out the International Men’s Class of the TdN! It’s great to see the team achieve excellent results on the international stage. These riders have put in their own time and effort to achieve success. The Men’s and Womens Teams deserves all the plaudits after a successful TdN!” 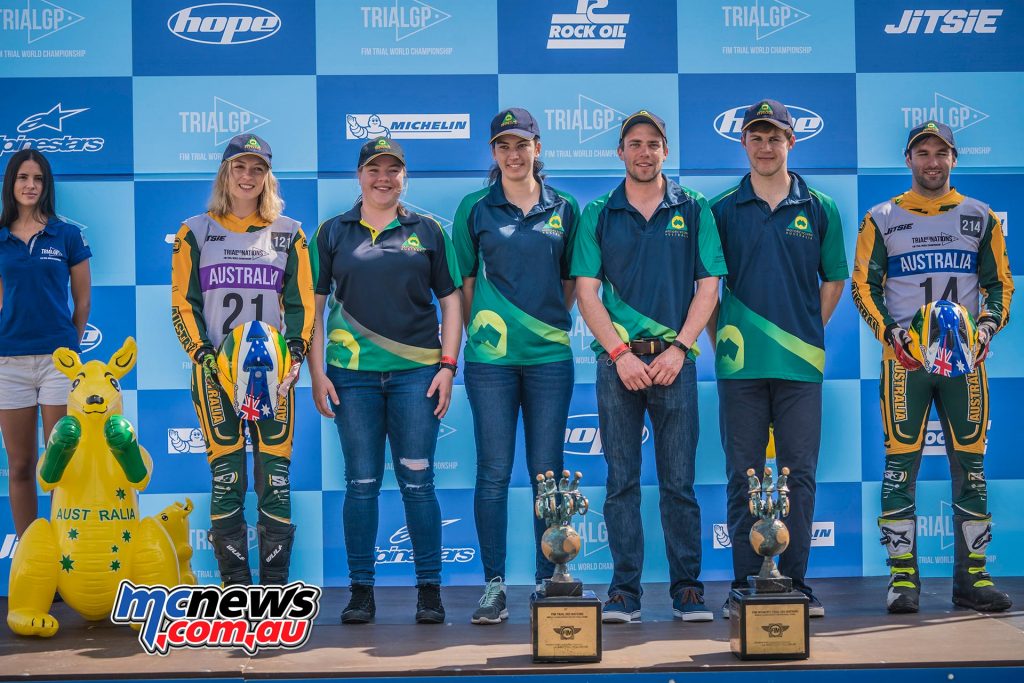