Glenn Allerton is a three-time Australian Superbike Champion and along with Josh Waters would love to claim a fourth, however the last two years have been fraught with well documented injuries for GA.

He is now fully recovered and ready to launch a major assault on the 2019 title. This year he has the new BMW HP4 coming to the Next Gen Motorsports team and they have also switched to Dunlop tyres.

MCNews: First test for the year, is it your first hit-out that you’ve been on the bike, or have you been testing like some of these other guys?

Glenn Allerton: “We’ve been to Wakefield about a week ago, and were still trying to make up our mind with which tyres to go with, between Pirelli and Dunlop. Basically we just want to go with whatever gave the best chance of winning we can get. We had a really good test, I did a bloody competitive race run there, that would have been racing for the win versus what we had printed off as the race time there, and we were fast. I felt really comfortable on the Dunlops, which is why we decided to go with them, because the feeling is really good, and they’ve got some new stuff.”

MCNews: Nothing to do with the fact you’re racing in the Asian Championship and there’s Dunlops there?

Glenn Allerton: “At this point in time, we’re not actually racing in the Asian Championship, so I don’ really know what’s going on, we haven’t made up our mind as we have some budget problems for Asia. At this point, it’s on hold, so I don’t know what’s going to happen with that. I’ll have to wait and see what the boys come up with. It’s a tough situation, that one, because they committed, and then the budget sort of got changed a bit and now we’ve got to scramble to try and make something happen. But the tyres are a lot different over there, to what we have here, so it’s really difficult to even compare. Riding on the tyres they have there and then the Dunlops we have here… It’s as different as between Dunlops and Pirelli’s here, they are that much different. The diameters are different and everything, the grip level is different…” 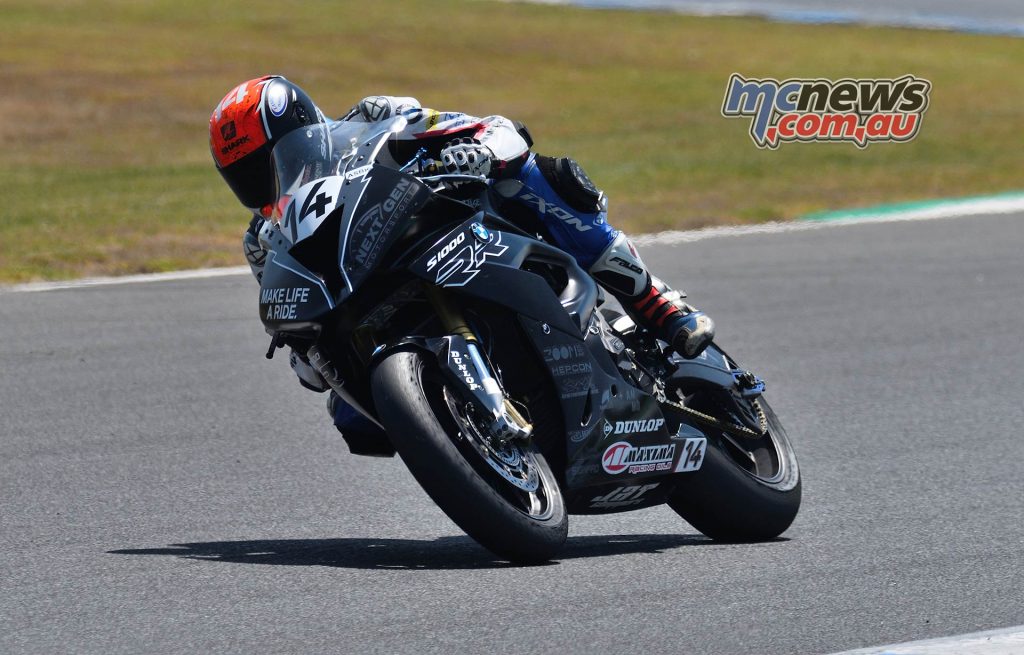 “So we had a really good test there at Wakefield, and we haven’t changed that much really, we’ve just come down here and actually ridden on the tyres that Dunlop have for Phillip Island, but we seem to be going pretty good. I expected some teething problems, as there’s a few diameter differences with the tyres, and while Dunlop has some new stuff coming, that’ll be here after Round 1, we’ve just got to try at the moment. We’re a little bit in the phase of trying to set the bike up for the tyres that they currently have, but we already know that the tyres that are coming are a step better again. We know we’ve got a good setting, good feel with those tyres at the moment, so we’re just trying to make do with what we’ve got available for Phillip Island, because this place is so hard on tyres.”

MCNews: With the Dunlops traditionally as it gets hotter, they work better. Today got hotter but the wind got up?

Glenn Allerton: “The wind definitely got up, earlier in the day I was always in sixth gear in the straight, and sometimes in that last session I was only getting to fifth gear, and not even getting sixth gear. Which is a pretty good indication of how much the wind is pushing you. I’ve had some struggles today, with the front brakes, I had problems all mornings and just with the feel being different every time we move the front brake lever. We’re trying to get on top of that with some different pads and different material. We’re going to change the discs, and figure out what combination is going to work, because the front brake pressure is always feeling odd. And then we had a couple of other issues along the way, today wasn’t smooth sailing, but I kind of knew we were going to be in this situation of chasing our tail a little bit, with the se-tup. Just because of how different the tyres we have to run here are, the shape and the diameter, they are a lot different to the other ones we tested on at Wakefield.”

MCNews: So Dunlop have done something similar to Pirelli with the bigger tyre?

Glenn Allerton: “I think what’s actually happened with Dunlop is they are actually going the other way with the new tyres, they are smaller in the rear, whereas Pirelli are going bigger. Our bike works really good on the small tyre and that’s the direction we’ll be going in. It’s not a small tyre, it’s still a 200 series, it’s just a different shape. Not quite as big as the tyre we have to use here. So the bike handles really good on that tyre and that combination is awesome. The outlook for the year is great, but we’ve just got to get through this first round. The start of the season is going to be like that for us – as we’re still on the old bike, we do have some new parts coming, we’ve just got fresh engines coming basically.”

MCNews: You’re not on the HP4 are you?

Glenn Allerton: “No, this bike that I’ve got here, it’s done some kays, the one I’ve been testing I believe is a 2016 model, the team has had it for quite a long time. We’re just getting through this weekend and the race, with some fresh motors. The outlook is actually good with the new bike and at that point, Dunlop will have the new tyres.”

MCNews: When is that expected?

Glenn Allerton: “The possibility to race it could possibly be Round 2, but none of the kit racing parts will be available like the wiring harness, the ECU, and all the suspension, which won’t probably be here until Round 3 at Tailem Bend. So we’ll definitely be on it at Tailem Bend, but I’m hoping we can make some stuff happen, and get it to Wakefield, but we’ll have to wait and see.”

MCNews: And the biggest difference from Pirelli to Dunlop, what have you got to adapt to?

Glenn Allerton: “Well it used to be the front tyre, but the new Dunlop front tyre is really good so it’s a lot softer than what they currently had, and it gives you a lot of confidence. Just the rear tyre is a lot bigger than the Pirelli, the new Pirelli is bigger again, so maybe they are around the same size, but the one we’ll race on here at Phillip Island is quite big. It’s changed the geometry of the bike, so we’re trying to adjust it to suit.”