Tomac had a 28-point lead over Baggett and a 30-point lead over Musquin heading into Ironman. A new player in the game, Jeffrey Herlings, set some blistering laps in qualifying earlier in the day.

Blake Baggett has done all he can the last portion of this series after his thumb injury. They’ve ran velcro on the grips the last couple weekends, and upped the ante to some sticky spray substance on his gloves.

Musquin has done some serious damage to the points, winning several of the last motos. The only thing that was left to do was go racing. Check out the break down from each moto below.

Herlings came out strong to take a commanding win in Moto 1. Tomac, needed to get out front early and put down a mistake free moto. He nailed the first part and got off to an excellent start by taking the holeshot (his first of the season). Tomac had Baggett and Musquin, both championship players, hot on his heels going into the first turn. Quickly, in the blink of an eye it seemed, Herlings rips by, headed straight to the front.

Tomac was charging to compete with Herlings only to go down hard at about five minutes into the moto. Red Bull/KTM’s Herlings came into this race with no time on the bike, and was a last minute decision to race the event.

Herlings’ presence in this moto definitely had an effect on how this moto would turn out. With Tomac going down, this placed Musquin into second and Baggett into third keeping the championship battle alive.

Halfway into the moto, the Red Bull/KTM squad controlled the race with Herlings and Musquin going 1-2. Meanwhile, Tomac spent a lap or so trying to straighten up his bike from the crash.

Musquin was riding on the bitter edge in this moto, but he seemed to turn it up shortly after halfway getting on Herlings rear wheel. Musquin made a couple small mistakes allowing Herlings to break away. Herlings pulled away late in the moto.

In the end, Jeffrey Herlings came out swinging to win his debut race in Lucas Oil Pro Motocross Championship. Musquin gets second place and Baggett takes third. Newly added MXoN team member Cole Seely put in a solid moto finishing in fourth place holding off Tomac who never really got going again after that fall early in the moto.

This means that Tomac could not lock up the championship in the first moto, taking the title fight down to the final moto of the season. As Baggett said, “we are keeping things interesting.” With the level of “unknown” variables in Pro Motocross, Moto 2 will likely be a real nail biter.

After that first moto, the championship was not done yet. Jeffrey Herlings comes out and takes a commanding win. Tomac makes a huge mistake and goes down ending up with a fifth place finish. Meanwhile, Baggett and Musquin would finish top 3.

This would lead to a final moto battle for the championship, and even though Tomac did have a decent lead, you know anything can happen in this sport.

In the championship deciding moto, Blake Baggett rips the final holeshot of the year with Cole Seely and Marvin Musquin right there on his heels. Baggett and Musquin were truly doing everything they could to make this title fight interesting.

Tomac was running 12th place and was still there at the end of the opening laps. Herlings went down on the start and had to start from 39th place.

Musquin made the pass on Baggett and began stretching it out on the rest of the field. Justin Bogle had a much better moto and was running in fifth place early in the moto. Nine minutes into the moto, Jeffrey Herlings had already made his way up into the top ten making his way past Tomac for 9th.

At the halfway point, Musquin still had a controlling lead but Baggett wasn’t letting him go. Herlings made his way passed Cole Seely for third, and was clearly setting his sights on the leaders. The track was getting really rough but Herlings was mastering the deep ruts and charging to the front.

Tomac finally worked his way around Christian Craig taking 7th place as the moto began to wind down with just under ten minutes to go.

As the moto was coming to an end, Tomac had settled into the 6th place spot that would assure him the title as long as nothing out of the ordinary happened. Marvin Musquin with two laps to go makes a bizarre mistake and goes down and off the track. Herlings, who had reeled him in within around eight seconds took the lead after the fall.

“It’s pretty unbelievable, it’s going to take a little more time to sink in, but it has been a long time coming! We have had to overcome a lot together and I just came in ready and fired up to get it done for the entire Kawasaki team.”

Marvin Musquin and Blake Baggett tried to prevent it and did exactly what they needed to do by finishing ahead of Tomac, but in the end it just wasn’t enough to fend him off for the title. Marvin Musquin put on a great ride, showing signs of that European style on a very rough track but throws away the win with just laps to go.

What a day, and what a season. Such a tight title fight going down to the wire, with so many ups and downs for the riders in the chase. Herlings comes in from Europe at the end and makes an amazing debut winning both motos and coming through basically the entire field.

Baggett fights through the pain and trying to place himself in good positions for the bigger picture every weekend. Everyone truly laid it all out on the line — in both classes this summer.

“I’m really happy—fastest in both practices and won both motos! The second moto was a bit unfortunate with the start, but I went from last to third then got lucky with Marvin going down. But I went 1-1 so that’s all that matters. For my first race here in America I think it’s pretty impressive and I’m happy with it. The team was amazing. To put a bike together in such a short time, and only having one day of testing – they were great. I was very thankful to work with the whole crew. They were amazing to me. It was a great weekend and I’m looking forward to the MXGP next week.” 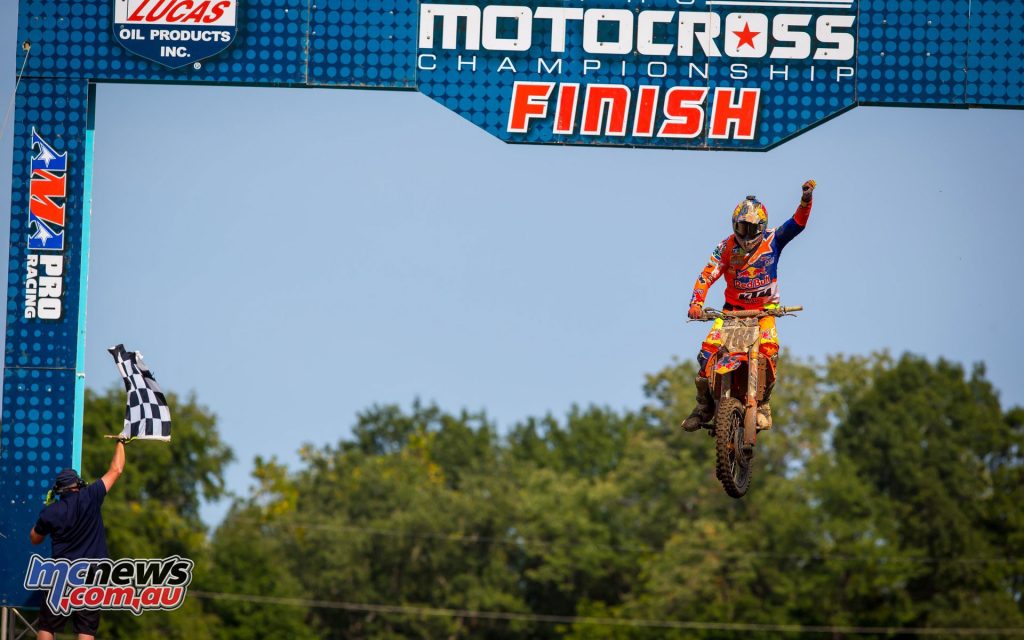 “Indiana was great. I was a little off in practice but I made some great progress in the motos. I was closing in on Jeffrey in the first moto and it was a good feeling. It would have been tough to pass him because he was fast and had good lines. I still finished second, which is good. Then I was leading in the second moto and, unfortunately, made a mistake with two laps to go. I came up short and lost control of the bike then went down. It was a bummer because I really wanted that overall, but I still showed people that my riding was good. Second overall is still great. The goal today was to get second in the championship and that’s what I did. I won four overalls and many motos this outdoor season – so that was a big step for me this year. Thanks to the whole Red Bull KTM team for their effort. I never gave up, even with injury, so I’m proud of that.” 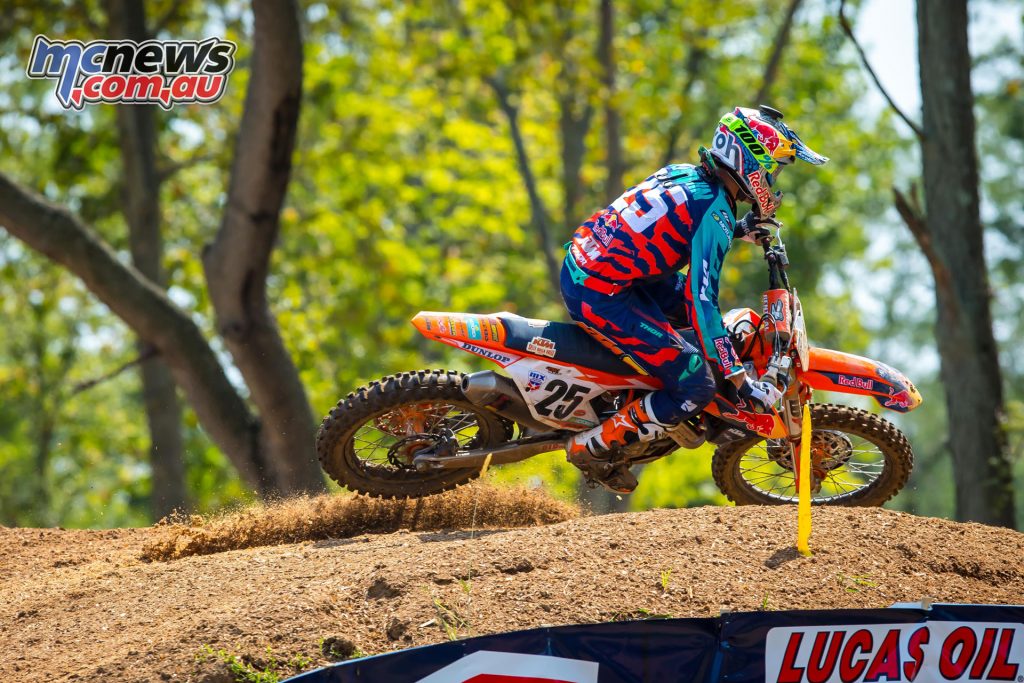 “I came into the day pretty under the weather and sick. I didn’t have any energy and felt really depleted, which made it one of the hardest races I’ve ever done. I still got fourth overall in points, and I’m looking forward to having a great off-season and coming back strong. My goal was 29 races, and I did that. I definitely want to step my speed up. Right now I’m going to focus on getting some rest so I can have a great Motocross Of Nations.” 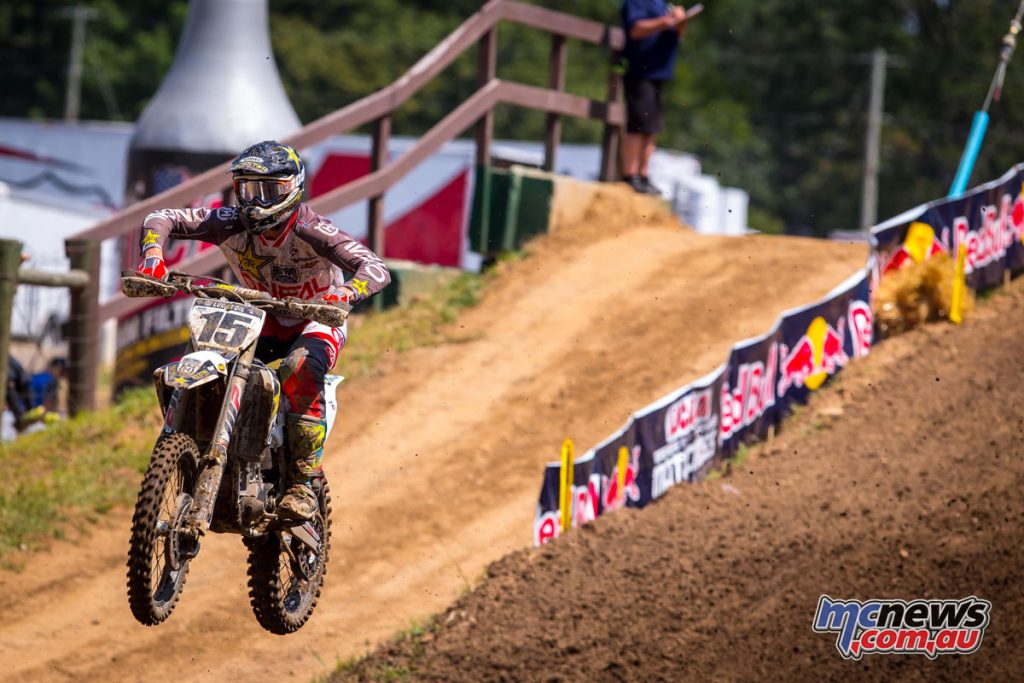