Appaloosa let loose on the ice 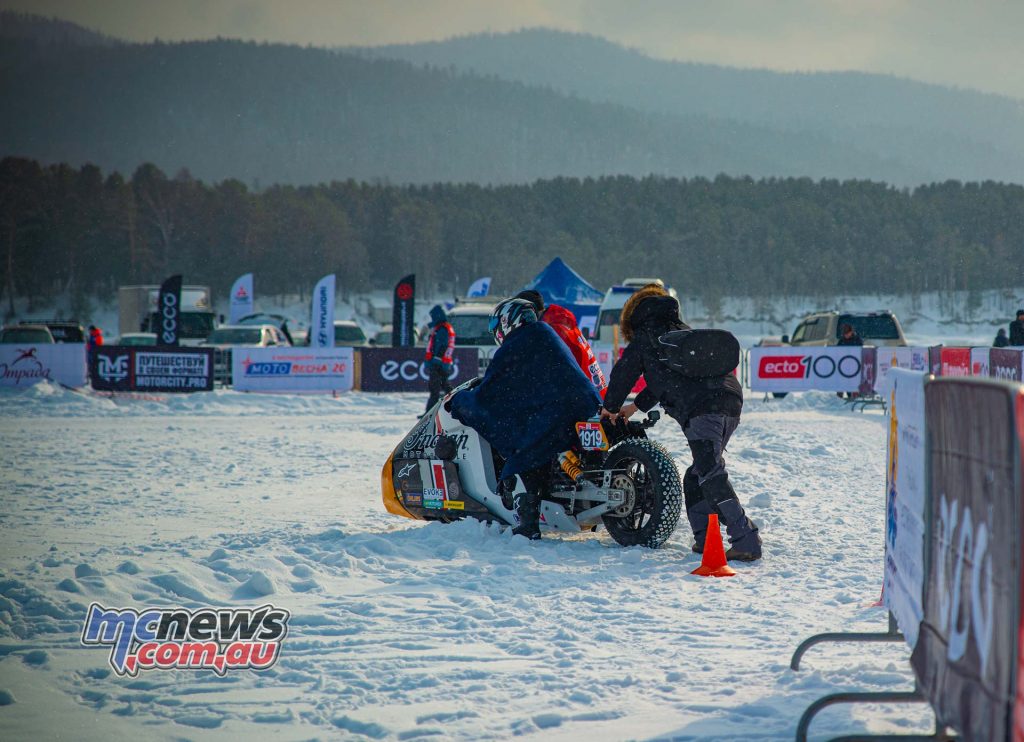 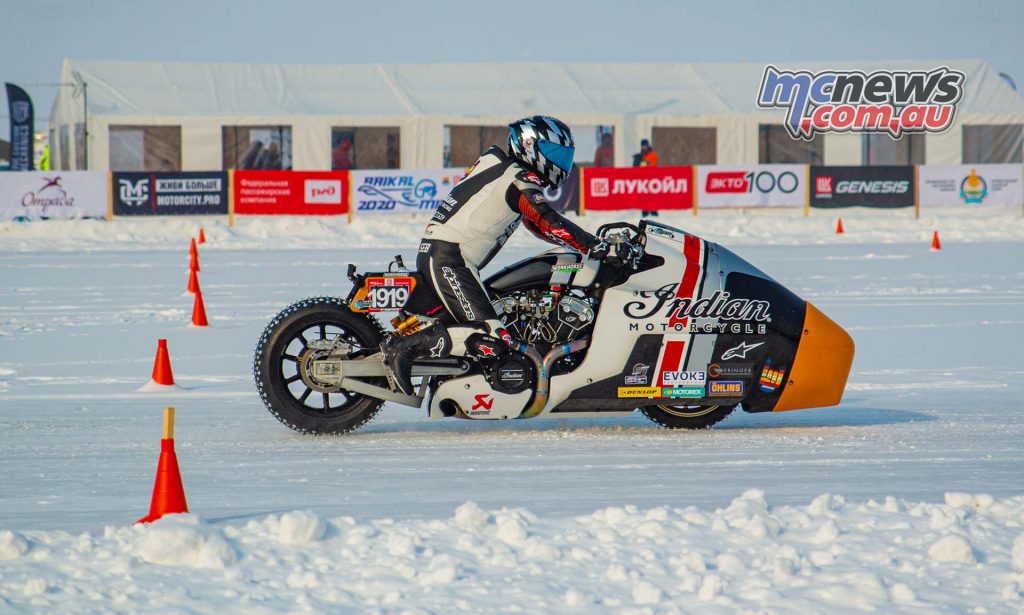 Appaloosa was originally built by Brice Hennebert for the 2019 Sultans of Sprint tarmac series with 500cc Grand Prix legend, Randy Mamola at the controls. With the original build taking over 700 hours, there was little time for testing before the first round in 2019 and so Brice wanted a shakedown test going into the 2020 series. 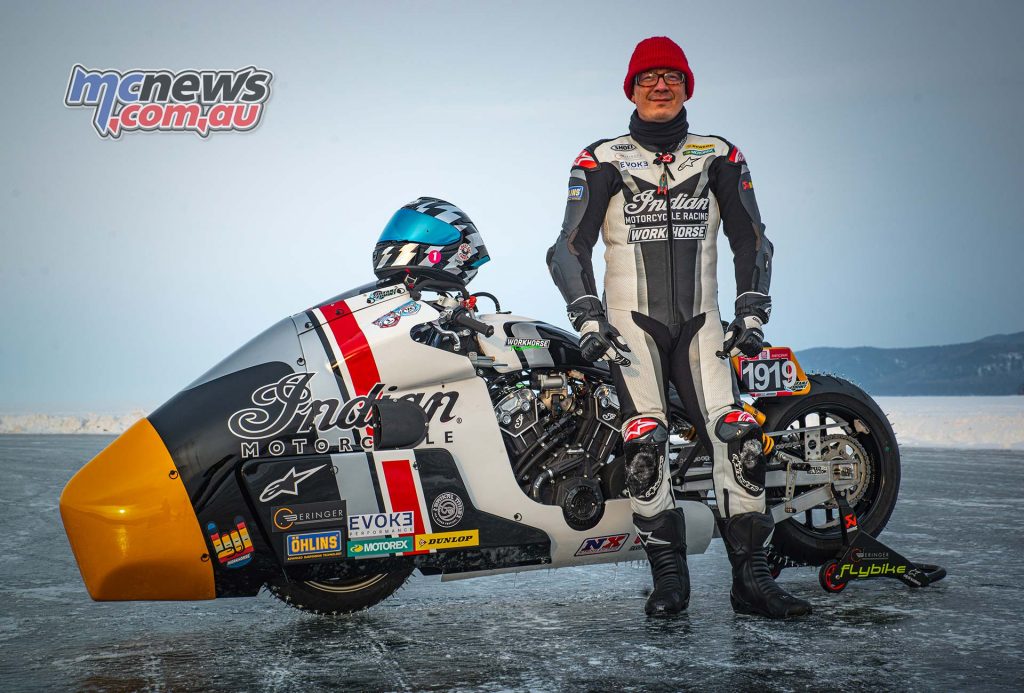 During his time researching events for a shakedown, Brice came across images and videos of a crazy speed festival, the Baikal Mile, run on the frozen surface of Lake Baikal in Siberia, the oldest and deepest lake in the world.

“I couldn’t believe how amazing this event looked,” says Brice. “For a start, the lake is huge. Over 600km long, 80km wide with more than 20% of the world’s freshwater. It was just so different from anything I am used to, thousands of miles away and with extreme temperatures. On top of that, you have all these people building crazy machines, from mad one-wheel contraptions to luxury vehicles on tank tracks, who come together to share the fun of pushing themselves and their creations to the limit. I just had to be a part of it, and it was amazing to get the go-ahead when I put the idea to Indian Motorcycle.”

With the go-ahead and continued support from top-level partners Akrapovič, Beringer Brakes, Dunlop Europe, Evok3 Performance, Motorex, Öhlins and tuning advice from Flybike, Appaloosa was modified for the extreme Siberian conditions on a tight schedule as it needed to be shipped by the beginning of February to make the long journey to Lake Baikal.

Brice and two of his best friends, Sébastien Lorentz and Dorsan “DJ Peeta Selecta, also had their own epic journey just to reach the event. The first leg saw two flights from Belgium to reach Moscow where the team had an overnight stay before continuing the journey. While in Moscow, the friends decided to get a permanent souvenir of their adventure with a special Tattoo. 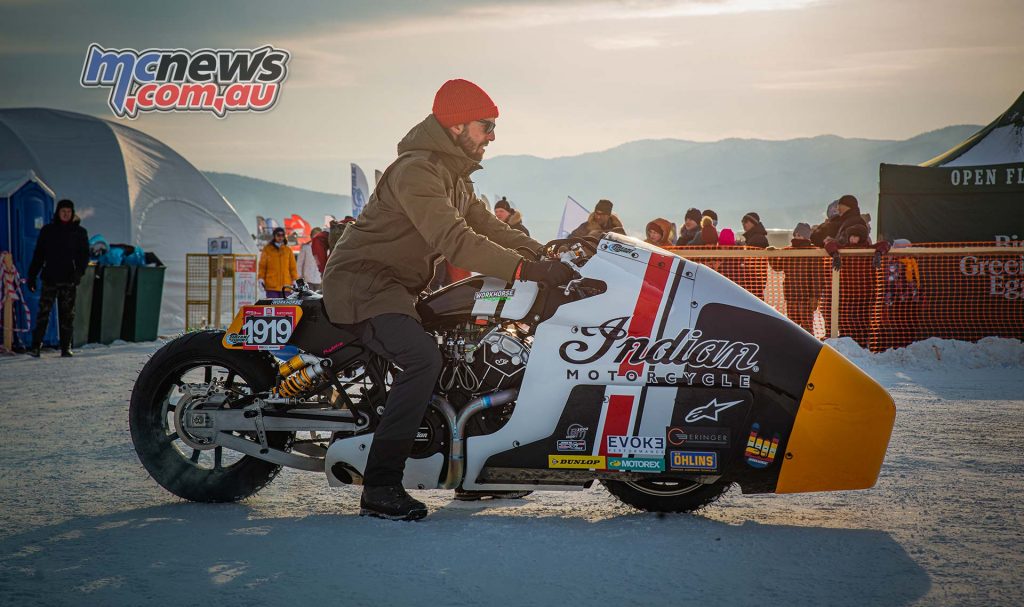 “I had been talking with Seb and Dorsan about how this trip was the most insane thing I had done and how I wanted to do something special to remember it,” explained Brice. “That’s where the idea for the tattoo came from. For Seb and Dorsan to also want to get the tattoo shows me that I had chosen the right guys for this trip.”

“I can’t believe that an ordinary guy like me gets to build such a crazy machine and then take it to such an extreme event,” Brice continued. “I had this phrase in my head ‘Good for nothing. Ready for everything’ that summed up this feeling and I decided to get it tattooed on my leg in Russian. Seb joined me with a matching tattoo, while Dorsan had the phrase tattooed in French.” 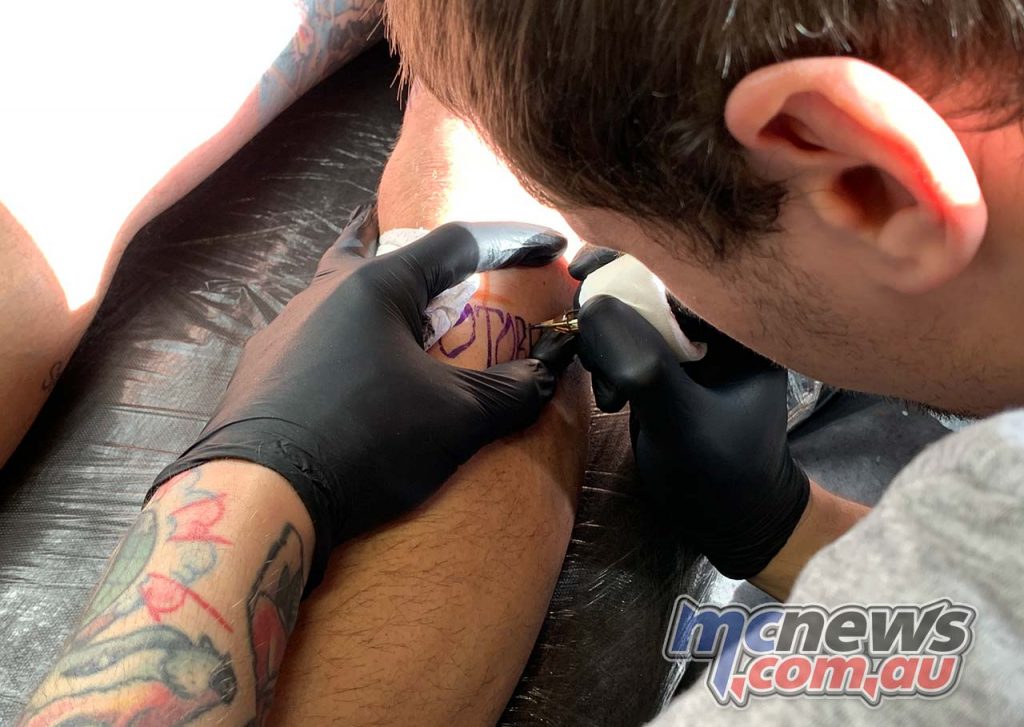 Freshly tattooed, the team took an overnight flight further east to Ulan Ude before joining other competitors for a 5-hour coach journey to the event’s base in Maksimikha, Republic of Buryatia. Arriving at the event hotel, there was no time to rest with competitor registrations and briefings before Appaloosa had to be unpacked from its special flight cases and re-assembled ready for technical inspection in the morning.

The team’s paddock garage for the week was a canvas and cloth tent with a wood-burning stove inside. With temperatures often dipping well below -25C, the stove was essential to keep Appaloosa and the team warm enough to work and operate. Sharing the tent with the Workhorse team were two Russian vehicles and their teams, a tiny home-built bike with a lawnmower engine and a classic Ural. 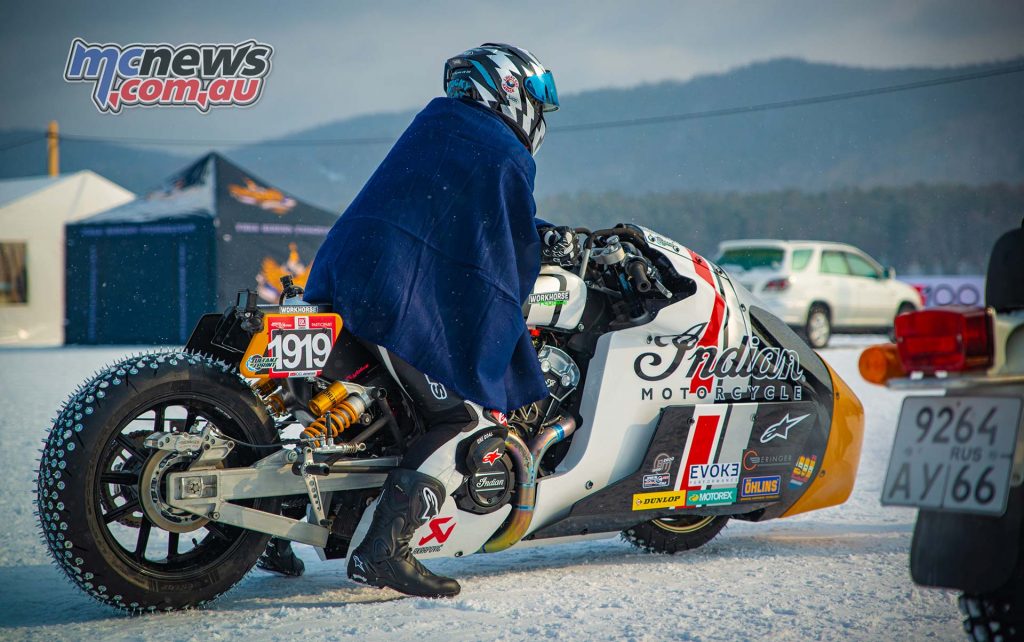 Brice commented, “They didn’t speak any English, we didn’t speak any Russian, but as with all car and motorcycle enthusiasts, it was a really friendly atmosphere. Through hand gestures and pointing, we were able to communicate, help each other out and lend each other tools. That’s what I love about events like this, we’re all here for the same reason and we all want to share the fun and make sure everyone has a good time.”

Technical inspections completed, Appaloosa and Sébastien Lorentz were given the all-clear to try their first test run on the 1/8-mile course, a final qualification step for the organisers to be sure the rider is in control and safe, before being allowed to run at speed on the Baikal ice.

“The first run was good, I was just looking to test the traction of the studded tyre that Dorsan had built, to see how stable the bike was, and of course, to make sure I could stop,” said Sébastien Lorentz. “Appaloosa pulled really well, and the front tyre was not being pulled by the uneven surface. With good control, traction and stability, it has given me the confidence to go harder in the next run.” 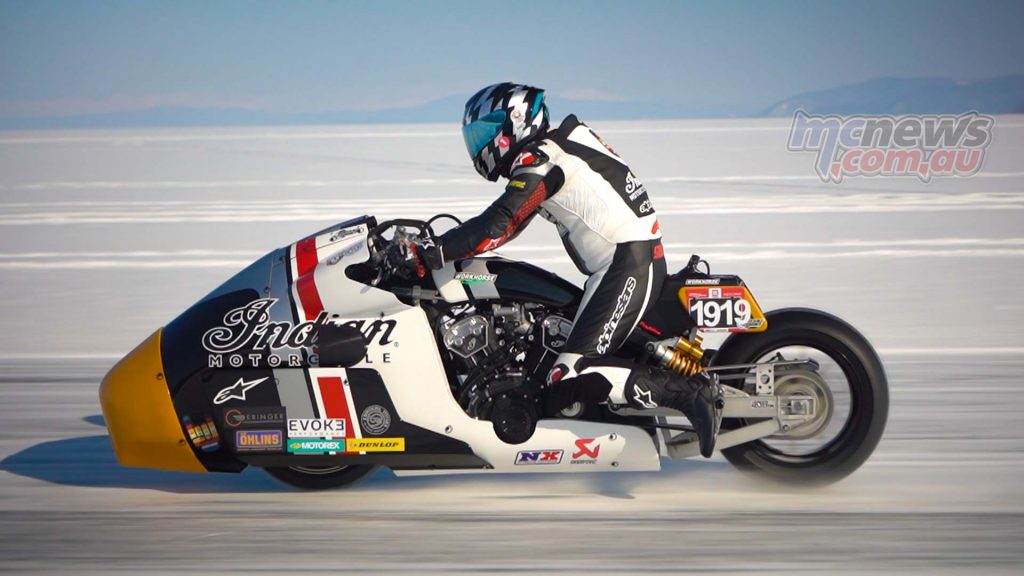 With another quicker run on the 1/8-mile, Brice and Seb agreed it was time to test on the one-mile course. Although a standard race distance for speed runs, there is a specific reason for this distance at the Baikal Mile festival; Lake Baikal is the deepest lake in the world with a maximum depth of one mile.

The first run on the full mile revealed surprises that the team were not expecting, particularly that the ice was much bumpier than the short 1/8 mile. The front and rear suspension compressed enough to bring the tyre studs into contact with the fins of the real tail unit and a front fairing cross member, requiring some modification to the bodywork to allow for clearance. Limiting the top speed of the bike was an unknown electrical issue at higher speeds in the top gears.

“We knew we’d be facing issues we couldn’t really predict as we have no experience of racing on ice,” commented Brice. “I’ve spoken to teams here who have run perfectly at Bonneville and then the first time they came to Baikal, their machines just wouldn’t work properly due to the extreme conditions.”

“With just that one run, we have learnt so much about ice speed racing. With that experience and the helpful advice and suggestions from the teams around us, we’ll make some changes before tackling the mile again. On the electrical issue, I’ll initially remove the quick-shifter and Power Commander, hopefully that will resolve it. We’ll increase the rear tyre pressure from 2kPa to 3kPa, and Dorsan is also going to prepare a new rear tyre with fewer studs for less weight.”

A second run on the ice mile saw improvements from the changes in tyre pressure and the new stud pattern, but the electrical issue persisted.

“Right now, I think this is simply down to the extremely low air temperature. We are using a race ECU and maps that were not designed for -20C. For the final day of racing, I’m going to reset the ECU and make some tweaks to see if I can improve things. But, with the limited shipping space, I just don’t have the spares or tools to fully diagnose the problem here at the ice.” 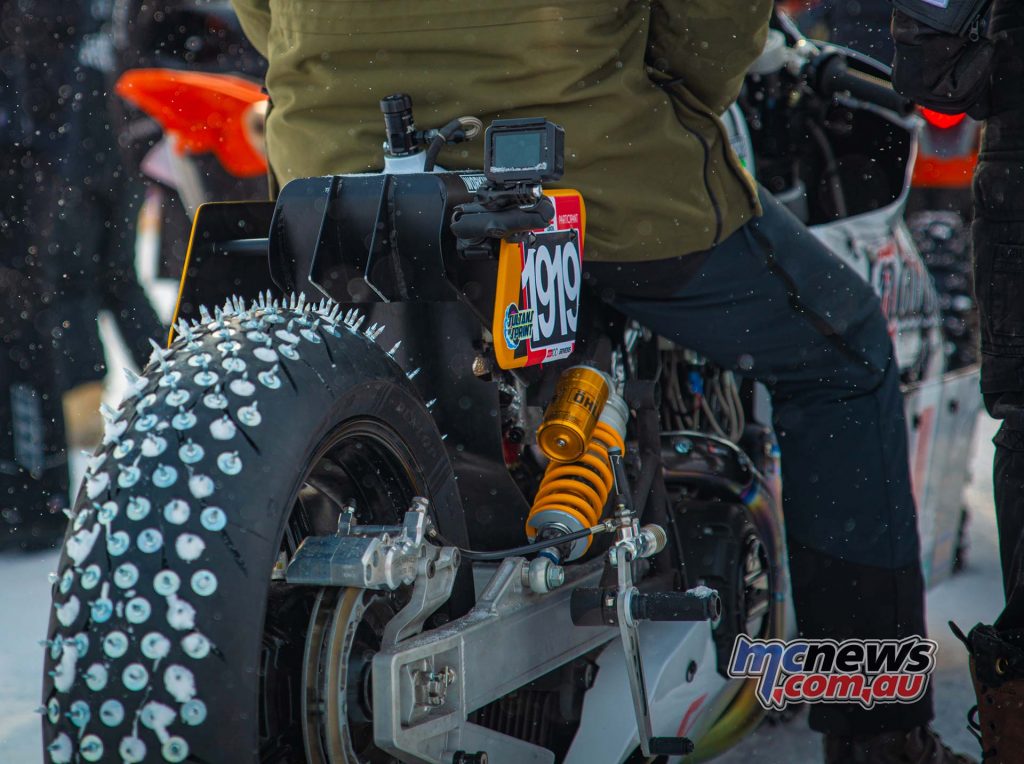 On the final day of racing, teams woke up to the best conditions of the week with blue sky and bright sunshine. Heading to the start line for their first run of the day, Brice and Seb had decided that this would be the main pull and they would use the NOS system for the first time in the hope that the changes that Brice had made in the morning had resolved the electrical issue.

A clean start saw Appaloosa accelerate cleanly down the mile before the electrical issue limited their top speed. The run saw their best result yet with a top recorded speed of 180kmh, just short of the 200kmh target that Seb and Brice had set for themselves. With one final run to enjoy the experience of having come so far to do something so extreme, the team reflected on their experience.

Brice said, “Racing on ice is hard, this is the most incredible thing I’ve tried to do. I’ve learnt so much and had a hell of a lot of fun doing it. We’re losing something like 30% of our speed to the conditions and although we’ve had some issues, I am so glad we came here to test Appaloosa. My mind is racing with the possibilities and changes I’d like to make. Thank you to the organisers of the Baikal Mile and everyone here who has made us feel so welcome and part of their ice racing family. Coming here was a huge adventure for all of us and it was all about challenging ourselves, making new friends and having fun at the same time.”

Sébastien commented, “Appaloosa is clearly capable of so much more, and I know that Brice will be using this experience to attack the 2020 Sultans of Sprint as hard as possible. We’ve been welcomed with open arms by all the people here who share our passion for adventure, fun and machines that go fast or just make people smile.” 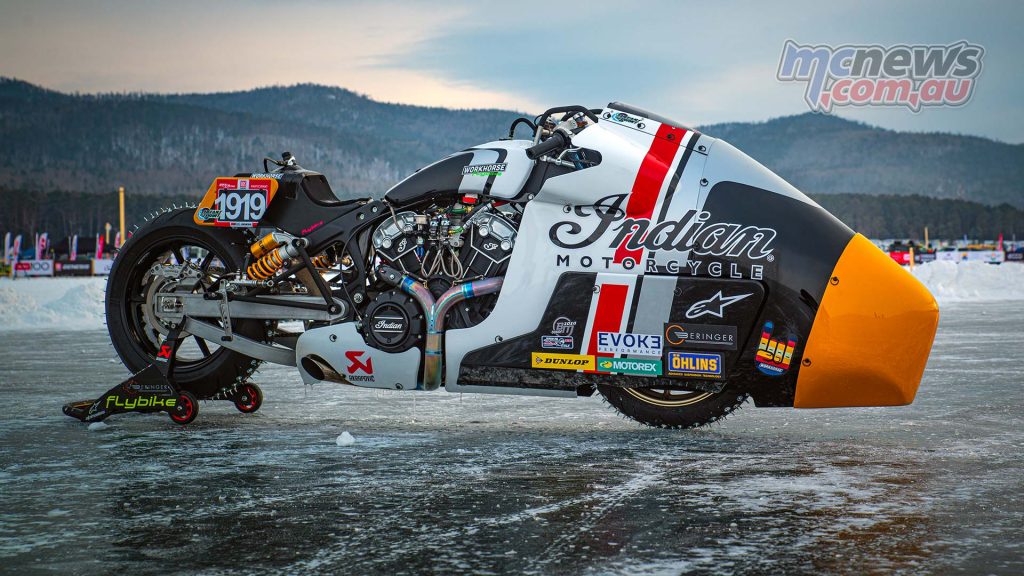 Ticking another ‘first’ off their lists, Brice and Sébastien joined Dorsan “DJ Peeta Selecta” on the decks to provide the music during at the closing party held on the ice.