There’s never been a better time to get your hands on Indian’s new FTR 1200 S, including the highly sought after Race Replica, thanks to a special offer of $2000 worth of genuine accessories to be selected by the lucky new owner, with Indian celebrating another year of AFT Twins domination.

The Indian FTR 1200 was created to pay homage to the marque’s flat tracking heritage which saw the Indian Wrecking Crew take home the championship in 1951, ‘52 & ‘53, with the FTR 1200 range designed to bring this heritage to the streets.

A motorcycle born on the dirt and built for the street, a winning legacy and progressive technology offer 120hp at your command, and with four levels of customisation the FTR 1200 will suit any riding style.

To show just how serious Indian Motorcycles are, those who had purchased the FTR 1200 in the months since its launch were also sent a $2000 voucher to be used on parts and accessories for their FTR or Indian apparel, rewarding them for their support of the launch of the FTR.

You can check out all the details on this special offer at the following link:  https://www.indianmotorcycle.com.au/special-offers/ (link).

A trellis frame stands out on the FTR 1200, with an alloy sub-frame and offset rear monoshock, while inverted 43mm forks adorn the front end and are fully adjustable on the S model, with the rear shock upgraded to include a piggyback reservoir and is fully adjustable.

Stoppers are a set of Brembo monobloc M4.32 calipers on generous 320mm rotors on the front, with a P34 twin-piston caliper grasping a 260mm item on the rear.

LED lights are also featured on the FTR 1200, with a 4.3-inch colour LCD display on the S-model, with bluetooth functionality. An IMU facilitates traction and wheelie control, alongside lean-sensitive ABS.

Check out the Indian FTR 1200 specs below: 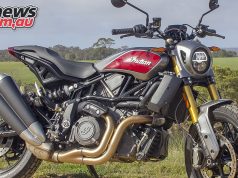 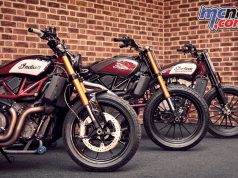 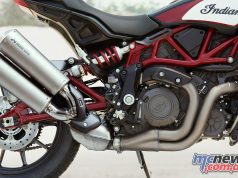