World superbike rider, Northern Ireland’s Jonathan Rea, and his Australian wife Tatia have given birth to their first child, a baby boy. Named Jake Elijah Rea, he was born September 27.
Delighted mum Tatia, from Phillip Island, announced the news on social media site Twitter, saying: “@jonathanrea and I are so proud to introduce Jake Elijah Rea into the World this morning. He’s already a wee star!”

World Superbike rider Rea responded to well-wishers on Twitter, adding: “Humbled by the response and lovely messages for the birth of our little Jake! @tatiarea and I are both so proud to join the parent club!”

Rea is currently recovering from injury after breaking his femur in a crash at the Nurburgring in Germany.

The 26-year-old Pata Honda rider will remain in the World Superbike Championship in 2014, confirming today that he will not move to MotoGP.

Leon Haslam will also remain with Pata Honda in 2014 and it looks like next year’s pit garage will be crowded with babies, with Leon and his wife Oli giving birth to their second child, Max Peter Haslam on August 12. 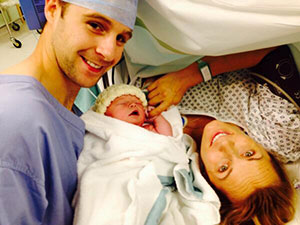