After three demanding weeks, with consecutive races in the Netherlands, Germany and Italy, the Repsol Honda Team have concluded with a positive day of testing at the Mugello circuit.

The Honda factory team were back on track this morning to test a new engine and a new prototype that HRC has developed, aiming improve performance of the RC213V.

Both riders reported some positive feedback and the HRC engineers now have valuable data from the factory riders to take back to Japan for evaluation.

The Repsol Honda Team can now enjoy a small break before taking to the track in Laguna Seca for the US Grand Prix on the 29th July.

DANI PEDROSA 2nd 1’47.549
“We tested many things today and I’m happy because we found some positives with the new engine and also with the new chassis that can help us in the second part of the season. I was really hoping for some improvements after the issues we have had with the extra weight, chattering and the front tyres and in this test we made a step forward. Honda is working very hard and I’m sure they will do their best to be able to supply us the new parts for Laguna and the following races, but we’ll see if it’s possible with the engine allocations; anyway, it would be very good for us. The engine is better into the corner, the engine brake is smoother and the bike is not so sharp when you close the throttle, so this helps you to get into the corner. I made my best lap time on my current bike; it’s normal as I’m used to it. With the new bike I made a mistake shifting gears and I had a small crash on my third lap, so I couldn’t do a longer run, but the feeling was also positive”.

CASEY STONER 3rd 1’47.551
“We had a new engine and new chassis to test today. With the engine we found some improvements, a little smoother and some more power. As far as chassis goes I didn’t find any real benefits, we tried many different things but couldn’t get a better feeling. There were a few small areas that improved but nothing in terms of performance or for the lap time, just a marginally better feeling under braking. It wasn’t really the test we were looking for, we had hoped to find something to help us get rid of the chatter and give us some more feeling in the middle of the corner but unfortunately we didn’t find this. If we can have the new engine with the current chassis, it’s the best combination, but we’re not sure if we can have it in time for Laguna Seca, we’ll have to wait and see”.

SHUHEI NAKAMOTO – HRC EXECUTIVE VICE PRESIDENT
“Both riders gave positive feedback with the new engine and we will do our best to provide it to them already next week in Laguna Seca. The new chassis has good points and bad points. Dani seems to like it and we will do our best to bring it for him at the next round. Casey doesn’t find what he was looking for in this new chassis; to reduce the chatter. We have some more ideas to solve this and we will continue working to improve our machine but we can be reasonably happy of today’s result”.

The post-race MotoGP test that concluded three intense weeks of racing and testing was blessed with a beautiful, sunny day that was warm but breezy.

Valentino Rossi and Nicky Hayden worked together with their respective teams and the Ducati engineers on a number of updates to the chassis, in an effort to balance the weight distribution; to the engine, to improve rideability; and to the electronics.

Valentino Rossi suffered a fall at the Correntaio that was due to a small problem with the ECU. Although he suffered no physical harm, the decision was made to finish his test early, before 4:00 p.m.

Nicky Hayden (Ducati Team) 4th, 1:47.746 (49 laps)
“We didn’t really have anything major to try today, but it was important in the sense that it’s the last time we’ll test before my two home races. We tried some things with the settings, and Ohlins had a couple of ideas that we tested. We lost a pretty significant amount of time after Valentino had his problem because the guys wanted to check everything on my bike to make sure it was okay. At the end of the day I put in a soft tyre to see how fast I could go, but then I had a problem with the fuel pump. We ran out of time, but still, my best lap was about the same as my qualifying time, which is okay. At this level, as we get closer to the front, it gets harder to make big improvements, but we leave here encouraged.”

Valentino Rossi (Ducati Team) 10th, 1:48.565, (19 laps)
“They had some things to try today, but it was mainly with an eye toward the future, as the substantial changes they’re working on at Ducati for the engine’s power delivery weren’t ready yet. So this was an intermediate step, an interim engine management system through a new ECU. We started testing it this morning, and the first feelings were good, as I immediately did a good time with a used tyre. However, when I started again after the break, the bike stalled at the Correntaio and I fell. Fortunately, I was leaned over quite far at that point so I just tipped over, and nothing bad happened. In the interest of safety, we decided to stop because the engineers have to analyze the data to understand what happened. We also had some different parts for the chassis, but we weren’t able to work with them much since we finished early. In the end, it wasn’t a particularly productive day, although the first impression with this change was pretty good.”

Filippo Preziosi, Technical Director
“This morning, with Vale, we started to try some changes to the chassis, work aimed at concentrating the mass and balancing the weight. Unfortunately, in the afternoon we had a problem with a hardware component, which we’ll have to check now. Given that safety is the most important thing, we stopped his test. Therefore, we only have his first impression, but based on that, we’ll continue with our schedule in order to bring some additional updates to the Misano test. With Nicky we didn’t have the same problem, and we were able continue the work. In the next few days, our test team will go forward with the work started by the factory riders.” 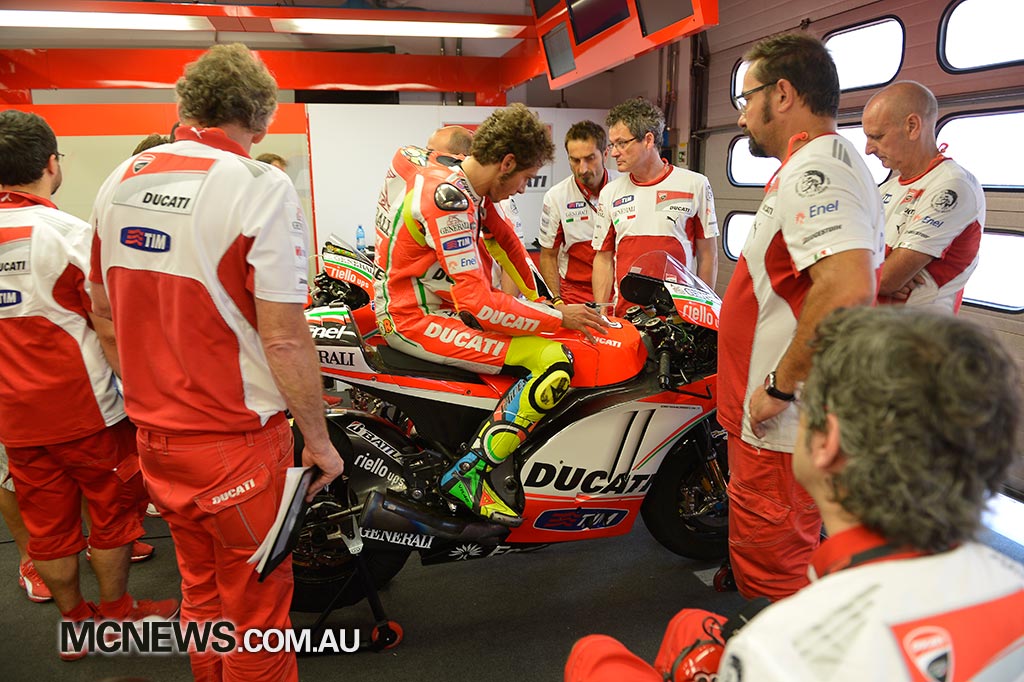