by Ryan
in Ducati Reviews, Features, Kawasaki Reviews
A A
Share on FacebookShare on TwitterShare

Back in July we ran a piece taking a look at how accelerative Dovizioso’s Ducati Desmocedici GP18 might be. We put some numbers through a supercomputer and what we got correlated somewhat accurately to what has been documented.

For some perspective, we also compared the Ducati GP machine with something a little more down to earth. The BMW S1000RR is one of the fastest accelerating production motorcycles to date. Anyone who has ridden an S1000RR will know just how much of a ballistic straight line performer the BMW is, though it is still no match for a dedicated GP bike, as explained in our earlier piece.

The only other motorcycle available to purchase that might stack-up would be Kawasaki’s mighty H2R. Technically, the H2R is a production motorcycle, but one that can’t be ridden on public roads, as the full powered H2R version can’t be registered. In some countries you could probably put lights and indicators on it and legally register it but definitely not here in nanny state Australia. Here you would have to settle for the less powerful, but recently improved and hardly run-of-the-mill, H2 road going bike.

In our original piece, we briefly compared the GP bike with the data available for the Kawasaki H2R that is readily available on the net. This time we thought it fitting to now run the H2R through our supercomputer and to see if our numbers measure up accurately to real life, while also providing a proper graph/visualisation of what it would like to have the two machines go head to head. 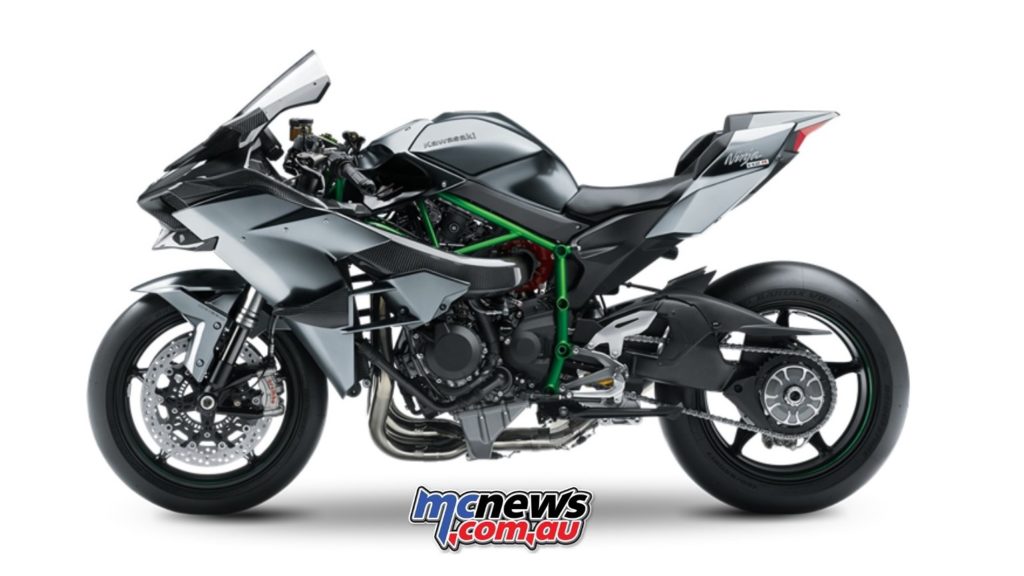 Lets first clear some things up. Kawasaki’s 326 hp at the crank claim falls rather short when measured at the rear wheel, with most examples of Kawasaki’s H2R knocking out anywhere between 230 hp and 245 hp, depending on the dyno and correction factors used.

Traditionally we see measured rear wheel hp figures around 12 per cent less than the manufacturer’s claims. This is normal, as due to frictional/transmission losses we expect to lose power. If we deduct a 12 percent loss to the Kawasaki’s claimed figure of 326 hp we are still left with 286 hp at the rear wheel, which is 40-50bhp more than what we typically are seeing on dynos. Before we accuse Kawasaki of exaggerated claims, bare in mind that most dyno’s can not replicate a 300km/h plus wind blowing into the air-box. Thus Kawasaki’s hp claim would not be a static claim but more like the power the H2R produces when flat-out, with full ram-air effect and with the supercharger at full efficiency.

Whether this brings up the H2R’s power to the 280s and matches the 12 percent loss is another thing, but we can certainly assume with good accuracy that the H2R will make a little more power when moving versus a static measurement on a rolling road. 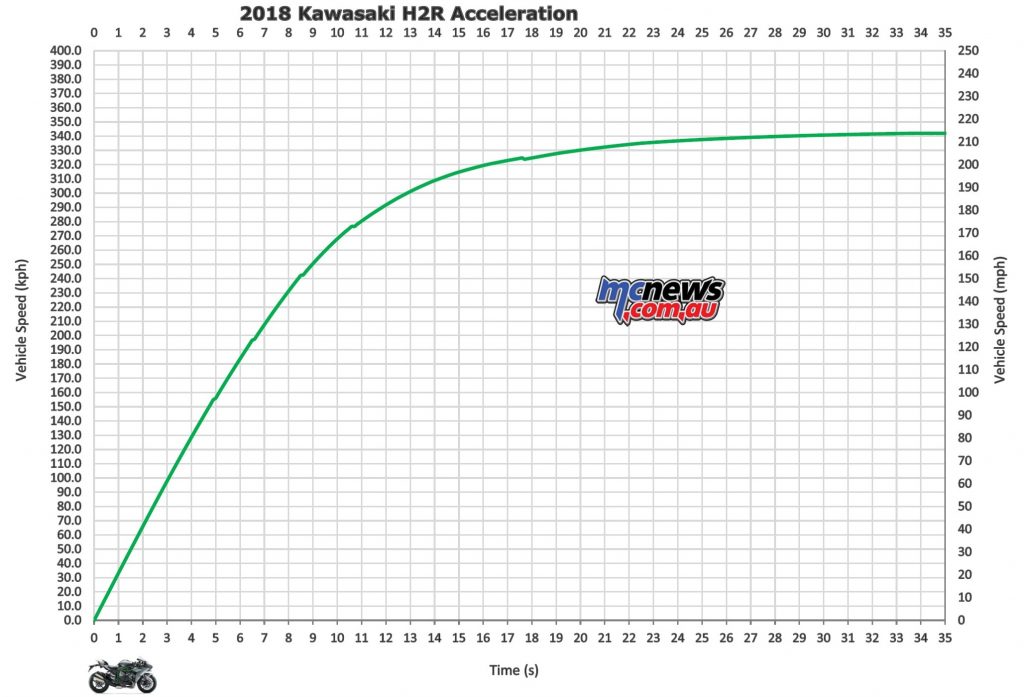 Now to the the main event. Let us just get straight to the point. The Ducati Desmosedici pretty much walks away from the H2R from the get go, much like it did to the BMW S1000RR in our previous comparison. Some of you Kawasaki fanboys no doubt may have thought the H2R would have put up a better challenge but put simply, from a standing start, it doesn’t.

As previously highlighted, the H2R is clearly hindered off of the line, and is not anywhere near as efficicint at putting its power down as the MotoGP machine. What is more impressive is that the MotoGP bike likely has 30/40 odd hp more than the H2R at the wheels, and is of course significantly lighter. It is a testament to the advanced electronic packages of a modern MotoGP bike that these machines actually convert their advantages into a staggering rate of forward motion rather than losing momentum via wheelie or wheelspin. 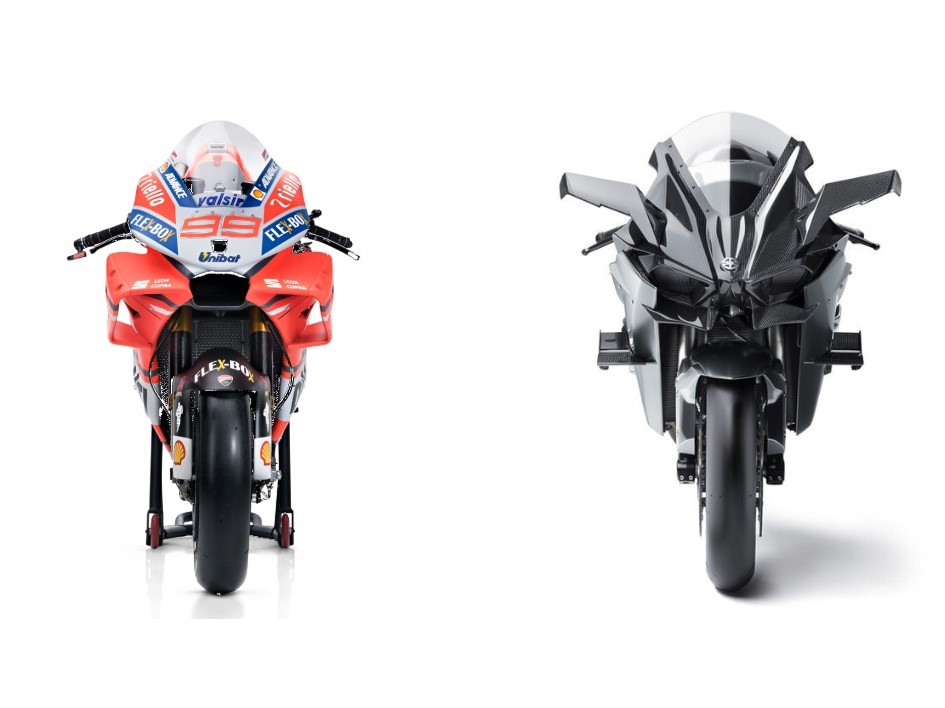 Maybe the H2R can compete once moving? Sure, it does much better, but still trails the GP bike by 2.54 seconds if rolling from 100-300, but only 1.84 seconds from 200-300 km/h. This clearly demonstrates the H2R’s traction hindering brustish power delivery.

The H2R comes closest from 200-240 km/h, tailing the GP bike by only 0.2 seconds and taking an impressive 1.70 seconds versus 1.51 seconds for the Ducati MotoGP bike. In a real roll on from those speeds, the H2R would only be trailing the MotoGP bike by a few bike lengths. Impressive stuff. 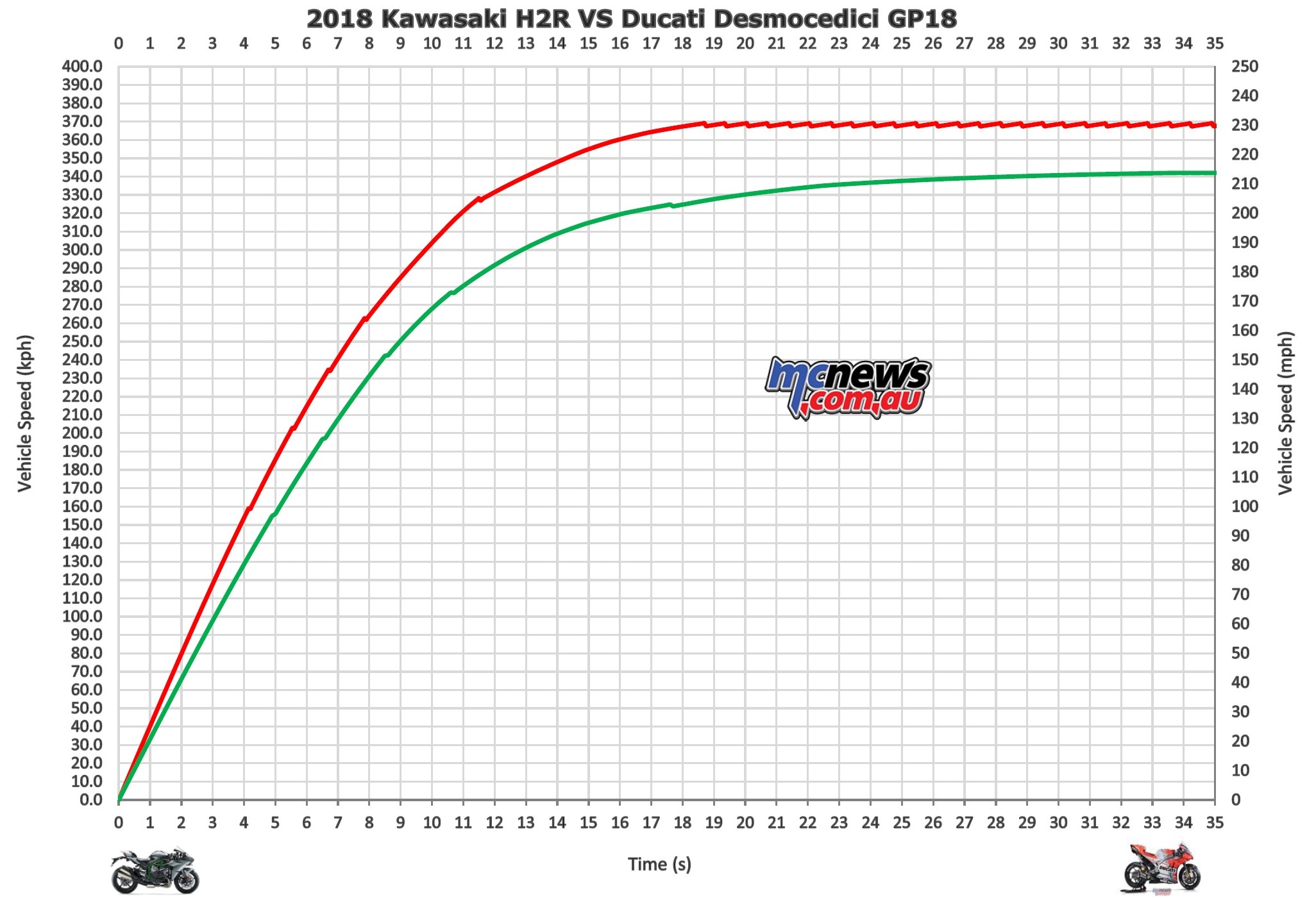 Kawasaki’s H2R actually makes for an interesting challenger to a MotoGP bike, as on paper, with its monstrous claimed 326 hp, it certainly qualifies as a worthy competitor. Kawasaki’s claimed 326 hp is a figure higher than even the highest rumoured MotoGP bike power figures we’ve heard of, which range from 280-300hp – claims that are likely at the wheel or gearbox rather than true crank outputs.

In this instance we have to work with rear wheel figures and the H2R’s 230-245 hp is somewhat off of the ‘326 hp’ claim. We all know that it’s not all that hard to get a modern sportsbike up to around 210 hp at the tyre these days. A Factory WSBK racer would be another 20 on top of that, even though recent rpm limits have neutered their potential a little.

WSBK bikes clock demonstrably lower speeds in the traps versus MotoGP bikes on tracks they share, underlining the power and electronic package’ advantages of the prototype MotoGP machines.

In our previous piece I made an assertion that a H2R would need at least another 40 hp at the wheel to have chance of being a threat against a MotoGP bike, and that claim seems to measure up, at least based upon our simulation. Still, that extra power would only really help the H2R once it was moving and would still be a hindrance off of the line, maybe more so versus the stock bike.  That extra 40 hp would have to be accompanied with some fancy electronics to enable that power to get down to the ground and translate into serious forward thrust.

The Kawasaki H2R is a wonderful machine and it is a surprise that in this day and age of health and safety obsessing, that a motorcycle as mad as this exists at all. Good on Kawasaki for having the balls to bring such a machine to market. Sure it is out of the reach of most, but the stock H2 can pretty much be upgraded to a similar level of its mad H2R sibling with some simple bolt-ons and a re-flash, taking the power up to 230 hp plus. Not that a stock H2 is exactly slow or really in need of more power.

The H2R is the the fastest two-wheeled thing from 0-320 km/h that you can buy, and is around 8-10 seconds faster than a Bugatti Veyron to that speed. The only four-wheel production vehicle that might compete would be a Koenigsegg Agera RS. The Koenigsegg is an obscene machine that would even give a MotoGP bike a run for its money. And it is totally legal, albeit a touch expensive, as if it came to Australia it would likely cost you about $5,000,000.

Food for thought maybe for a future comparison…

Ducati’s attempt to build a car | The DU-4