Carlton Dry Honda Thor Racing have come away from the second round of Super X at Wollongong’s WIN Stadium with mixed results after torrential rain once again played havoc with track conditions.

A wild electrical storm lashed the NSW coastal town just minutes before the finals were due to get underway, delaying proceedings for over an hour and forcing a late change to the race formats.

Showing great pace on a dry track earlier in the day, Cheyne Boyd qualified second in the Open class while teammate Gavin Faith posted the third fastest time in the Lites.

Faith and teammate Todd Waters breezed through their respective heat races but a spectacular crash left Boyd barely able to walk after sustaining severe bruising to his shoulder, back and ankle.

After spending an hour with Racesafe, Boyd courageously lined up for the last chance qualifier, earning his spot in the final after finishing second.

With both classes to contest a 15-lap final Faith was the first to take to the muddy track.

The young American, who was mid pack off the start impressively moved through the Lites field to third. While pushing hard to make a pass for second Faith went down in the whoops and lost a position.

“I felt really positive after my heat race,” Faith said. “I went down and came back from seventh to third and I was riding quite conservatively.

“The final was very muddy and the start-line was a mess. I got away in eighth and worked through to be challenging for second with two laps to go.

“Unfortunately I pushed too hard and went down in the whoops. It wasn’t the result I was after but I was happy with my pace in both the dry and the wet and I have moved up the championship standings to sixth,” he concluded.

While Boyd was cautious off the start Waters got away well but was pushed off track in the early stages of the race.

Fighting back from mid-pack Waters finished the race fifth and now sits sixth in the championship standings.

“I got a great start and was feeling really comfortable on the bike,” Waters explained

“While most of the guys were rolling the rhythm section I was doubling it but I got roosted and pushed off the track which put me right back in the field.

“Not the result that I wanted but I was happy with how I came back through in these conditions,” he said.

Despite struggling to walk to the start-line Cheyne Boyd showed great courage, battling severe pain as he negotiated his Honda CRF450 around the quagmire.

“It was really disappointing to crash like that as I felt quick out there and the bike was working so well,” Boyd said.

“I didn’t think I was going to get back out there but I knew I had to try and take home some points.

“The pain was insane, my ankle is swollen and I can barely walk on it but I will work hard to be fit for next weekends event,” Boyd stated.

Team Principal Yarrive Konsky acknowledged tonight’s results were not a true reflection of his teams potential.

“Overall it was a tough weekend,” Konsky said. “ These conditions make it hard for everyone – the teams, riders and the fans.

“The team is working really hard and the guys are riding much better than their results showed tonight. We will regroup and work towards Round 3.”

Round 3 of the 2011 Super-X Championship will be held at Campbelltown Stadium on Saturday 5th November.

JDR Motorex KTM continued its podium form in the second round of the Monster Energy Super X, Australasian Supercross Championship, at WIN Stadium in Wollongong on Saturday night, 29 October.

South Coast resident Matt Moss headlined the evening as he scored his second win in as many tries during the Pro Lites main event, extending his championship lead with a second win in a row to commence his title campaign.

The main events were reduced to a single 15-lap final for each class due to a thunderstorm late in the afternoon, reduced from the scheduled four-race Survival formal for the Opens and Triple Header for the Lites.

Moss, 23, was at his spectacular best in appauling conditions, hitting the lead on lap one and never headed throughout the final. Signed to head to the U.S. for JDR Motorsports KTM in 2012, he credited the performance as one of his greatest ever.

“It was nice in the afternoon racing in the sunshine, but then when it rained it was a great decision of WEM to run just one race considering the conditions,” said Moss, who also won his heat race. “After winning in the mud last week I had a lot of confidence, so I knew I could win again.

“I got a good start in the main event and felt awesome out there – I’ve actually never felt that good on a bike before. Everything just seemed to work and I was hitting my marks. It was my hometown, a great win in front of family and friends, so I’m stoked with that.”

Brenden Harrison, 22, made it two 250 SX-Fs on the podium in the Lites once again, the Queenslander taking third place for the second weekend in a row. Victorian Josh Cachia suffered a hand injury when he crashed out of the main event.

Former Australian champion Dan Reardon returned to the podium in the Pro Open class aboard the 450 SX-F, taking second after challenging for the win in challenging muddy conditions.

“It was looking promising to start the day with nice weather and the track seemed pretty good,” Reardon explained. “The heavens opened for the main event, but to get the overall result of second was good.

“I actually thought I was fourth when I crossed the finish, so to get back on the podium is good for me. It’s just a case of taking baby steps, but it’s a short series and I have to make every round count.”

Round one winner Tye Simmonds remains in title contention after finishing sixth in Wollongong, now just one point off the series lead in second overall. Hometown favourite Ryan Marmont was 11th after experiencing difficult luck during the evening.

The Super X, Australasian Supercross Championship, continues next weekend at Campbelltown Stadium for round three of five in the 2011 series next Saturday night, 5 November.

Visit www.ktm.com.au on the web for further information on KTM Australia, as well as KTM’s full model line-up of off-road and road motorcycles available for 2012.

CDR Rockstar Yamaha’s Jay Marmont thrashed his way through the wet and sloppy conditions to take a hard earned third place in the Pro Open class at round two of the Monster Energy SuperX held at Wollongong.

Marmont, the home town hero, looked sharp in afternoon sessions taking the top spot in qualifying and then riding his YZ450F to a heat race victory and a direct transfer to the main event.

But as riders and teams prepared themselves for the 20 lap Eliminator final, the heavens opened with a thunderstorm, just like the previous week, again pounding the circuit and officials quickly changed the format to a 15 lap final.

Marmont was determined to make up for the disappointing result of last week and also shake off the tag as a dry weather rider as the rain stopped just prior to the start but the damage was well and truly done to the circuit.

The gates fell and Marmont instantly locked bars with the riders alongside him and fought for control of his bike entering the first turn in last place. He managed to sneak around the inside and come out in eighth place and begin the long task of working his way forward in the wet, rutty and rapidly deteriorating track.

By the time the checkered flag flew, Marmont had climbed to third place in a very tough main event and now jumps to fifth place in the championship with three rounds remaining.

“When the clouds rolled in and the rain bucketed down, I tried to stay as positive as possible and not ride the way I did last weekend. We made the call on the changes to the bike to suit the muddy conditions and then I just had to deal with the track,” Marmont explains.

“While it wasn’t perfect and I made plenty of mistakes, it was a much better effort than last week and a bit of a confidence booster for me in muddy conditions.”

“I try to win every race I enter so even though I didn’t get the win, I feel more satisfied with the way I raced and the result and it gave me a good boost up in the points for the championship,” He finishes.

Like Marmont, team mate Jake Moss started the night off strongly taking a top three in his heat and entered the main event with confidence.

But his luck would soon change as the field charged into the first turn of the final, with Moss in the lead he stalled the bike and was left picking up the pieces as the rest of the field raced away.

Nearly a lap down, he began his climb back up the field and managed to salvage 10th place on the night and maintain his 10th place in the championship.

“It was another tough night and not what I’m capable of. The first turn fall put me a long way behind the field so from then it was a matter of just putting my head down and trying to pass as many riders as I could before the finish.”

“The way I raced was better than last week but I’m never happy with 10th in any race,” Moss said with frustration.

Team manager Craig Dack felt it was a better performance from his team and hopes for a strong finish to the 2011 season.

“The rain and mud as made racing tough in the first two rounds of SuperX but you have to expect all conditions and be prepared for them. Both the guys put in a good effort and the team again worked hard to deal with the rain.”

“It would be nice to get a dry event to create a better spectacle for the fans at and also take some pressure of the mechanics to prepare for each round but unfortunately, you can’t control the weather.”

“Our focus now shifts to next weekend where we need to keep climbing up the championship table and put our best foot forward in the remaining three rounds.”

The Super X tour now moves to Campbelltown in the western suburbs of Sydney this coming weekend where round three of the championship hit town. 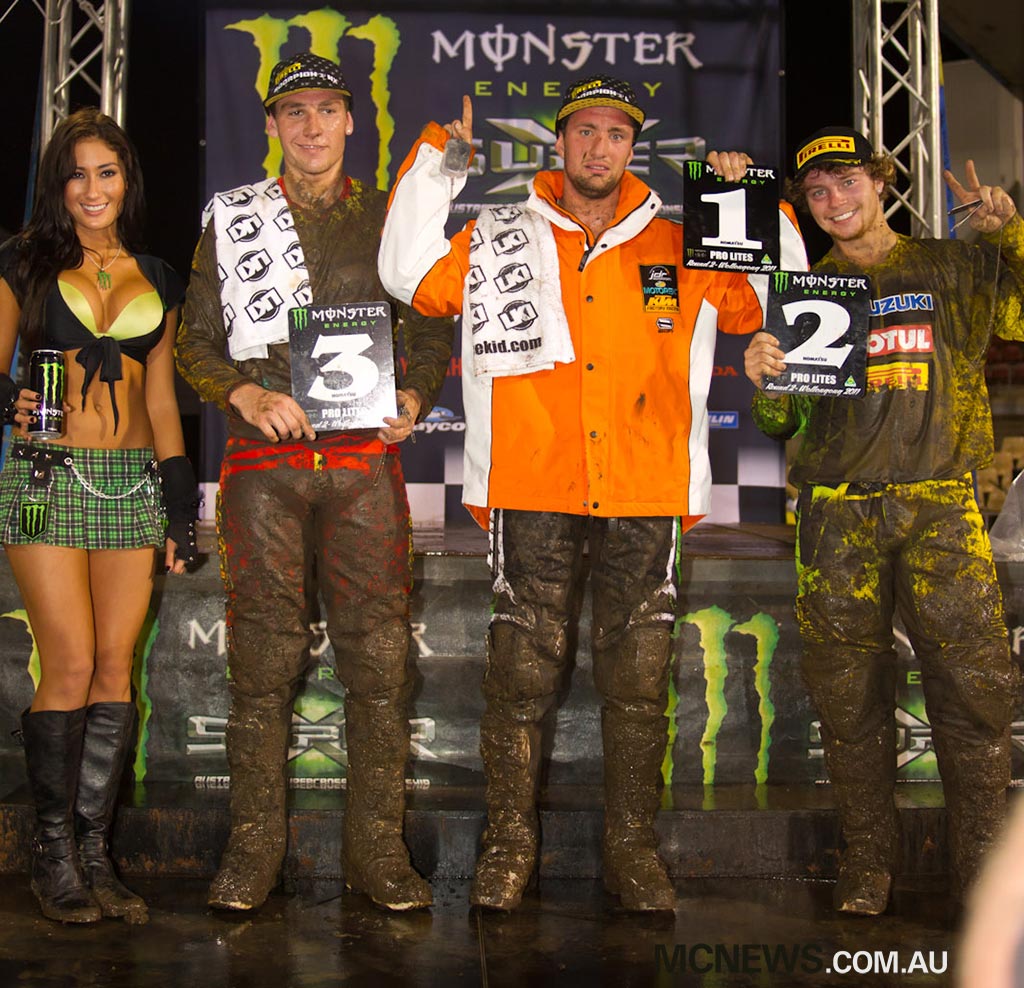 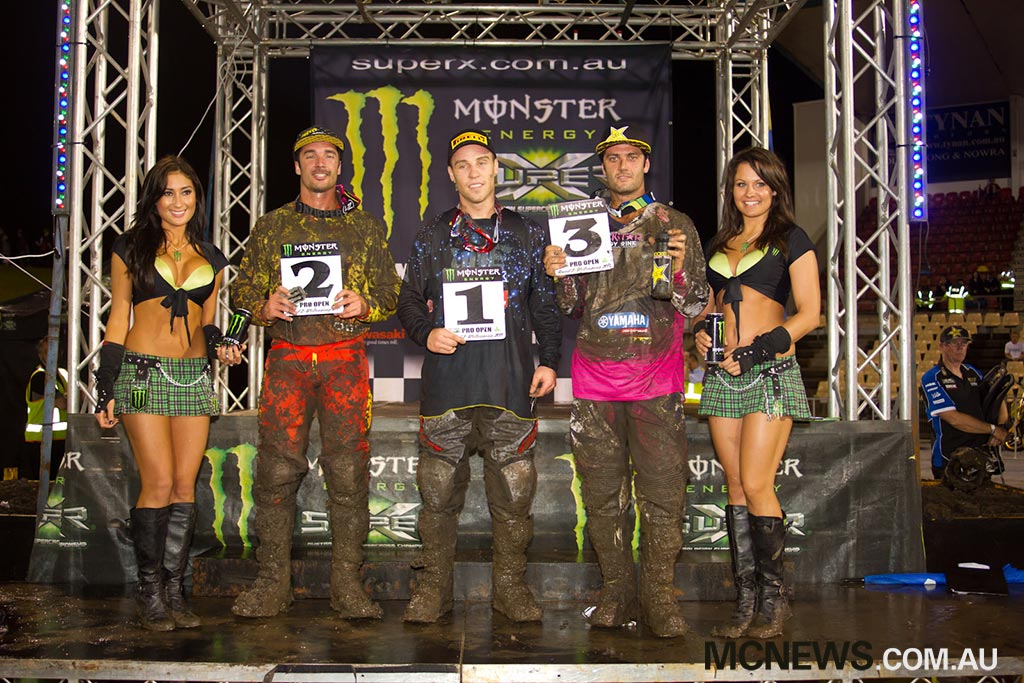