Mike Jones on his hopes for season 2019

Mike Jones, 2015 Australian Superbike Champion, has been a familiar face at previous pre-season tests in the past few years before venturing overseas.

This year he was again in attendance at the recent ASBK Test session at Phillip Island, onboard a Kawasaki ZX-10R on loan from Matt Harding.

Jones has committed to doing the opening round of the ASBK at Phillip Island but, unlike the last three years, has no immediate plans beyond that in regards to where he will be racing for season 2019.

We caught up with him over the weekend for a brief chat.

MCNews: First up what were you doing here?

Mike Jones: I’m having a ride around, I’m doing the ASBK test here in preparation for Round 1 of the ASBK. That’s the plan at the moment.

MCNews: So what happens after Round 1 in two weeks time?

Mike Jones: Not too sure, haven’t got anything solid yet, I’m still looking at options overseas as I don’t currently have anything right now. So that’s the position I’m in.

MCNews: You’ve been pretty up and down since you won the championship in 2015.

Mike Jones: I won the Australian Championship 2015 then raced for Desmosport Ducati 2016, and that was a tough year. The Ducati was new to the whole team so we had, I spose you’d say, teething problems. That made things quite tough, but we showed some potential there on the Ducati and Troy helped me get a ride with the Aruba.it Ducati team in the European Superstock 1000 Championship in 2017, I had a reasonable year there. For a year racing in Europe, I was fifth overall in the Championship, which was a pretty solid overall effort.

“Then with the Superstock 1000 championship being discontinued it meant I was looking for a ride elsewhere, so then I changed completely to a different manufacturer, different tyre, different team, different tracks, so everything was brand new again, and I still finished fourth overall in the Spanish Championship. So while it may seem up and down, it’s still been progressing upwards in my opinion, and I feel like I’ve been showing some strong results over there, on the podium in Europe and Spain, that for me has been pretty good. 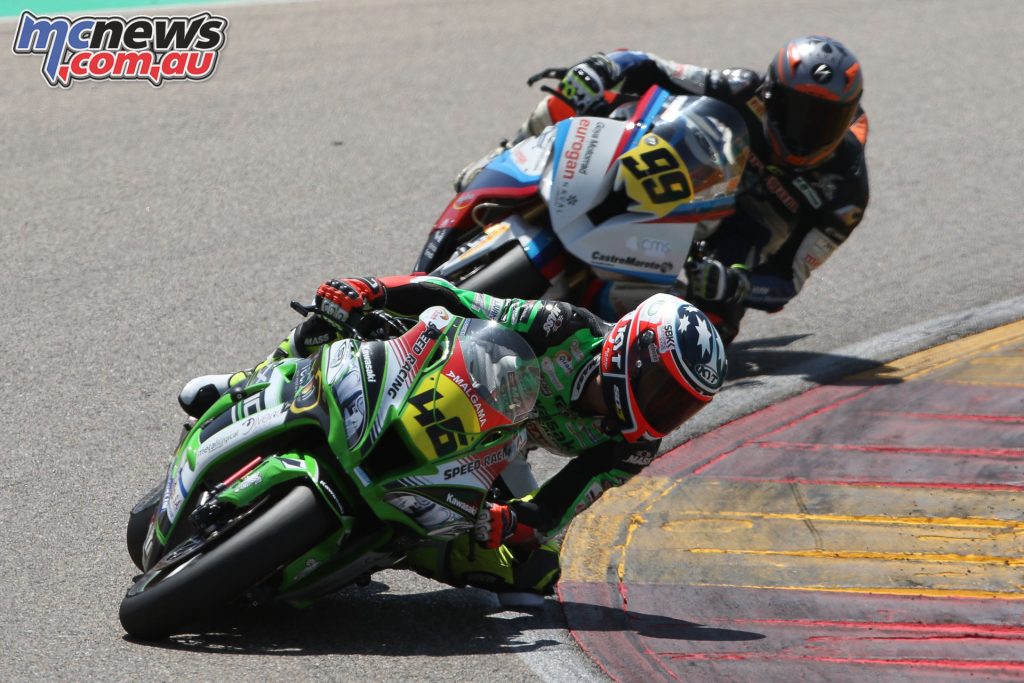 “Right at the moment I’ve come to a point where, it seems like a lot of the teams are really struggling for budget and asking the riders for budget, so trying to get the budget together is the most difficult thing right now. Especially because I’ve been in the position where I haven’t really had to bring budget to a team, so I’m not really prepared for that.”

MCNews: So the first question they ask is how much money have you got?

Mike Jones: “And my answer is I have nothing, as I’ve been paid enough to live, but not enough to go racing with your team.”

MCNews: Is it looking more and more that you’re going to be doing ASBK?

Mike Jones: “Yeah, it seems that way right at the moment. Racing in the Australian Superbike Championship, but I’m still looking and trying to race overseas.”

MCNews: Where’s the strongest option at the moment?

Mike Jones: “Probably Asia at the moment, I’m looking in Asia and it might be possible, there’s possibly something there.

McNews: And what about the two days here?

Mike Jones: “I had a good weekend, we’re riding KNR Hydraulics Kawasaki, one of Matt Harding’s bikes, so it’s a first time for me today on that bike, and we tried a bunch of different stuff for geomoetry and suspension, a few small electronic changes, but we made progress all day. I started to get comfortable on the bike, so it’s been a really good first day and I feel like if we continue on this path, with the progress we’re making, there shouldn’t be any reason I can’t be competitive at the first round here.”

MCNews: All the best in whatever you do mate, it would be good to see you mixing it up down here.