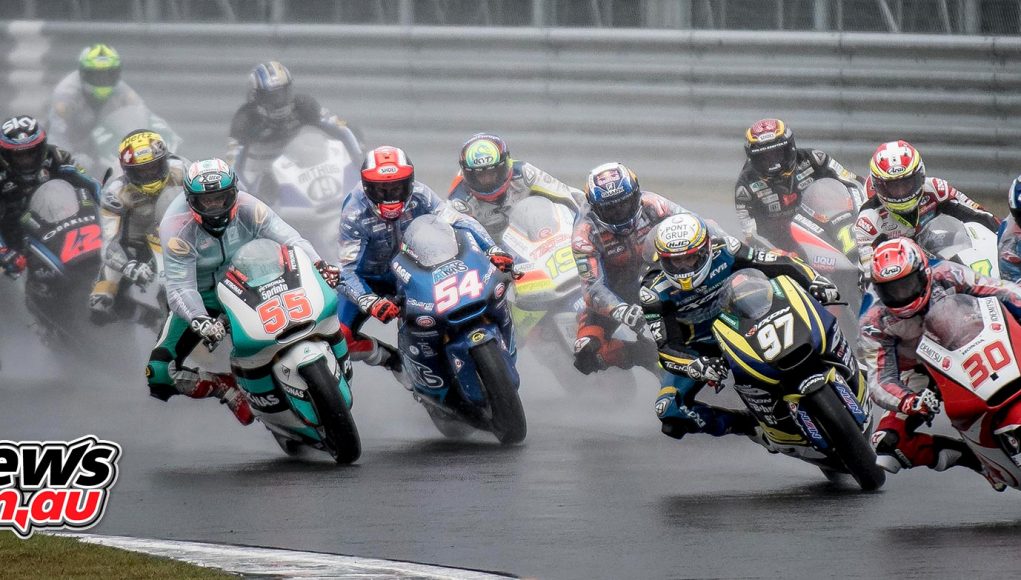 Alex Marquez (EG 0,0 Marc VDS) put in a wet weather masterclass at the Twin Ring Motegi, taking his third Moto2™ win at the track where he took his first World Championship victory back in 2013. Pulling away over the latter laps, Marquez was followed home by Xavi Vierge (Tech 3 Racing), who took his first podium, and Hafizh Syahrin (Petronas Raceline Malaysia) as the Malaysian took his second podium in three races.

Polesitter and home hero Takaaki Nakagami (Idemitsu Honda Team Asia) got the best start from pole, and the Japanese rider was holding firm at the front as the pack shuffled slightly behind him – with Marquez for close company as the two were gradually able to pull away. Marquez chose his moment to pounce to perfection, then pulling the pin once past Nakagami and beginning to disappear. He crossed the line a second and a half clear as the Japanese rider slipped backwards, with Vierge the leader of the chasing pack and able to hold off the incredible charge of Hafizh Syahrin.

With so much at stake for Morbidelli and key rival Tom Lüthi in the difficult conditions, the Championship remains largely unchanged as the Italian took P8 and the Swiss rider P11. Lüthi, initially off to a lightning start, then encountered visibility problems and a run off, regrouping to take some points and limit the damage.

Compatriot Dominique Aegerter (Kiefer Racing) dueled Morbidelli on the final lap but couldn’t quite get through, taking ninth, with Lorenzo Baldassarri (Forward Racing Team) completing the top ten – moving up an astounding twenty places from P30 on the grid.

After the race there was a further shake up in the standings, however – with news coming through that Aegerter had been disqualified from his race result at Misano. That moves Tom Lüthi to within 19 points of Morbidelli instead of 24, as Phillip Island awaits.

“I’m really happy for this victory and I knew I had this potential despite my crash on Saturday morning in practice. I managed the race very well, it is never easy to stay calm in these conditions and I waited for my moment to go to the front. At the end I could open a gap and control the victory. I want thank my team, the doctors and everyone who has helped me to come back after my injury.”

“I am so happy. It has been a very challenging weekend and the track conditions have been tough, but yesterday was a good day and today was even better! I finished the race in 2nd, which is amazing, and it is a dream come true. I have to say thanks to the Tech3 Racing Team for believing in me and working hard every day. Also, to my family who help to motivate and push me. Finally, of course, I have to thank my sponsors because without them none of this would be possible.“

“This was a very difficult race so I am happy to finish in eighth place after starting fifteenth. In these very wet conditions I have neither been very fast nor clever in the past so this is a good result for the championship. It was important to finish ahead of Tom Lüthi here and I did that. Nothing is certain in racing so we have to keep pushing for the remaining races of the season.”

“It was not a bad close to the weekend, yet, I can’t help but feel that we were not as strong as we usually are in the rain. It was the wettest that it has been throughout the three days, which may have affected things and I struggled a bit with the grip. However, I managed to salvage something as I had a good battle with Marcel Schrotter on the last lap and I came out on top at the finish line. It was a decent weekend overall, but now it’s time to go home to Australia and see all the fans which I am looking forward to. I must say congratulations to Xavi who rode really well today.”