Maverick Vinales leader tops the timesheets at the ‘Cathedral’

Maverick Viñales (Movistar Yamaha MotoGP) struck back after a tough Catalan GP to top Day 1 at TT Circuit Assen by over three-tenths after a leap forward in FP2. The weather threatened in the afternoon after a fully dry FP1, but track conditions remained good enough for the field to improve in the afternoon.

“Today‘s sessions were good. We wanted to compare the tyres and do many laps, especially on the soft to see if they are good to last the whole race. Whether they have good potential I don‘t know yet, we have to see tomorrow. We will see in FP4, when we‘re going to be more hot, which spec will be a good tyre for the race. I feel good, this is a track I like. The bike is working good and already from this morning we had a good set-up for this afternoon. We gained a lot of good information for tomorrow, especially for qualifying. We are trying and discussing the chassis, but as I always say: when we have grip, the bike is really nice to ride. Today it was easy to ride and control, and it was nice to feel good again.”

The rider from Roses was followed by Jonas Folger (Monster Yamaha tech 3) on the combined timesheets as the German rookie impressed once again, with reigning Champion Marc Marquez (Repsol Honda Team) shooting back up the order in FP2 to complete the top three overall on Friday.

“Today we can be really pleased with the job that we did especially after the tricky start. This morning, I fell after completing only a few corners because I hit the patch of oil from Dovizioso’s bike, which caused me to have a high side. This accident made me a bit nervous about losing my rhythm and my confidence. However, this was not the case when I went back out on the track and even if it took me a while to learn this circuit on the MotoGP bike, I understood the changes well and we made a good step forward. My riding and the direction that we took on the M1 enabled us to achieve a solid lap time, plus we were consistent. So overall, the team and I have finished the day in second, and we must be very happy about what we have accomplished.”

“With the wind, conditions were quite tricky today, but ultimately I’m happy enough with how it went. This morning we worked a bit more for the race pace, while in the afternoon, when a few drops started to fall, we almost immediately went for a time attack. In the end we did quite a good session, but our rivals are still a bit ahead of us. Anyway, I think we’re working in the right direction with the bike setup, and we just have to continue in this way, looking to improve the bike stability and rear grip above all. We have some margin and we’ll do our best to be faster.”

The day began with drama in FP1 as Andrea Dovizioso (Ducati Team) suffered a problem that subsequently brought out the Red Flag, with teammate Jorge Lorenzo (Ducati Team) and Folger both crashing out in the incident but both ok.

Mugello and Barcelona winner ‘DesmoDovi’ nevertheless kept his momentum and form in fine order to go fourth by the end of action, ahead of Cal Crutchlow (LCR Honda Team) completing the top five despite a run off in the afternoon.

“I’m pleased because we started well and I’m satisfied with the time I set, but we will have to work more to improve our set-up because we must be a bit more competitive in some sectors, especially T3 and T4. Today Viñales and Marquez were particularly quick and, if the track conditions are dry tomorrow, we will try and get closer to them.”

The most successful rider on the grid at the TT Circuit Assen, Valentino Rossi (Movistar Yamaha MotoGP), was sixth quickest on Day 1. Similar to his teammate, Rossi started the day at the Assen track with getting a feel for his bike with the updated frame. He ended the session with an eight-minute ’shoot-out‘ to secure a place in the top-10, in case it would rain in the afternoon and tomorrow. The nine-time World Champion gradually chipped away at his time in FP2 as he completed another 19 laps on top of the morning’s 22 laps in FP1, to make the nimble character of the Yamaha suit the twisty sections of the ’Cathedral‘. Working continuously on squeezing out extra tenths of a second, the Italian wrapped up the session setting a 1‘33.830s lap for sixth place in the FP2 and combined results, with a 0.700s margin to his teammate.

“This day was tough, as always in Assen, but in the end it was quite positive for me because I was in the top-5 this morning and in sixth position this afternoon. It was very important to stay in the top-10 for Q2 tomorrow, because it looks like the weather will be worse then. We were quite lucky, because we had two dry sessions, which in Assen isn‘t always the case. We were able to work on the chassis and my feeling with the bike is not so bad. For sure we still have some work to do. The balance of the bike is not at 100% yet, but for a Friday it was good.”

“It was quite a positive first day and I am ready for tomorrow, even if it rains. I began FP2 with used tyres, which was our plan but then, everyone was improving their times and that made me a bit stressed because it started to rain half way through the session. Fortunately, this wet weather didn’t last for long so when I put on a new soft tyre, at 15 minutes before the end, I made a good improvement. When the tyres had completed eight or nine laps, I was able to run some solid times, which were better than the others and I was also consistent. This was the positive point, and now we just need to find a bit more confidence on the bike. We are expecting rain tomorrow, but we will have to see how the grip is on the track when this happens. I have completed some wet laps on the Yamaha before so I know that I just need to adapt and be confident. In addition, I think that the rain tyres have a very good level of performance in the damp. The 8th place finish today is good in case there is bad weather tomorrow and it means that I will already be in Q2. However, if it is dry, some riders will push a lot to get into the top ten, but whatever happens, I will do my best but be careful.”

“Today we tried different tyres and not much else. We actually had a setup for this track that we planned to test, but with the weather so changeable and the forecast not good for tomorrow, the main goal became to try and be fast and secure a placing in the top 10. We were able to achieve that, improving a bit lap by lap, though not as much as we would have liked. Anyway, if it actually does rain tomorrow, we just have to focus on getting a good feeling in the wet and get ready for qualifying, no matter what conditions we’ll have in the afternoon.”

“At the end of the session today I was really trying to break into the top 10 to try and make the Q2 cut off. I might have made it but I got held up a bit on my last flying lap. The weather forecast predicts rain tomorrow and if that’s the case we’ve just missed out on the top 10, so we must see what the conditions are when we wake up. I need it to be dry but today was positive and the bike is working well. I’m happy with the consistency of my rhythm and I’ve got decent speed on a couple of the tyre options, so I’m confident of making the top 10 if we get a break with the weather for FP3 and it stays dry.”

“Today was a very complicated day for me. For the moment I don’t feel fully comfortable with the bike and the modifications we made in the afternoon to improve stability didn’t work the way we had hoped. In addition there are a couple of corners in the final sector that I’m not able to do the way I want and there we lose a lot of time. Now we have to find some solutions to improve our competitive level and hopefully it won’t rain tomorrow, otherwise we’ll only have the Sunday morning warm-up to try and improve in dry conditions.”

With weather more of a question mark for Saturday and qualifying, Friday could prove decisive in the grid for the Motul TT Assen. 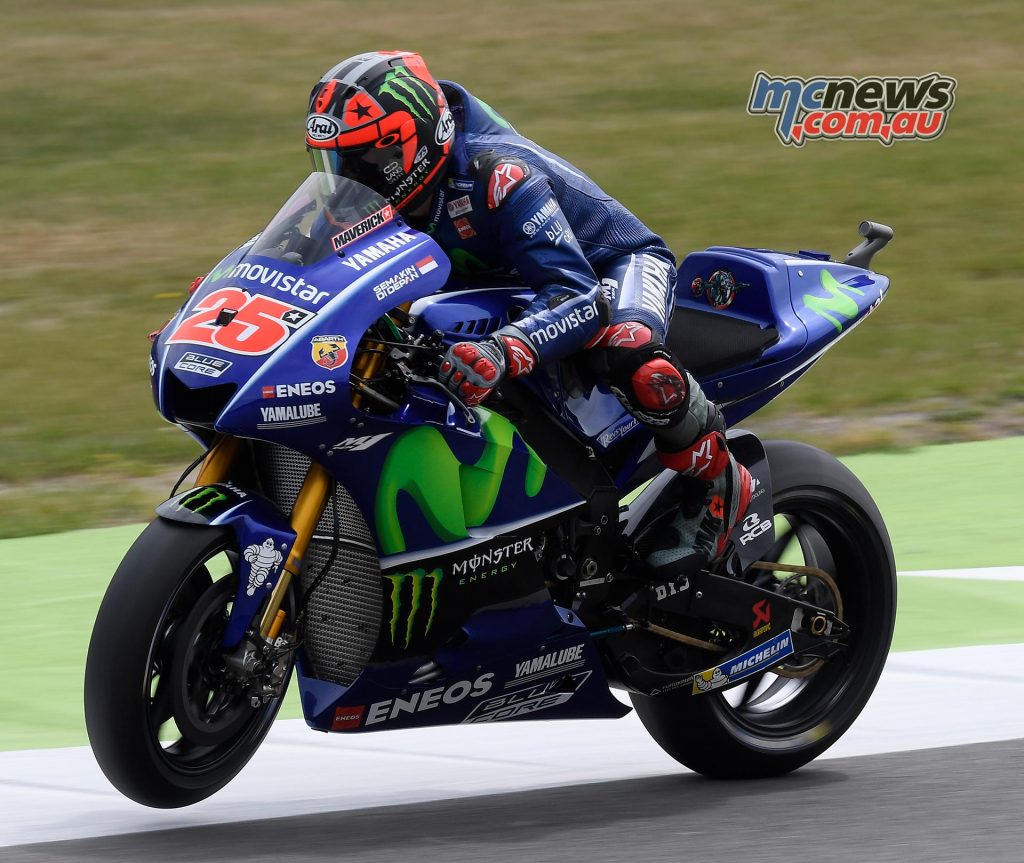 Moto2 – Franco Morbidelli in command at the ‘Cathedral’

Alex Marquez (EG 0,0 Marc VDS) was a high profile crasher on Day 1 but was unhurt, going down at the final chicane during a hot lap in FP1. The rider from Cervera and winner last time out nevertheless completed the top four on Day 1, edging out compatriot Axel Pons (RW Racing GP).

Miguel Oliveira (Red Bull KTM Ajo) had another good day on track in P6 for the new KTM chassis, ahead of fastest Suter Dominique Aegerter (Kiefer Racing) in seventh. Xavi Vierge (Tech 3 Racing) got his form back after recent injury in eighth, only 0.010 off the GP winner ahead of him.

“Overall, the start of this weekend has been quite positive for us and we just need to work on the setting a bit more and spend some more time on the track, but we are not too far off already. I had a pretty big scare in FP2 where I was behind Bagnaia and he closed the throttle at turn 12, which is a really fast kink. I had to the do the same and we nearly touched, but then the front of my bike tucked over the curves. Somehow I managed to save it, which was lucky, yet, unfortunately, I lost that lap which was very quick up until that moment. Anyway, qualifying is tomorrow so we will do our best as always.”

He’s made a habit of taking pole positions in 2017, and Jorge Martin (Del Conca Gresini Moto3) was the fastest man in Moto3 once again after the first two practice sessions at Assen. Aron Canet (Estrella Galicia 0,0) was second quickest overall on Friday, ahead of Championship leader Joan Mir (Leopard Racing).

Conditions were much cooler than the Catalan GP and some very light rain also began to fall towards the end of FP2, although nothing to significantly affect track conditions.

Philipp Oettl (Südmetall Schedl GP Racing) was ninth on the opening day with his time set during FP1, ahead of a solid Friday performance from Jules Danilo (Marinelli Rivacold Snipers) to lock out the top ten.

Aprilia up the ante in nakedbike war with Tuono V4 X