Valentino Rossi (Movistar Yamaha MotoGP) penned another stunning chapter in what is now the longest winning career in the history of Grand Prix motorcycle racing at the ‘Cathedral’ of speed, as the number 46 took his 115th win in the Motul TT Assen, more than 20 years after his first. 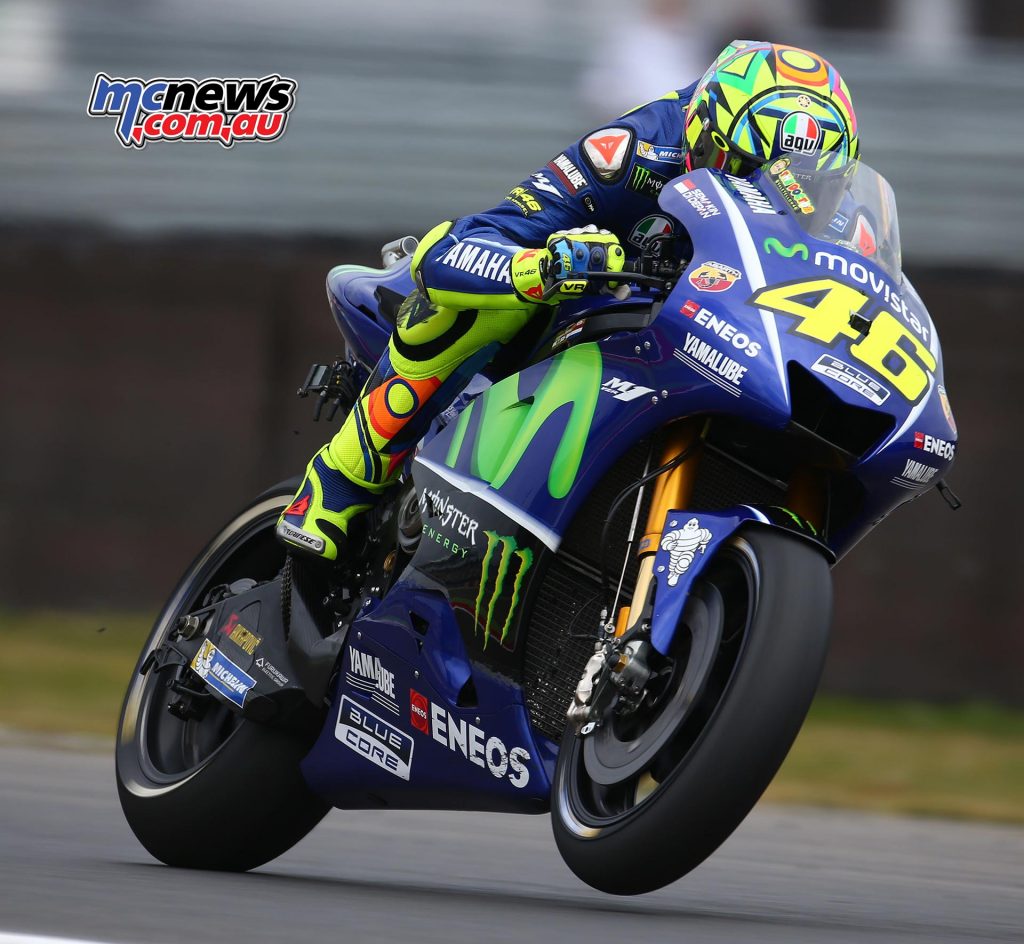 Six-hundredths of a second was the distance between victory and podium, as Rossi just headed compatriot Danilo Petrucci (Octo Pramac Racing) over the line. 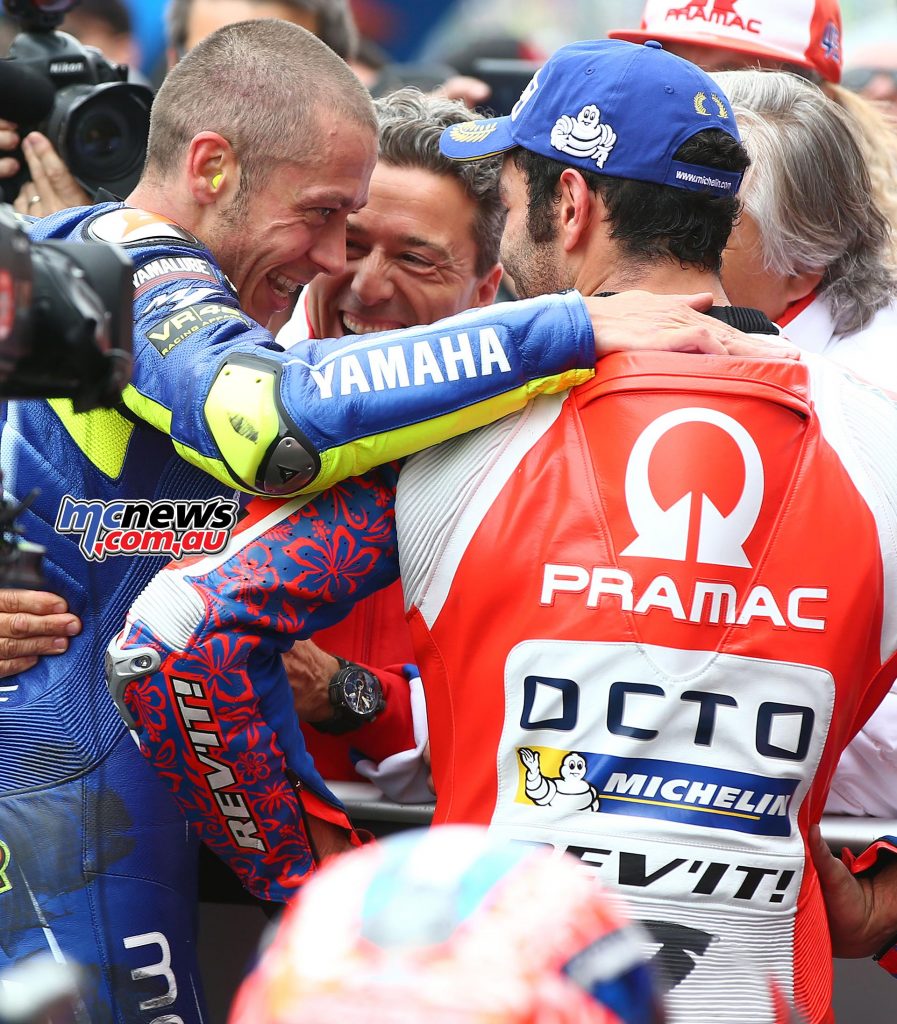 Reigning Champion Marc Marquez (Repsol Honda Team) won a three-way fight for third to complete the rostrum in another close contest, beating Cal Crutchlow (LCR Honda) by 0.042 at the flag.

At lights out, it was Johann Zarco (Monster Yamaha Tech 3) who took the holeshot from his first ever pole position despite a better start from Marquez, and the Frenchman led the field away as Rossi took Petrucci for third. 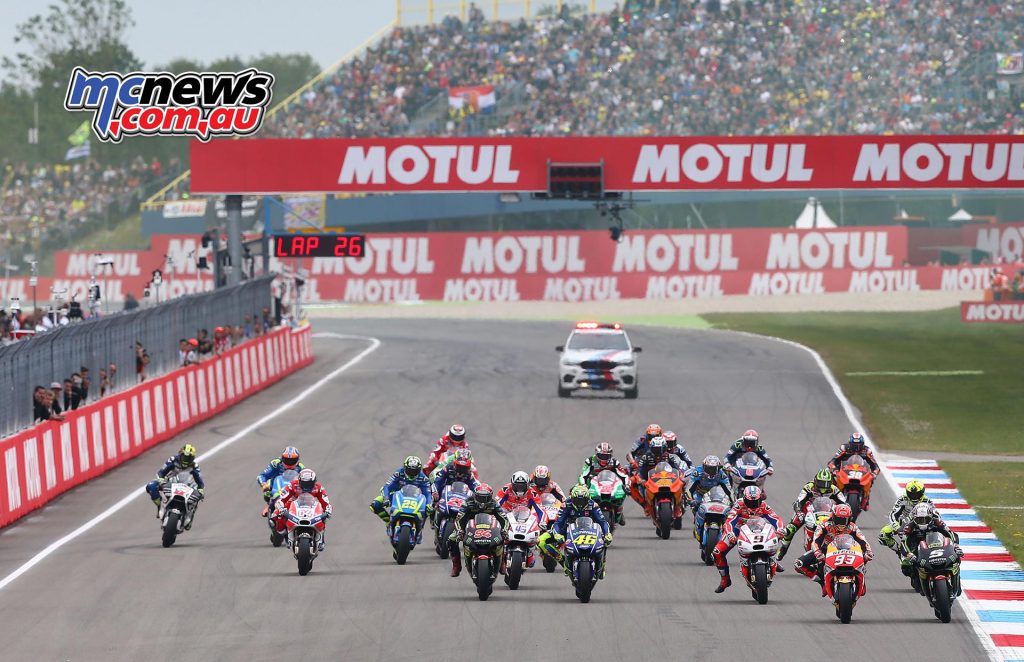 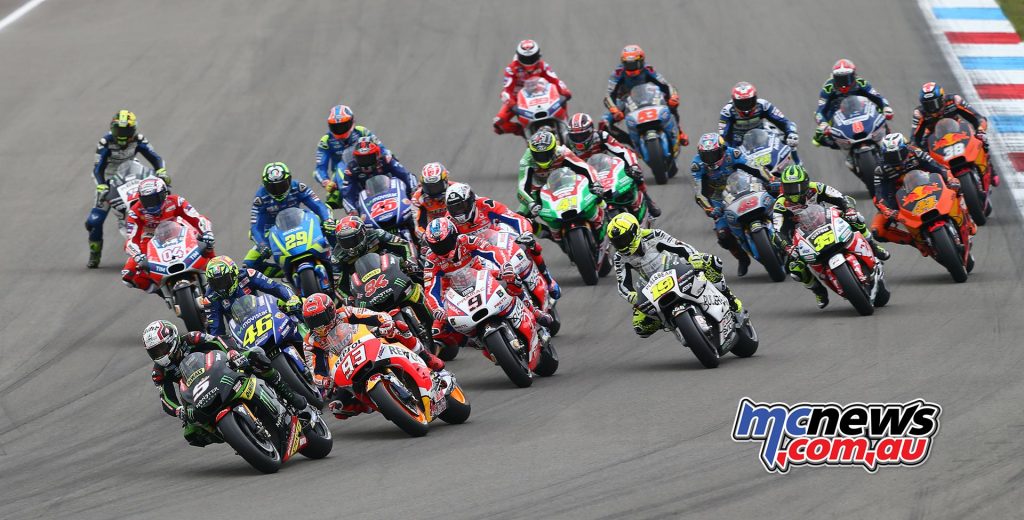 As the front four settled into a game of high-octane chess and pulled a gap, Redding was pushing hard in fifth to escape from those on the chase – but ‘DesmoDovi’ and Viñales were soon on the scene, with the Spaniard taking over in fifth to hunt down the leaders as Rossi then struck against Marquez at the front. 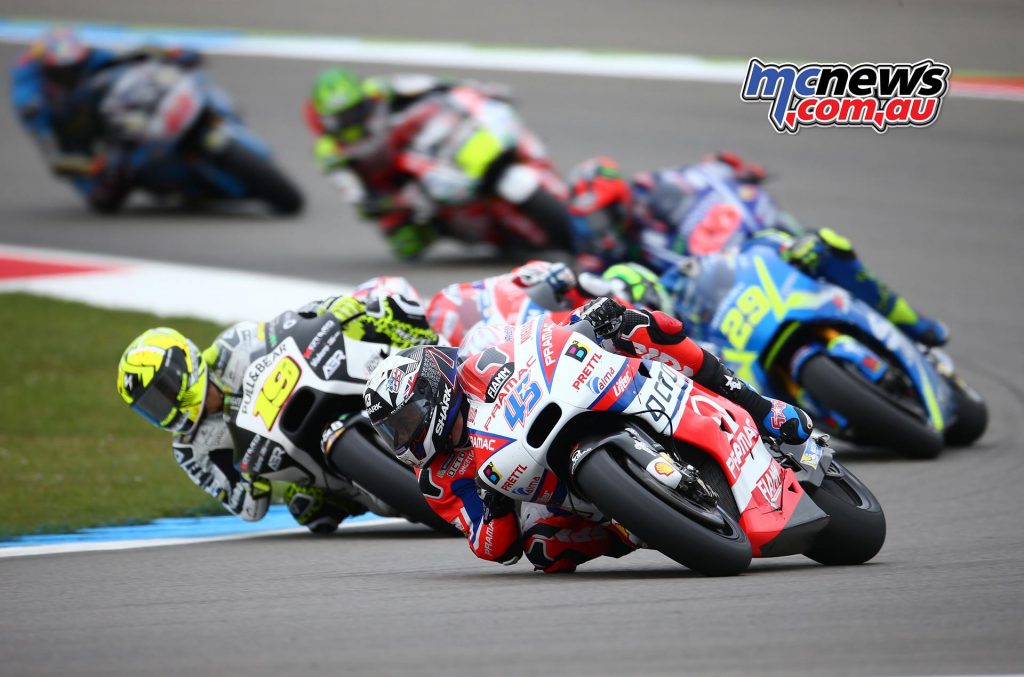 And then Viñales crashed.

Pushing to close down a three second gap back up to the top four, the Movistar Yamaha MotoGP rider lost control at the final chicane and slid off just ahead of key rival Dovizioso – suffering his second DNF of the year. As the rider from Roses made it back down pitlane, Petrucci took second from Marquez and the ‘Doctor’ began to pull away in the lead – over a second ahead with nine to go. 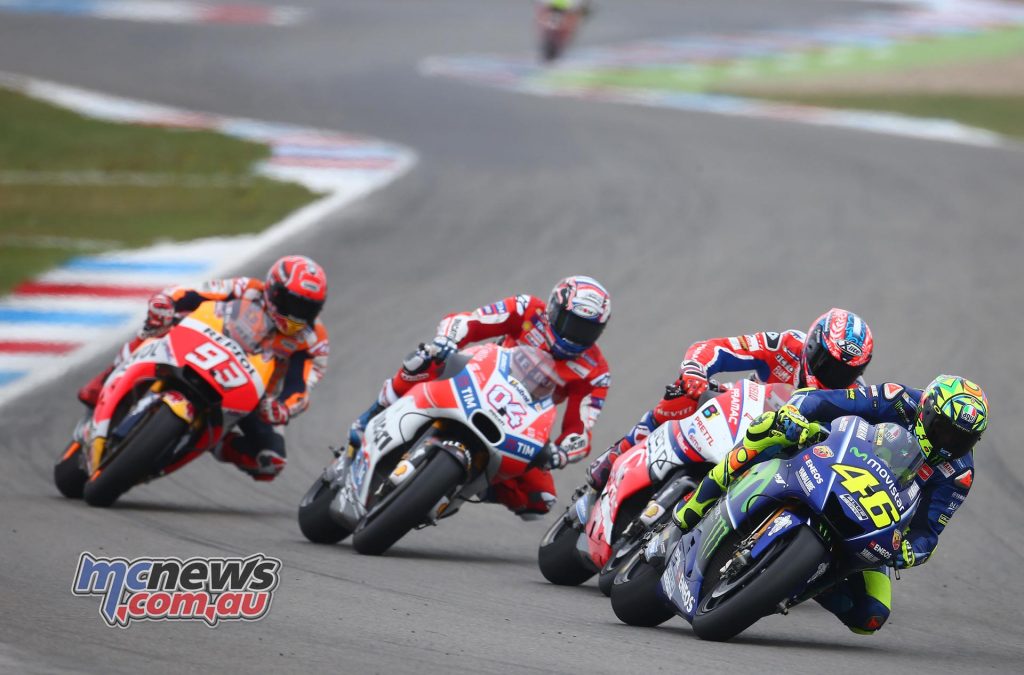 And then? It started to rain – and the story was evidently far from over.

As the flag flew to signal bike changes were allowed, first in was Zarco, with the Frenchman taking the gamble just ahead of Hector Barbera (Reale Avintia Racing) as the conditions remained in the balance and the majority stayed out. 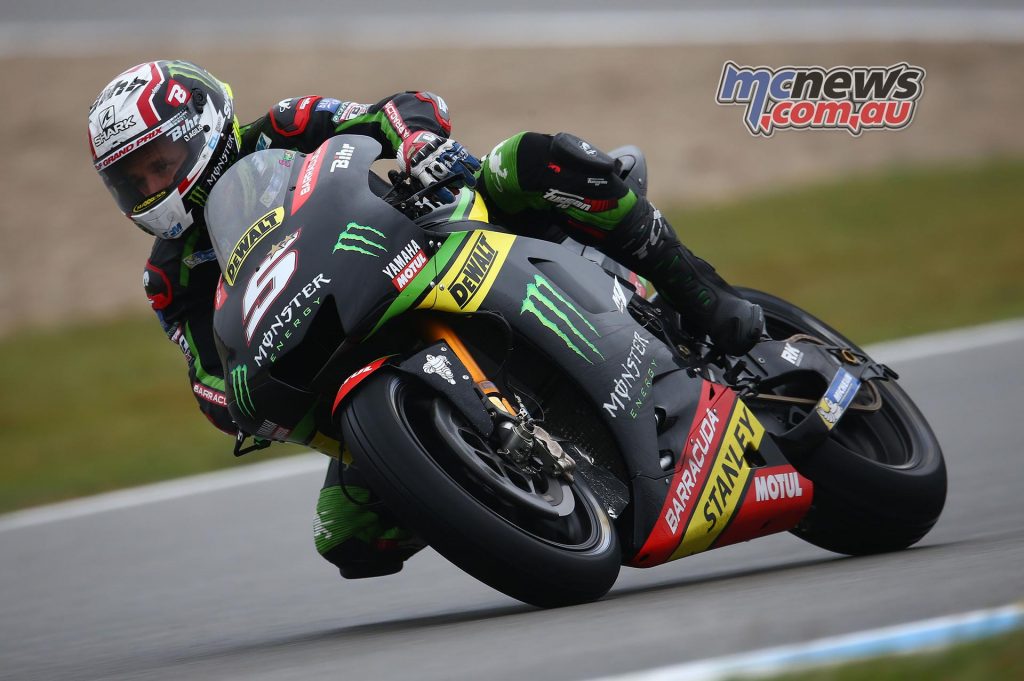 It was initially a four-way battle for the win as ‘DesmoDovi’ exploded onto the scene at the front, with Rossi back in the clutches of his compatriots and Marquez – but the rain began to fall again. As the last lap dawned, it was Petrucci dueling Rossi at the front, as Marquez and Dovizioso suddenly found themselves hunted down by Crutchlow and the stage was set: a duel for the win, and a three-way fight for third. 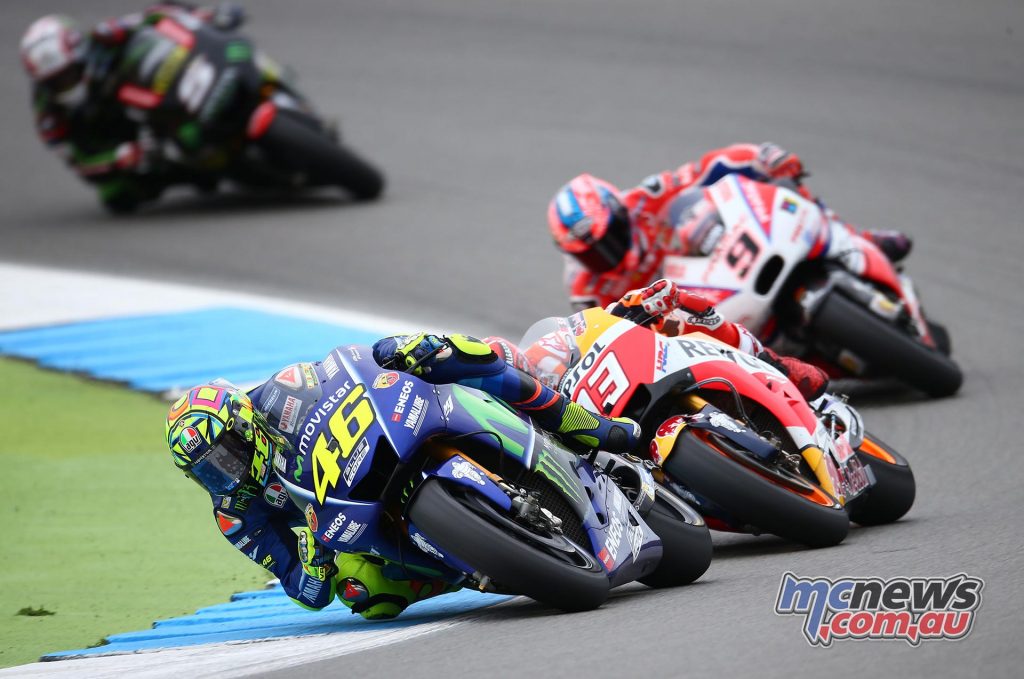 Past backmarkers, through the rain and incredibly tight together over the line, it was the ‘Doctor’ first at the flag – with Petrucci forced to settle for second as the number 46 took his first race win in over a year and the 115th of his career, extending his winning career at world level to the longest in history.

Behind Petrucci, the battle raged and Marquez beat Crutchlow over the line by only 0.042 to complete the podium, with ‘DesmoDovi’ fifth at the flag – and now heading to Germany with the Championship lead. 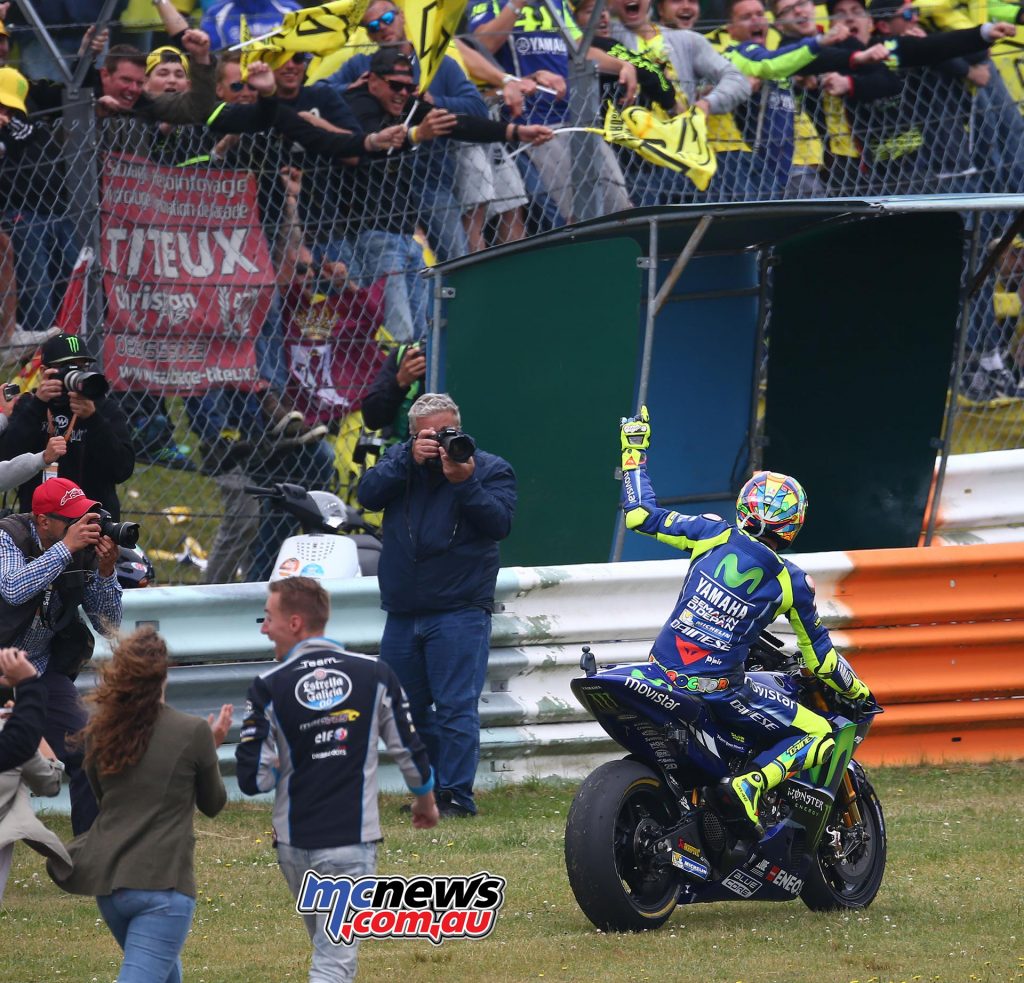 Jack Miller navigated a difficult race to take another impressive result at the TT Circuit Assen where he won last year, crossing the line in sixth after staying at the sharp end throughout. Karel Abraham (Pull&Bear Aspar Team) shone in the circumstances to move through in the latter stages, dueling Loris Baz (Reale Avintia Racing) over the line as the two took P7 and P8 respectively. Andrea Iannone (Team Suzuki Ecstar) took some solid points in ninth, just a tenth off the two Ducatis ahead of him. 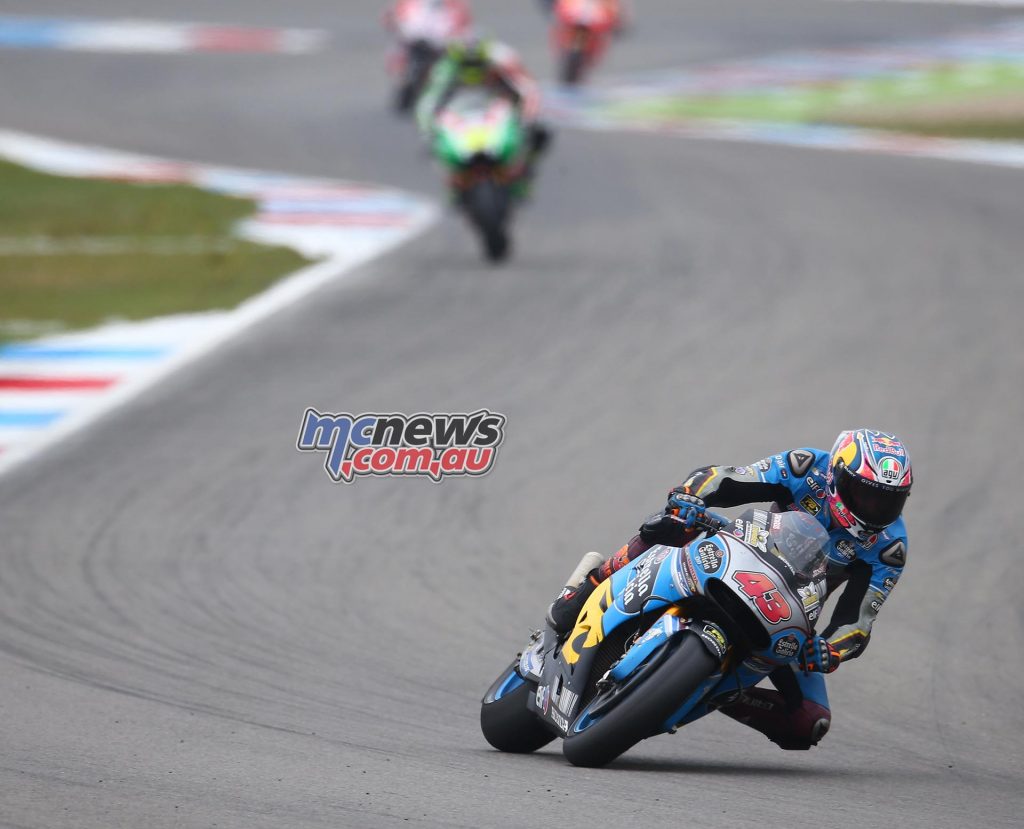 Aleix Espargaro (Aprilia Racing Team Gresini) completed the top ten for some good points after a difficult race last time out, ahead of a stunning result for his brother Pol Espargaro as the younger of the two took the best yet result for Red Bull KTM Factory racing in P11. The KTM rider beat Tito Rabat (EG 0,0 Marc VDS) by less than a second as the 2014 Moto2 World Champion took another points finish in P12, ahead of a difficult day for Dani Pedrosa (Repsol Honda Team). 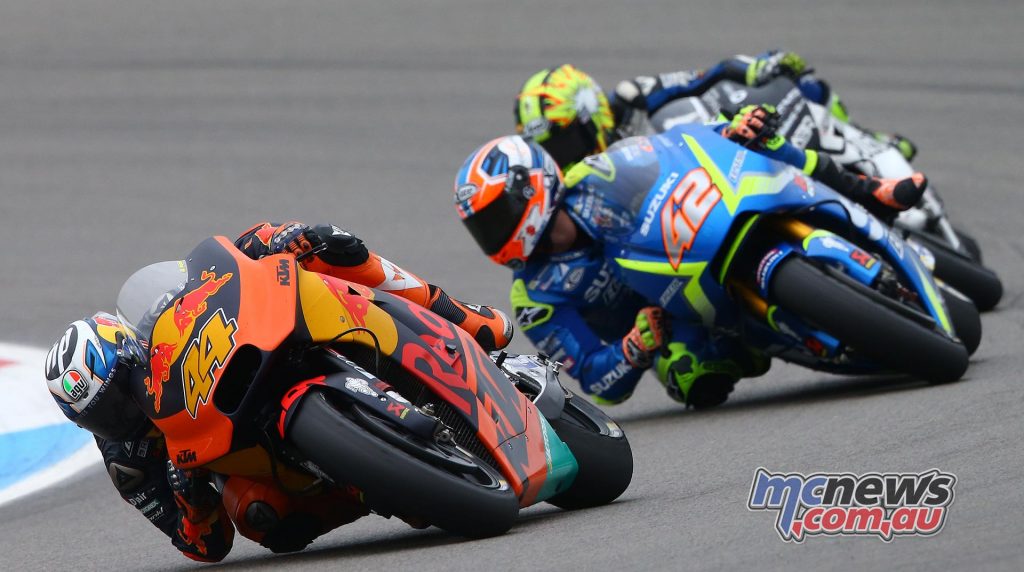 Zarco’s tyre gamble didn’t pay off, with the Frenchman then also handed a ride through for speeding in the pitlane and eventually classified in P14, leading the group the riders who went in to change bikes – Jorge Lorenzo (Ducati Team) was next, completing the points, ahead of Hector Barbera (Reale Avintia Racing) and Alex Rins (Team Suzuki Ecstar). 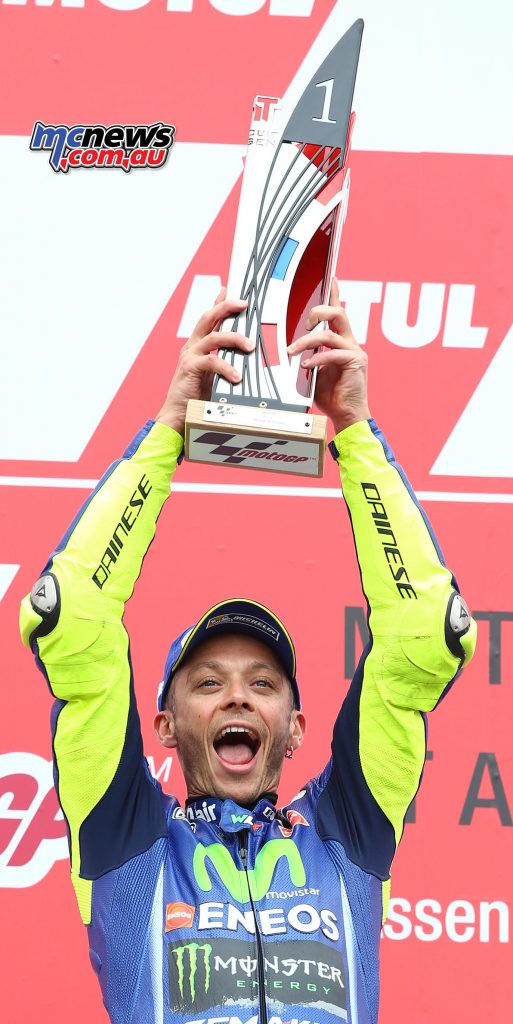 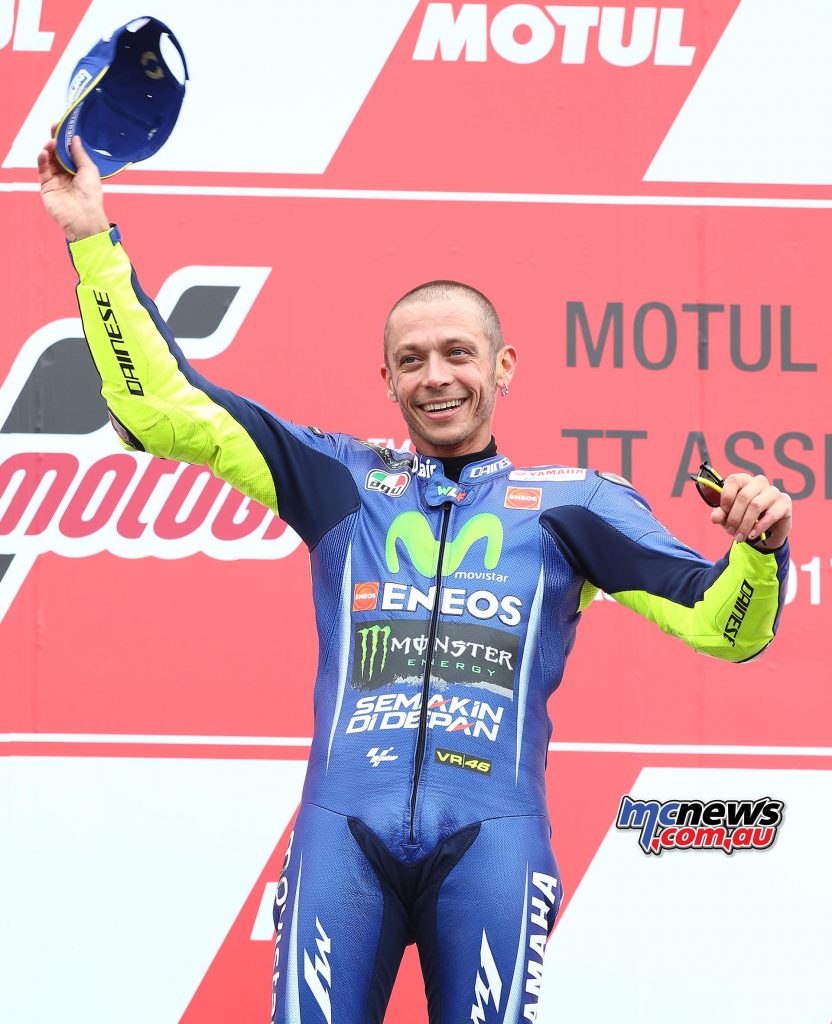 After another chapter of history was written at Assen, ahead awaits the Sachsenring for the last race before the summer break. And with a new name at the top of the standings: Andrea Dovizioso. 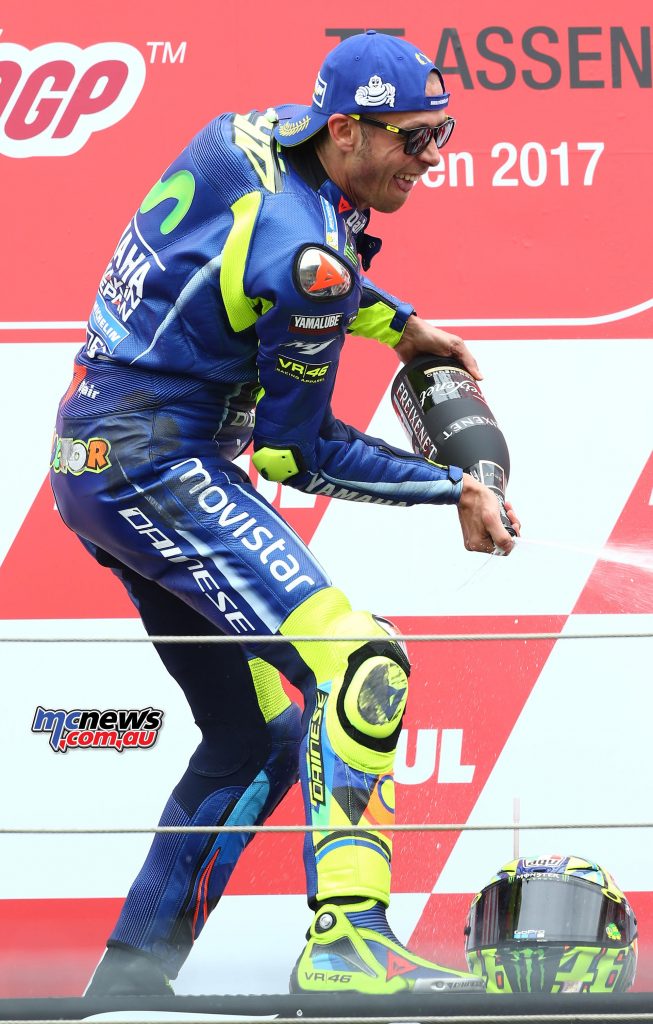 Valentino Rossi’s first win came at Brno on August 18th, 1996, and this victory, more than 12 months since his last, perhaps tasted even sweeter to the 38-year-old motorcycle racing legend. 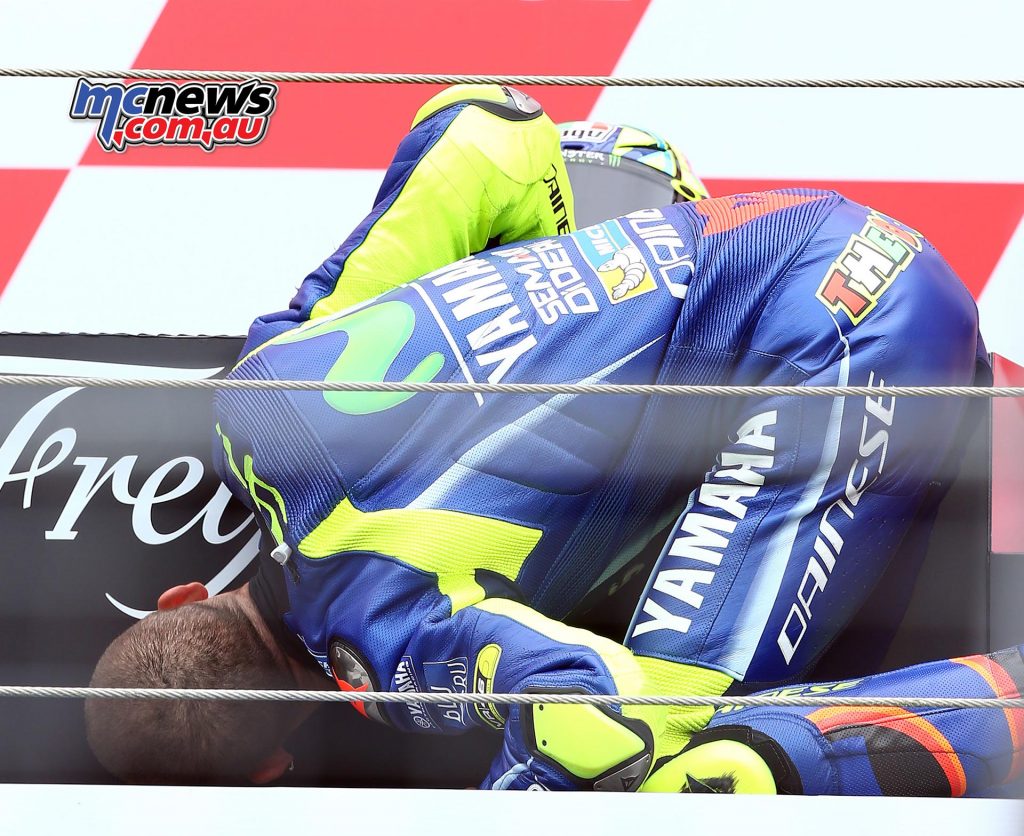 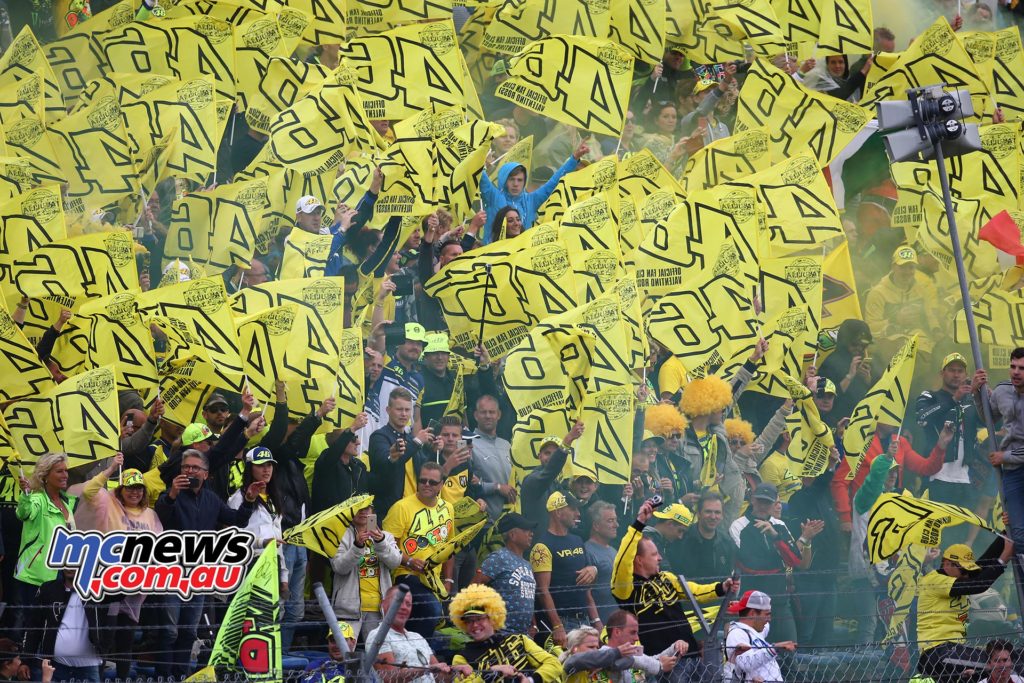 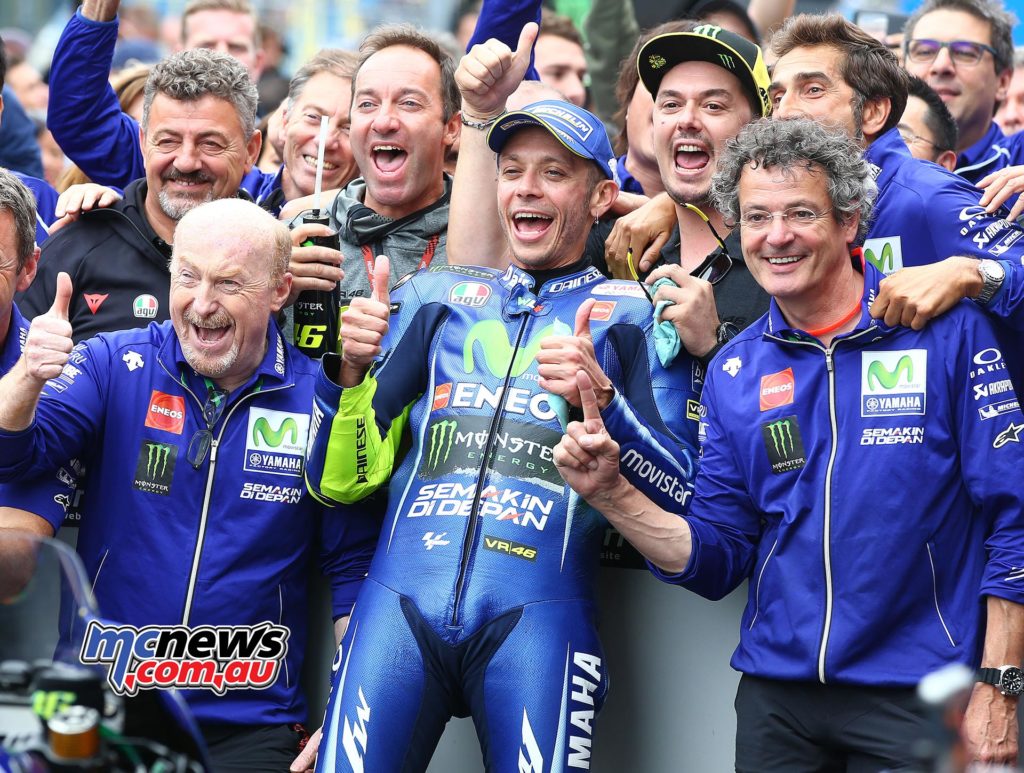