Boris Mihailovic on the Misano MotoGP

How weird was it watching a race without Rossi in it? I’m not sure what the actual statistic is, but he’s like maybe missed three or four races in his entire and lengthy career. Suddenly not having him on the grid, especially at Misano, was a bit like sipping flat beer – it’s still had the bang, but not the fizz. 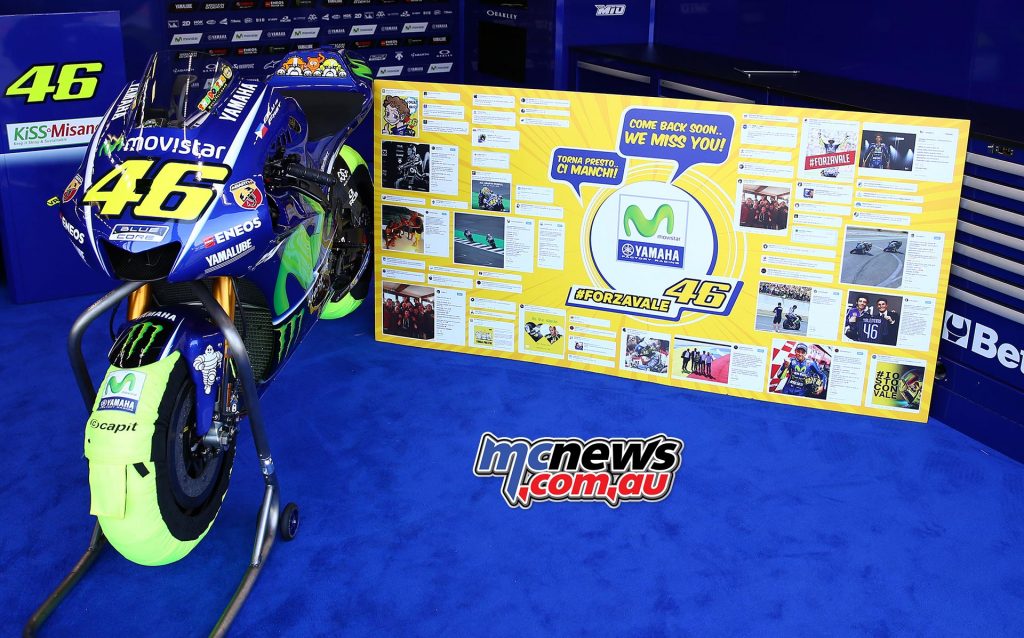 And it was raining, so if the Doctor had been on hand rather than oozing into his surgical leg-sock…well, we all know how easy but ultimately pointless it is to play the ‘if’ game during MotoGP.

They all got to qualify in the dry, but the race was declared wet. The support races had been crashfests, with almost half the field ploughing the gravel in both Moto3 and Moto2. 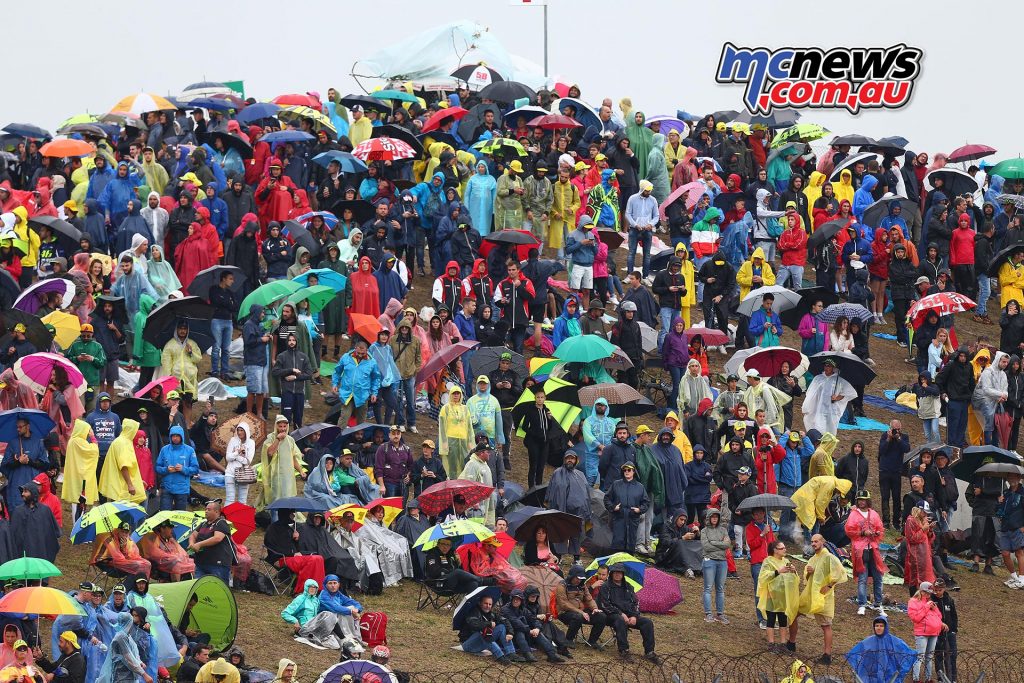 So part of me wondered how exciting it would be for the championship if (there’s that damned word again) Marquez, Dovzioso and Vinales also tasted the gravel in this race. It was certainly a most possible scenario given the conditions.

What was not a very possible scenario was seeing Jorge Lorenzo spear into the lead from the start. He’d qualified fifth. Pole position was Vinales’s. Then came Dovi, Marquez and Crutchlow, with Zarco sitting just astern of Lorenzo. 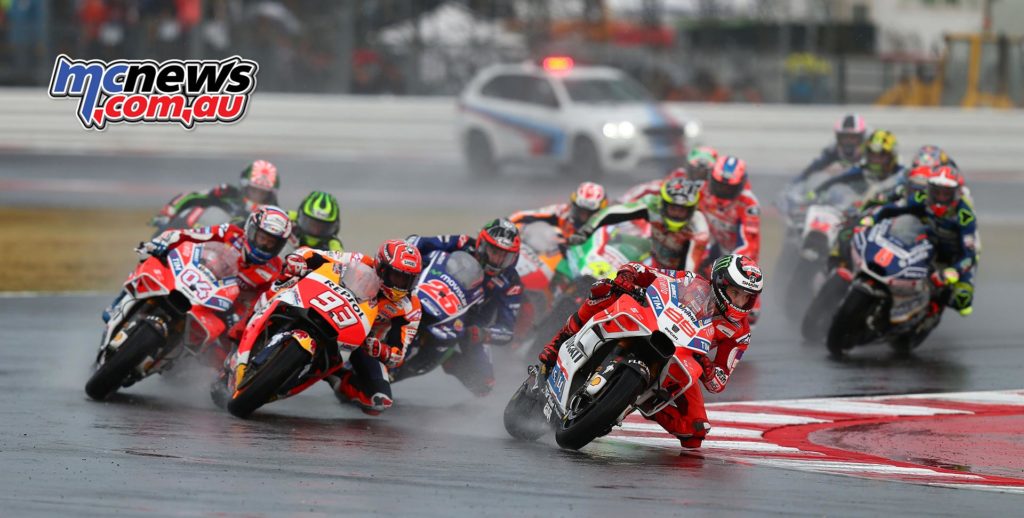 Conventional wisdom would dictate Lorenzo rapidly riding backwards in the rain before maybe surrendering and retiring for a massage in his motorhome.

Instead, we saw him belt into the lead and very quickly eke himself out a bit of a lead. In fact, by lap six, Lorenzo was four-and-a-half seconds ahead of Petrucci, who had charged his way through from eighth on the grid to an ominous third.

At the other end of the scale, Dani Pedrosa, who started in seventh barely half-a-second off Vinales’s pole position, went backwards so fast in the rain it was almost comical.

He ended up finishing second last, more than one-and-a-half minutes adrift of the leader and behind Cal Crutchlow who had crashed and remounted. More alarmingly, he was only 22 seconds in front of Zarco, who pushed his bike several hundred metres across the finish line to secure one precious championship point. It was a truly heroic effort by the Frenchman who looked like he was going to have a heart attack directly underneath the chequered flag.

But Lap Seven was the cruncher for Jorge, who high-sided himself out of the race after posting lap times a second faster than everyone else except the rain-loving Petrucci. 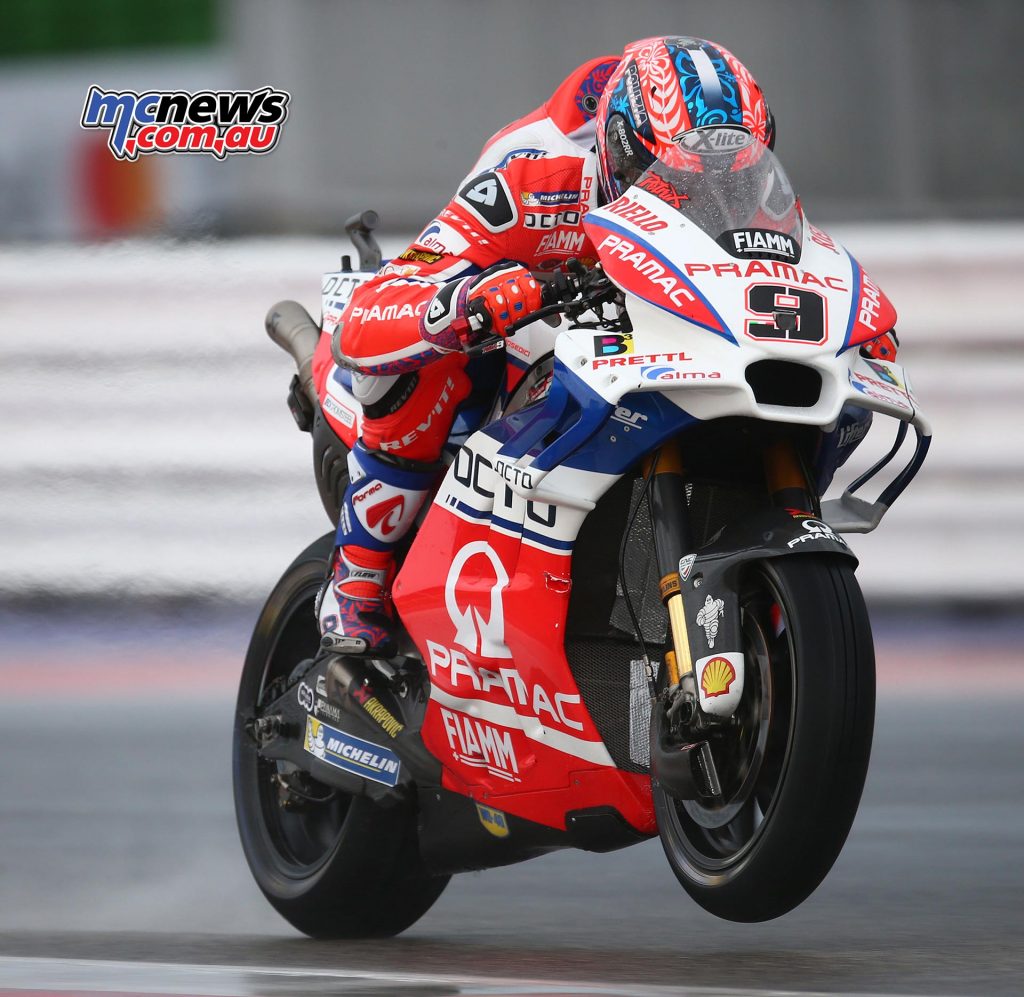 That left the big Italian to lead the race as Marquez followed, and Dovizioso, back in third, made championship calculations in his head before deciding third was good enough about halfway through the race. 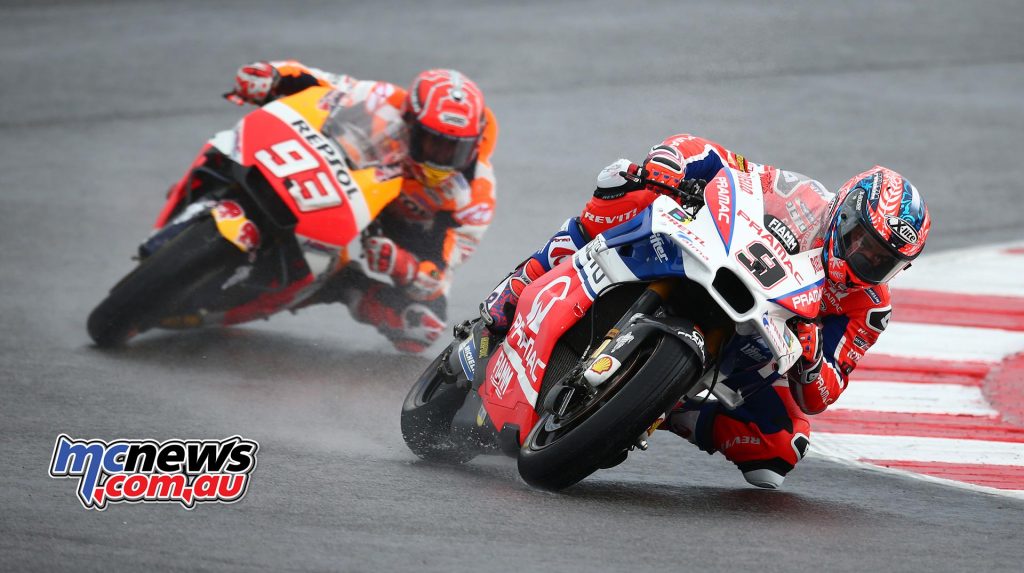 Marquez though was another matter. Petrucci led from lap seven all the way until the last lap. Marquez sat on his rear tyre with a maturity belying his age and just waited and waited. He knew Dovi was going to settle for third and he knew Vinales was not going fast enough to close his 12-second gap to the front. 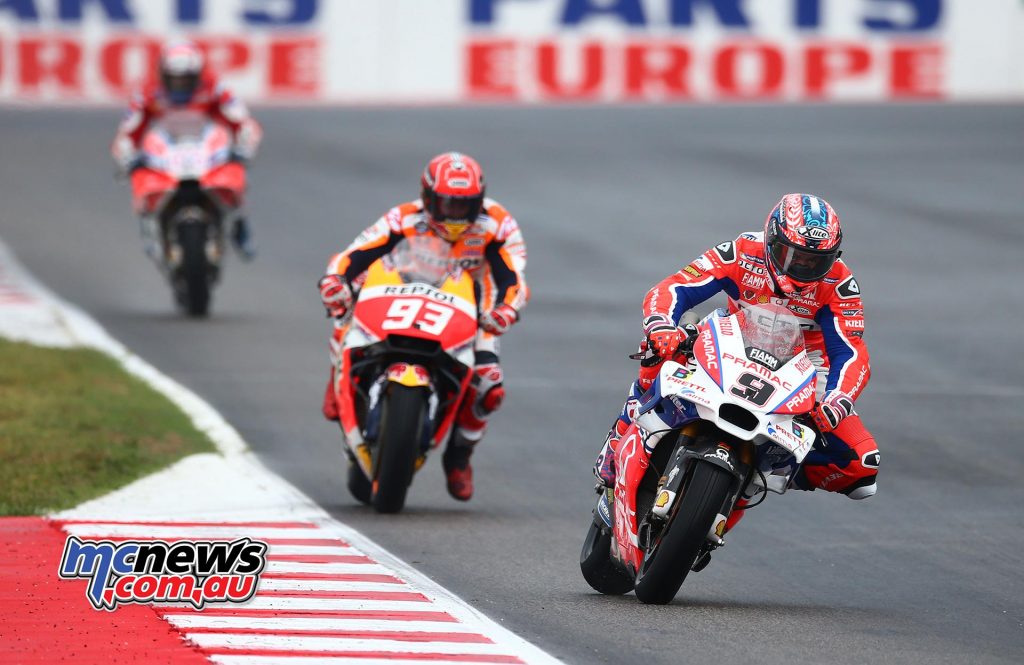 And on the last lap he decided he’d waited long enough and you could almost hear Petrucci’s big ol’ police heart break as Marc went past him. It was still quite broken when he ruefully shook hands with Marquez in Parc Ferme after the race. 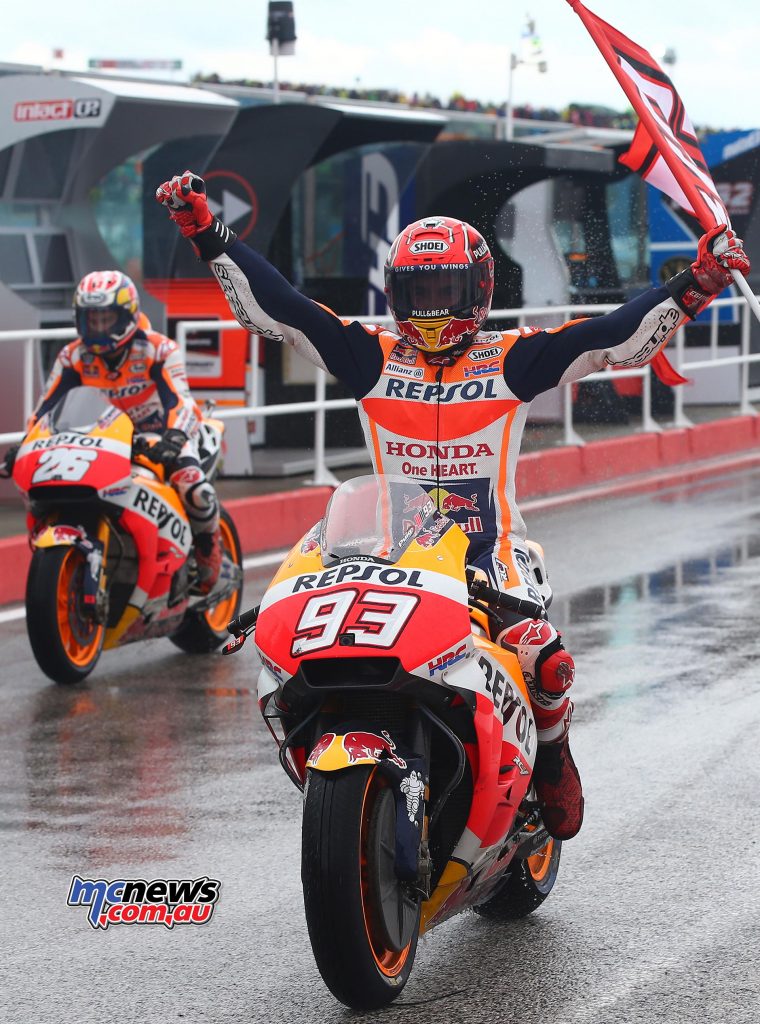 Marquez was all sunshiny smiles and buzzing with his win and the way he’d secured it. Danilo’s face was all about the broken ticker in his chest. 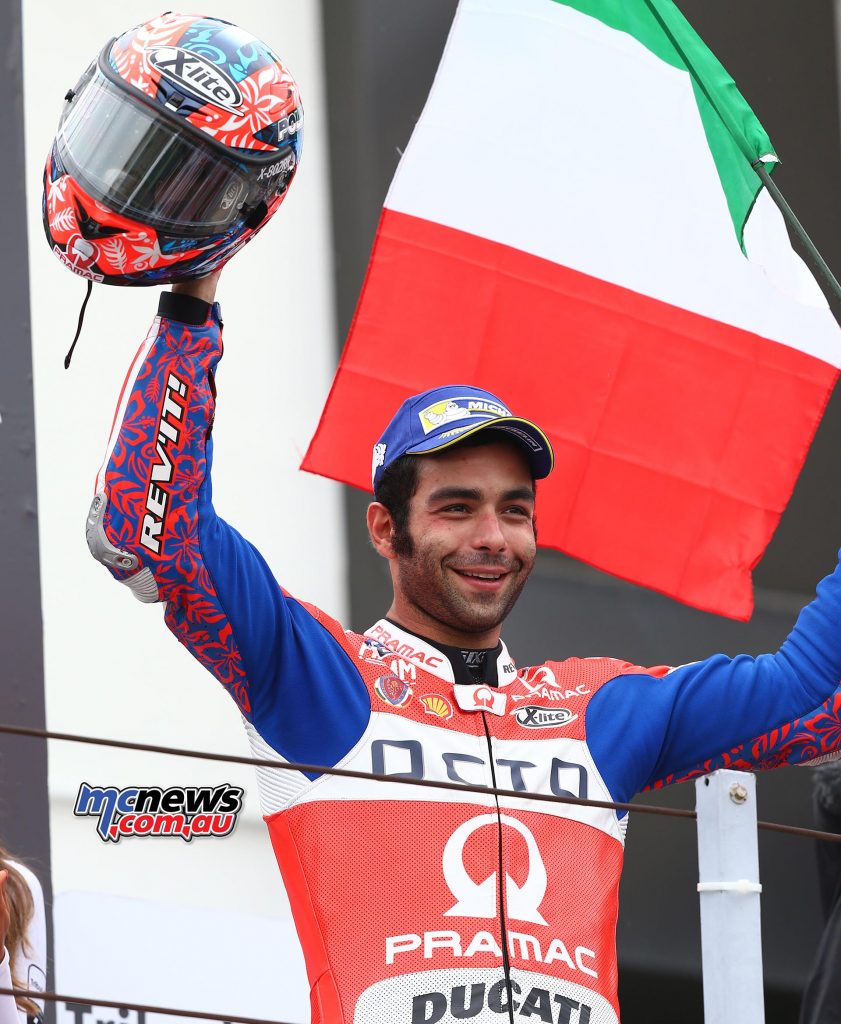 And Dovizioso’s face was relief personified. 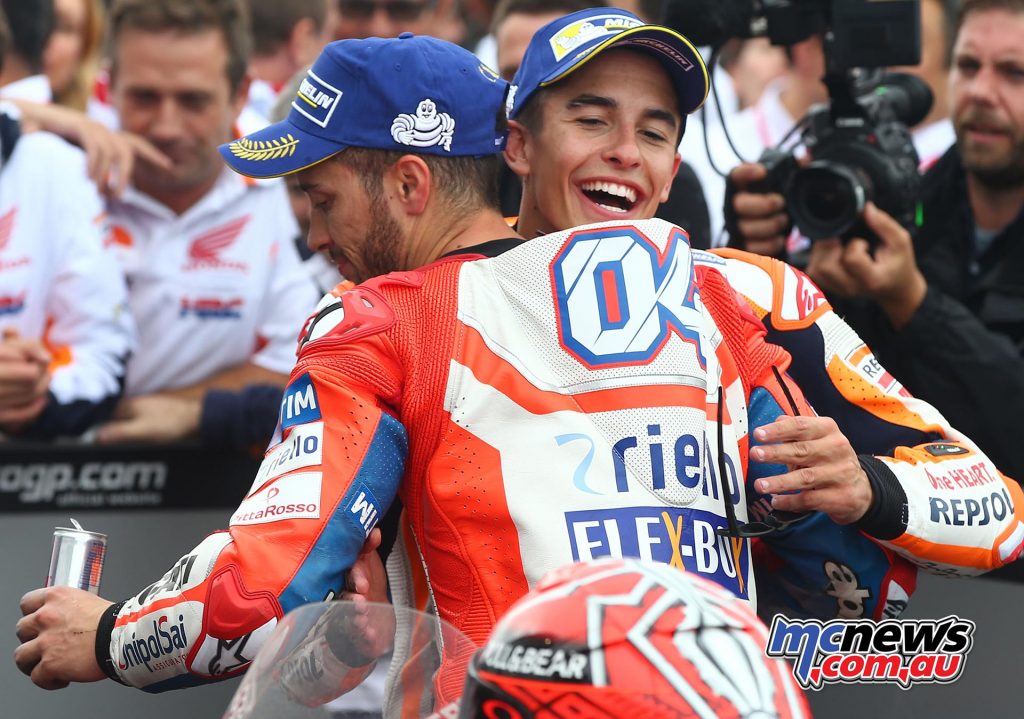 Jack Miller tried for a while and all of Australia has hopeful the wet conditions would encourage Jack to have a crack.  But Michele Pirro was not to be denied his wet-weather chance and Jack had to settle for a creditable sixth while ceding fifth to Pirro. 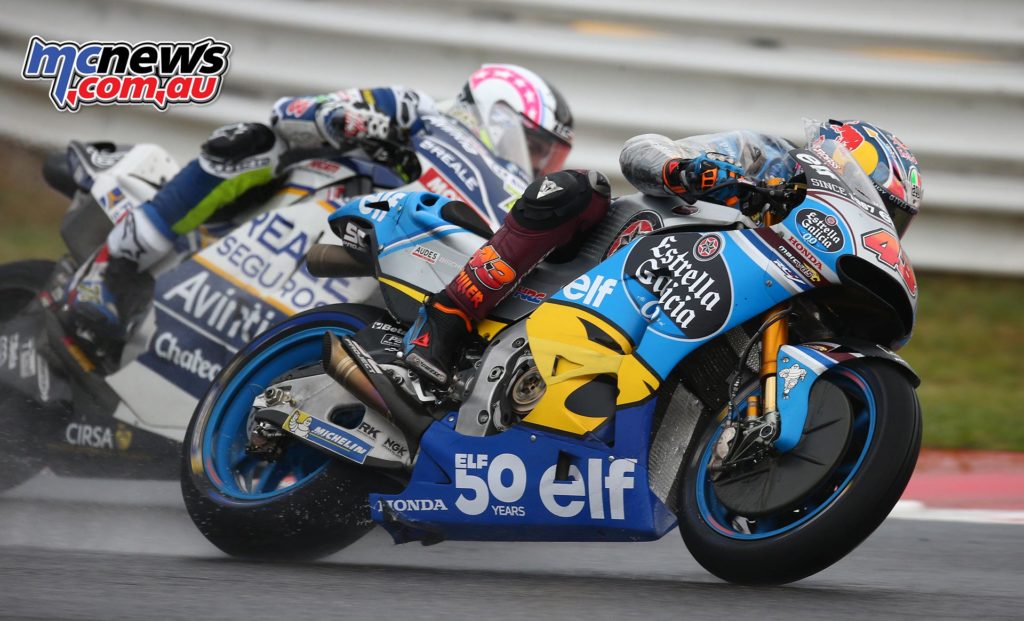 Tito Rabat ate gravel and thought about his new Ducati ride next year (who signed off on that?), and Andrea Iannone continued to disappoint Suzuki and developing his GSX-RR by wearing an overtight rainsuit over his leathers, giving him arm-pump and forcing him to retire even though the Suzuki was “running well”. 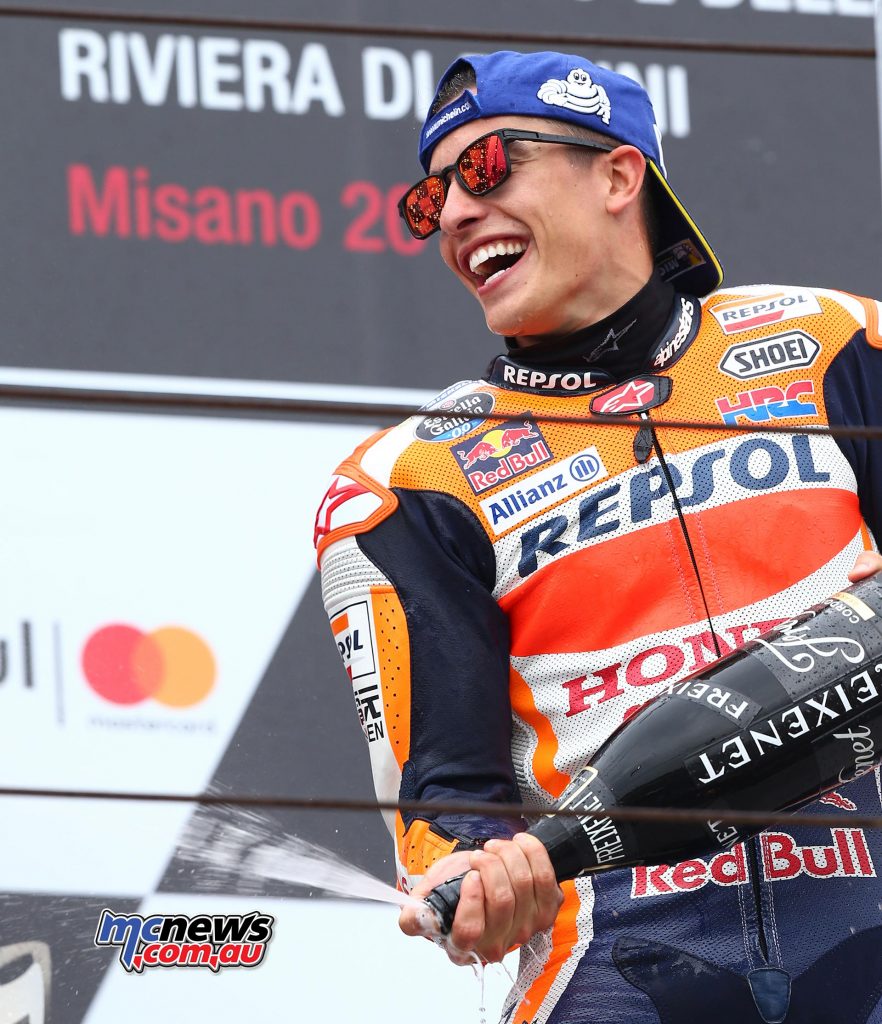 Which was probably on par with Sam Lowes who has now crashed his Aprilia more times than my old computer on a Monday morning. Both him and his Aprilia team-mate, Asparagus A, continue to befuddle the Aprilia engineers, but since Aprilia cannot afford anyone else except maybe Hector Barbera (who also crashed out), everyone just gets on with it. 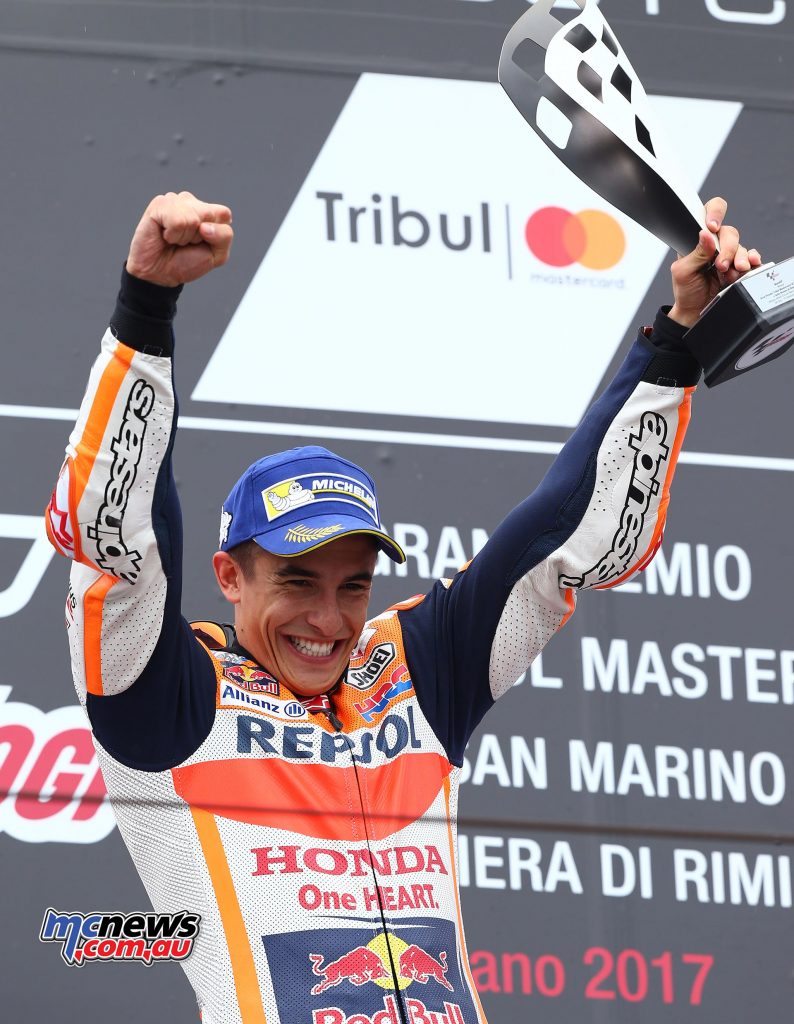 Everyone will be getting on with it on the 24th of September when the circus erects its tent in Aragon, the last European round before the fly-aways begin.

Will Dovi and Marquez take each other out in their battle for supremacy?

Will Rossi make a comeback much earlier than expected? Or will we have to wait until Motegi for the expected return of VR46?

Will Michael van der Mark do something truly remarkable on Rossi’s YZR-M1 at Aragon?

I have no idea, but I cannot wait to find out. 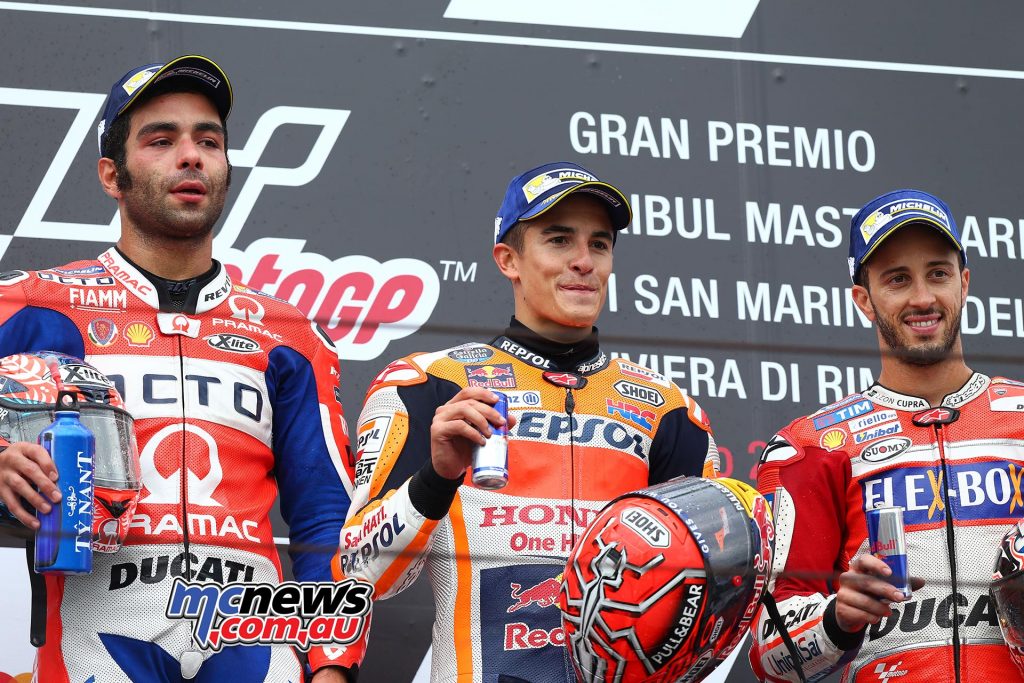 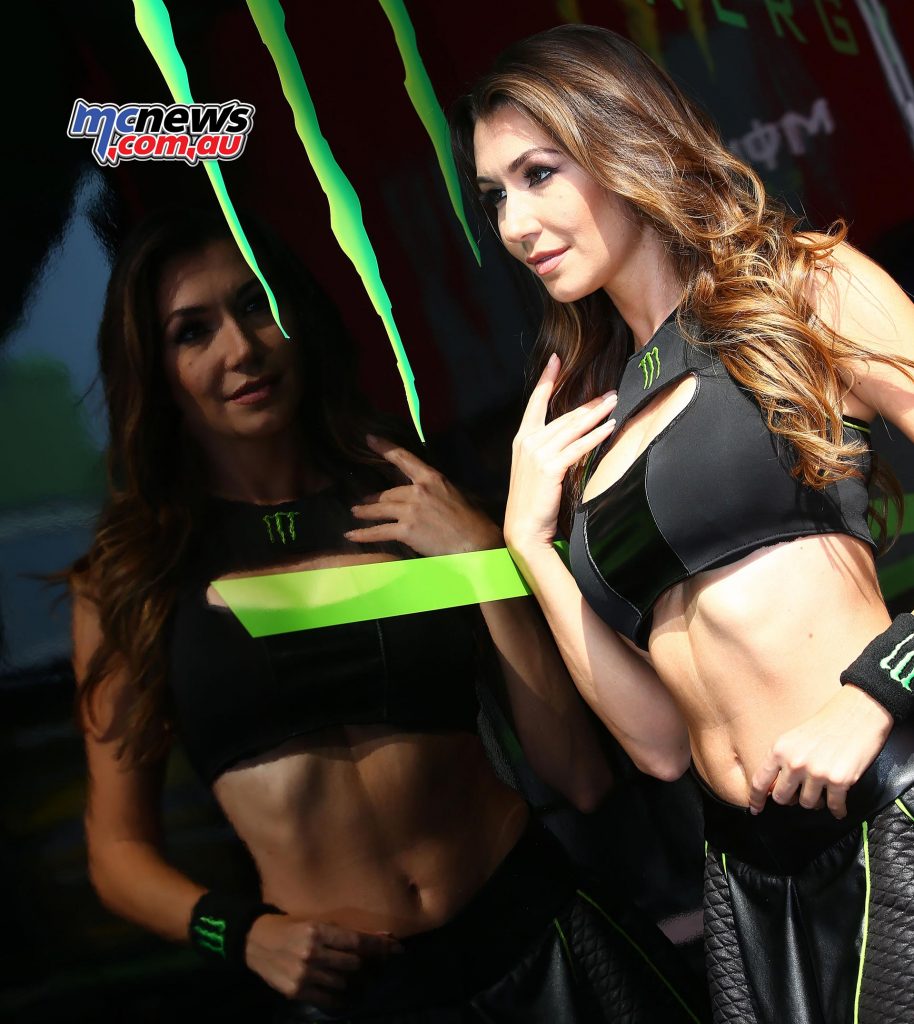 Shane Kinderis has his say on the ASBK ECU soap opera