Around the world with The Bear – Part 19

We last left The Bear in Portugal in Part 18, he now continues on towards Meknes in Part 19. Turns out crossing to Africa is easy. Dealing with the traffic can be a little harder.

We toured the old town, the Alfama, on the outfit and had trouble fitting through some of the narrow, steep streets. There are excellent, cheap restaurants here, specialising once again in seafood, and we had marinated fried tuna and grilled sardines.

The people gave us good-natured advice – don’t park there, traffic comes around the corner so fast! There was so much gesticulating that I understood Portuguese quite easily.

Trams run through the alleyways, and on blind corners there are men with table tennis bats – one side red, the other green. When a tram comes along, they show you the red side of the bat and you stop. Portuguese policemen are rather more fortunate than the Spaniards and get BMWs on which to ride around.

It was Millie’s birthday, and we bought her a cake, which was much appreciated. We also found a laundromat and did some long-overdue washing, and I invested in a litre of the cheap and delicious local pear brandy.

Going south again, we took the coast road through Simbales. It must have been a sleepy fishing village not too long ago, but has been caught up in the tourist trade now. A castle overlooks the town, looking suspiciously like a dozen other castles we’d seen in this country.

I have a theory that they’re mass-produced in cardboard and erected anywhere there are tourists, for atmosphere. Possibly they soak them in the kind of resin the East Germans were using for the Trabant cars, to make them rain-resistant.

Over lunch we were serenaded by a great flock of goats with bells around their necks. Shortly afterwards, I pulled out to overtake a truck and suddenly found a car coming the other way. I opened the throttle of the XS a little too far and we went past the truck on the back wheel. A rather unexpected bonus, considering the load we were carrying…

Our map showed a bridge across the river mouth here, but that turned out to be a misprint and we had to brave the Setubal one-way system again. Then we did something very naughty—an oil change by the side of the road, running the waste oil into a pit and covering it up. Considering that everyone else does the same thing, without covering it up, we didn’t feel as guilty as we might have.

In the Sines campsite we watched the Magic Roundabout on TV, dubbed into Portuguese; it didn’t seem to lose anything in the translation, and Zebedee was as cute as ever.

A German engineer we met suggested we take the mountain road rather than the coastal highway down to the Algarve. We were glad we’d followed his advice when we found a well surfaced, twisting road lined with enormous gum trees and pine forests. We did have one heart-stopper along here, however.

I had just paid at a service station when I turned around and saw the Yamaha wreathed in smoke. By the time I was half-way to the sidecar for the fire extinguisher, I realised that it was just steam. The attendant had washed some spilt petrol off the tank and the water had vaporized on the hot engine. Quite a relief.

We had organised the catering so that one couple bought the food and cooked for a week and then handed over to the others. When Neil and Millie handed over to us down on the coast, they had overspent badly and we had another argument.

The goodwill of Biarritz was wearing thin. Then Millie was cheated of £14 of the kitty, changing money at the border, and didn’t notice until we’d crossed to Spain on the rickety old ferry. It wore even thinner. Regrettably, things that don’t really seem to matter very much in normal life can take on great importance in the hothouse conditions of a long tour.

Our map showed a motorway from the border to Seville, but this turned out to exist only on paper, so we took longer to cover this stretch than anticipated. By the time we got onto the motorway to Cadiz, we were riding into the setting sun; and the last stage down to Algeciras was done in the dark. But it was a remarkably good road; we stopped for a roadside dinner with coffee and arrived at the campsite in good shape.

Neil and Millie took the XS to Granada to pick up the mail and Annie and I did some shopping for Africa, mostly packet soups and a bit of booze. We also chatted to a chopper-riding Swede in the campsite who had just returned from Morocco. He made it sound just like every other Muslim country I’d been to.

We were at the wharf quite early the next day to catch the ferry, and Annie went off to mail some letters while we were waiting. Neil and Millie decided to get the outfit on board to make sure it was out of harm’s way, and disappeared down the dock. Then, ten minutes before time, our ferry cast off and sailed! Annie returned and we stood watching our companions disappearing around the mole. Or so we thought.

Just then, an elderly French chap I’d been talking with earlier came over and asked us if we weren’t going to Ceuta. Of course we were, but – regardez, la bateau marche. Oh, non, he said. The Ceuta boat was farther down the wharf, but we’d better get there toute suit or it would go without us…

Annie and I were on the bike, down the other end of the wharf and aboard the good ship Virgin of Africa in a time that would have made Graeme Crosby proud. I always did have a habit of jumping to conclusions.

Going from Spain to to Ceuta is pretty much just like crossing the English Channel; even the ferries are similar—the main differences are that you get a view of the Rock of Gibraltar on this one, the crossing only takes two hours and you stay in the same country.

Ceuta is rather like a dusty, grubby Singapore with all the atmosphere of excitement that free ports get. The mailing slot in the post office is the mouth of an enormous brass lion’s head, which impressed me no end. The story goes that if you tell a lie while your hand is in the lion’s mouth, it will close and crush it. Not true. Heh.

The border was slow, but fairly relaxed. We were apprehensive, having heard horror stories, but the only horrible thing that happened was that we had to lay out a fortune for insurance. Customs seemed very keen on guns and radio transmitters, but we assured them the bikes held neither and they let us go.

We were stopped for papers twice before reaching our camp at Martil, but weren’t delayed much. Over dinner we discussed the financial situation, for once without acrimony, and Annie took over the management of our funds from Millie. The Martil campground was quite reasonable, with a reassuring wall and trees.

The amenities block, however, had a broken tank on the roof, which led to cascades of water pouring down the walls and over the door. It was rather like walking under a waterfall into a river cave to brush your teeth.

Tetouan, which we reached the next day, is the main tourist trap in the north and catches all the day-trippers from Spain. We parked in the main square while Annie went to change some money, and were handed all the usual lines: ‘I am from the tourist office. You are very fortunate, today there is the annual market, just one day….’ We had been told about this line, and assured that the market was not only on every day of the year, it also had prices especially inflated for the suckers.

‘You want some dope? My father grows best quality….’ I get rid of these guys by quoting, with a straight face, a Reader’s Digest story I once read on the horrors of ‘the weed’. We had a bit of fun there in the square.

The road south through the Rif is lovely, with steep, scrubby hillsides reaching up to snowy peaks on both sides as it winds up to the plateau. After a stop to buy lunch at Chechaouen, a pretty little hill village, we pushed on towards Meknes – pushed on rather carefully, too, as the road was lined with some unpleasant car wrecks and we weren’t keen to add a bike.

The light was failing when we reached Meknes, and the politeness of a Moroccan bus driver nearly killed Annie and me. A lot of vehicles have a small green courtesy light affixed to the back, which they flash when the road ahead is clear. I took this bloke’s word – or rather light – for it, but he was wrong. I made it back into the line of traffic with inches to spare.

We bring the first snow for 15 years to Meknes, next instalment. Who says motorcyclists can’t affect the weather? 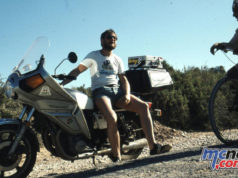 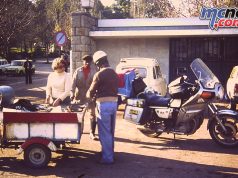 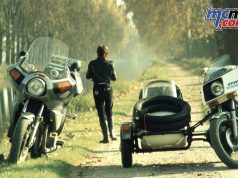 Around the world with The Bear | Part 17 | Marseilles to Biarritz