by Admin2
in AMA MX, Motorcycle News, Motorcycle Racing
A A
Share on FacebookShare on TwitterShare

A weekend off from racing couldn’t cool down Marvin Musquin, and neither could a deluge of rain. Musquin won both 450 Class motos at Unadilla — motos that were both shortened because of weather — to take the overall win at Round 10 of the 2017 Lucas Oil Pro Motocross Championship.

The Red Bull KTM rider has now won three consecutive overalls and six straight motos. Combined with a down day from points leader Eli Tomac, it looks like Musquin’s name is once again back in the title picture, although time is running out for him.

By the time the first moto got underway, the rain was pouring down, creating an extra challenge for the 40-rider field. Matt Bisceglia earned the holeshot, with his RCH/Yoshimura Suzuki teammate Justin Bogle behind him, followed by top qualifier Christian Craig. Craig was soon shuffled back to fifth after losing spots to Marvin Musquin and Blake Baggett.

But these last few weeks have been dominated by Musquin. The Frenchman entered Unadilla with four straight moto wins, and he soon worked his way past Bogle and Bisceglia into the lead with about 25:30 left on the clock.

Shortly after, Bisceglia dropped back to fourth upon getting passed by Bogle and Baggett. Unable to take advantage of the great start, Bisceglia later went down and did not finish the race.

One rider who wasn’t seen up front was Eli Tomac. The current 450 Class points leader was in just eighth place at the midway point of the moto.

As the weather continued to worsen, turning the track into a muddy, sloppy mess, Baggett made his move past Bogle into second place and found himself just a few seconds behind Musquin.

But while Baggett did everything he could to reel in Musquin, the weather started bringing heavy winds and then lightning. That forced officials to bring out the red flag, and because much of the race had already been completed, they opted to conclude the moto then and there with Musquin still leading.

Baggett, Cole Seely, Bogle and Craig rounded out the rest of the top five at the time of the red flag. Tomac ended up in 10th.

Following the conclusion of the first 450 Class moto, there was a weather delay that ended up lasting more than two hours. Although recurring lightning was the impetus for the delay, there was also heavy rain throughout much of that time which turned the track into a mud pit. There was standing water all over the track, part of which had to be re-routed for safety reasons.

Ryan Dungey to race opening round of AMA Pro Motocross

With second motos getting underway just after 5pm ET, the remaining races were shortened from 30 minutes plus two laps, down to 20 minutes plus one lap.

The second 450 Class moto didn’t start until about 5:50pm ET, but when it did, Musquin picked up where he left by taking the holeshot. Dean Wilson was next in line, though he briefly went off the track and had to re-join. Later on the first lap, Wilson’s teammate, Martin Davalos, charged past him to take over second.

Up front, Musquin and Davalos pulled away from the rest of the field. Musquin (1-1) ended up winning the shortened race by nearly 10 seconds to take the moto win and the overall win, while Davalos (8-2) set a new career-high for the second straight round by finishing second in the moto and second overall.

Wilson was unable to hold off a hard-charging Cooper Webb for third. Webb’s podium result matches the best 450MX moto result of his young career. Tomac landed behind them all in fifth.

A few hours after being officially named to the Motocross of Nations squad for Team USA, Seely (3-6) landed on the overall podium in third.

It was a disappointing day for Tomac (10-5), who finished ninth overall and lost championship points to both Baggett and Musquin. Tomac is now 27 points ahead of Baggett and 31 points up on Musquin with two rounds left, meaning that this title fight will likely come down to the final round of the season at Ironman Raceway.

This is all despite a poor outing in Moto 2 from Baggett, who went down at one point and ended up finishing 11th. It marked the first time this season that Baggett finished outside the top 10 in any moto. That leaves Wilson as the only rider who has scored a top-10 result in all 20 motos that have been run this year.

“Today was really tough, but I did have fun. It poured so hard and I understand why they had to red flag the first moto because of the lightning. We were late starting the second moto because of the storm but once the gate dropped I did my best to grab the holeshot and lead early on. I knew I needed to ride a smart race out front and not get passed in order to make it a bit easier on myself in all the mud. In moto one I had good battles with Baggett and in the second moto I know Davalos was right there behind me many times. I just wanted to control my races and I think that’s what I did. Nothing came easy though. I nearly crashed on the last lap of moto 2, it was so close, but thankfully was able to keep it together and finish in front. I’m really pleased with myself to go 1-1 in these conditions today, they were tough.” 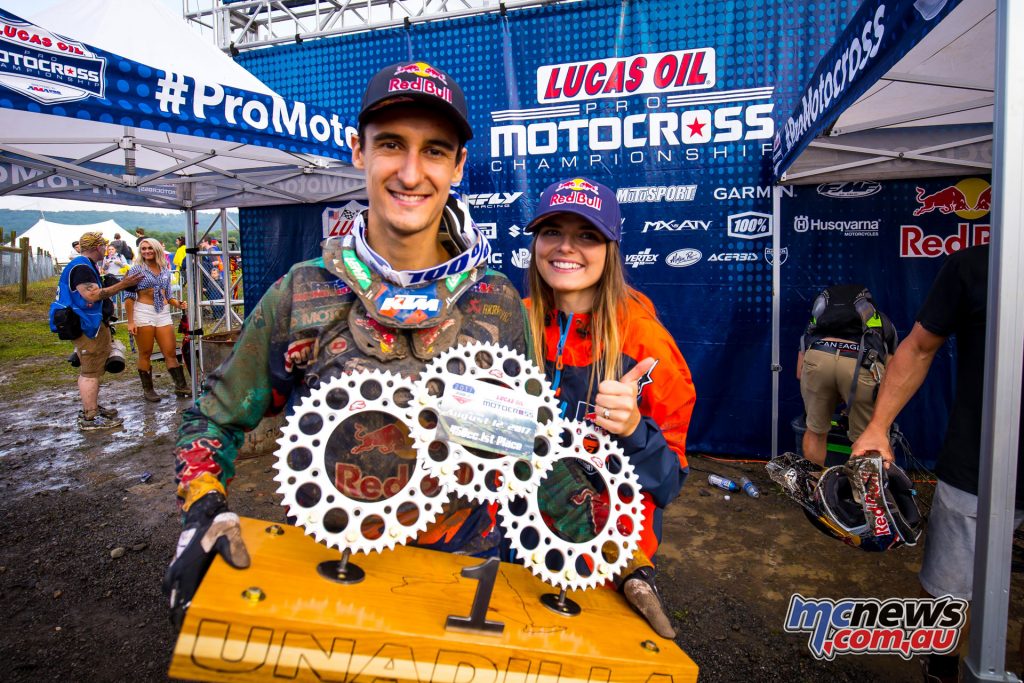 “Unadilla is an awesome track, everyone was watching the weather coming. They didn’t disc the track really deep like they normally do here because of the weather. I think it was a good call because it down poured during our first moto. It started around the third lap and there was a lot of lightning. I did my best, but the struggle with the goggles was difficult with the amount of rain we were getting. We lounged around for awhile before the second moto because we didn’t know what time we were going to go. I got a decent start and just put my head down. I stayed positive and came out with a second in that moto and it put me in second overall. I’m super proud of myself and proud of everything. I’m thankful to be where I’m at.” 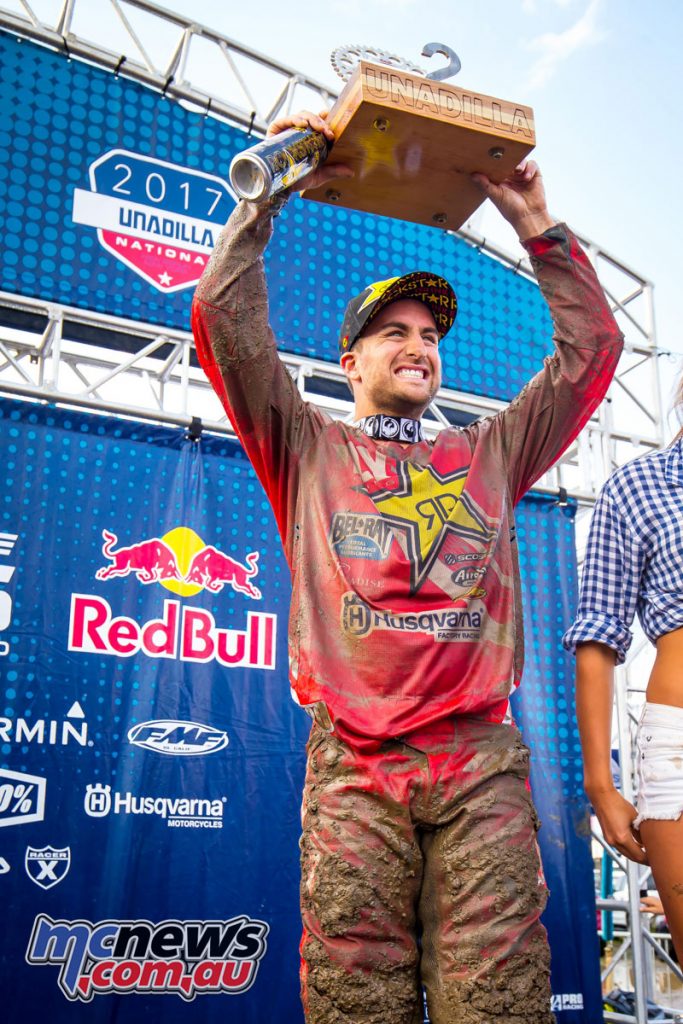 “I’m happy to walk away with some good points,” said Wilson. “I feel like my riding is probably the best it’s been this year, but it didn’t really show. We got cut short the first moto, then it started raining and was a mud moto. It was completely muddy the second moto. I’m still happy to walk away with sixth overall. It’s all good. I’m happy to move on to the next weekend and hope to have a good showing.” 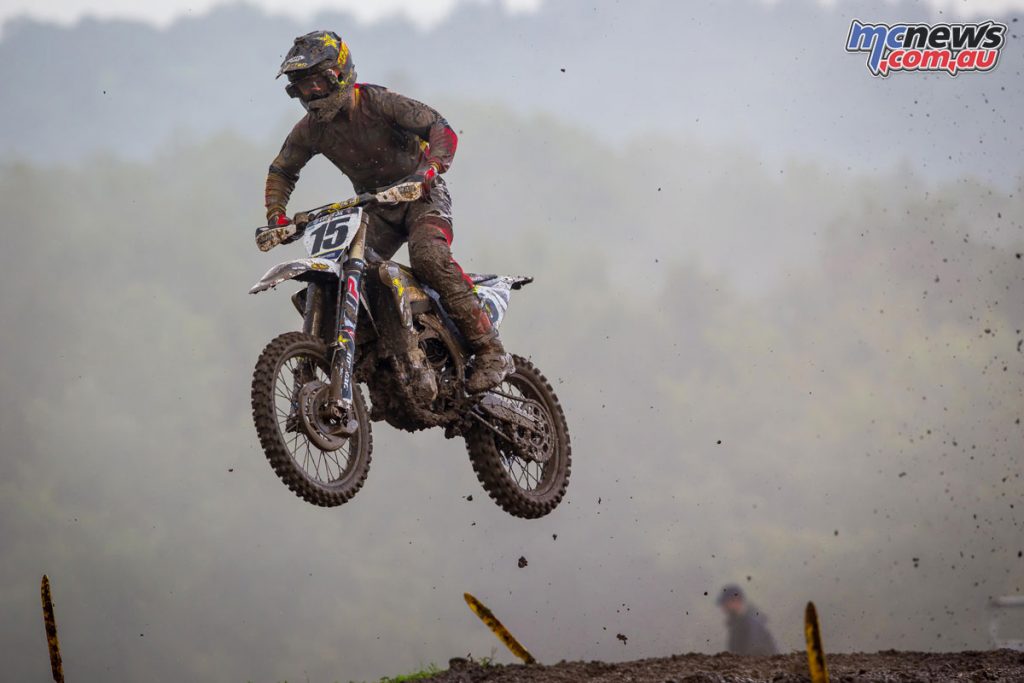