After intense months of design, development and testing MV Agusta have redefined the characteristics of the F4 with an ambitious underlying goal to make the F4 the most advanced hypersport bike on the market. We achieved this by creating three versions to form the new range.

Chassis control utilizing vehicle inertia sensors, a unique engine control with Ride-By-Wire system, Öhlins electronic control suspension and steering damper as well as GP spec titanium connecting rods. The unique and comprehensive technology of the F4 RR has been extended to the versions F4 R & F4, which also share several aesthetic and functional innovations. These include a re-proportioned and lighter “signature” four exit silencer, new lightweight forged wheels and a new front spoiler integrated into the front fairing with DRL (Daylight Running Lights) that enhance the design, as well as the new tail light incorporating light guide technology. All complemented with completely new graphics and colors.

These elements make the new F4 more advanced than ever before yet with total respect for the history of this iconic machine.

The front headlight is flanked by two distinctive light guides positioned on the leading edge of the spoiler: in this way an aerodynamic element becomes a distinctive element of the front view day or night, as well as helping to improve active safety by improved frontal visibility. Similarly the new rear light gains intensity through an integrated light guide.

Completely new wheel designs employing considerable weight reduction are now available in two versions: the first, F4, utilizing razor thin spokes and a silver finish, the second of F4 R, F4 RR, further reduces the weight and material thickness through the process of forging aluminum alloy, besides the implementation of a race inspired design. There has been a significant update to the four tailpipe exhaust system, a characteristic feature of the F4 from its incarnation. The two external terminals are now much shorter and tapered, the central pair extends up above the end of the tailpiece.

A four-cylinder advanced “short stroke” engine powers the entire F4 range. Piston diameters of 79mm are combined with a stroke of 50.9 mm. The peak rev limit has been raised to 14,000 RPM for the F4 RR.

The engine has undergone a thorough update of the induction system: the intake and exhaust valves now use a single spring instead of the two of the previous model. In this way the moving mass is reduced to the advantage of the speed reached by the motor and the speed and reactivity to engine rpm. The piston blanks are hard anodized treated to be even more durable and reliable. The connecting rods of the F4 RR are made of titanium and matched to a rebalanced crankshaft.

The oil circuit has been redesigned, inside and outside the engine crankcase with the aim of ensuring perfect main bearings and connecting rod lubrication increasing reliability, even under extreme working loads. The operating temperature of the engine is now lower, due to the greater radiator efficiency and new oil lines. The short-stroke inline four-cylinder is available in two power configurations: F4 and F4 R reaches 195 hp, while F4 RR is pushed to a record 200.8 hp.

50 mm diameter throttle bodies are employed with a revised variable length intake tract (TSS). The gearbox as on all the MV Agusta four-cylinder engines, is a six-speed unit, with the clutch featuring a mechanical slipper device. Four engine maps are available: three default and to customizable by the rider.

The central element is the Ride-By-Wire system: presented for the first time on the three-cylinder F3 675, it has been fully optimised and specifically redeveloped for the new F4. The system has electronic redundancies to ensure maximum effectiveness and the safety required: the data that arrives from the two potentiometers is cross-examined with analog signals, and a third sensor confirms the requirement of complete throttle closure. Two additional sensors are arranged on the throttle bodies.

Completely new and developed specifically for F4 is the inertia platform sensor arrangement: it uses three gyroscopes and three accelerometers and provides the electronic control unit an array of information about the of the vehicle dynamics, moment by moment. Consequently, the intervention of traction control and anti-wheeling are particularly accurate thanks to the encoder placed on the front wheel. This system permits improved safety characteristics as well as performance. Riding is therefore simplified for the pilot; a primary objective of the F4 project. The algorithms that define the function of the system MVICS, are in fact maximized continuously to provide the maximum available torque at the rear wheel, relative to the conditions of the asphalt and pilot request. The electronic assisted gear shift, standard on all three versions, reduces the amount of time required to change gears.

Another innovation is the system which allows you to choose your own settings in respect to the pre selected defaults, Normal, Sport and Rain. This enables you to customize five parameters (sensitivity of throttle, torque, speed limiter, engine response and engine braking), so you can construct a map of engine management that encompasses your personal riding style.

The structure and geometry characteristics of the new F4 are unchanged. The frame is comprised of two distinctive elements, developed by MV Agusta to offer the advantages of both solutions usually proposed individually. The main section of the frame, in fact, is made of CrMo steel tubes united to a pair of cast aluminum alloy plates which form a complete structure and the fulcrum point for the sculpted single-sided swingarm. The new frame has been further optimized to reduce weight without sacrificing rigidity. The F4 RR also is hand welded with TIG technology and uses a dedicated steel, with exceptional mechanical properties.

The three versions of the new model offer three distinct combinations of fork and shock while all providing the established traditional handling strengths of F4. The F4 equipment includes a 50mm diameter Marzocchi fork and Sachs shock that are both fully adjustable. F4 R utilizes a race specification Öhlins, again fully adjustable.

Technological excellence and complete personalization are distilled on the F4 RR: Öhlins suspension with electronic control allows the driver to choose between different setups directly from the dashboard. As aforementioned there are specific modes of power delivery for the four cylinder engine; the pilot, however, may also adjust the suspension in a completely autonomous way from the engine maps. The system provides separate control for compression damping and rebound damping, while customizing the spring preload is manual. The electronic steering damper allows to choose between manual or automatic adjustment, in which case the response varies as a result of vehicle speed.

The brake system on the F4 RR is state of the art in the hypersports category. It is composed of two 320 mm diameter front discs with steel flanges. They gripped by the new Brembo Monobloc M50; an absolute reference for performance, weight and stiffness with a specifically designed and dedicated radial pump. The system is completed by a four piston rear caliper together with a 210 mm diameter disc. The F4 and F4 R replaces the monobloc found on the F4 RR with the effective race bred Brembo M4 front brake calipers and Nissin master cylinders.

The new F4 range, consisting of the three versions (F4, F4 R and F4 RR), is proposed for 2013 with graphics and colors never seen before. Each version is available in two color combinations. 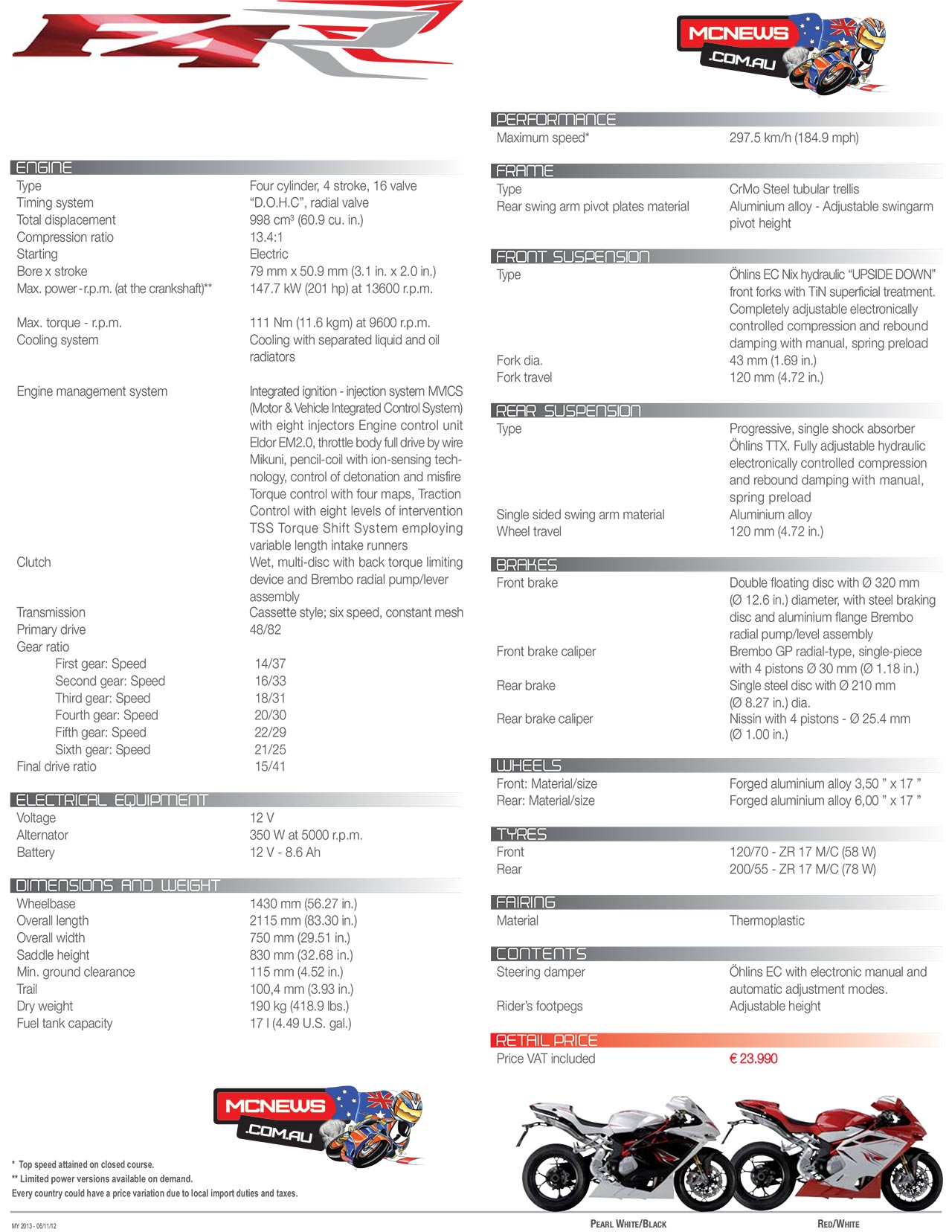