MCNews.com.au: ASBK Season 2014, is Phil Tainton Racing / Team Suzuki going to be a part of it?

Phil Tainton: “Well, we’re still trying to be a part of it, Trev, we’ve had some cutbacks that makes it more difficult, and with some changes in the ASBK I’ve lost a couple of sponsors and things are just generally tightening in the economy, so yeah, we’re still trying to make it happen, but at this point in time I’d have to say no.”

MCNews.com.au: So you’ve had to let Wayne out of contract or was he under contract? Where does Wayne sit from here?

“Contractually-wise, his contract ran out, we were just about to sign another one, but then we had some bad news, budgetary restrictions, some of their sponsors pulling out, so he didn’t sign the contract, so he’s not under contract. I’m trying to find him a ride overseas if I can. He would like to still keep racing in Australia, I’d like him to keep racing in Australia, but whether or not we can pull something together at this 11th hour I’m not sure.”

MCNews.com.au: So, if you don’t go racing, you’ll still prepare bikes for other people that want customer spec’ Suzukis?

MCNews.com.au:  So how long has PTR been running now?

Phil Tainton: “I haven’t added it up, Trev, it’s such a long time. I’ve started getting involved in road racing with PTR I think about 23 or 24 years ago, been working for Suzuki for 18 years and it’s been good, you know? I’ve been lucky, I’ve been in the right spot at the right time, I’m lucky enough to work with some great riders, some great machinery and Suzuki have been really, really good to me and it’s just the state of play and the economy at the moment.

“The series is a little bit late in starting and of course I think they think and MA also think that we’ve got lots of time before the first round, but the trouble is when you’re looking for sponsors, you need to know last year, you need to know halfway through the year before and that’s where we’ve been caught out.”

MCNews.com.au: So a lot of PTR business is people with street bikes that want to have suspension upgrades and engine upgrades as well.

Phil Tainton: “Absolutely, we do a lot of Hayabusa engines for circuit cars, hill climb cars and off-road buggy cars as well. So we’ve got that thing happening, we do a lot of motocross bikes, we do Suzuki Motocross team’s bikes, their heads, and we do a lot of fully complete engine builds for other teams and we’ve got a lot of other manufacturer teams that are interested in us doing their motocross bikes, so we’ve got that on tap and as I say we also get a lot of street bikes, a lot of suspension. Because we’re so vast in what we do, there’s always something happening and always something going, so I’ll just have to tap into that.”

MCNews.com.au: And apart from you and Lynne, how many full-time employees are there, three?

Phil Tainton: “No, just two, two full-time. Graeme is only part-time at the circuit so we’ve got Warren and Hayden, they’re on full-time and my two goals mainly are to keep Warren and Hayden employed, which I feel like I do quite successfully, and my other goal is to try and find Wayne a ride if I can’t supply him one.”

MCNews.com.au: OK, Phil, good to chat with you and I hope this take a turn for the better.

Phil Tainton: ” Thank you very much!” 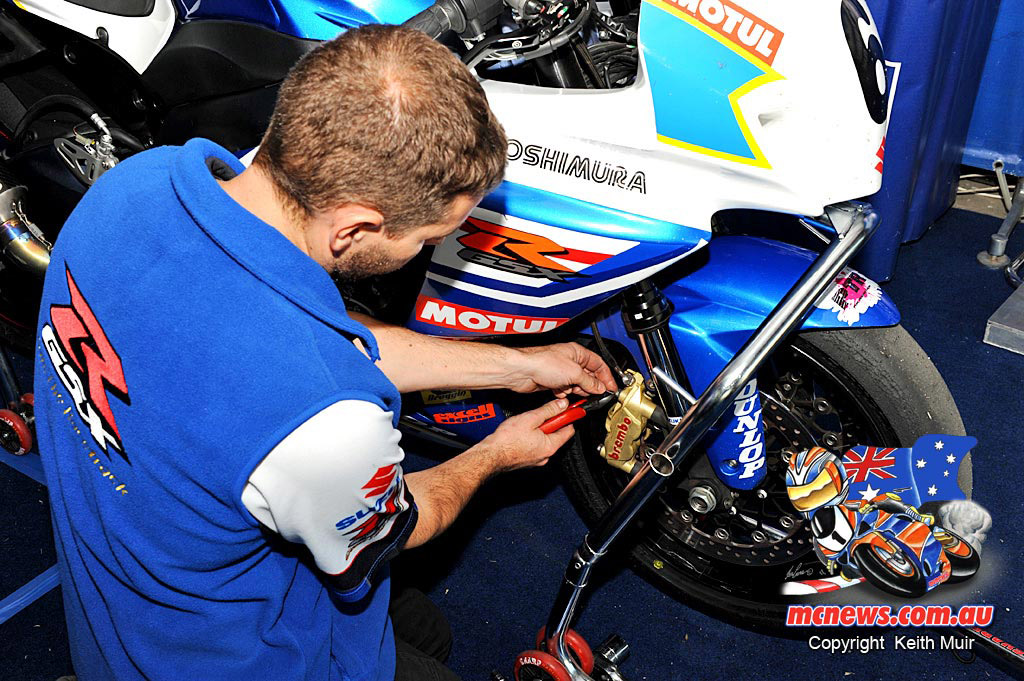