Shepparton saw strong action in the Pirelli MXD Championship, with Callum Norton taking his second round win in a row, edging out Cody Dyce for the win, as Dyce narrowed the gap on championship leader Roberts. With one round to go and just five points separating the top two, it’ll go down to the line.

With the title being decided in just two weeks’ time at Port Macquarie, the Under 19s competitors has one final opportunity to dash for points in Victoria, setting up their final round as a real deal nail biter.

The Pirelli MXD class got their round seven campaign underway with a chilly practice and qualifying session yesterday morning, and with the championship reaching boiling point, it was ‘on’ from the minute bikes hit the Shepparton surface.

With vital championship points up for grabs over the weekend, gate pick was imperitive, and it was Yamalube Yamaha Racing Team’s Cody Dyce who secured the first pick of the grid, thanks to a flying 1:34.909 lap time. Second fastest on track was red plate holder Jy Roberts (1:36.473), followed by Husqvarna rider Riley Dukes who set the third quickest time with a 1:36.707 hot lap.

When the Pirelli MXD bikes left the grid for their first race at Shepparton, it was Pozniak who was the first bike through the Raceline turn, followed by Roberts and Yamaha mounted Dyce.

Unfortunately for Raceline Pirelli KTM’s Fogarty, a small crash on the opening lap saw him lose significant positions, the KTM rider then forced to re-join the race in dead last place, and with a job on his hands if he was fight his way through the field throughout the opening 20-minute moto.

Only moments after Fogarty went down, Roberts also got cross rutted after moving in to the race lead, and what was only a small mistake then paved the way for title threat Dyce to move in to the Pirelli MXD top spot.

Immediately after Dyce had taken the lead, KTM’s Norton began to apply the pressure on Roberts for second, and thanks to sharp focus and perfect line selection, the KTM rider made the move on Roberts and snatched up second place.

After only six laps, the MXD class had dished out plenty of carnage, with competitors being caught out all over the place by the challenging Shepparton circuit, but Dyce continued to look smooth and comfortable in the lead, while Norton and Roberts continued to maintain the remaining podium positions behind him.

By the halfway mark in race one, Dukes had made his way in to third and relegated red plate holder Roberts to fourth, while behind the number #100 Husqvarna machine, Pozniak, Bulk Nutrient WBR Yamaha rider Hugh McKay, and Liam Walsh continued to battle it out for positions within the top five.

With only a handful of laps to remaining, Dukes went down whilst battling for third, slipping from a podium position back to 12th.

And when the chequered flag flew after 20 minutes it was Dyce who not only kept his Yamaha upright, but navigated the rutty Shepparton circuit for 13 gruelling laps to collect the first MXD victory of the day. Second place in race one went to KTM mounted Norton, while championship leader Roberts held on to finish in third.

Pozniak and McKay completed the top five, while Jai Constantinou, Isaac Ferguson, Brodie Ellis, Fogarty and Walsh all rounded out race one inside the MXD top ten.

By the time race two kicked off for the Pirelli MXD class, the temperature had plummeted at Shepparton, adding yet another element for competitors to contend with. When gates dropped it was Roberts who secured the final Raceline holeshot, but after a nightmare first moto Fogarty was out for redemption and moved into the race lead after only a handful of turns.

But disaster struck the KTM rider after only a lap – whilst battling for the lead Fogarty’s bike locked up, and unfortunately the young rider was forced to return to the pits on foot, recording a DNF in the final moto of the day.

With Fogarty out of the final race, Husqvarna mounted Roberts and KTM’s Norton checked out on the field, leaving the likes of Dukes, Yamalube Yamaha Racing’s Dyce and Pozniak to battle for positions behind him.

But in what was the trend at round seven, the drama continued. After four laps, word was received that race leader Roberts had received a 15 second ‘in-race’ penalty, seeing him drop back to fourth place in the official standings, and with significant time to make up throughout the remaining 12 minutes.

With Robert’s officially relegated by 15 seconds, Norton became the new race leader, followed by Dukes, while the number 100 red plate holder Roberts moved up to third.

By the halfway mark in the final Pirelli MXD moto, Norton continued to lead from Roberts, who had made up enough time to slot into second place, third position was occupied by Dukes, followed by Dyce, Pozniak, Barham, Ellis and Josh Tredinnick.

With 16 minutes run, Dyce had moved in to second place, the Yamaha rider doing everything he could in order to snatch up as many championship points as possible before the MXD class wraps up their championship at the following round.

When rider’s received the last lap board, it was official race leader Norton looked flawless and ready to take the race win, while behind him Dyce, Roberts and Dukes were all vying for the final podium positions.

And when the chequered flag flew for the final time at Shepparton, Norton secured the last race win of the day, second place went to Dyce, followed by Roberts who’s ‘in race’ penalty pushed him back to third. Dukes and Barham wrapped up race two in fourth and fifth places respectively, followed by Pozniak, Ellis, Ferguson, Jye Dickson, and McKay who completed the top ten.

With 2,1 race results it was Norton who left Shepparton with his second consecutive round win, second place on the Pirelli MXD podium went to Yamalube Yamaha Racing’s Dyce, while championship leader Roberts concluded Round 7 in third.

“The first half of the season was pretty rough so it’s been good to get a couple of wins under my belt, I felt really good out there today, we made a couple of changes to the bike for the second moto and I’m stoked that we got another overall. I had Hattah last weekend, and I’ve done pretty well at the Vic titles lately so the confidence is back and hopefully I can finish off the season strong at the last one next weekend.”

Roberts now leads the Pirelli MXD title chase by five points with a single round remaining.

“I didn’t ride well at the last round at Nowra and I just wanted to get back on the track and redeem myself as quickly as possible. It wasn’t even about the result but just riding the way I know I should ride and bringing the same energy and effort to each and every race and I felt I did that today. I’m going to run the same plan at the final round and see what happens as I really have nothing to lose. Just give it my all and see where it takes me. My bike was awesome today, so thanks to everyone on the Yamalube Yamaha Team for their support and encouragement over the past few weeks,” Dyce ends.

“It was just an average day for me and I felt just a little off in both races. I struggled to get a good flow in the turns early in the race and lost time to the leaders on the first couple of laps. Once the race settled down, I felt better, but it still wasn’t my best day. I will continue to work hard over the next couple of weeks and look to finish the championship on a strong note as a podium finish is still within reach.”

The Pirelli MXD class’s 2017 championship will wrap at Round 8 of the Motul MX Nationals which will take place at Port Macquarie in New South Wales on Sunday July 30, 2017.

The Yamaha 125cc Gold Cup category had their second outing for the year as the support class at Round 7 of the Motul MX Nationals at Shepparton yesterday, with Husqvarna mounted Cody Mackie finishing undefeated for the second time this season.

From the moment that Mackie hit the track yesterday, the experienced rider proved that he was in Shepparton for business, securing the first pick of the grid with the top lap time, a 1:39.231.

While it was the local knowledge that paid off for Bulk Nutrients WBR Yamaha’s Matt Ryan who was the second fastest qualifier (1:40.842), followed by veteran Yamaha rider Cameron Taylor who concluded the session third (1:41.859).

In race one it was Ryan who shot off the blocks and into the lead ahead of fastest qualifier Mackie and Joel Hall, and after only one lap on the incredibly technical Shepparton circuit, Ryan was four seconds a lap quicker than any of his competitors.

But with a 125cc Gold Cup title on his mind, Mackie wasn’t letting Ryan out of his sights, and over the next handful of laps Mackie closed in on the Bulk Nutrients WBR Yamaha rider’s rear wheel.

Behind the top two, third fastest qualifier Taylor began to make his way through the field and up to third position, while behind him Cory Watts and Hall completed the top five.

By lap four, spectators were treated to the battle they had been waiting for. Mackie closed in on Ryan and eventually made a pass stick on the rutted out Shepparton circuit, moving in to the race lead for the first time in the moto.

And for the remaining laps Mackie was flawless, keeping both Ryan and Taylor at bay to collect the opening 125cc Gold Cup victory at Shepparton. Second in race one went to Ryan, while Taylor took the final podium position. Kerrod Morrissy and Watts completed the top five, followed by Steven Powell, Geoff Braico, Joel Hall, Joshua Hart and Karl Claridge.

In the final moto for the Yamaha 125cc Gold Cup category, competitors were forced to contend with the most challenging conditions of the day.

However, despite the deteriorated surface, Husqvarna mounted Mackie didn’t bat an eyelid – the retired former professional racer rocketed out of the gates and in to the race lead where he stayed for the duration of the moto, allowing the battle for positions to happen behind him.

And battle they did – KTM rider Morrissy, Taylor (Yamaha) and Shepparton local Ryan went at it for a total of 15 gruelling minutes plus one lap, keeping the fans well and truly entertained for the final time at Round 7.

And when the chequered flag flew on race two it was Mackie who secured the win by a comfortable 2.6 seconds, Morrissy held off his hard charging competition finishing in second, while Taylor and Ryan wrapped up the second moto in third and fourth places respectively. Finishing more than 30 seconds behind the top four riders was Braico in fifth, while Hall, Powell, Oates, Matt Watson and Drew Micallef concluded the top ten.

With 1,1 race results Mackie finished his second outing in the Yamaha 125cc Gold Cup class with a flawless scorecard and on the top step of the podium at Shepparton, second overall went to KTM mounted Morrissy, while Yamaha rider Taylor completed the 125cc podium. 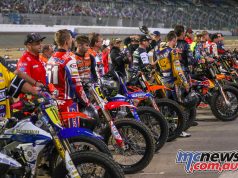 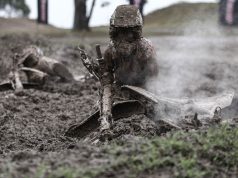 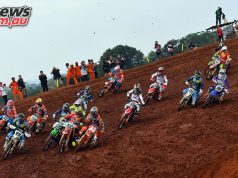