The first day of the 2012 MotoGP testing season provided mixed results for the Honda riders at the sultry Sepang Circuit in Malaysia. Dani Pedrosa (Repsol Honda RC213V) finished with the day’s second fastest time while team-mate Casey Stoner (Repsol Honda
RC213V) retired early after an old back injury flared up. The two newest riders to the Honda camp had encouraging starts. Alvaro Bautista (San Carlo Honda Gresini RC213V) was ninth fastest while Stefan Bradl, the MotoGP rookie and 2011 Moto2 World Champion, was only half a second behind in his debut on the LCR Honda RC213V.

Anticipation was high on the first of three days of testing at the start of the 2012 season, with the garages brimming with new technology and riders eager to test it. But overnight and morning showers doused the track, keeping the 17 riders, including two test riders and three CRT riders, in their pit boxes until late in the morning. Once the track was dry, Pedrosa put in a full day’s work completing 48 laps of the Sepang Circuit, the most of any rider. His efforts paid off with the second fastest lap time of 2m, 2.003s. Only former world champion Jorge Lorenzo (Yamaha) was faster, and only by .346s.

Pedrosa’s time compared favorably to the 2m, 1.462s lap that he turned to earn the pole for the 2011 Malaysian GP. The race was later canceled after the horrific accident that took the life of rising star Marco Simoncelli (San Carlo Honda Gresini RC212V) on the second lap.

What Pedrosa quickly discovered was that Repsol Honda RC213V is a much more physical motorcycle to ride than the previous RC212V.
Despite being in peak physical condition for the first time in years, he admitted at the end of the day that he was a bit sore after having not ridden a MotoGP machine for close to three months. But the discomfort was a small price to pay for the data gathered over the course of the day’s work. Honda has provided Pedrosa with more than one chassis specification, but he chose to stick with one bike and make incremental changes before the heart of the testing begins in earnest on Wednesday.

Stoner’s day was over almost before it began. The two-time world champion was stretching before putting on his leathers when his back suddenly locked up. So severe was his predicament that he needed help just to be moved into a less painful position. A physiotherapist eased the pain enough so that he could get into his leathers and take to the track, but he quickly discovered there was nothing to be gained and retired for the day. More physiotherapy was performed before he returned to the hotel to prepare for the second of the three days, which he’s certain of riding. Stoner first injured his back years ago, while racing the Dutch TT during his 125cc days.

Bradl declared himself “satisfied” after his first laps on the LCR Honda RC213V. The young German had ridden the 800cc RC212V at the November Valencia test, but that was so long ago that he couldn’t make a comparison to the larger displacement machine. What impressed him greatly about his new ride was the seamless gearbox, which shifted so smoothly that it didn’t upset the motorcycle while leaned over. Much of the day was spent on riding position; the brute power of the RC213V made it imperative that his body be properly positioned on acceleration. Once properly situated, Bradl could concentrate on handling the physicality of the machine, which requires far more strength to race than the Honda-Kalex he raced to last year’s Moto2 title.

Bautista finished ninth, but less than .2s from sixth on his first day on the San Carlo Honda Gresini RC213V at the Sepang Circuit.
Bautista ended the 2011 season badly with a crash in the first turn of the Valencia Grand Prix and he’d also started the season badly, crashing out of the Qatar Grand Prix in practice. The Qatar crash required that pins be inserted into his left femur, pins which were surgically removed in mid-December. Now 100% healthy for the first time in a year made adapting to the new motorcycle much easier for Bautista.

The test continues Wednesday and Thursday with similar weather expected.

Dani Pedrosa (Repsol Honda RC212V): 2nd, 2m, 2.003s “Today was good. For the first laps I think it was important for me to come back and just ride again. Of course, the first day I was a little bit stiff, not totally smooth on the bike, but we completed some laps and they were good. Today was mainly a test for myself, to get used to the bike again, recover the feeling, feel the throttle and the brakes after a long time off. The whole day I stayed with the same bike that I tested in Valencia in November and tomorrow the real test will start for us. We will work on the setup and probably try a modified chassis that Honda has brought here according to our requests after Valencia.”

Casey Stoner (Repsol Honda RC212V): 14th, 2m, 7.163s “I was stretching this morning for a good twenty minutes preparing to go out on track for the first time and then all of a sudden my back just locked up on me. I couldn’t move or do anything. I had to call someone to come and help me move into a position that was less painful! Then I had some physio on it straight away trying to get it better for this afternoon, but it wasn’t feeling good. I had some more physio after lunch, but it still wasn’t easing up. I felt I could have gone out on the bike in the afternoon, but we all agreed it would probably make it worse for tomorrow. We have two more days testing here in Sepang, we know the track well and we are getting to know the bike, we just need some time to test the new parts we have here to give feedback to HRC. I think tomorrow the track conditions will be better and as long as my back improves overnight we should get back on schedule with our testing programme tomorrow.”

Alvaro Bautista (San Carlo Honda Gresini): 9th, 2m 02.869s “This was my first day on the RC213V and I am very pleased with it because I instantly felt comfortable riding a ‘thousand’. Obviously after a three-month break from racing it is not easy to get back out there because you have to reset your mind and body to the task and rediscover your pace. We have worked on adapting the bike to my riding style and I have just tried to get confident without worrying about lap times at this early stage. I am satisfied because I am working well with the team and everybody is putting in a lot of effort. Over the next two days we will work on general set-up and the electronics but I am already feeling positive because we are not too far off the fastest times and we haven’t started pushing yet.”

Stefan Bradl (Team LCR Honda RC213V): 11th, 2m, 3.668s “I am quite satisfied about this first outing aboard the new bike.
After a few laps I was impressed by the potential of my machine and I did not find it particularly physically demanding as I trained a lot in the winter break. We mainly concentrated on my riding position adjusting the seat, the handlebar, the foot rest and so on. Later, from 1:00 to 4:45 p.m. we worked hard including the electronic side, chassis regulations and tyres changing: I posted my best lap time on hard rubber. So far I can say it was a productive day for everybody.
Now I need to look at the data to fix more adjustments for tomorrow.” 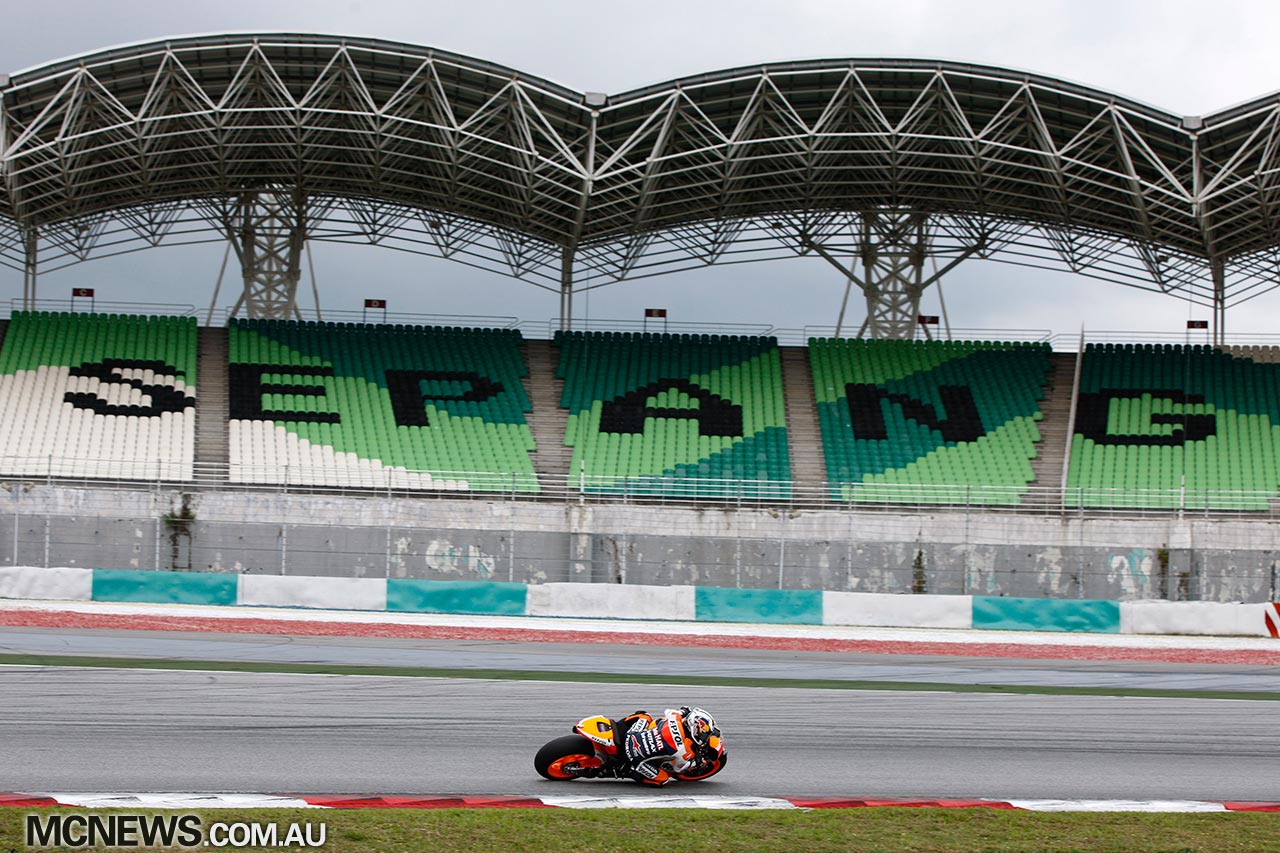 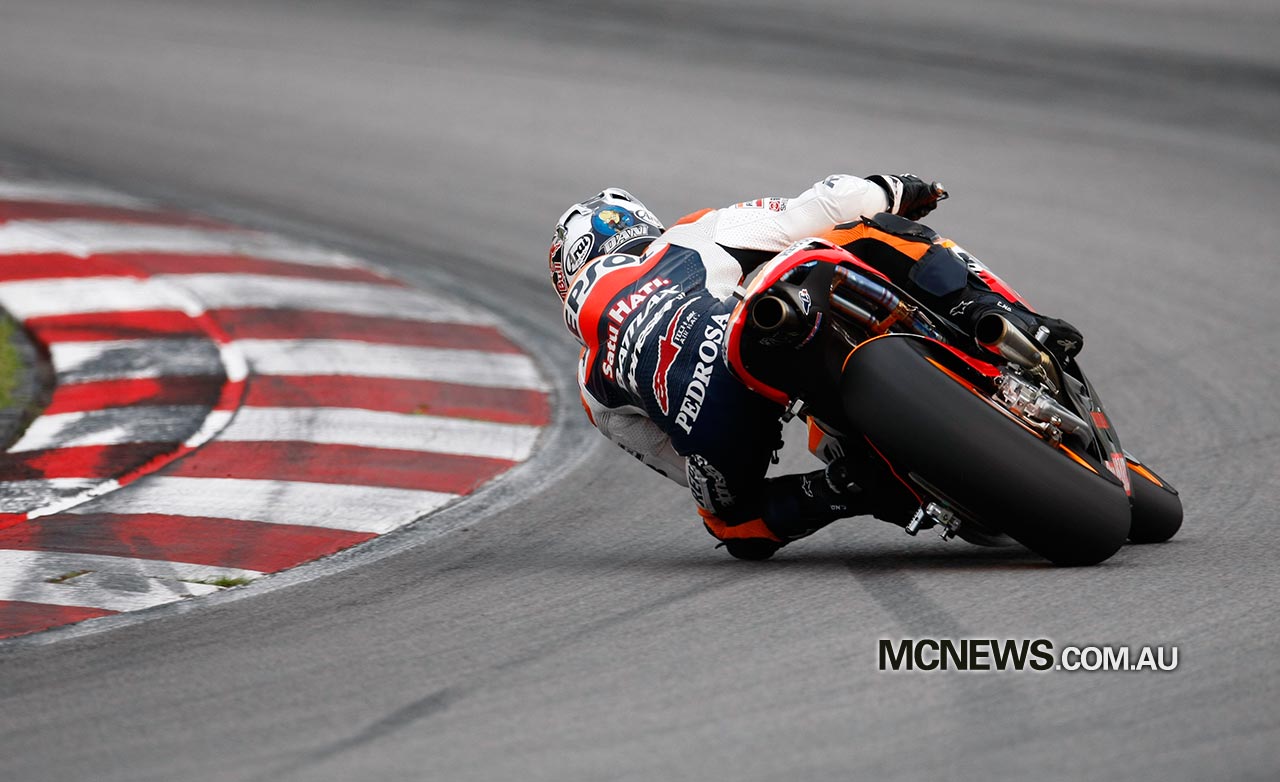