—  Indianapolis 450 Class Report: The heats and LCQ got all of the main players into the main event and it was James Stewart and Davi Millsaps side-by-side going into the first turn but by turn two Stewart had the lead from Millsaps, Ryan Villopoto, Matt Goerke, Ryan Dungey and Andrew Short. 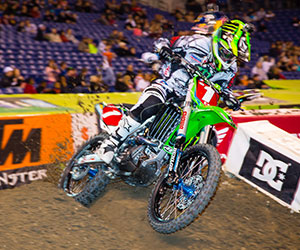 There were first lap crashes for Mike Alessi, Rob Kiniry, Josh Hill, Jake Weimer, Ryan Sipes and Trey Canard who came together with his teammate Justin Barcia midair on the finish line jump and crashed hard. He got up eventually and is reported to be ok.

Out front Stewart is just holding Millsaps at bay who in turn has RV and Dungey on his tail, this is a four rider dog fight for the lead and bang, Stewart is down handing RV the lead who had just passed Millsaps. 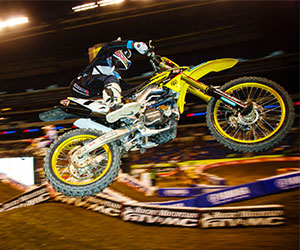 leader up and giving Dungey and opportunity for his second win of the season but RV counters with several fast laps forcing Dungey to settle for second place well ahead of Stewart who passed Millsaps who slid out with just a few laps remaining.

Villopoto’s 30th career win extended his points lead to nine over Millsaps with six rounds remaining but mark my words, this is not over yet. “James was riding great tonight,” said Villopoto. “Lucas Oil Stadium has been great to me, it’s an amazing stadium and I love coming here. Ryan was able to make up some time on me here and there, but I just kept pushing hard until the end.”

Barcia managed to hold on to fifth place from Chad Reed who started the race back in 16th place and moved his way steadily forward to finish a well-earned 6th place and with Canard’s early race crash Reed now holds fourth place in the championship. 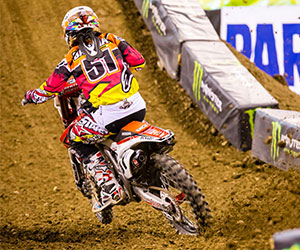 nd Weston Peick round out the top ten. That is three KTMs in the top ten, unheard of or even possible one season ago. 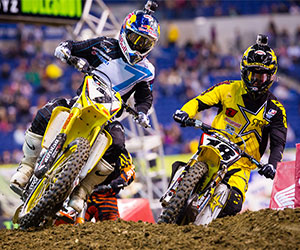 —  Indianapolis 250SX Class Report: The big news of the heat races was the crash and hospitalization of championship favorite Dean Wilson who crashed while battling his teammate Justin Hill for the lead during their heat race. Wilson did actually ride back to the pits after the crash so we are waiting for news as to why he went to hospital – just in, it is a suspected shoulder injury.

Blake Wharton pulled the holeshot in the 15 lap main event and with Wil Hahn and Marvin Muquin in last and second last after a first corner mishap this was Wharton’s race to lose. 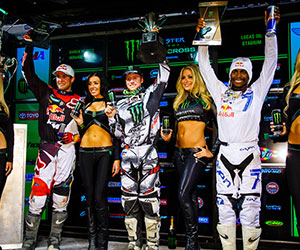 Musquin was on an absolute blitz and stormed his way through the pack and with one lap remaining had a lot of work to do to catch Wharton who more or less had the race in the bag until the Suzuki pilot cartwheeled after swapping out in the whoops.

Very rarely has a rider come from last to first in any race so Musquin’s performance was sensational and the French rider is now just nine points back from championship leader Wil Hahn who scored third place, also a great ride after the first corner incident.

“We have been talking about confidence, and tonight I had it,” said Musquin. “I fought really hard, and I believed in myself. Anything can happen out the 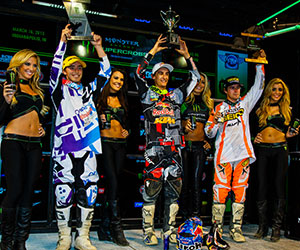 “I gave it away here tonight,” said Hahn. “I have to go home and do my homework to get back on top of the box. I am happy that I was able to work my way back to third, but need to win races.”

Kyle Peters scored his first podium for the year while young Adam Catanzaro had his nest AMA Supercross performance with an 8th in his heat race and almost scoring a podium finish after spending most of the race in third place to eventually finish in fourth place. AC tweeted, ‘best day of my life, can’t stop crying’.

Aussie Jackson Richardson and Taylor Potter qualified 23rd and 31st respectively before Richardson threw down a solid heat race to finish in fifth place while Potter had to go to the LCQ after a poor start in his heat.

Unfortunately Potter had a similar start in the LCQ and couldn’t make any progress so had to watch the final from the pits. Thankfully Richardson scored his first decent start and held down 3rd place for the opening two laps, then fourth place for the next two before crashing back to 12th place. Richardson struggled with a bent bike for the remaining laps and finished a disappointing 18th place.

Former Australian Supercross Champions Gavin Faith and PJ Larsen finished 8th and 11th respectively while another Australian SX regular Steven Clarke finished 12th. Faith was battling for fourth when he high-sided over the back wheel of the hard to pass Vince Freise. 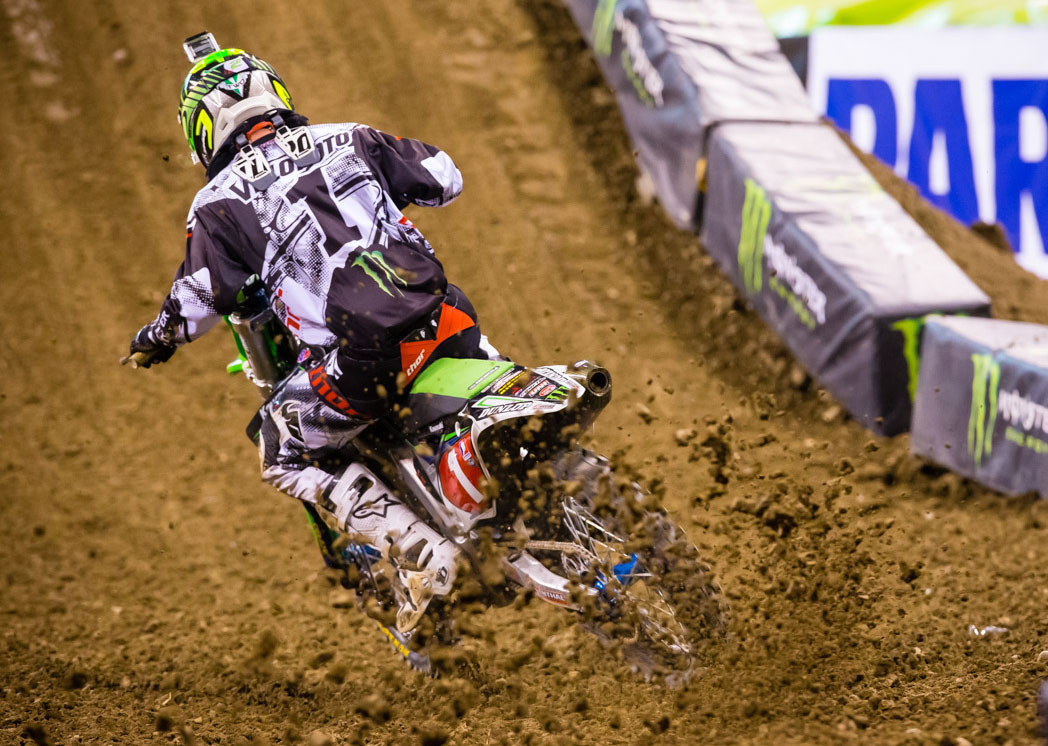 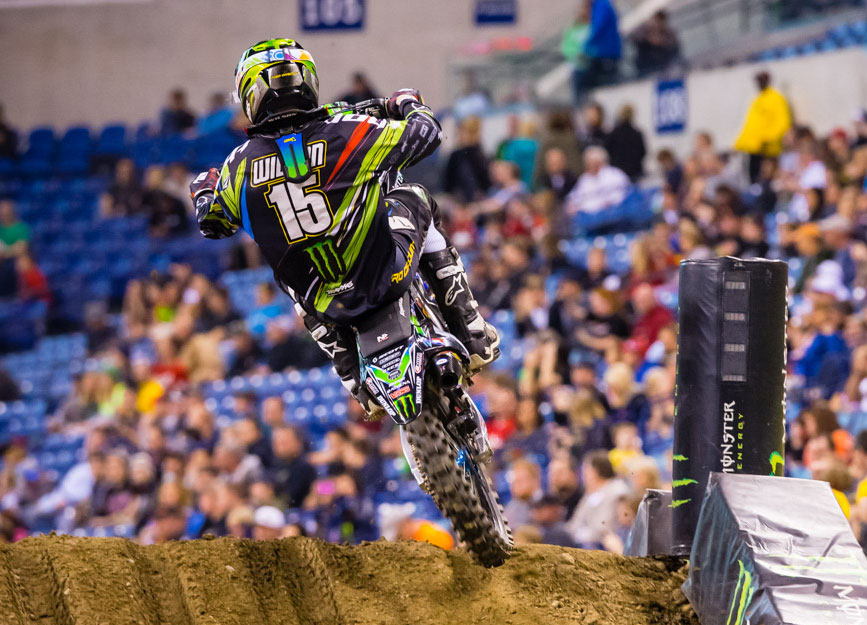 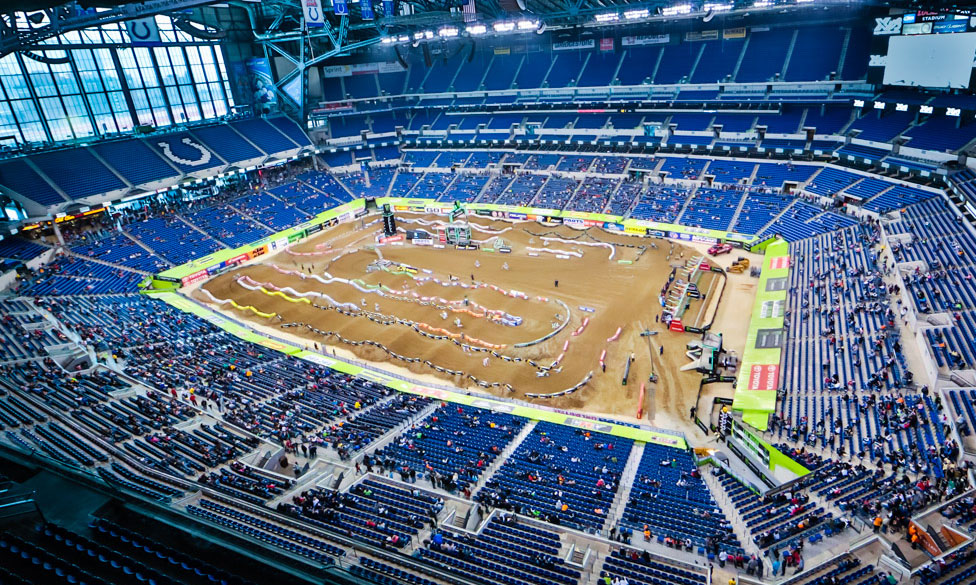