Freestone Raceway was the site of the second round of the Lucas Oil Pro Motocross Championship, sanctioned by AMA Pro Racing, on Saturday with an afternoon full of fiercely-contested competition. Team Yoshimura Suzuki’s James Stewart, of Haines City, Fla., narrowly swept the day’s motos to claim his second consecutive overall victory in the 450 Class. In the 250 Class, GEICO Honda’s Eli Tomac also recorded a pair of moto wins to grab his second career overall victory. 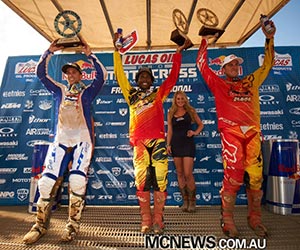 Stewart capitalized on strong starts in the 450 Class, working his way into the lead prior to the conclusion of the opening lap in each moto. Behind him, Red Bull KTM’s Dungey, of Belle Plaine, Minn., asserted himself in both motos, setting his sights on passing Stewart for the lead multiple times.

However, despite being faster than his rival throughout a significant portion of each moto, Dungey was unable to find a way to get past Stewart. The duo was separated by mere bike lengths throughout the combined 34 laps of racing across both motos, but the lead position never changed hands. Regardless, the two former champions provided captivating competition that kept the fans cheering all afternoon long.

“I thought my day went good,” said Stewart, who’s 18th-career win ties him for fourth on the all-time wins list. “It was a tough one, but fun. I got two good starts, made quick passes, and set the tone with a good pace. Ryan rode really well, but I did my own (thing) out front. I knew he’d be there the whole time. I felt like we were even today and if he had gotten out front, he could have done the same thing.”

“I got off to good starts in both motos,” said Dungey. “I tried to make a pass happen the whole moto, but there was maybe more I should have done. It just didn’t come together. James is a tough competitor and it’s good for the both of us to push each other to new limits.”

In the 250 Class, Tomac showed an unmatched pace in both motos. The recently-crowned AMA Supercross Western Regional Champion had not won a Lucas Oil Motocross race since his history-making professional debut during the 2010 season, but on Saturday, he was in a league of his own.

In Moto 1, Tomac was forced to work his way up from a fifth-place start, but he wasted little time in doing so, moving to the lead by Lap 3 and pulling away from the field by over 10 seconds. He put forth a similar effort in Moto 2, overcoming a sixth-place start to take over the top spot by Lap 7 and once again win by over 10 seconds to cap off a dominant afternoon.

“The last two seasons have been roller-coasters to say the least,” said Tomac. “I pretty much ruined my rookie season here (due to the heat), so to come back and get a win is just awesome. I’ve been doing this for three years and every year you learn the tracks and the bikes more, and I feel like everything is working perfectly now. I didn’t get greatest starts today, but I found some good lines and got a good flow all day.”

“I’m pumped to salvage out a second with poor starts,” said Baggett, who holds a 14-point lead in the championship. “The most important thing is I still have the red plate (for the series points lead). Hopefully I can keep it for the next 10 rounds.”

The 2012 Lucas Oil Pro Motocross Championship continues next week, with round three from Thunder Valley MX Park in Lakewood, Colo., and the Toyota Thunder Valley National on Saturday, June 2.