After winning the Nuclear Cowboyz® Holeshot, Monster Energy Kawasaki’s Jake Weimer, of Wildomar, Calif., held the lead position until being passed by Reed on Lap 6. Toyota/Yamaha/JGRMX’s James Stewart, of Haines City, Fla., made a pass on Weimer for second place, and during the pass, Weimer crashed, falling to 14th place.

Red Bull KTM’s Ryan Dungey, who won last weekend’s race in Phoenix, settled into fourth place behind Stewart. Dungey was able to capitalize on a crash by Stewart on Lap 12 as he took over the number three position.

Reed earned his 41st Supercross Class main event and third consecutive podium finish of the season. Dungey, who finished second, has also been on the podium at every race this season and now sits in the points lead. Stewart finished a season-best third place.

“I have been trying to figure out what I have been doing wrong this year,” said Reed. “I switched to a tire that I used last year and it worked. I am going to keep trying to get better each week. I will take the good with the bad and keep moving forward.”

Tomac’s win marked the third of his career, and he is now the Western Regional Supercross Lites Class points leader, one point ahead of Wilson.

“I was able to sneak into the lead and ride 15 solid laps,” said Tomac. “It’s a night and day difference when you get a good start. I should have been getting starts like this all season.”

TwoTwo Motorsports/Bel-Ray Racing’s Chad Reed has taken his first victory of the 2012 Monster Energy AMA Supercross, an FIM World Championship, at Round 3 of the series at Los Angeles’ Dodgers Stadium tonight.

The Australian, who crashed in his heat race and finished eighth, rebounded to take victory in the ‘Main Event’ three seconds ahead of Ryan Dungey and James Stewart.

The 20-lap final was marred by a red flag on the opening lap, after a horrific mid-air clash between fellow Honda rider Trey Canard and Ryan Morais.

Reed got away well on the race restart and was sitting third at the end of the opening lap. He moved into second on Lap 3 and took control of the race on Lap 5.

“It was awesome to bounce back after last weekends result,” Reed said. “Week after week we are learning from our mistakes and we are doing all we can to makes sure the momentum keeps moving forward.

“That first lap was scary stuff, it all happened right in front of me. You never like to see your fellow riders go down like that.

“Throughout practice and my heat race I wasn’t really feeling it with the bike,” Reed explained.

“I just couldn’t get into a good rhythm so for the main we actually took it a step backwards and used the same compound Dunlops we used last year, which in conjunction with the chassis changes gave me a good feel.

“The bike felt much better after the start of the main so we made a couple of small changes before the restart which made it even better,” Reed added.

With little time to reflect TwoTwo Motorsports will now prepare for next weekends event at Oakland’s O.com Coliseum.

Red Bull/KTM Factory rider Ryan Dungey picked up his third podium in three rounds with an impressive second place in the third round of the of the AMA Supercross Series at Dodger Stadium in Los Angeles. Dungey retains the red plate as points leader.

Dungey had a decent gate pick for the main event and got off to a flying start. He grabbed the holeshot and locked in battle for the lead with rival Ryan Villopoto. Shortly after the race was red flagged when Trey Canard and Ryan Morais crashed.

He then got away well in the restart, was fourth at the first corner and sat there for the first seven laps in a four-way battle with Jake Weimer, James Stewart and Chad Reed. He was able to move up to third after Weimer went down and then fought for second place with Stewart, who also crashed and handed Dungey his second place. He is the only rider to have been on the podium in in all three races so far this season and is now 4 points clear of Villopoto and Reed who are tied for second.

Ryan Dungey: “It feels great to hold the red number plate as we head into the fourth round. It’s still early in the series, but it is definitely off to a good start for the Red Bull/KTM Team. I can’t thank everybody on the team enough. They have put in so many hours and we have made so much progress on the new 450. The bike is running amazing.”

SX Lites
Although his night did not turn out as he expected, Red Bull/KTM Factory rider Marvin Musquin still put on an impressive performance in the SX Lites category and was the third fastest in practice and third in his heat.

He settled in well in the main event, quickly moving up from his seventh spot at the first corner. He had his sights on the lead group and looked in the running for another podium. With three laps to go, Musquin was within a bike length of the two riders battling out for second place when he landed too far to the outside of a triple. It planted his front wheel in a mud hole, brought his bike to a halt and pitched him over the handlebars. Marvin was uninjured but winded and was unable to complete the main event. Despite his DNF he was listed at nineteenth place in the results.

Marvin Musquin: “I had trouble breathing after the crash so I could not return to my bike.” Medical staff said he would be sore and bruised but would be able to ride next weekend. It was a better race outcome for Matt Moss of the JDR J-Star KTM team who finished in eighth in the Lites. 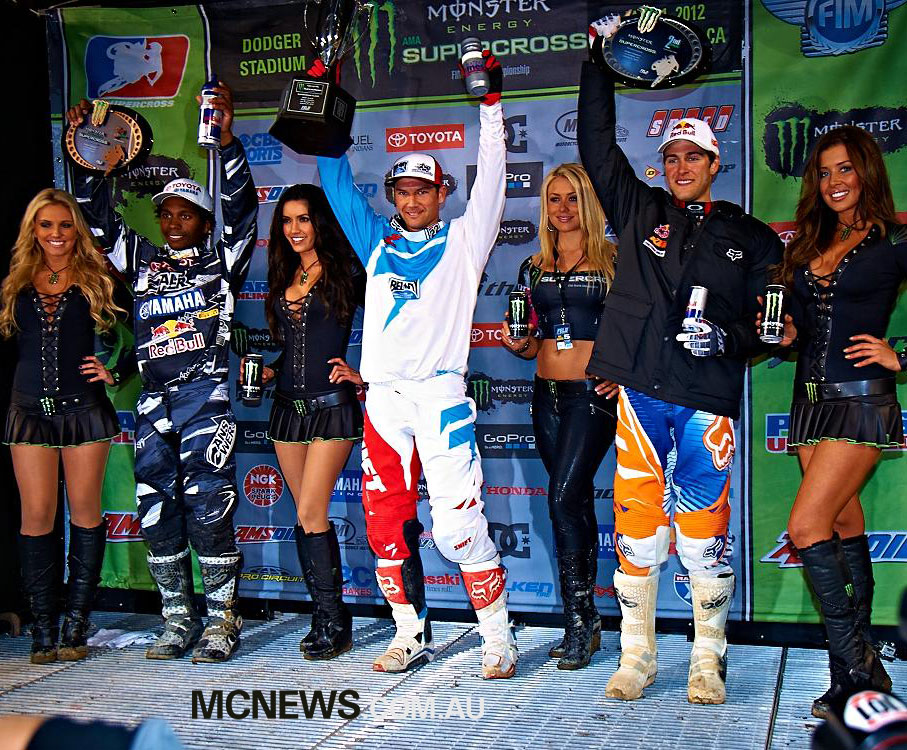