Team Suzuki star Wayne Maxwell has turned the race for the 2013 QBE ASBK Championship on its head after scoring two emphatic race victories in front of a healthy Saturday crowd at Sydney Motorsport Park.

Starting from third on the grid for both round 4 races Maxwell led the first race from the start blasting the PTR prepared Team Suzuki off the line and leading the field through turn one. Maxwell always seemed to have a few bike lengths 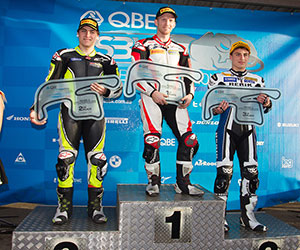 buffer over team mate Robbie Bugden but by the completion of lap four the margin had been reduced to a scant 0.190 of a second.

Pole sitter Glenn Allerton on the Next Gen Motorsport BMW HP4 was a close third for the early laps but as Bugden closed in on his team mate, Allerton was trying to regain composure after a few “moments” that saw the gap to the race leader out to over one second. Maxwell continued to build a lead over Bugden tenth by tenth until the lead crept out to the psychological one second barrier by lap eight.

By this stage Team Honda rider, and dual ASBK Champ, Jamie Stauffer was a further 3 seconds back in fourth but being closed down by the fast learning superbike rookie Glenn Scott.

Scott has caught and passed Josh Hook’s Team Honda machine on lap six and continued to eke out valuable tenths of a second on each lap to eventually be in a position to challenge Stauffer over the last three laps.

Scott showed Jamie a wheel and from there to the finish the still injured team Honda rider utilised his many years of experience to hold off the fast learning former 125GP Champ to secure fourth place with Scott fifth and Hook sixth.

Linden Magee nursing multiple broken ribs was the next rider home in seventh on his Next Gen Motorsport BMW, just getting the better of Chas Hern on the CM Racing Suzuki by over a tenth of a second. The two seemingly attached by an invisible, and very short, bungee cord for the entire race distance never 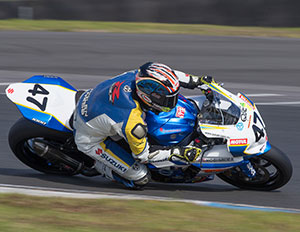 more than a tenth or two apart..

NZ SBK front runner Sloan Frost was the next home in ninth, just ahead of Beau Beaton who had spent the entire race recovering from a hectic first lap. Ben Henry DNF’d after an issue on the third lap resulted in him bring the Australian Outdoor Living Cube Racing Suzuki back to pit lane.

Maxwell eventually took the win by over four seconds with Allerton just over 3 seconds behind Bugden in third.

“That was full GSX-R power that got me off the line and down to turn one so I was pretty stoked” beamed race winner Maxwell. “I didn’t get away from them in the first handful of laps there and I just kept going and the gap started to increase, I was just concentrating on keeping my rhythm and I just want to say a big thanks to all the guys at Team Suzuki”

“I was feeling pretty comfortable behind Wayne early on in about the first half of the race” commented second placed Bugden. “ I was just going to sit there and let him do the work but he got faster and faster and was stronger than I was towards the end of the race”.

“its not where I wanted to finish” said third placed Allerton. “Obviously you can’t win them all and that’s racing. I didn’t get the best of starts but I gave it everything I had and just got beaten on the day”.
Race two was a much more exciting affair with Allerton, Maxwell and Bugden making a break early, Allerton and Bugden both lead at stages with the three covered by less than half a second until Allerton went down at Turn six on lap nine, asking too much on the front end on the HP4. By this stage Stauffer was over two seconds back in a safe third place with Hook and Scott a safe distance behind to ensure Jamie scored his, first podium of the year.

The highlights of race one had to be Bugden’s heart-in-mouth move into turn one on the last lap along with Maxwell’s equally audacious assault at the old turn 9 hairpin, a move that had to be seen to be appreciated fully.

Once again Magee and Hern did battle but this time Beau Beaton and the Racers Edge Performance Suzuki were in the mix as well up until the dying laps when Magee and Hern got away a little. 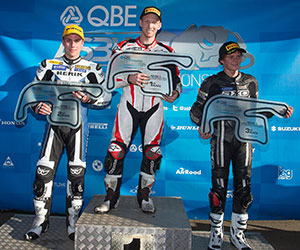 I am ecstatic to win my first round at Team Suzuki” explained Maxwell. “It’s like a dream come true, they gave me a lifeline when I had nothing and have treated me like one of their own. The bike is working extremely well and full credit to Team Suzuki and Dunlop. We had our backs to the wall at the beginning of the year but they have listed to the feedback and here we are at round four with a victory, let’s see what round 5 brings tomorrow.

“Overall it’s been a real positive day for the whole team” commented second placed Robbie Bugden. “Finishing one-two the Dunlop tyres were also working real well and that shows with an all Dunlop podium in race two. I would have thought he (Maxwell) would have been a bit easier on me but that was some good close racing, we touched a couple of times but we both wanted it, wanted it real bad and that’s why we are up the front at the moment”.

“In the first race I really struggled with a few things on the bike and even though we were fourth we were struggling and they were a long way in front” explained Jamie Stauffer after claiming third overall. “ We made a lot of changes for the second race and that fixed the bike up a lot, even though theoretically we should have still come fourth as Glenn crashed but we got third and we were a lot closer to the front so we have moved forward”.

Race one did not go to plan for us” said fourth placed Josh Hook. “We got a bit lost in th race a bot but we came back had a good look where we were and came up with a new setting for race two and it worked a lot better. At the start of the race I felt like I could go with those guys but in the latter stages we just lost a bit of grip but we are working on that now to see if we can make it better for tomorrow”.

Undoubtedly one of the stars of the meeting would have to be Glenn Scott, leading privateer, fifth in both races and tied for points for the round with Josh Hook “The first race was really exciting, we had a great start but in all honesty the nerves got the better of me and I made a few silly mistakes, but once the nerves settled and I found my feet I started to move forward. When I got on the back of Hooky I found that I was faster than him in s few places so I had a big dive at turn one which was pretty close”.

Magee, Hern and Beaton crossed the line in the that order for positions six, seven and eight but Hern was promoted to sixth as the Clerk of the Course penalised Magee for overtaking under yellow flags at turn two, Magee was set to appeal the decision so watch this space.

Sloan Frost and Ben Henry rounded out the top ten with Allerton limping home with no brakes to finish Thirteenth.

“I had a little crash at turn six just trying to make up a bit of time” said a still bemused Allerton. “Still, we have to take the positive out of race, there was no mechanical issue, I just got in there a little hotter than normal and asked for a little I too much and sometimes you fall off when you do that, it happens. I am just happy I got the bike going and scored some points. We have two more races tomorrow to try and make it right, the boys are working on the bike now so I think we’ll be OK”.

Maxwell now leads the championship by nine points over Allerton, 130 to 121 with last round victor Robbie Bugden a further two points back on 119.

In the Supersport class Aaron Morris took a fourth place in race one and a commanding victory in race two to tie with Championship leader Daniel Falzon with a mirror image of results with a win and fourth place, the Novocastrian getting the round victory courtesy of his higher result in race two. Both Supersport races were exciting affairs with anyone of the riders on the first two rows of the grid capable of taking the victory, in the end the first race went to Falzon who led home Michael Blair and Ryan Taylor, Aaron Morris and Callum Spriggs rounding out the top five. Aiden Wagner was forced to retire from a strong second place while closing down on Falzon when the bolt holding his gear shift came loose forcing him to retire.

Morris brained the field at the start of race two and led by over two seconds after the first lap, Aaron Gobert got a blinding start from row three and held second place for a lap before a Falzon and then a freight train of riders pushed their way past the most experienced rider in the field. Taylor crashed out at turn three on lap nine to make the chasing pack one of four. In the end Morris took a 3.8 second victory over Wagner, Spriggs, Falzon and last round double race winner Michael Blair rounding out the top five.

The Prostock category was dominated by Kawasaki Connection / Rover Coaches Ninja ZX-10R pilot Matty Walters who dominated each race from pole position, throw in a new lap record and it was the perfect weekend for the hard charger from Cessnock. Dustin Goldsmith overcame electrical issues that turned his ZX-10R into a bucking bronco to secure Second overall with 3-3-3 results, tied on points for the round with Sean Condon who carded 2-2-7 finishes.

Phil Lovett had bikes issues that prevented him from finishing legs one and two but bounced back with a strong second place in the final leg, watch out for the living legend of motorcycle racing tomorrow.
Walters now leads the championship by a whopping 68 points over Goldsmith and Ben Nicholson who bravely soldered on this weekend with two broken bones in his wrist.

In the Moto3/125GP class Lawson Walters and his awesome KTM Moto3 dominated the three races, Lachlan Kavney and Tayla Relph rounded out the top three despite Relph crashing in race 3 and causing a red flag.
Relph was slightly injured in the crash, her Honda Moto3 was not so lucky suffering serious frame damage. Tomorrow she will be riding Lawson Walters’s spare Honda chassis with her engine.

Luke Burgess won a controversial 250 Production round from Tom Bramich and Brandon Demmery. Burgess won races one and two but crashed early in race three at turn four. After dropping back as far as eleventh he then surged back through the field to claim sixth, enough points for the round victory by four points. Demmery went on the win the third race on the road, but along with four other competitors was slugged with a ten second jump start penalty.

Bramich and Demmery tied on points after Demmery was demoted to second with Bramich being awarded the final race victory on his Ron Angel Racing Ninja 250.