The Team Honda rider made up 11 points on Waters, collecting the 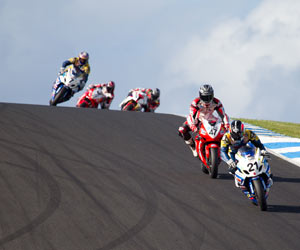 maximum haul available from round 6 and increasing the intensity in his race for a maiden ASBK championship.

Despite starting from pole Maxwell didn’t have it all his own way, and it was Team Suzuki’s Ben Attard who blasted off the line to lead both of today’s races.

Attard relinquished the lead to teammate Waters on both occasions, and faced further setback as he was penalised for a jump start in race 2.

Behind them, Maxwell was chipping away at the riders in front and proved too quick and consistent for their defence in the latter stages.

He made his move on race 1 leader Josh Waters in the closing laps, taking the win by 1.7 seconds.

He crossed the line with a similar advantage in the second race which had previously been reduced by 2 laps due to a red flag incident.

Maxwell has notched up 6 wins to date in 2012, with 5 of them coming at Phillip Island, including two clean sweeps.

“The weekend couldn’t have gone any better, not only to get the clean sweep and 51 points, but to be able to set the fastest lap on the last lap of race 1 is a credit to the team and the way they have setup the Honda to use its tyres,” said Maxwell.

“The team have been putting in so much work to pull back these points and now we’ll head to the final round to make one last push for the title.

“It’s going to be a very tough ask but we’ll give it our best shot.”

Waters was strong today but decided discretion was the better part of valour as Maxwell applied the blowtorch.

“Once I got a gap over third I just did what I needed to do, Wayne was too strong in those last few laps and to come away with two second places isn’t too bad,” said Waters.

“I knew I’d have to be riding at 110% to beat him and now I have to go back to Queensland Raceway and just try to bring it home.

“It’s been wet there in races and we’ve had two rained out tests so who knows what we’ll be up against – hopefully it’s a dry weekend and we can get a lot of fans out there to watch the title get decided.” 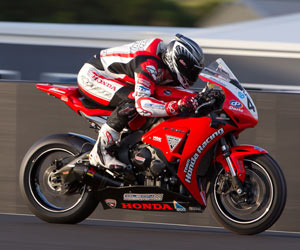 He will head to the final round needing to protect an advantage of 19.5 points to secure his second Australian Superbike Championship title.

Team Honda’s Jamie Stauffer completed a carbon copy of race 1 and 2 podium results with a pair of third places.

The two-time Champion admitted he didn’t have the pace displayed by the leaders today and was content to come away with two consistent finishes.

“Wayne and Josh always do well here and they pretty much broke away in the last few laps to leave me with two third places,” said Stauffer.

“I had a good battle with Glenn this afternoon and managed to get back by him which was important for our points.

“Queensland Raceway seems to be the track I do the best at so hopefully we can go there and get back on the top step of the podium.”

While he remains a theoretical title chance, Stauffer’s focus will be on holding off Procon Maxima BMW’s Glenn Allerton who he heads by just 2.5 points.

Allerton finished fourth in both of today’s races to record fourth overall for the round. He also holds down fourth on the standings and will be looking to finish a challenging season on a high next month.

Nicholas Waters and Linden Magee shared today’s Prostock wins, with both riders again factoring in the top 10 of the 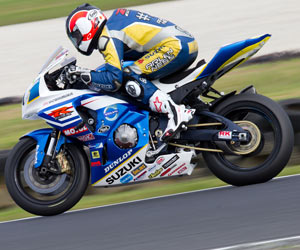 Chas Hern delivered two podium finishes to maintain his lead of the class and will settle a season-long battle with Magee at Queensland Raceway.

Three riders waged war in a close battle for the win in both races.

0.131s was the greatest margin separating the top 3 riders at race end, with Team Honda’s Josh Hook taking third and second and Carr second and third.

Hook took second overall for the round by virtue of a higher place in the second race, and is only 4.5 points shy of the lead with a round still to run. 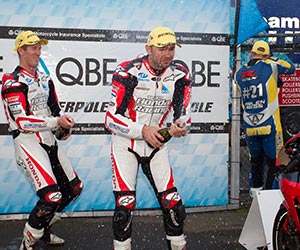 Success again for Team Honda Racing! Wayne Maxwell took full round honours today at Phillip Island for the 6th round of the Australian Superbike Championship with Pole position, 2 race wins and the fastest lap of the day in Race 1; a time of 1:33.666 sec on the very last lap.

Team Honda Racing has now won 4 Rounds in succession between Maxwell and Stauffer proving the dominance of both the team and the Honda CBR1000RR12.

The weekend began with extremely unsettled weather for qualifying yesterday, resulting in Superpole being cancelled and grid positions being decided by combined session times. 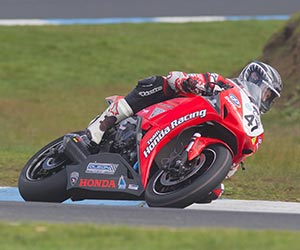 Team Honda Racing qualified very well; not only with Maxwell’s pole position, but team mate Jamie Stauffer also placed on the front row in the Superbike category after he qualified in P3 on the grid.

Today brought dry conditions and both Superbike races today saw the Team Honda Racing CBR1000RR’s doing battle for the lead, however it was Maxwell who would ultimately take the victory, with Stauffer finishing a solid 3rd place in both races, taking 3rd place overall for the event. Having accrued valuable points this weekend Stauffer remains in 3rd place in the championship going into the final round with 200.5 points.

Stauffer: “It was a pretty good day we qualified 3rd and in the 1st race we got a good start to take the lead, but I couldn’t hold that pace with the bike moving around a bit too much and I slipped back to 3rd. We made a change for the 2nd race and it was definitely better, but I got stuck behind other riders and it took too many laps to get by them and when I finally did the race was pretty much done and I came 3rd. I’m looking forward to Queensland Raceway which is a track I have been extremely successful on in the past. I will be looking to finish the season strongly and take maximum points.”

Maxwell is eager to put in a final challenge for the championship title in a month’s time at Queensland Raceway after his 51 point haul at Round 6.

Maxwell: “The fairytale continues for me at Phillip Island with Pole and 2 race wins and I couldn’t be happier. Team Honda Racing gave me an awesome package this weekend. I haven’t been feeling 100% and it has made it a bit difficult to make strong decisions in terms of bike settings, but the team made it all happen and gave me a brilliant CBR1000RR package to be able to take the overall for Round 6. I would like to thank the team for their hard work and support. Bring on the final round at Queensland Raceway next month where it will be one final big push for the championship title and I’ll be there giving it 110%.”

In the Supersport Category, Josh Hook fought a valiant battle for the top spot in both races, with the top 3 riders crossing the line within tenths of a second in both instances. Hook recorded the fastest lap of Race 1, a 1:37.611 sec on the final lap and came 3rd. Race 2 provided an equally enthralling battle, and Hook crossed the line in 2nd place. 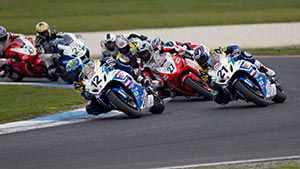 Hook: “It was an awesome day’s racing! For the 3 of us to finish that close in both races, it was great fun. To be battling throughout the race with 2 other riders and have it come down to the line is what it’s all about. In Race 1 I was struggling for a little bit of grip and the team made some changes to my bike between races which really helped in Race 2 and I felt much more comfortable in the race. Full credit to the team for the choices they made. Going into the final round there is only a few points between the 3 of us so it will be a pretty tough battle which I am really looking forward to.”

Team Honda Racing was pleased to have the company of one our sponsors, the owner of Portable Shade, Brad Anassis from South Africa, for the weekend’s activities amongst other sponsors and their guests (Oleon, AWS, BOQ and Honda Motorcycle Insurances) on Race day. The team is looking forward to the final round of the championship at Queensland Raceway as they strive for the 2012 Superbike and Supersport Championships. We hope to see you there in September!