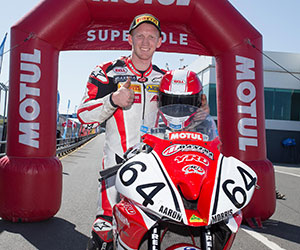 CAT Yamaha rider Daniel Falzon took the title in the Motul Supersport class, capping off an incredible debut year for the 19 year old, in which he finished on the podium at every round.

“It is a great feeling to get my first Superbike title,” Maxwell said. “It is also really rewarding to finish the championship with a podium results.

“I always knew I could win, it was a matter of everything falling into place. Roll on 2014.

Allerton’s round win saw him surpass Team Volvo Suzuki’s Robbie Bugden in the championship standings to take the runner-up spot.

“It was very satisfying to end the year with such a good results,” Allerton said. “I finished second in Race 1 but it was as good as a win, it was that close between Wayne and I. 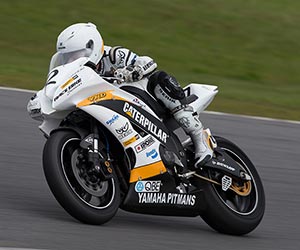 with slicks. Once I got past the guys on the wets it was about managing the gap.

“While we had hoped to finish one better in the championship it is still a great achievement for our team as we are not a factory team,” Allerton added.

In the Motul Supersport class Daniel Falzon came into the round with a 20-point lead. The South Australian faced stiff opposition from NSW rider Aaron Morris, who won both of tody’s 12 lap races and took the round win.

Falzon finished the round third and seven points ahead of Morris in the championship standings.

“The Motul Supersport Championship has proven to be one of the most the most difficult series I have ever raced in,” Falzon said.

“I can’t believe we have come out on top after so much hard work. We stayed consistent all year and I was the only rider to finish on the podium at every round.

“It was the consistency that won it for us and I was also extremely lucky to have such an awesome team behind me,” Falzon continued.

While Matt Walters secured the Honda Prostock Championship at the previous 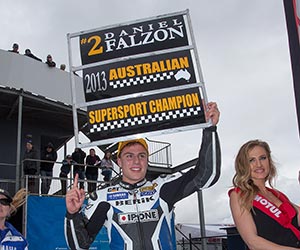 round the battle for second went down to the wire. NextGen Motorsports Ben Nicholson finished the series in the runner-up spot but it was Sean Condon who came away with the round win today. 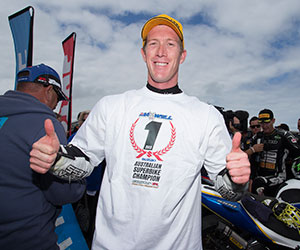 The cards continued to fall into place for Team Suzuki’s Wayne Maxwell, who 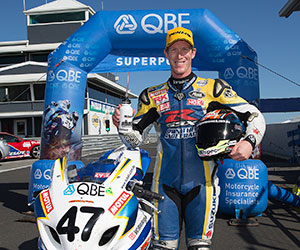 is just two races away from taking his first ever QBE Australian Superbike Championship title.

Maxwell’s domination of the Superbike class continued today with the Victorian rider storming to Superpole victory with a new best lap of 1.32.274

“I couldn’t be happier,” Maxwell said. “To take my second pole position and set a new best lap in these conditions, with the wind blowing at 30km per hour, is a big achievement.

“The GSX-R worked really well today and Dunlop gave me a great tyre at such a difficult track.

“There are still two races to get through tomorrow, but we gained another point with today’s Superpole win,” he continued.

“It does feel great to get Superpole in the bag today,” Morris said. “We had a technical issue in Darwin and missed out, but we made up for it today and it is my first Superpole win of the year.

“My goal for tomorrow is to go out and win both races. For me to take the title Daniel really has to make a mistake so I will just go out and do what I can and see what happens from there.”

The final round of the 2013 QBE Australian Superbike Championship will conclude at Phillip Island Grand Prix Circuit tomorrow.