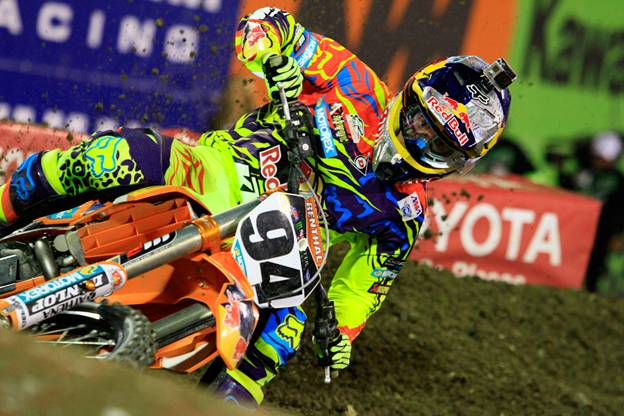 On Lap 12, Stewart passed Reed for second place and chipped away at Roczen’s lead, ultimately closing in on his rear wheel. While attempting to get alongside Roczen in the whoops, Stewart suffered a race-ending crash. On Lap 16, Dungey secured second place as he passed Reed.

“This is insane,” said Roczen. “I got off to a good start and was holding on really tight. When there were four laps to go, I realized that I could win.”

Roczen was joined on the podium by Dungey, giving KTM a 1-2 sweep, and Reed. Villopoto recovered to finish fourth.

Anderson grabbed the Nuclear Cowboyz Holeshot Award and held down the lead in the 250SX Class Main Event until Lap 4 when Troy Lee Designs/Lucas Oil Honda’s Cole Seely moved into the lead. On the same lap, Monster Energy/Pro Circuit/Kawasaki’s Dean Wilson moved into the third spot.

Wilson and GEICO Honda’s Zach Osborne traded places near the halfway point of the race and the duel did not stop, lasting several subsequent laps. In the second-to-last turn on the last lap, Anderson passed Seely and rode to the second win of his career.

“The pass was [risky] on Cole (Seely),” said Anderson. “I didn’t want to be dirty but I had to put it in there, and I am glad it worked. I look forward to riding into Phoenix with the red number-one plate. This is only my second career win, so it is big for me.”

Anderson and Seely were joined Osborne on the podium, who eventually made his way past Wilson on Lap 12.

The US Red Bull KTM Factory Racing Team launched their 2014 AMA Supercross season with flair on Saturday night in the Angel Stadium with a 1-2 in the opening round of the 450 class competition thanks to rookie Ken Roczen of Germany and American teammate Ryan Dungey.

A win in the 250 class West Coast Championship by Rockstar Energy KTM’s Jason Anderson rwound up a near perfect night for KTM.

But the spotlight was firmly on Roczen in his debut race in the senior class and the German rider did not disappoint. Fresh from off season training in Florida, Roczen was right up with reigning champ Ryan Villopoto when the gate dropped for the main event. Villopoto took the holeshot but Roczen was in a solid second. Roczen was still hanging onto Villopoto five laps into the race while Chad Reed was in third. Red Bull KTM’s Ryan Dungey then moved from fifth to fourth to put himself into podium contention.

The race took a dramatic turn in lap nine when Villopoto crashed out and dropped back to sixth while Roczen steamed into a two-second lead. As the race progressed Stewart looked a strong challenger to Roczen after he had closed down into second place. Behind them Reed and Dungey were duking it out for third place.

Stewart leveled with Roczen in the whoops section then suddenly found himself on the ground leaving Roczen with the win, teammate Dungey in second and Reed picking up the final podium spot.

A stunned Roczen said: “I literally can’t believe it. It was such a good race. I was holding on so tight. I wasn’t even tired. I got a good start and I just stayed focused. I’ve been working very hard during the off-season and I am so glad the hard work has paid off. Congrats to my teammate, Ryan Dungey, it is great to share this moment on the podium with him.”

Second placed Dungey said it was cool to have the KTMs 1-2 in Anaheim, adding that his younger teammate was “definitely going to be a competitor this year.”

Anderson was fast out of the gates and took the holeshot and held off Cole Seely, Malcolm Swewart and Dean Wilson in the opening lap. Seely managed to get past Anderson in lap four right after the rhythm section and the two riders started to put distance between them and the others. Then with two laps to go, Stewart clipped a downed rider and dropped back to finish in eighth place.

Anderson pulled off a great move near the end of his final, converting what looked like a second place finish into a win when Seely got caught up in traffic with just a couple of corners to go. Anderson was poised to take advantage of Seely being held up and steamed past in the final turn to put the KTM on the top step and give the fans in the Angel stadium a thrilling finish.

“I saw the pass might be available and I just had to push really hard in the last lap,” Anderson said, adding he was pumped to have put his Rockstar Energy KTM on top.