Fenati says he will retire

“On 11 September 2018 the Federal Tribunal of the IMF met to examine the request for precautionary measures against Romano Fenati presented by the Federal Prosecutor Antonio De Girolamo.

“At the expense of Romano Fenati (vice president of the Italian Motorcycling Academy Motorcycle Club, IMF card holder and in possession of an IMF Elite license), the violation of article 1.2 of the Justice Rules is contested in relation to the incident occurred on 9 September 2018 during the Race of the Moto 2 World Championship of the San Marino and Rimini Riviera Grand Prix against the competitor Stefano Manzi.

“Given the seriousness of the facts, the request of the Federal Prosecutor has been fully accepted and the Federal Court has therefore ordered for Romano Fenati the suspension of any sporting and federal activity with consequent withdrawal of the card and speed license, also fixing the hearing of the same – who has the right to be assisted by a lawyer – for 14 September 2018.”

Romano Fenati has faced widespread condemnation after grabbing the brake lever of a fellow rider at high speeds at the Misano Grand Prix, and was sanctioned with suspensions for two Grand Prix as a result. 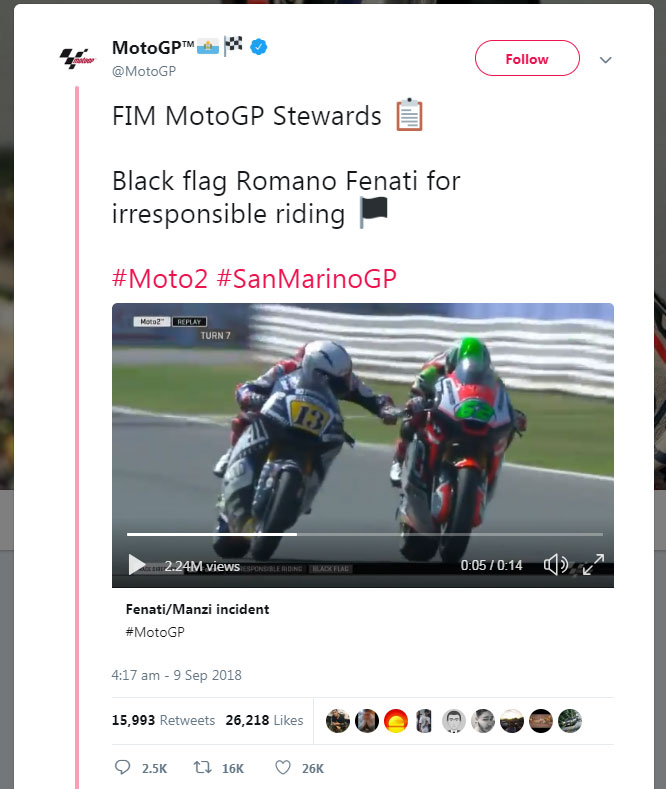 “I apologise to the world of sport. This morning, with a lucid mind, I wish it had just been a bad dream. I think about and think back to those moments, I made a disgraceful gesture, I was not a man! A man would have finished the race and then he would have gone to Race Direction to try and get some justice for the preceding incident. I shouldn’t have reacted to provocation. The criticisms are correct and I understand the animosity towards me. I want to apologise to everyone who believed in me and all those who felt hurt by my action. A horrible image of me and of the sport has come out. I’m not like that, people who know me well know that! In my career, I’ve always been a just rider. Last year I was one of the few who was not penalised, I have never put someone else’s life in jeopardy, on the contrary, I have always maintained that there are riders on the track who are dangeous because of their riding style. It’s true, unfortunately I have an impulsive character, but my intention was certainly not to hurt a rider like me rather I wanted to make him understand that what he was doing was dangerous and how I could also have done something similar to what he did to me! I do not want to justify myself, I know that my actions were not justifiable, I just want to apologise to everyone. Now I will have time to reflect and clear my head.”

“The serious misconduct by Romano Fenati towards Stefano Manzi during the Moto2 race during the Gran Premio di San Marino e della Riviera di Rimini which took place at the Circuito Marco Simoncelli in Misano Adriatico will have repercussions for the future, beyond the black flag shown to Fenati, and the two-race ban imposed by Race Direction.

“MV Agusta will not be represented by Fenati in 2019, the year which will see the return of the Varese factory to the highest level of motorcycle racing, and the Moto2 World Championship. The agreement between MV Agusta Reparto Corse Forward Racing Team and Romano Fenati has been terminated.”

“In all my years of watching sport, I have never seen behaviour as dangerous as this. A rider who can act like this can never represent the values of our company for our brand. For this reason, we do not want him to be the rider with which MV Agusta makes its return to the World Championship.”

“After the disgraceful episode between Romano Fenati and Stefano Manzi, it is impossible for the team to maintain its planned collaboration with the rider from Ascoli for the 2019 season. Fenati’s behaviour is incompatible with the sporting values of the Forward Racing Team and of MV Agusta. For this reason, though we bitterly regret it, we are forced to cancel our project with Fenati. Our sport is already extremely dangerous, and any act which increases the risks involved for the riders is intolerable. We cannot accept behaviour of this type from one of our future riders.”

Ton-Up Garage goes back to the future with XSR700

ASBK to run with V8 Supercars, Nitro drags and Super Trucks in Darwin

Repsol Honda confirm that Marc Marquez will not race until 2021