The fifth round of the Australasian Superbike Championship moved back north to Queensland Raceway over the weekend where the SA Kawasaki BCperformance team previously enjoyed success in round three in July.

Friday’s hot and humid conditions saw the SA Kawasaki BCperformance Superbike riders get down to business straight away building speed throughout the four practice sessions and finishing the sole qualifying session with Robbie Bugden posting the fastest time, Ben Burke joining him on the front row of the grid in third. Giving them ideal starting positions for Saturdays AFX-Superbike championship races.

Kyle Buckley was flying solo in the Supersport ranks for the SA Kawasaki BCperformance team after a high speed testing crash the week before resulted in some broken bones including a femur and pelvis for team mate Ryan Masri, who will be laid up in hospital for a while. The whole SA Kawasaki BCperformance team sent Ryan there best wishes for a speedy recovery and look forward to ‘the masman’ getting back up on his feet real soon.

Supersport qualifying went to plan for Kyle as he placed his Kawasaki Ninja ZX-6R at the top of the times early in the session and was never bettered.

Ninja 300 cup duo of Jimmy Broadbent and Yanni Shaw was joined by another guest appearance for the weekend, this time former Ninja 300 cup rider Phil Burke made his first appearance since 2014 on the Kawasaki Ninja 300’s. The trio qualified in 8th, 7th and 11th respectively with it all to play for in the weekends 6 races. SA’s

Evan Byles also came out the starting blocks firing on all cylinders in Formula Oz and placed his Ninja ZX-10R heading the second row in 5th place, without any prior testing this was also a good start to Evan’s weekend.

The Hip Pocket workwear AFX-Superbike Saturday races saw the hot and humid conditions carry over from the previous day, giving the SA Kawasaki BCperformance team a challenge to work with machine settings as the track surface was reaching temperatures in the 50’s. Nevertheless Superbike duo Robbie and Ben worked with their respective crews to find the optimum setup with the Kawasaki Ninja ZX-10R’s with Robbie carrying on his form from Sydney with 2-1-1 results, and Ben regaining confidence to claim 6-2-4 finishes. 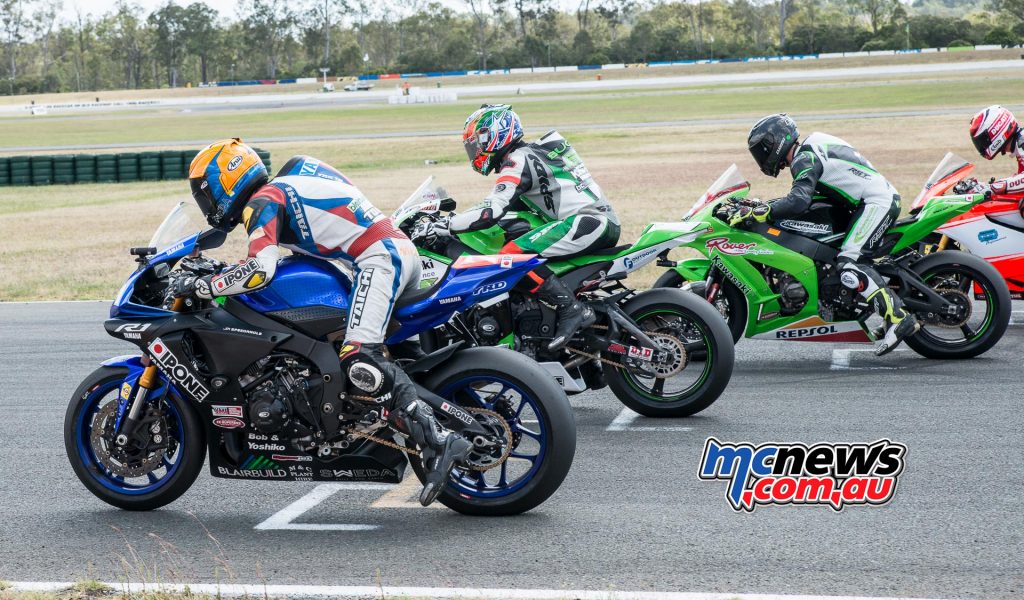 Supersport pilot Kyle brought his Ninja ZX-6R home in 2nd in the opener and after battling through from a bad start had a spectacular crash exiting turn 2 in his second outing before bouncing back to 4th from the rear if the grid in the final race of the day. The DNF dropped him down to 7th overall meaning a second row start for Sunday’s Supersport bouts.

Another hot and humid day greeted the team on arrival to the Queensland raceway circuit on Sunday morning. Superbike riders Robbie Bugden and Ben Burke where both prepared for a tough day in the seats of their Kawasaki Ninja ZX-10R’s.

Robbie again showed his dominance with another hatrick of wins in front of his crowd by winning all three races virtually unchallenged and extending his championship lead to 79 points.

Ben Burke had a less successful day; finishing third in the first outing was to be his only result of the day after a clash involving rival Michael Blair caused them both to end up in the gravel, Ben unfortunately coming off worst with broken bones in both wrists, missing the final race of the day also. Ben now lies third in the championship hunt, 87 points adrift from Robbie.

Supersport teamster Kyle Buckley rode to a lonely 2nd behind Callum Spriggs in the opener after Mitch Levy’s bike expired on the start line but re-ignited his yearlong battle with Mitch in the second outing, to be just pipped by both Levy and Spriggs in a thriller of a race to finish 3rd. Race three was much the same and Kyle brought his Ninja ZX-6R over the line in 2nd. 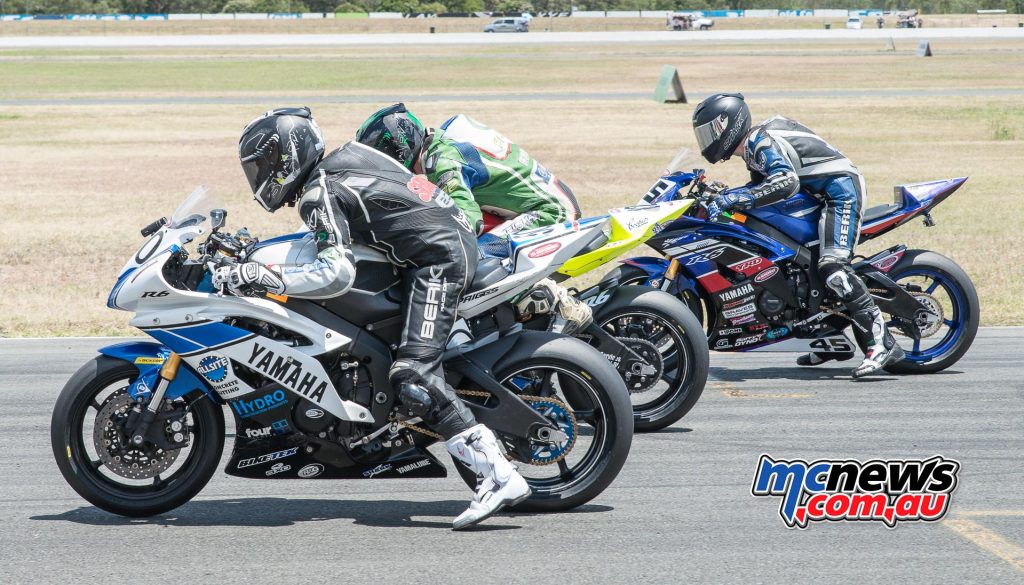 Kyle now leads the Supersport championship by 16 points going into the final round in Sydney.

After a difficult weekend getting to grips with the paperclip – as Queensland Raceway is affectionately known – Jimmy Broadbent had a consistent day with 6-7-6 keeping well within reach of the championship, just 14 points behind. Yanni Shaw also put in a consistent day with 8-9-9 results consolidating his 7th in the series. Guest rider Phil Burke got back up to speed after taking most of the past 18 months off to claim a commendable result of 11-10-11. Kawasaki Ninja ZX-10R mounted Evan Byles rode with speed and aggression to claim 8-5-4 results in a tight Formula OZ field, Evan sits comfortably in 2nd for his championship honour’s.

After a weekend of ups and downs the SA Kawasaki BCperformance team are keen to move onto Sydney Motorsport Park on 16th-17th December where double points are up for grabs and making it all to play for, and to give one final push to claim the Superbike, Supersport, Ninja 300 and Formulo OZ crowns.

“A great weekend with my SA Kawasaki BCperformance team we dominated the weekend to get 5 out of 6 wins and pole position. To have a weekend like that at my home round is nothing short of a dream result. The Ninja ZX-10R was a beautiful bike straight out of the truck and as per normal, the team didn’t put a foot wrong and we came away with a great result and setting ourselves up for a real shot at taking the championship at the last round at Sydney Motorsport Park. Massive shout out to all my team for giving me a great bike every time I throw my leg on the Ninja ZX-10R.”

“Had a good weekend at QLD. The races were tight but Robbie had the edge on us. I was looking forward to Sundays races as I could do the fast times but struggled in the opening laps. I knew improvement could be made in this area. In the second race I was happy with my first lap but unfortunately got tangled up in someone else’s crash. Without the crash the weekend was a success. Thanks for the hard work from Kelvin, Adam and the rest of the team and am sorry I could not make it out in the last race. I look to be fully healed for the last round at Sydney.”

“I really had a fun weekend on the Kawasaki Ninja ZX-10R at Queensland Raceway. The bike only needed the slightest of adjustments all weekend and the Dunlop tyres kept sticking all weekend. A big thank you to the team and my sponsors Swann Insurance, Shark Helmets and Cath Byles. Also a big thank you to Kirsty Byles my awesome Race Mechanic for all the perfect work and support. I am looking forward to the Adelaide 3 Hour at Mallala on the 20th of November when Davo Johnson joins me on the Team once again.”

“Round 5 got off to a good start with qualifying; put it on pole for Saturday racing. On Saturday managed to get in a rhythm and started battling for the race win when I had a pretty decent crash on the exit of turn 2. That put us on the back foot and the back of the grid on Sunday but we managed to turn things around and come away with a good result. Now sitting in a good position heading into the last round. Mega effort from the team, the bike was FD every session and was capable of being at the front. Looking to do the same in Sydney.”

“Had a different weekend… race one was really uncomfortable with the bed setup struggled to watch all race constant pain. The bed was cooked required a rebuild. After a bed change and a few rebound adjustments race 2 was a lot more comfortable and cheered on happily. Unfortunate to miss race 3 as the nurse decided it was time to load me up with some drugs and was out of it. Overall it was a good weekend considering the circumstances. Big thanks to the team and bring on the spectator seat for the last round.”

“Had a fun weekend, kept it shiny side up and im gonna take the positives and new lessons learnt into the last round in Sydney. With a 3 way fight for the biggest prize in Australian motorcycle racing coming up at the next round being on my A game is essential. Coming out all guns blazing is key and I can’t wait for the challenge. Thanks to the team and all the sponsors for all their support in Queensland and can’t wait for the final round on December!”

“Had a good weekend at the paperclip. I was able to fine tune my riding and most of all find the confidence I had been lacking the last couple of rounds. I want to make a special mention to Phil Burke, the old timer can still ride that’s for sure. But he took me under his wing and i improved massively. Looking forward to racing in December at the Creek. Great effort from all members of the team this weekend including Ryan Masri who is staying strong. Hope to see you on the bike soon.”