What a hoon machine!

Immediately after pulling out of the Witch Cycles driveway aboard the biggest of the Bandit range I fed some throttle in and was greeted by the front wheel promptly leaving the deck. Three gears later it came back down. Yee-ha.

Of course the front wheel of the Suzuki is kept on the deck quite easily when not being quite so eager with the throttle.

We covered around 650 kilometres aboard the 1200 Bandit and enjoyed every one of them.

The Bandit is quite an affordable option in today’s bike market as it retails for only $11,800.

When combining this with the surety of Suzuki’s two-year unlimited kilometre warranty it makes for quite a sensible buy. Not that the tried and true mechanicals of the Bandit should ever cause any problems.

A GSX-R 1100 derived 4-cylinder engine of 1,157-cc capacity supplies plenty of relaxed grunt everywhere in the rev-range. Gas it in first and the front starts rising before the tacho has passed four grand.

Four Mikuni carburettors supply the unleaded to the 16-valve donk via a 19-litre fuel tank that accepts a magnetic tankbag readily.

Instrumentation is acceptable with both a large chrome-ringed speedo and tachometer. A long bit of straight road can get the speedo needle most of the way around its 260 kph dial. An extremely welcome addition that is not seen on enough bikes these days is the reliable and easy to read fuel gauge. The lack of a clock is always a pain in the bum however.

Cooling is taken care of by the well proven Suzuki oil and air cooling system that served the GSX-R series so well for many years and ensures the Bandit never gets too hot and bothered.

The 5-speed gearbox is as positive as they come and a sheer joy to use, just like the GSX-R 11 it comes from.

The clutch has a very smooth and progressive action that is very comforting when taking off from slippery intersections in the wet. Especially on a bike with so much low down grunt.

Final drive is via the normal chain drive set-up. Chain lubrication is convenient by the easy to use centre-stand.

Seat height is quite reasonable at 835mm and ground clearance is more than adequate at 130mm.

The seat is quite supportive for short to medium distances. When travelling longer distances it can prove to make the cheeks a bit tender. Around town this is not noticed at all, but when out on the open highway it does become a little bit of a discomfort. Some vibes through the pegs do not help matters when on the long haul. This again is only noticed when doing some serious straight distances without a break.

310mm discs with 4-piston calipers take care of the stopping duties up front. They are aided by a 240mm single disc out back which proves quite effective in pulling the 214 kilogram (dry) Bandit up in the shortest distance possible.

The suspension features preload-adjustable forks and a conventional monoshock rear end that is adjustable for both rebound damping and preload. These work very well for a bike so reasonably priced.

Handling is quite good with light steering and quite good feel for a bike of this class. Getting too excited on the exit of a corner will see the rear suspension struggle to provide traction. The upright bars and smooth power delivery make rear-end drifts out of tight corners quite easily controlled.

The front forks give the rider enough confidence to push the bike reasonably hard in to tighter corners. Riders that would push this bike over its limits should really be riding something a bit sportier.

Of course very serious cornering sees a bit of scraping happening, but you have to be sticking it in quite hard to provoke it.

A 4 in to 1 exhaust system exiting on the right hand side features polished down tubes and a brushed aluminium muffler. The exhaust system is quite restrictive and the addition of a good after-market muffler can add up to another 15 horsepower at the expense of a little bottom end power. 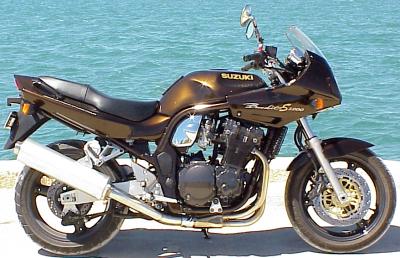 The Bandit is a great looking machine that has just the right amount of chrome to set it off. The shiny bits seem to be reasonably good quality considering the low purchase price.

Suzuki enjoys a truly awesome reputation for reliability with the 1200 Bandit. Many of the worlds leading motorcycle stuntmen choose them as their mount due to their incredible ability to handle quite extreme levels of abuse.

The upright bars and good mirrors make the Bandit a sensible mount for city commuting while still providing enough legs to cope with touring. It is hard to understand that a bike whose attributes are so sensible, also provide the ultimate in hooning for all of us stoppie and mono merchants.

Robbie Bolger uses 1200 Bandits in his stunt shows and swears by them. He chooses to use Bandits (which he pays for – Suzuki doesn’t give him them) even when other manufacturers have given him bikes for nothing. This goes to prove the hoonability and reliability of the Bandit.