V-Twins are becoming more popular these days. Ducati’s racing success with a V-Twin layout and the great sound that the configuration offers are the main reasons for the popularity of the V-Twin.

Suzuki, Aprilia, Honda & Buell all offer an affordable alternative to the Ducati if you are in the market for a sporting V-Twin.

The TL1000S, Honda’s VTR 1000 Firestorm, Ducati’s ST2/4 and Aprilia’s Falco compete against each other in this area of the market.

A Fuel injected 996cc liquid cooled 90° V-Twin supplies the power to the TLS. The same engine also powers the TLR but in that application 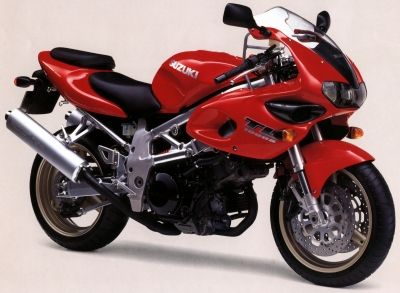 Suzuki produced an engine in a slightly higher state of tune. The TLS sacrifices the top end of the TLR for a greater mid-range.

That is not to say that the TLS is lacking in outright power. Around 110 ponies at the rear wheel is good enough to best the Honda VTR 1000 and Aprilia Falco by around 5 horsepower.

Suzuki have endowed the TLS with one of the best gearboxes I have ever had the pleasure of using. On this test I covered around 1400 kilometres of the best roads Western Australia has to offer and made thousands of gear-changes. A great gearbox can make such long twisty trips so much more enjoyable than a reluctant and notchy box. Suzuki always makes a great gearbox and the TLS has the best yet.

The Suzuki is fitted with a back torque-limiting clutch that works better than any other of its type I have used before. Change down early on some other bikes in this class and the back wheel will suffer the effects of a compression lock from the two big slugs, which will cause the rear to temporarily lock and skid. With Suzuki’s system this simply does not happen as the clutch automatically slips a little to prevent the rear wheel from locking. It works very nicely indeed.

Like most big sporting twins the TLS has quite an appetite for fuel, it is not quite as bad as the VTR 1000 Honda in this area however. The 17-litre tank allows for around a 200-kilometre range.

Seat height is a reasonable 835mm and ground clearance is generous at 140mm.

Instrumentation is along the lines of industry standards these days with a conventional speedo and tacho with LCD displays in the dials that provide the odometer, tripmeter & temp’.

Big 320mm dual-discs provide adequate stopping power up front and are clamped by 4-piston calipers. A 2-piston caliper at the rear operates a 220mm disc. The brakes are a match for the Aprilia RSV Mille and slightly better than the Honda VTR. They seem to take a little warming up to provide the best stopping power which is quite unusual these days.

43mm upside-down forks are adjustable for preload, rebound & compression damping. They work quite well, better than the VTR Honda but not quite up to the standard of the Aprilia. Now to the rear – hmm.

The same rotary damper rear suspension that works very well on the TLR is also fitted to the TLS. Slight differences in design and damping rates between the two provide very different suspension qualities.

The TLR works very well at the rear while the TLS we had on test did not. It was much too hard. I think that Suzuki may have made the rear quite hard to try and prevent unintentional monos when exiting corners. If this is the case, they definitely went a little too far. I tried to dial it out but couldn’t work out a good solution.

When getting the power down out of corners the back end simply does not work that well. The hard rear gives the tyre a very hard time. This only shows up when getting on the gas hard out of slower corners.

It also compromises a bit of touring comfort due to the fact that some quite hard shocks come through to the rider when traversing bumpy roads.

This all sounds very negative but the fact still remains that I had an absolute ball on the TLS and much prefer it to the Honda VTR 1000. The Aprilia Falco hasn’t quite hit the market here yet so I am not in a position to compare the relative abilities of the third option that will be available soon.

If I owned the TLS I would endeavour to improve the action of the rear suspension and fit some open pipes to enjoy the V-Twin note.

The TLS weighs in at 191 kilograms dry and comes with a two-year unlimited kilometre warranty for $15,390 + on road costs. 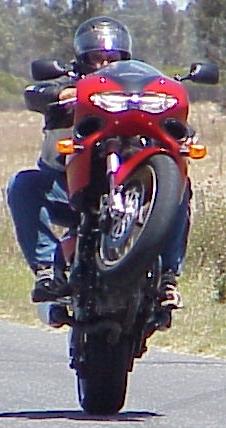 A 1,400 kilometre jaunt in two days such as I did on the TLS will show up any shortcomings and I was surprised to find just how much fun I had on TLS. The criticisms of the rear suspension aside I feel that the TLS is a great bike that is very enjoyable.

If I had to choose between the TLS and TLR I would opt for the sportier TLR, but when not going hard I think the TLS would probably make a better mount.

I had a memorable weekend of hard riding on the TLS that I wont forget in a hurry. It is a great bike, but if you can afford the extra cash I would also recommend trying Aprilia’s Falco.