Team Honda’s up and down weekend

Team Honda sent through their account of what was a very up and down weekend for the Motologic managed squad at the World Superbike weekend at Phillip Island.

Jamie Stauffer has taken the overall win for the first round of the Phillip Island Championship after winning Superbike Race 2 at the World Superbike Event yesterday.

Stauffer’s Team Honda Racing team mates, #34 Josh Hook and #1 plated Wayne Maxwell were involved in a very unfortunate crash in Race 2 which has left Maxwell recovering from a dislocated shoulder and Hook in hospital with breaks to his wrist, collarbone and C6 vertebrae.

The World Superbike Event began much as was expected by Team Honda Racing with the 2 Honda CBR1000RR SPs and the Motul Honda CBR1000RR recording consistent lap times in practice and qualifying to line up 1-2-3 on the grid for both Superbike races.

Race 1 saw a battle of the Hondas as Team Honda Racing took control.  Until the final lap it appeared it would be a golden start to 2014 for Team Honda Racing as all 3 Hondas strived for the win.  Unfortunately, Maxwell came off the bike on the final lap and Hook took the win, his maiden Superbike win with Stauffer close behind in 2nd place.

Hook was understandably encouraged by the Race 1 win and was looking to make it a clean sweep for the event going into Race 2.

Race 2 looked set to be a Honda battle once again amongst the Team Honda Racing trio as they took off from the starting line, but it was not to be.

The crash involving Hook and Maxwell happened on the first lap at the exit of turn 11 and their weekend was well and truly done.  The race continued however and Stauffer claimed the Race 2 victory and the overall win for Round 1 of the Phillip Island Championship.  “I am pleased to take the overall win for the event for sure although my thoughts now are with Josh in the hospital as it was a nasty crash.  Wayne was also injured so hopefully they both heal quickly.

Maxwell is keen to focus on recovering from his dislocated shoulder and move forward.  “That was definitely not the start to the year I had envisaged.  My shoulder injury is a set-back for sure, but I will focus on a strong recovery and move forward.  Josh broke a number of bones in the crash in Race 2 so I hope he can recover strongly and be back on track soon.”

Team Honda Racing Team Principal, Paul Free is somewhat lost for words.  “What can I say?  We won the round and that’s fantastic, but Josh is in hospital and Wayne is injured.  I can’t take anything away from Jamie and don’t want to gloss over his win.  He rode very well all weekend and was very consistent so well done to him for the Race 2 win and the overall Round win.  We are all thinking of Josh now and will be keeping in contact with his family as he recovers.  The weekend certainly ended on a positive note in terms of Jamie’s win, but we could not have anticipated Wayne not finishing both races, being injured and Josh ending up in hospital so we will take stock and regroup.  We do have another event very soon at Wakefield Park with the Australasian Superbike Championship so we need to stay focused and move forward.”

Round 1 of the Australasian Superbike Championship will be held at Wakefield Park Raceway, 14th – 16th March. 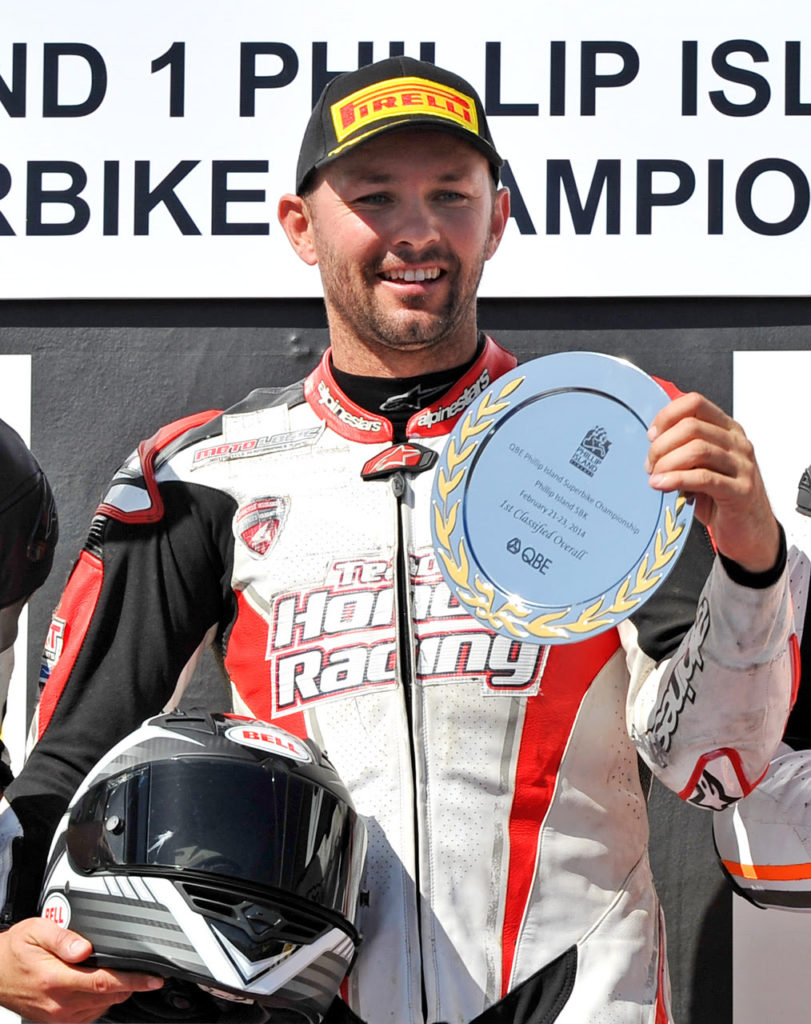 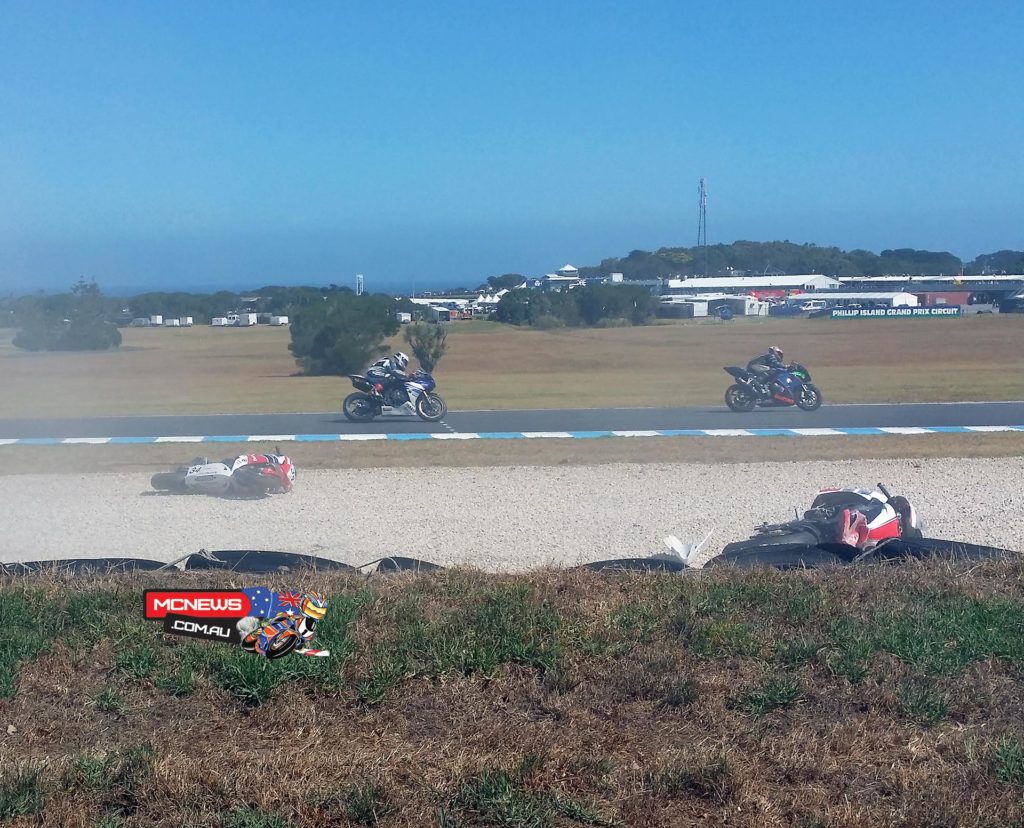 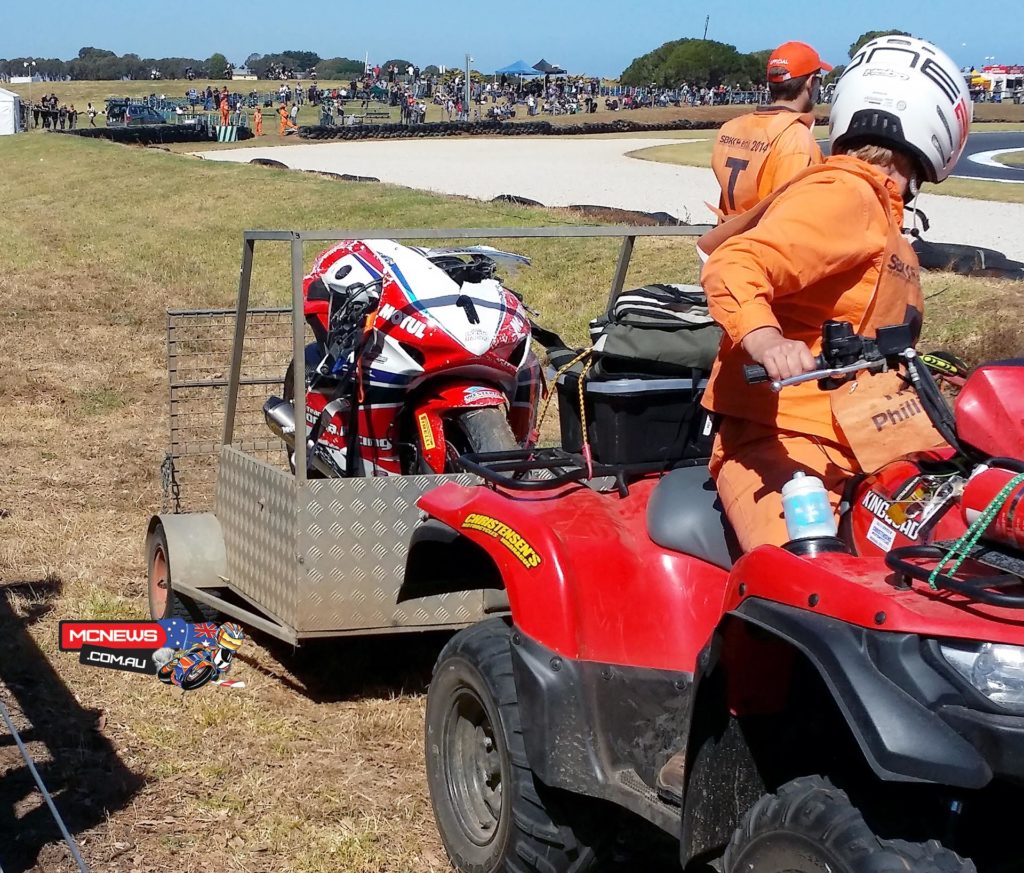 Yesterday this Bell helmet, my Alpinestars leathers and a lot of luck probably saved my life. I’ve got a fractured vertebrae in my neck, and broken wrist and collarbone. I’m going to be put of action for a short while, but it could have been a lot worse. Thanks to #bellhelmets and #alpinestars for making the best protective gear on the planet! I’ll keep you all updated on my recovery. Cheers. Josh 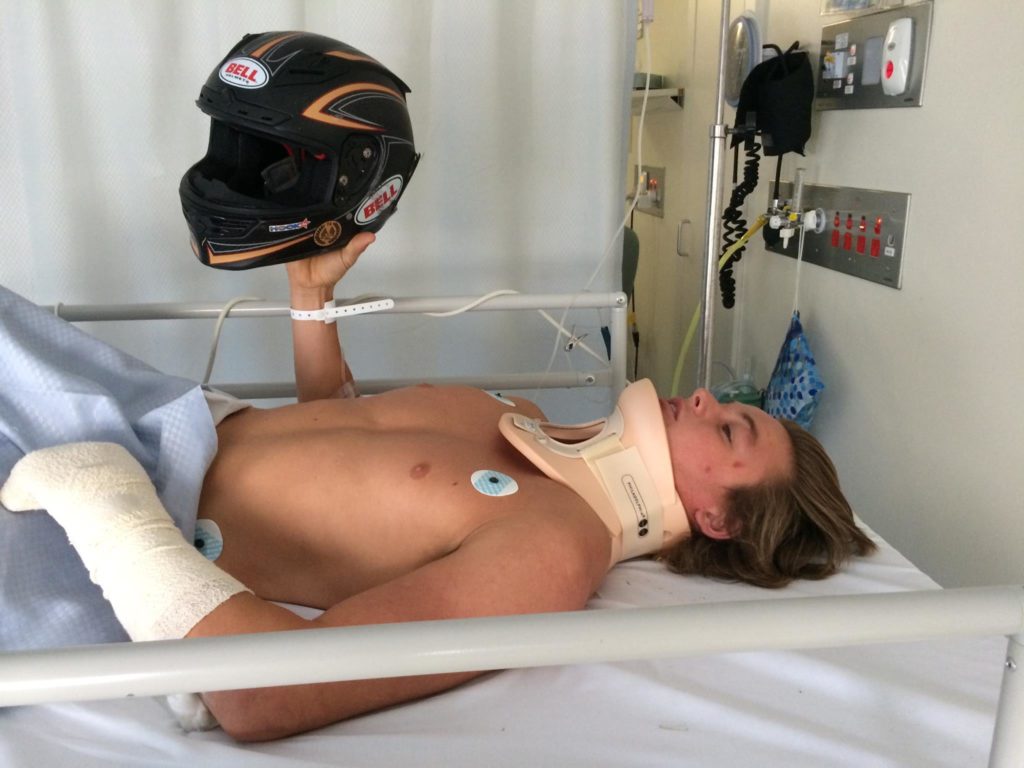 My start to the season has not gone to plan and it’s disappointing not finishing a race on the weekend.

The Saturday race saw Wayne loose the front over Lukey Heights whilst in the lead on the final lap.

On Sunday Wayne was then ejected from his Motul Honda CBR1000RR in an incident with teammate Josh Hook during the second Phillip Island Championship race of the weekend, dislocating his shoulder in a dramatic turn of events.

The crash, which saw race one winner Hook hospitalised with a broken collarbone and wrist, was Maxwell’s second in as many races upon return to Honda.

With a mammoth five-day test scheduled for Monday through Friday at Almeria in Spain, Maxwell has advised the factory-supported YART team that he will likely be absent altogether.

Planned flights to Europe this evening have been cancelled, however depending his pain tomorrow the 31-year-old isn’t ruling out a last-minute flight on Monday night.

“It’s YART’s first test of 2014, obviously my first test with the team, so if it feels okay tomorrow I might go. At this stage though I’ll give it a miss and aim for the official test at the end of March.

“Mandy [Kainz] said to me ‘that’s motorsport’ and at the end of the day it is, but just disappointing circumstances. Today I had nowhere to go and it’s happened to everybody, coming down through no fault of their own.

“It’s a short setback for me, the shoulder will heal, and fortunately Josh is okay. That is the main thing. I had heaps of speed, but I’m sure we were going to be competitive and we can bounce back.”

We can’t take a few things away from the weekend that look very positive for the remaining year ahead on the Motul Honda CBR1000RR.