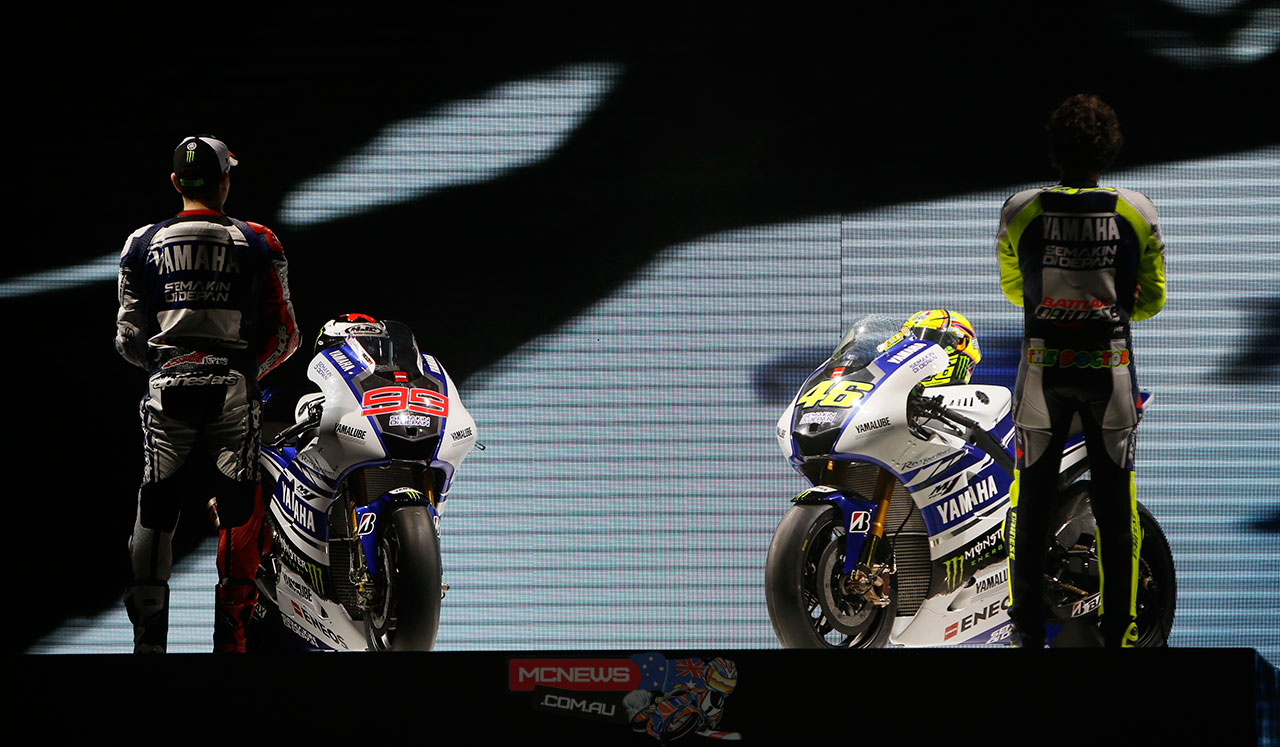 Yamaha Factory Racing stars Jorge Lorenzo and Valentino Rossi kicked off the new MotoGP season today by unveiling the 2014 Yamaha YZR-M1 live in front of nearly 4000 members of the Yamaha family at the 3S Dealer meeting in Indonesia.

The two-day visit saw both riders engage in a number of activities for their first official outing of 2014. Yesterday Jorge met with a number of local media before heading off to take part in a soccer game with a team of Lorenzo fans and members of the Yamaha community.

Jorge and Vale wrapped up the day by recording a local TV show and shooting a Yamaha TV commercial before heading to the airport and saying goodbye to Indonesia once again.

Jorge Lorenzo – “It’s always nice to come into a sunny country with happy people, especially Indonesia, a country that gets crazy about MotoGP. Both Vale and myself have a lot of fans. Everyone recognises us in the street and gives us a lot of love so it’s a good place to promote Yamaha.

“Every year this Asian market gets more and more important so our visits here increase. This time we decided to do the launch here, in front of thousands of Yamaha people.

“I like the new bike a lot, it’s very smart and elegant with more white. It’s not just the colour though; I’m excited to see what’s inside the bike in Sepang!

“My expectations for this season are very high. This winter I had an operation to take out the metal plates in my shoulder so I’m a bit lighter but I’m also a bit fatter after Christmas! I am training hard to lose some kilos and I will try to start the season well like last year and be straight onto the podium. This will be important to get points and gain confidence to keep going through the season. Our rivals will be tough but I think if we’ve improved in some areas then we have a good chance to win the title again.

“When you are fast and winning races all the big factories want you, this is normal. I have to clarify that there is no truth in the rumours that there is a contract with another manufacturer and I would like to start negotiating as soon as possible for my future with Yamaha. My dream is to retire after my career as a Yamaha rider. If our bike is even better this year then it will be easier!”

Valentino Rossi – “It’s always great to come to Indonesia. The Indonesians are the best fans in the world, with a lot of passion for MotoGP and the Yamaha Factory Team, even though they have no races in their country. Yamaha Indonesia plays a big role in Yamaha’s global business and I truly hope that Jorge’s and my presence here gives a further boost to their local business. This morning I had the pleasure and the honour to spend some time with Mr. Joko Widodo, Governor of Jakarta, and I could not have expected any better welcome to my arrival in Indonesia.

“This season is very important for me and the fact that we officially start the season here in Jakarta makes it even more special. I can’t remember any previous unveiling by Yamaha made outside Europe, so today’s event was special for several reasons. Yamaha deliberately decided to offer the Indonesian dealers the chance to host the unveiling of the 2014 M1 during their big annual meeting here in Jakarta and this is another sign of the increasing importance of the SE Asian market for the global business. I truly hope to be able to race here again, very soon, before it’s too late!!

“We unveiled the new livery for 2014 today; it’s very nice, very elegant and has more white than last year. It’s still very much in the Yamaha Factory style and I like it a lot.

“The expectations for the coming season are very high. My target is to try and do better than last year, be more competitive and fight for the podium every weekend. I am sure our bike will be very competitive again. It was already very good last year and Yamaha engineers were able to develop it further through the season therefore I expect a lot from my new M1 and I am sure it will get even better during the season.”

Lin Jarvis – “I am very happy that I was able to attend the Yamaha Motor Indonesia Dealer Convention here today with our President Mr. Yanagi, Jorge, Vale, and Tsuji-san to give the Indonesian dealers an exclusive preview of our new colours for the 2014 season. The Indonesian market is the biggest in the world and MotoGP is enormously popular here so I really hope we can come here to race in the future.

“I would like to thank our hosts for making us so welcome and for their invaluable support to our MotoGP project. We now look forward with impatience to the first Sepang test in just over two weeks from now to start our 2014 title campaign.”