The mad skater has been at it again

The Fuchs Kawasaki’s Andrew Pitt assisted German inline skater, Dirk Auer, to a new world speed record in Germany on Sunday. Auer, who was dragged behind a Kawasaki ZX-12R by the reigning World Supersport Champion, reached a speed of 291.8Km/h, beating his own inline skating world speed record by more than 20Km/h.

The record attempt took place on a cordoned off section of the B3 autobahn between Darmstadt and Eberstadt, with a massive crowd turning out to cheer Auer on to his 300Km/h target. Unfortunately for the skater, the road conditions conspired to make this target impossible to reach, despite a number of high-speed runs behind the 217hp, Michael Lohmann prepared, ZX-12R.

‘I thought I’d got the easy job, but it turned out to be a lot more difficult than I expected,’ said Pitt, who returns to World Supersport action at Oschersleben on 1st September. ‘We were running in one lane of the autobahn and the crowd were lining the route in the other. The road wasn’t perfectly straight and we were getting quite close to the barrier separating us from the spectators as I tried to find a line through the turns that allowed me to keep the throttle pinned and the speed up.’

After a number of attempts, and a few tweaks to the bike, Pitt and Auer eventually tripped the Police operated speed trap at 291.8Km/h.

‘The speed trap was located right at the end of the longest straight section on the road, but if you went through at full chat then it didn’t leave you much of a braking area in which to get the bike stopped. In the end I just kept the throttle pinned until I saw the red flash as the camera went off on the speed trap and then grabbed a big handful of brakes,’ continued Pitt.

‘We were aiming for 300Km/h and, if we’d had a bit more of a straight to work with, I reckon we could have done it. The bike was certainly more than capable of dragging Dirk to his target speed, but the road turned out to be the limiting factor.’ 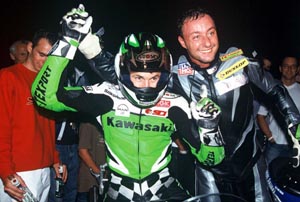 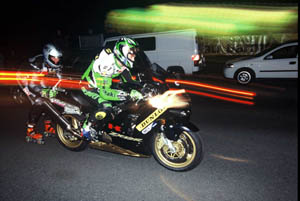 Colin Edwards - 2002 World SuperBike Champion The Year That Was

Rossi - A little more of an insight to the World Champion

Alex Rins on his time with Suzuki and 2020 aspirations