by Admin2
in Motorcycle News, Motorcycle Racing, MXGP, Videos
A A
Share on FacebookShare on TwitterShare

The historic Uddevalla circuit hosted the 16th round of the 2017 FIM Motocross World Championship today against the backdrop of thousands of fans on the hills surrounding the track. Finding Swedish success was Team HRC Tim Gajser, and in addition to the demanding circuit, the changing weather conditions challenged riders and teams alike from goggle to tire choice.

Team HRC’s Tim Gajser had missed the podium for several rounds before last weekend and today he not only found the podium but did one better when he took the overall with 1-2 finishes. The reigning champion started race in the top 5 while his HRC teammate Evgeny Bobryshev took the Fox Holeshot.

Gajser and Bobryshev battled shortly but Gajser made it by the Russian along with Red Bull KTM Factory Racing’s Glenn Coldenhoff. Leading the GP that he won in the last visit Febvre made a mistake and fell out of the lead and remounting in 12th.

On lap 4 Bobryshev lost 3rd to Paulin and 5 laps later lost 4th to Herlings who had finally found a way around Desalle. Herlings and Paulin both passed Coldenhoff and then Bobryshev did the same. One lap later Herlings took over second from Paulin.

On the last lap a mistake dropped Bobryshev from 4th to 7th letting Coldenhoff back into the top five. At the finish Gajser beat out Herlings by over 9 seconds with Paulin 3rd then Desalle, Coldenhoff, and Febvre who worked his way back from 12th to finish 6th.

Race 2 started similar but with a Holeshot for Febvre just ahead of Herlings, Gajser, and Paulin. Gajser passed Herlings quickly but a few laps later a mistake of Gajser let the Dutchman through.

Herlings while charging toward the leader Febvre had a bike issue which immediately ended his race. Gajser retook second position and set his sights on the #461. The Slovenian and the Frenchman battled for several laps coming extremely close at times.

Behind the front two was Paulin in a race of his own well ahead of Desalle and Coldenhoff. Cairoli struggled again in race 2 starting in 9th and only making his way to 7th by the finish. At the checkered flag Febvre won the race ahead of Gajser to secure second while the HRC rider took the overall win.

“It was a good weekend overall. I had almost two holeshots. In the first moto I was leading from the first lap but I crashed on my own and then got hit by Max Nagl once I was back on my bike, so I crashed again. I still came back to sixth, so I know my speed was good. I just feel that I should have won the first race, but in the second race I led every single lap and won. I am happy to be back on the podium, I want to thank my team and also all of my sponsors that still believe in me.” 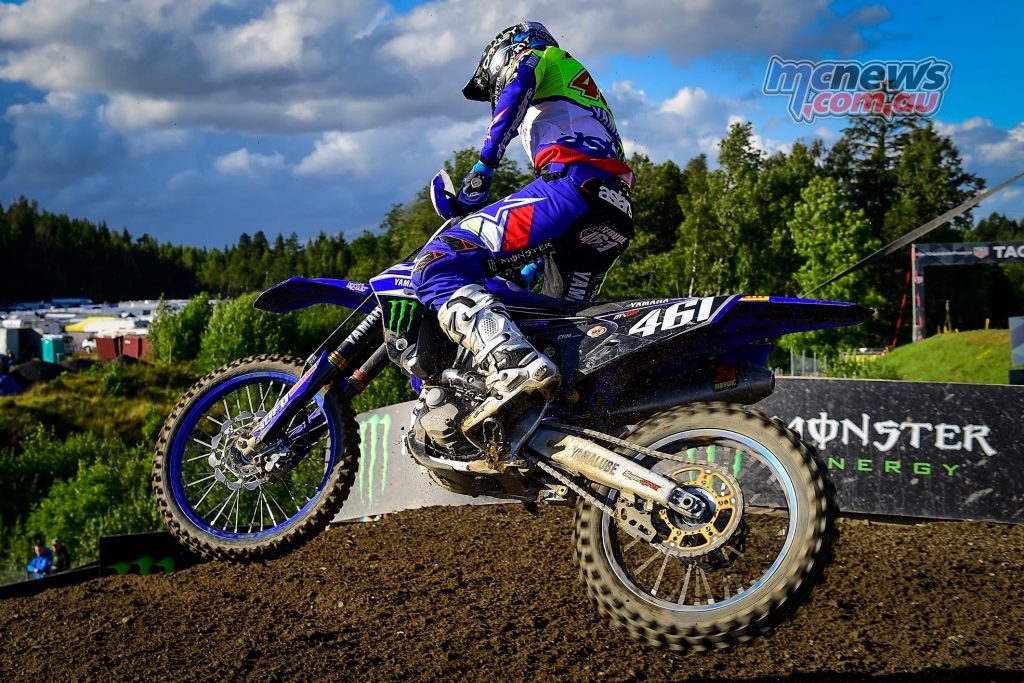 Tim Gajser’s win was his third this season but the first since Leon 12 rounds prior.

“It is good to be back on the top step after quite a long time! We have been working so hard for this, we have had some bad weekends and some bad races but we are now getting better and better. I am grateful for everything my team have done and I just want to say a huge thank you to everyone around me. My goal for the end of the season is now to do try and win some more GP’s to finish the season strong. I knew in the second race that if I got second I would take the overall. I made a small mistake at the beginning of the race and then Jeffrey passed me for second. Then, he had a problem with his bike which allowed me to get back into second and catch Romain. It was tough to pass him so the last couple of laps I stepped back a little bit as I knew I had done enough to take the win.” 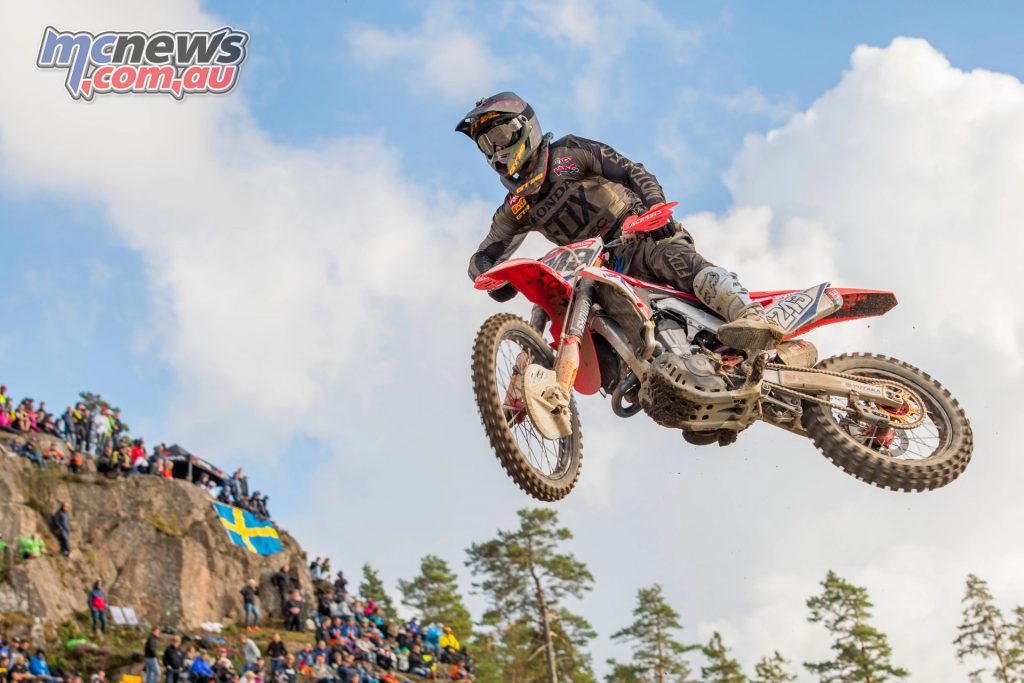 “We had a good weekend in Sweden. With the rain falling on Saturday and Sunday morning we were faced with changing track conditions. It took some time for me to get a good feeling but once this happened I was able to get a good speed and keep that throughout both motos. In the opening moto I got off to a good start and after making some mid race passes I managed to get third. Then in the second moto I lost some time right after the gate dropped, but my bike was so good that I could remain inside the top five going into the first corner. It was tough to remain fast on this track and you had to rely a lot on a good technique. I pushed hard for another third-place result and I was happy to earn one more podium result.” 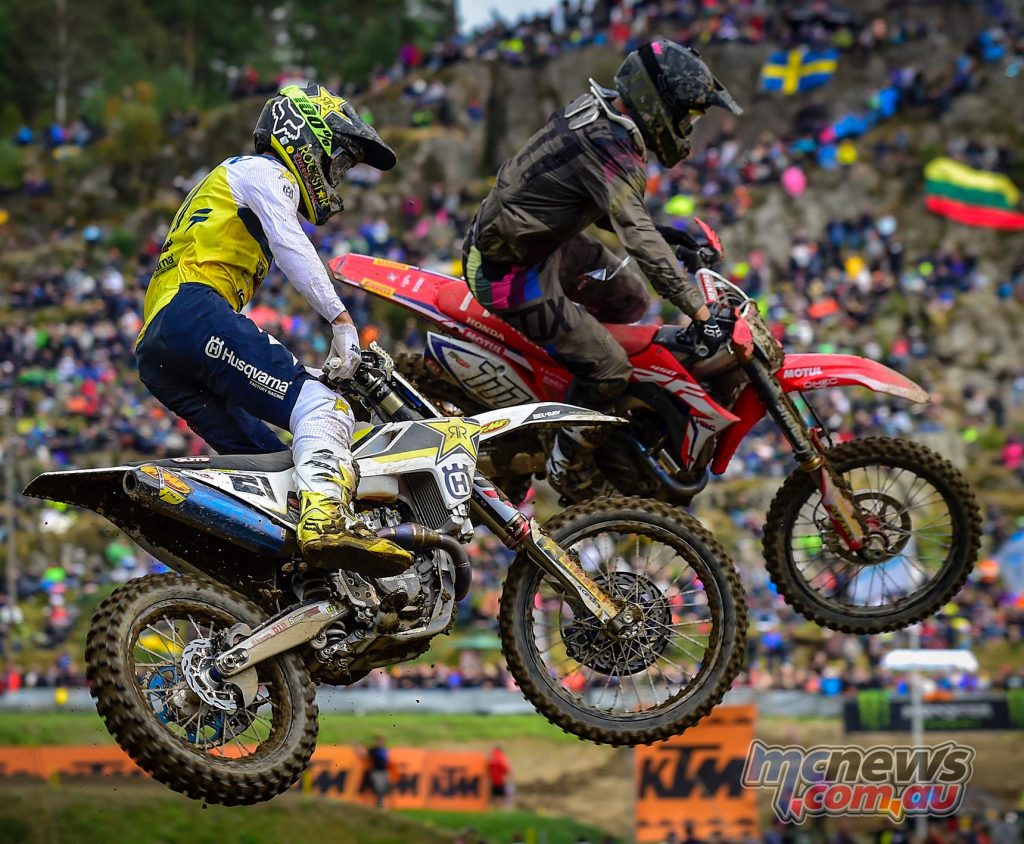 “This weekend was OK. It is important to look for the championship and I don’t care too much about single races. We are nearly at the end and it is easy to make a mistake and hurt yourself and we really want to bring the title back to KTM. I’m really looking forward to that and I don’t have any pressure to make it happen quickly. We are experienced and can deal with some average results like today. This was never one of my favourite tracks but I have won here six times – equal with Stefan Everts – but I always arrived before without championship pressure and more in ‘attack’ mode. I made some mistakes today and we struggled a little bit. Overall it was OK to finish here safe and healthy for the next one.” 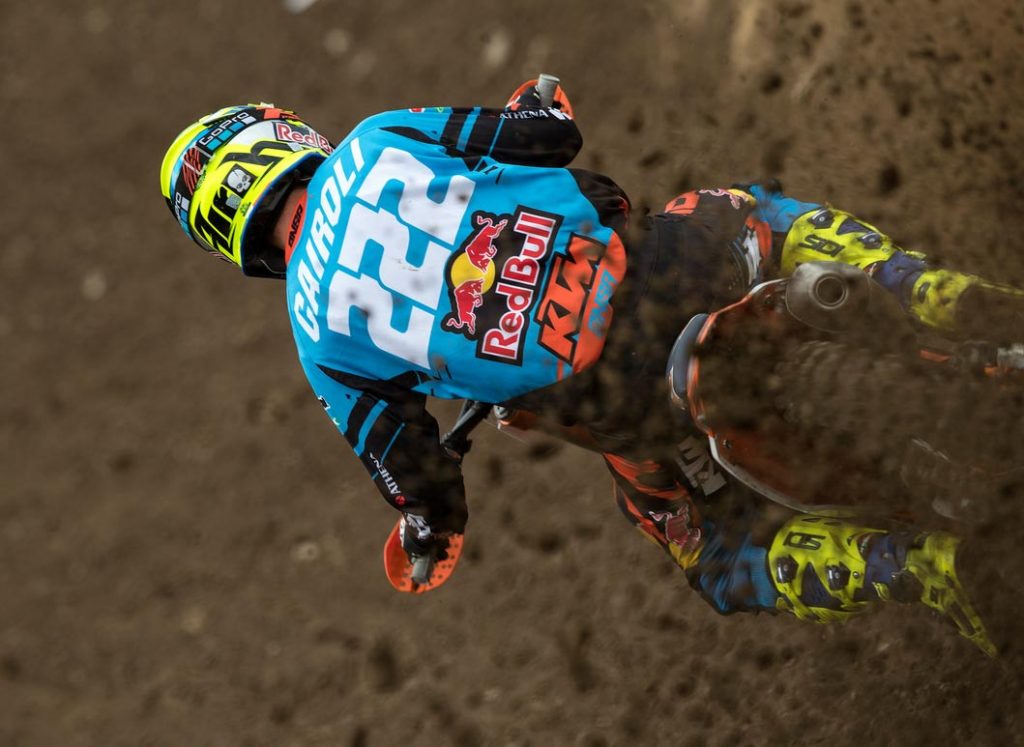 “The first race went really good for me, I got the holeshot which I was really pleased with. I ended up in fourth and was controlling the race comfortably from there but in the last lap it rained and I had used all my tear-offs so had to take off my goggles off. My vision was bad so I went off the track and got stuck in the mud! Second race was worse, I didn’t have a good start but then I had a little collision with Cairoli and then went down. I managed to come back to tenth place. I can take some positives from this weekend so that is good, I had the speed but it doesn’t seem to be coming together for me at the moment but I am trying to push myself.”

“It’s been a struggle all weekend with my riding but it turned out quite good today actually. My riding was much better, and I was making good passes despite getting stuck behind Jeremy van Horebeek. I couldn’t make the pass and I made mistakes when I was changing the lines, which allowed Antonio Cairoli and Romain Febvre to pass me and that’s why I finished in 10th place. The second moto I rode even better, I didn’t have the best start but after a couple of laps I made some good passes again and got into sixth place. Everyone was there, not too far in front but a few silly mistakes dropped me back from that unfortunately. My riding was good though, I was happy with that, and now we are going to build upon that to prepare myself for the USA, and take another step forward.”