by Admin2
in Motorcycle News, Motorcycle Racing, Supercross
A A
Share on FacebookShare on TwitterShare

The Monster Energy AMA Supercross made its annual visit north of the border on Saturday night for its lone international stop in Canada’s largest city.

As the 450SX Class field stormed down the start straight to start the Main Event it was RMATV/MC-WPS-KTM’s Blake Baggett who emerged with the holeshot, edging out Tomac and RCH/Yoshimura/Suzuki Factory Racing’s Broc Tickle.

Tomac wasted little time in making a move to the front and was able to get by Baggett at the end of the first rhythm lane. Behind him, Team Red Bull KTM Factory Racing rider and championship leader Ryan Dungey was mired outside the top 10, eventually working his way up to ninth by the completion of the opening lap.

With a clear track ahead of him Tomac started to pull away from the field and proceeded to check out on his rivals. Baggett crashed on Lap 4, giving up second to Tickle and third to fellow RMATV/MC-WPS-KTM rider Davi Millsaps, before remounting in fourth.

All eyes were on Dungey as he marched his way through the field, patiently passing riders with every opportunity and breaking into the top five on Lap 5.

Baggett fought his way back into podium position as the race approached the halfway point, passing Millsaps for third on Lap 8. Not long after that Dungey took over control of fourth and set his sights on Baggett in third.

Ryan Dungey to race opening round of AMA Pro Motocross

With Tomac more than 10 seconds ahead of the field, Dungey moved into podium position past Baggett on Lap 11. He continued to gain ground by logging the fastest laps on the track and soon began a fight for second with Tickle.

After pacing the Suzuki rider for a couple laps Dungey made the pass on Lap 16, to the delight of the crowd.

Tomac went unchallenged en route to taking the checkered flag, crossing the line 14.2 seconds ahead of Dungey for his fourth win in six races. Tickle held on for third, earning his first career podium finish in the 450SX Class. 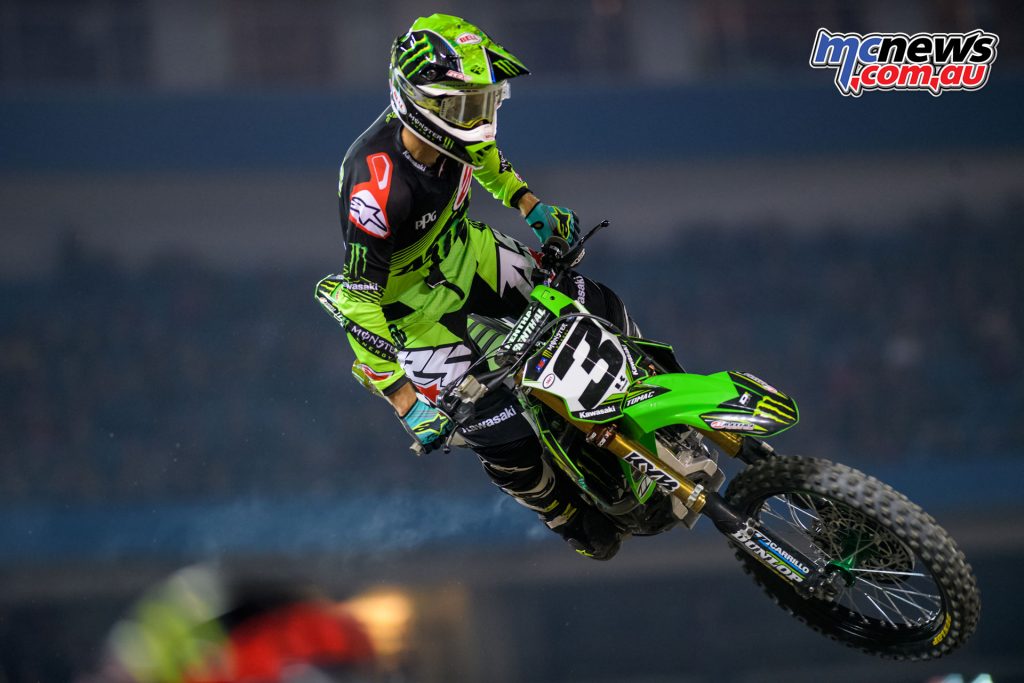 “The track was gnarly. It really broke down, so it was important to be consistent and ride smart. The long start let the Kawasaki open up and put us in a good position out of the gate, which was key. We had a good time here [in Toronto] and we’ll see what we can do [moving forward in the championship]. We have eight rounds left with a lot of good tracks ahead. I’ll just keep hammering.”

Dungey’s impressive come-from-behind effort was crucial to his lead in the championship standings, which now sits at 24 points over Tomac, who moved into second.

“It was a very bad start. I got out [of the gate] and just spun [the tire]. I needed a good jump [to contend], but it didn’t happen. I tried to pick off as many guys as I could and did that one by one. To be in second place [after all that] I can’t be mad at all. I didn’t think I’d get there with the way things started. Eli [Tomac] was there. He was out front and made it happen. We need to make it tougher on him. We’ll work on our starts and come back fighting next weekend.”

Savatgy began his attack for the lead almost immediately and was able to get by Ferrandis, only to have the Frenchman fight back and reclaim the top spot in the whoops.

Ferrandis went on to lead the opening lap, but the pressure from Savatgy continued. The Kawasaki rider passed for the lead a second time on Lap 1, but again gave the spot back to Ferrandis a short time later after the two made slight contact.

The battle out front allowed the top five riders in the race to all sit within bike lengths of one another, with Osborne third, Monster Energy/Pro Circuit/Kawasaki’s Adam Cianciarulo fourth, and Yamalube/Star Racing Yamaha’s Colt Nichols fifth.

On Lap 4 Savatgy mounted another challenge for the lead, successfully making the pass and opening a slight gap. A short time later, Osborne moved past Ferrandis into second and set his sights on the lead.

On Lap 5 Ferrandis went down while running third, allowing Cianciarulo to move into podium position. On the following lap, Osborne took advantage of a bobble by Savatgy to assume the lead just before the finish.

He proceeded to set the fastest lap of the Main Event and established a comfortable lead he would continue to extend.

While running second, Savatgy crashed after misjudging a jump on Lap 14. That misfortune allowed Cianciarulo to move into second, while GEICO Honda’s Christian Craig slotted into third after misfortune befell Nichols. Savatgy remounted in fifth.

Osborne built his lead to over 10 seconds in the closing stages of the Main Event and cruised to his second straight win. He crossed the line 9.1 seconds ahead of Cianciarulo, who made his first trip to the podium since his rookie 2014 season. Craig grabbed his first podium finish of the season in third.

“The track was tough tonight, but I had a good feeling from the start of the day. I’m enjoying riding right now and I have the confidence to come out here and do well. It’s an amazing feeling, and the pressure is going to build week in and week out [as points leader]. To get my first win last weekend and back it up here [in Toronto] is awesome and ensures we avoid any sort of slump.”

Osborne added to his lead in the Eastern Regional standings, which stood at just two points entering the night, and now sits 12 points ahead of Savatgy, who finished sixth.

Troy Lee Designs/Red Bull/KTM’s Jordon Smith, who finished seventh, sits in a tie for third with Cianciarulo, with both riders sitting 18 points out of the lead.

The 2017 Monster Energy Supercross season continues next Saturday, March 11, for the 10th round of the championship at legendary Daytona International Speedway in Daytona Beach, Florida.