by Trev
in Motorcycle News, Touring
A A
Share on FacebookShare on TwitterShare

There might not be any TT this year (2020) due to the plague, but I still thought it might be a great time to revisit my epic trip to the TT two years ago, 2018, and re-live a motorcycle journey that took in a fair bit of Great Britain, Wales, Ireland and of course, the Isle of Man itself. I hope you enjoy the ride…

After my uncle Mick cooked us a couple of bacon sangas for breakfast we hit the road out of Torpoint via a stretch of bends known by locals as the Torpoint Twisties. This is apparently a regular haunt of weekend warriors in the south of England, and one that has claimed more than a few lives.

We then wound our way up in to Dartmoor National Park in Devon which quickly opened out into windswept open moorlands. This landscape was a little reminiscent of the highest and barest plains in the Australian high country, such as the section above Kiandra in the Snowy Mountains. But somehow appearing as even more barren despite obviously being more lush, as much as that seems a contradiction in terms…

There is not a lot up there apart from wildlife, and that includes horses and ponies roaming wild along with thousands of sheep who, for the most part, seem pretty road smart. It is quite enjoyable though and I would recommend a detour through the moors if you get a chance when visiting.

Various bends open out to new vistas or a fresh surprise, such as a pub appearing from the middle of nowhere that we happened upon at Two Bridges.

Ancient tracks that have been made into roads wind their way to various places such as the Bronze Age settlement of Grimspound. The remnants of which still remain some 3000 years later in the shape of the base stones of long gone roundhouses still clearly evident in the landscape.

A sinuous and twisty single lane of blacktop provided a diversion to Lustleigh for lunch. A beautiful little village of 600 people that seemingly thrives primarily on tourism. 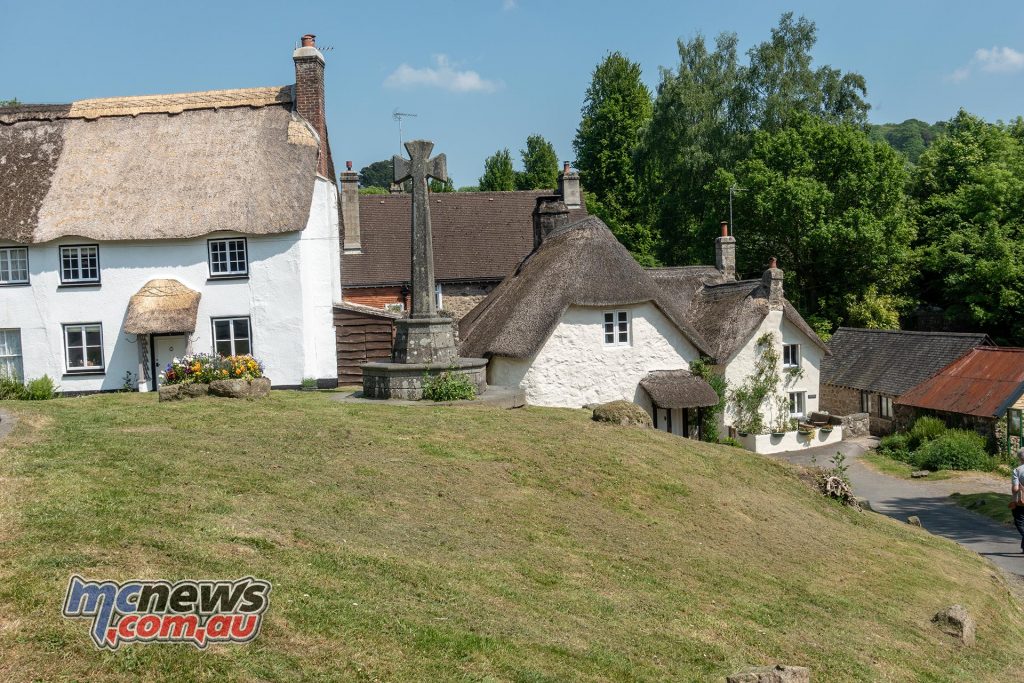 We then made for Canonteign Falls only to find that it had opening and closing hours, and that we were a little bit too late to make the cut off to be allowed in to the walking tracks that lead to the falls.

Thus back on the road it was to head out of the moors and skirt above Blackdown and Mendip Hills before bypassing Bristol then crossing the River Severn and up into Wales. This was now mainly highway running thus I dialled in the softer suspension set-up on the Explorer 1200 and just enjoyed the scenery.

After leaving the highway we then headed up towards the Brecon Beacons to take up our digs at an AirBnB in the impossible to pronounce Ystradgynlais.  The name of the AirBnB itself, ‘Plas Cilybebyll’, also featured the traditional Welsh language naming that appears on almost every street sign in Wales, alongside the regular English nomenclature, as they strive to keep their native Cambrian language alive and in popular use.

A 14th century Manor House, Plas Cilybebyll was just amazing. The AirBnB lodgings were on the adjacent old bakehouse which while maintaining the outwardly old world charm, also houses all the mod-cons inside.

This would be our digs for the next three nights and what absolutely bloody amazing digs they were.  After arriving late in the evening we headed to a local pub for dinner then brought some grog and groceries on the way home.

We simply cooked up in the well appointed kitchen and enjoyed drinks in the main living area, a room that I liked and enjoyed more than any room I have ever spent time in. Yes we paid for it, and thus I am not just talking up a journo freebie.

The hosts were brilliant, the place comfortable and well appointed, but also with a little something else so rarely found, but hard to put a finger on. It made quite an impression. When I first wrote this I stated that next time I find myself in Wales I will stay at Plas Cilybebyll again, unfortunately though the place has now been sold and the cottage we stayed in no longer available for rent.

Check out this video of Plas Cilybebyll and surroundings

I will detail the Triumph Adventure experience in part five of the tales that detail this epic journey which then heads across to Ireland, before ferrying to the Isle of Man for the TT and then back across to England’s Lake and Peak Districts. Stay tuned…