ASBK Finale getting underway at Winton

Two days of testing at Winton ahead of the final deciding round of the 2016 ASBK Championship wrapped up on a sunny afternoon last week at the predominantly flat 3.0km circuit situated near the north central Victorian town of Benalla.

Both men bounced back from their misfortune on Thursday to take their places in the sun at the top of the respective Superbike and Supersport timesheets.

In the Superbike ranks Herfoss was clearly the dominant force. The Goulburn born 28-year-old was constantly in and out of the pits chasing fine set-up tweaks with mechanic Shaun Clarke.

They found something in the final session which saw Herfoss not only be the only man to drop in the 1m20s, but to underline his dominance he put together a seven-lap string of them on the #17 Honda Fireblade SP, the best of which was a 1m20.405 on the fifth lap that stint. The fastest ever lap around Winton on a motorcycle. Ride that lap with Troy Herfoss in this onboard video.

Some faces that we had not seen around an Australian pit garage for quite a while also with Josh Waters throwing his leg over a Vplates sponsored Yamaha YZF-R1 put together by Steve Cisco. Steve Mudford was assisting with suspension development while Josh’ younger brother Brodie was also swinging the spanners. Jordan Coote has put the team together with a view to testing the waters, pun intended, at the ASBK finale and also the MotoGP support races before any plans are bedded down for 2017.

Waters improved steadily throughout the day and closed the session out with a best of 1m21.437, three-tenths ahead of Jamie Stauffer.

Fourth quickest was Mike Jones on the Desmosport Ducati who had half-a-second breathing space over Tumut’s Brayden Elliott.

Robbie Bugden was present along with the BCperformance squad which also included Ben Burke on another ZX-10R and Kyle Buckley on a ZX-6R in Supersport.

Bugden was sixth quickest but with the team running on the Dunlop control tyre used in the FX-ASC series they normally contest did not offer up the same grip levels that we have seen the open tyre rule in the ASBK brought to bear by both Dunlop and Pirelli. The squad will not take part in the ASBK finale at Winton this weekend.

While the appearance of Wayne Maxwell as seventh on the sheets might raise a few eyebrows the truth of the matter is that Wayne was there by himself on a 2014 model YZF-R1 and was simply just turning a few laps. While probably keeping an eye on what the competition got up to at the same time. Thus nothing can be read into the form of the current ASBK Championship points leader ahead of this weekend’s championship finale, which gets underway today at the Winton circuit.

Yamaha tested here as a team and with other YRD supported riders a week earlier, and thus whilst not participating in this week’s session have had plenty of time to dial themselves in ahead of the championship decider.

While early indications suggest that Herfoss, Crankt Protein Honda and Pirelli might have the ideal combination in the dry, forecasts suggest that the Winton circuit will be under a deluge come Sunday. This could turn the tables considerably as historically Dunlop has proven to have a better wet weather tyre, although Pirelli have made some advances in that quarter this year.

Between 20 and 40mm of rain is expected on Sunday, with the forecast below based on 9am as the start of the day, one can only hope that the vast majority of that participation does not fall until evening.

Of course, either way, with a seven-point buffer over Herfoss, series leader Maxwell can simply shadow his nemesis home in each race in order to regain his ASBK crown.

Glenn Allerton has been flying under the radar somewhat this season, but has been quietly racking up strong points at every round and is right in the mix with those two, has Allerton been saving his standout performance for last…..?

Will Mike Jones get back on top of the Ducati and split the championship leaders and affect the outcome of the championship…? Or will Cru Halliday come back to the fore…?

Not to forget Josh Waters also being in the mix for the first time this season…. Daniel Falzon could be strong…. Superbike rookie Brayden Elliott could break through…?  Beau Beaton and the Ducati can never be ruled out of a podium chance…

All three chief protagonists, Herfoss, Maxwell and Allerton, will be walking somewhat of a tightrope throughout the weekend as one small mistake will be all it takes to see a seasons work gone in an instant. May the best man win!

Troy Herfoss and Jamie Stauffer talk ahead of the season finale

Sam Clarke did a race stint late in the day and the sandgroper set the fastest Supersport lap of the test on the final lap of his 18-lap race simulation, a 1m24.5.

Mark Chiodo had been at the top of the timesheets before that final session but the young Victorian spend plenty of time beneath the Triumph Daytona and was clearly frustrated at the amount of spills he had incurred.

Callum Spriggs was chasing front end grip on the Cube Racing Kawasaki and ended up third on the timesheets just ahead of Ted Collins and Robbie Menzies. 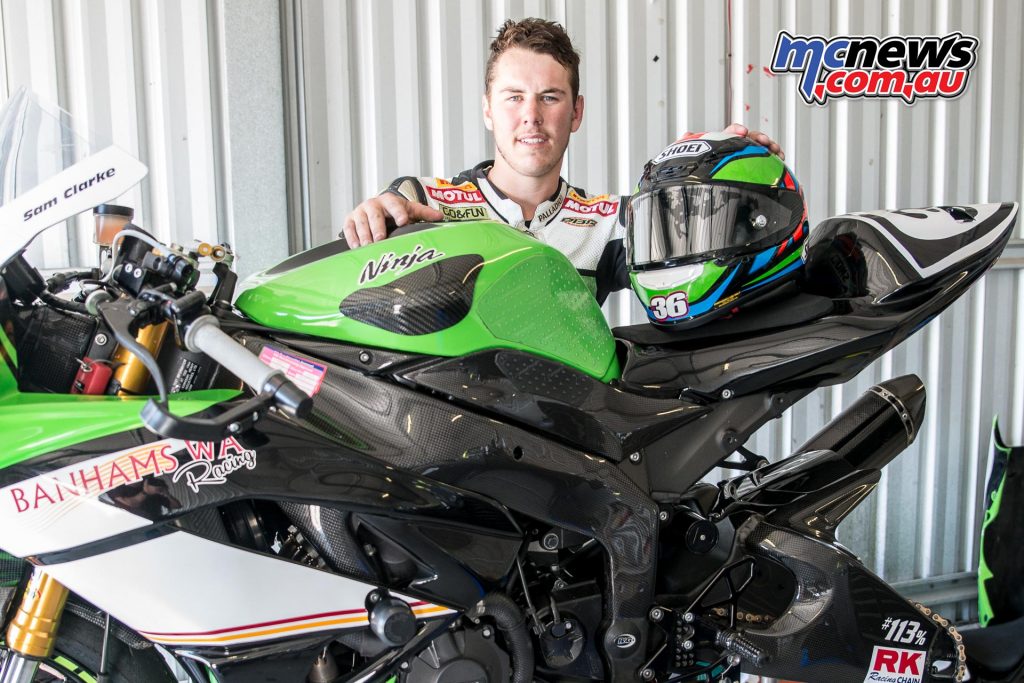 In the combined session with Moto3, YMF R3 Cup and Production competitors, it was the two Moto 3 machines of Dylan Whiteside (1:33.115) and Locky Taylor (1:33.298) who concluded the test day today with the fastest times first and second respectively.

Kawasaki mounted Cube Racing supported Tom Toparis (1:34.047) was fastest in the Production class times, while Jack Mahaffy (1:36.078) was the fastest Yamaha R3 machine. Douglas Bloomer was once again the quickest Club Challenge competitor on track today with a time of 1:33.389.

The 2016 Yamaha Motor Finance Australian Superbike Championship presented by Motul Pirelli, competitors will put it all on the line at Winton Motor Raceway this September 30 – October 2.